Iranian protesters successfully planned anti-regime demonstrations in at least 21 Iranian cities in 17 provinces on October 1 despite regime censorship. Protestors had announced plans over the past few days for protests on October 1 as CTP has previously reported.[i] The successful coordination of these demonstrations despite internet restrictions suggests that protesters—specifically university students—have found ways to organize.

These protests pose a serious and increasing threat to the regime as their grievances resonate across a growing range of Iranians. These protests now include many marginalized minorities, merchants, students, and the urban elite.

Protesters have found secular martyrs around whom to rally. Mahsa Amini is the most prominent symbol of this movement, especially among social media users.[ii] Protesters have chanted slogans from a viral Iranian protest song titled “Baraaye,” which lists popular grievances against the regime.[iii] State security services arrested the author of this song, Shervin Hajipour, on September 29.[iv] These individuals provide resonant symbols for the protesters similar to how protesters rallied against the regime killing of Neda Agha Soltan during the 2009 Green Movement when Iranians took to the streets to protest the fraud-plagued reelection of then-President Mahmoud Ahmadinejad.[v]

Supreme Leader Ali Khamenei remains absent and did not make a public appearance or statement on October 1. A Persian-language social media account tweeted on October 1 that Khamenei will visit Law Enforcement Command (LEC) facilities in the coming days.[vi] The LEC is Iran’s premier internal security service and police force. The regime has used the LEC extensively throughout Iran to crack down on the ongoing, anti-regime protests. 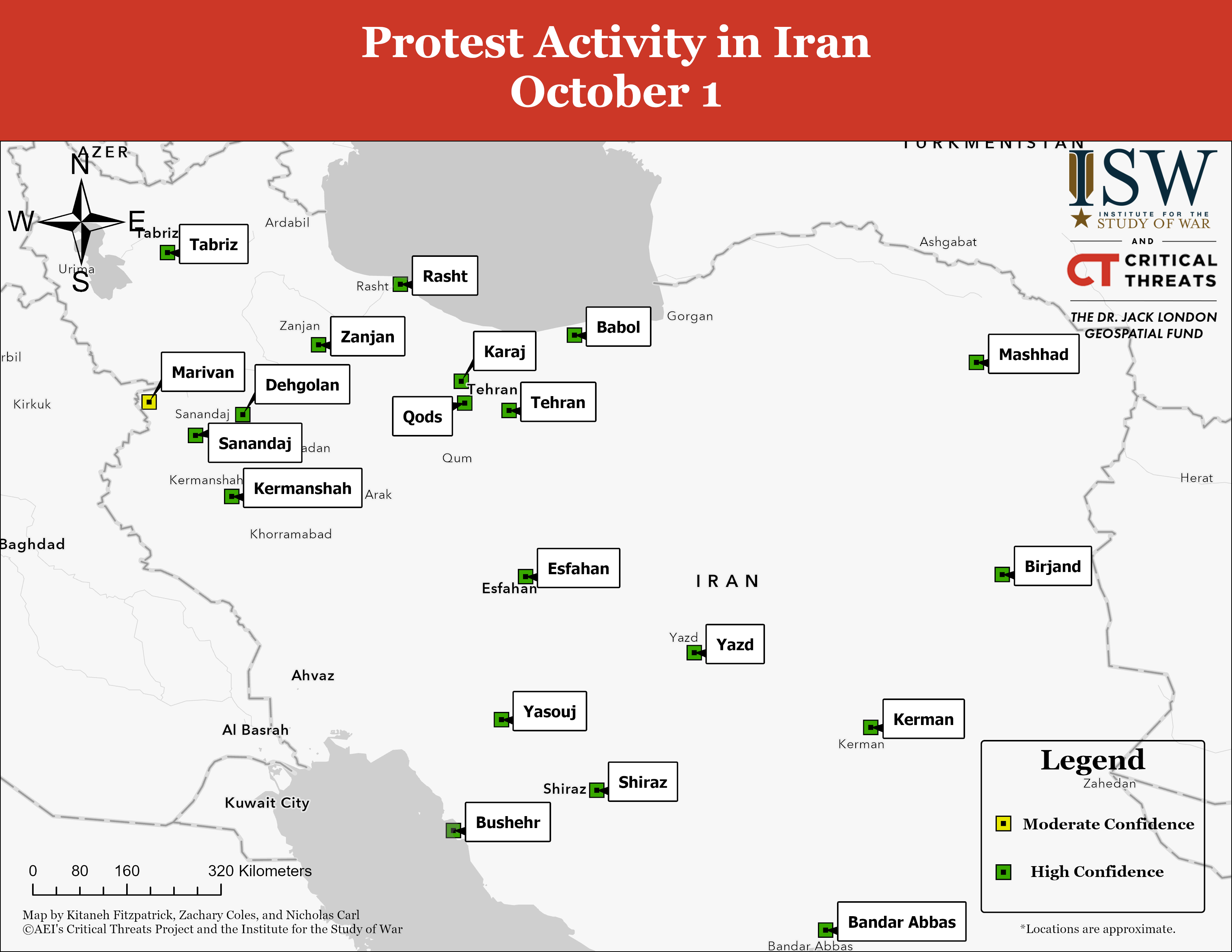 CTP can assess with moderate confidence that merchants participated in strikes supporting anti-regime protests in at least 11 Iranian towns and cities, particularly throughout northwestern Iranian provinces:

Uncorroborated social media reports suggest that university students—specifically in Tehran, Esfahan, and Mashhad cities—mostly organized and attended protests on October 1.[vii] IRGC-affiliated Javan News reported that 93 percent of individuals participating in ongoing unrest are younger than 25.[viii] Footage circulating on social media shows protestors chanting a slogan unique to the Mahsa Amini movement: “Woman, Life, Freedom,” which appears to originate from a viral song detailing popular grievances against the regime.[ix] Iranians have reportedly played this song as a sign of dissent in recent days, underscoring the role of social media in mobilizing ongoing unrest.[x] Iranian authorities reportedly arrested the songwriter on September 29.[xi]

One of the 2009 Green Movement leaders, Mir Hossein Mousavi, released a statement calling for the Iranian armed forces to end their crackdown and support the protesters.[xii] The regime has kept Mousavi under house arrest since 2009.[xiii] The Kalemeh TV Telegram channel published Mousavi’s statement.

Planned demonstrations in Iraq adopted an anti-Iran tone and expressed solidarity with Iranian protests on October 1.[xiv] Iraqi demonstrators gathered in Baghdad to commemorate the third anniversary of the October 2019 protests, which protested against government corruption and inefficiency as well as against Iranian influence in Iraq. Social media accounts reported that comparable demonstrations occurred in Basra and Nasiriyah, although CTP cannot verify these claims.[xv] Supporters of prominent Shia cleric Moqtada al Sadr participated in the Baghdad demonstrations. They voiced anti-Iran sentiment. Sadr has competed with Iranian-backed political parties for influence throughout the Iraqi government formation process, which has been in political deadlock since October 2021.

Lebanese Hezbollah Secretary General Hassan Nasrallah criticized Iraqi protesters for chanting against the Iranian regime on October 1.[xvi] Nasrallah stated that Iran is the center of the so-called “Axis of Resistance” and accused the West of stoking protests in Iran. Nasrallah made these remarks in a speech that primarily focused on domestic Lebanese issues. Nasrallah likely seeks to prevent anti-Iran protests from spreading further throughout Iraq and to Lebanon. Similar protests against the Iranian regime spread from Iraq to Lebanon and Iran in October and November 2019, respectively.