The continued public absence of Supreme Leader Ali Khamenei may be hindering regime officials’ efforts to develop a coherent response to the ongoing, anti-regime protests. Khamenei has not addressed the protests nor made a public appearance since September 21, possibly due to his reportedly worsening health.[1] An unidentified Iranian official told Reuters that intra-regime disagreements over supreme leader succession and protest management are dividing the regime elite.[2] This division suggests that Khamenei is not playing his usual role of cohering the regime during a crisis.

Khamenei’s silence may have opened a leadership vacuum that other regime authorities are having to fill. Islamic Revolutionary Guards Corps (IRGC) leaders struck a more conciliatory tone on October 2 as university students have adopted an increasingly prominent role in the protest movement. IRGC Commander Major General Hossein Salami said, “we consider [the protesting youth] our friends, and we will not allow the enemy to attack you.”[3] Salami was referring to his allegation that Iran’s international adversaries are coopting and stoking the protests to destabilize the regime. Armed Forces General Staff (AFGS) Chief Major General Mohammad Bagheri met with students and celebrated their role in advancing the regime and revolution.[4] Khamenei would ordinarily play a prominent role in such messaging during a crisis, and his silence is abnormal.

President Ebrahim Raisi has played a minor role thus far in communicating to the protesters or the Iranian population.  His low profile is remarkable given his legal responsibilities for maintaining public order in Iran.  He may seek to avoid becoming the face of the crackdown to preserve his chances to be accepted as the next supreme leader, but it is hard to see his relative silence as anything other than weakness.

Anti-regime outlet IranWire has published reports claiming that security leaders have disagreed over how to respond to the protests, further indicating that they may lack guidance from the supreme leader. IranWire reported on September 24 that IRGC leaders accused other security bodies suppressing protests of negligence, citing an unidentified former Iranian official.[5] IranWire also reported on September 29 that senior IRGC officers have disagreed with the brutal treatment of protesters and instead advocated for fighting anti-regime Kurdish groups in northwestern Iran.[6] CTP cannot verify these reports.

Khamenei’s absence may be emboldening segments of the clerical establishment, especially in Qom, to criticize and pressure the regime more openly. Two senior clerics—Ayatollah Mustafa Mohaghegh Damad and Ayatollah Asadollah Bayat Zanjani—issued statements on September 17, criticizing state security services for the death of Mahsa Amini.[7] Ayatollah Hossein Nouri Hamedani called on the regime to listen to the people’s grievances on September 25.[8] Persian-language media outlet Zeitoon published a statement allegedly from students and teachers at the Tehran, Mashhad, and Qom seminaries on September 30, condemning Khamenei and the regime crackdown on the protests.[9]

Supreme Leader Ali Khamenei remains absent and did not make a public appearance or statement on October 2. Persian-language social media account tweeted on October 1 that Khamenei will visit Law Enforcement (LEC) facilities in the coming days. The LEC is Iran’s premier internal security service and police force. The regime has used the LEC extensively throughout Iran to crack down on the ongoing, anti-regime protests.

Anti-regime protests decreased in number across Iran but were significantly more violent—specifically in Tehran—on October 2. CTP assesses with moderate-to-high confidence that demonstrations occurred in at least 13 Iranian cities in 10 different provinces. Iranian social media users documented unrest in the following locations, the majority of which occurred on or in the vicinity of university campuses. 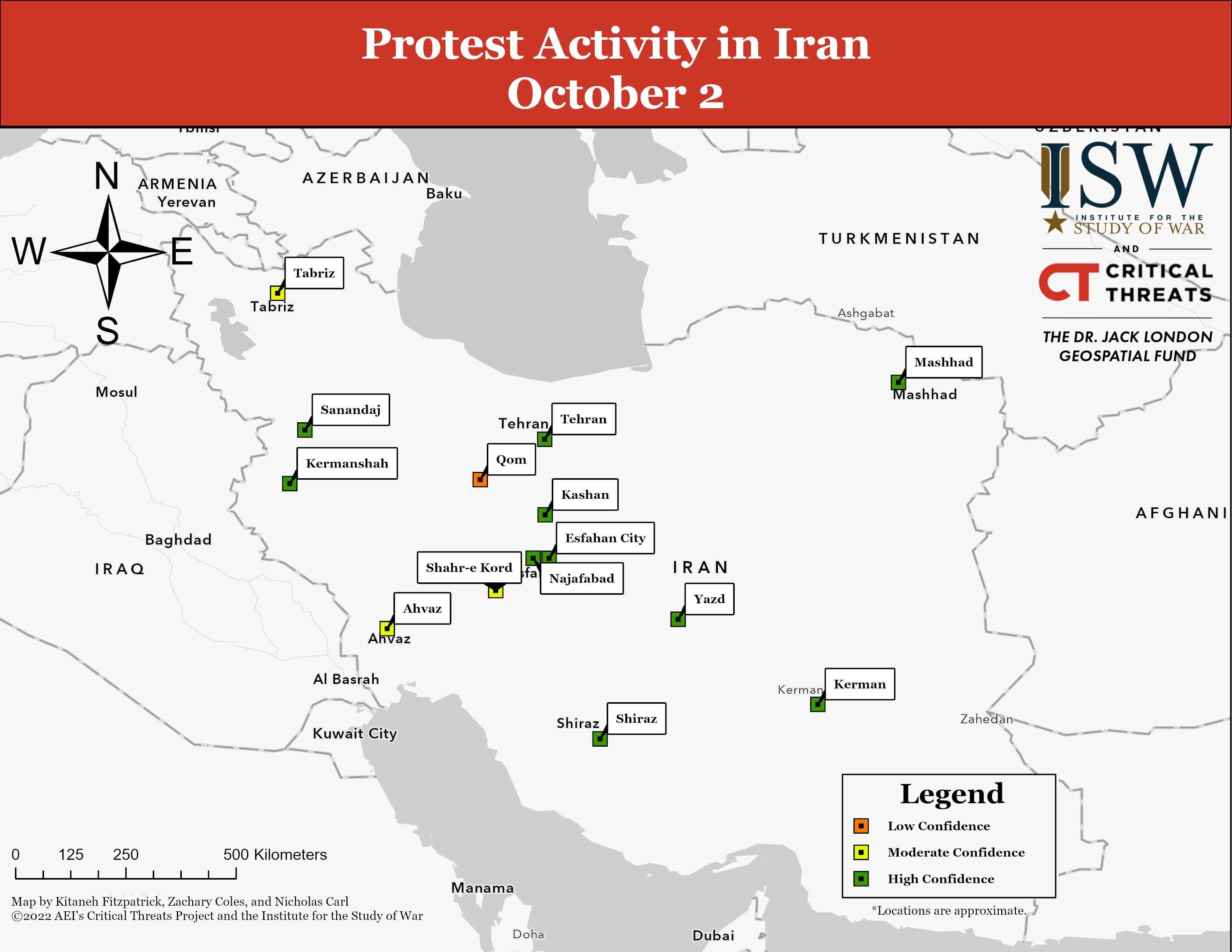 The regime could escalate significantly against the protesters in Najaf Abad if they expand further. The IRGC Ground Forces 8th Najaf-e Ashraf Armored Division is headquartered around the town’s periphery.[21] The IRGC is likely sensitive to instability particularly in Najaf Abad given the location of this armored division‘s headquarters. Najaf Abad is a relatively small town with a population of around 300,000 according to 2016 estimates.[22] 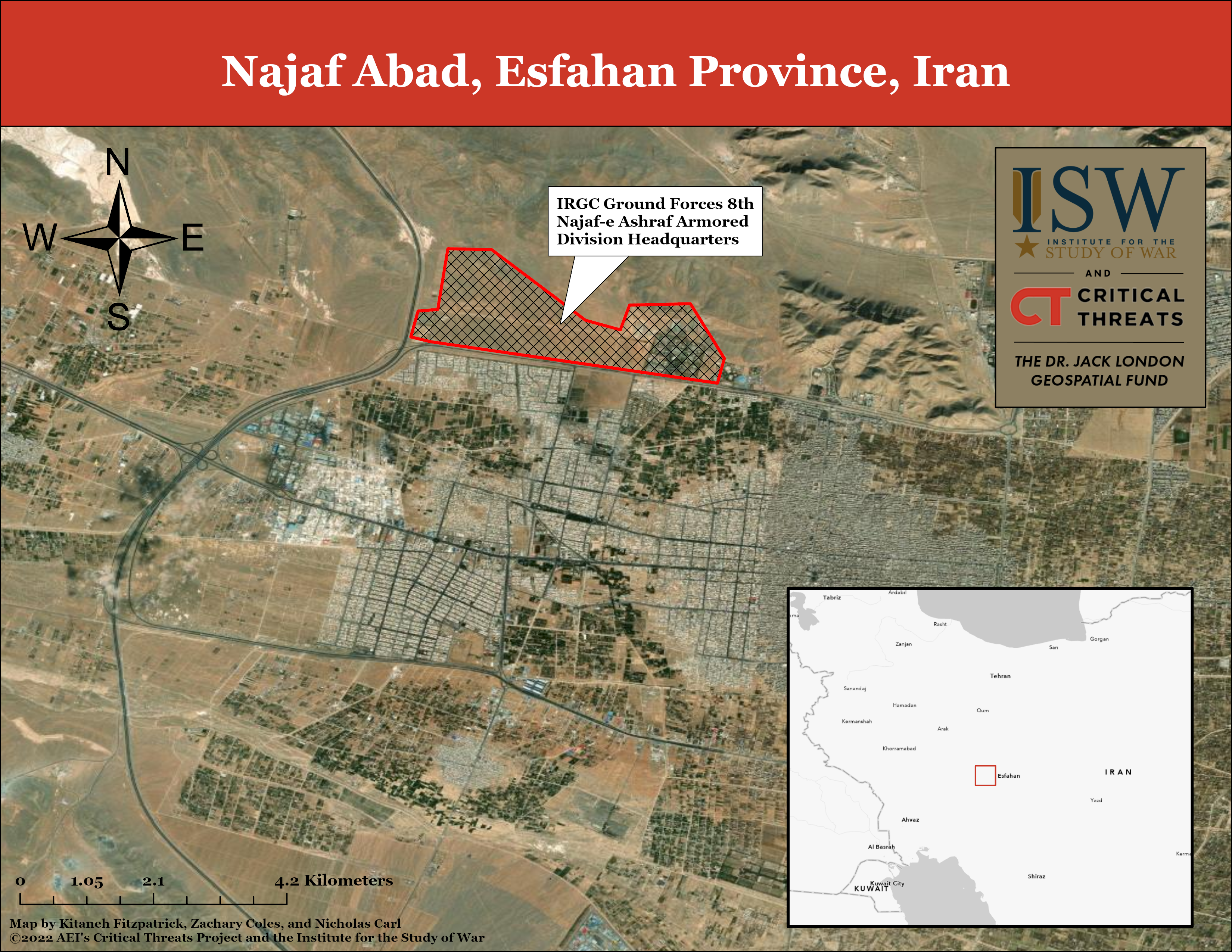 IRGC Base in Najaf Abad.png