Supreme Leader Ali Khamenei made his first public appearance since September 21.[1] He spoke to a military officer graduation ceremony alongside the regime’s most senior military leaders. Khamenei appeared in stable condition during his speech.

Khamenei condemned the ongoing, anti-regime protests during his speech—his first public acknowledgment of the protests. Khamenei accused the US and Israel of stoking the protests and said that the greatest victims were the state security services “and the Iranian nation.” Khamenei honored the security personnel killed in the protests.

Khamenei may have decided to meet the military leadership for his first address on the protests to signal his support for the security establishment and for a hard line on the demonstrations. Khamenei has not typically made public spectacles of meetings with senior military officers in previous major protest waves, although he has held such meetings during non-crisis periods. The following individuals joined Khamenei:

Khamenei stated that some of the regime’s strongest female supporters do not wear the full hijab in public, indicating that the regime may relax its hijab enforcement to placate protesters. Khamenei’s remark does not likely signify a reversal of the mandatory hijab law but rather a message to the security establishment to enforce it less aggressively. Khamenei also expressed regret over the death of Mahsa Amini.

Supreme Leader Ali Khamenei made his first public appearance since September 21.[2] Khamenei spoke to a military officer graduation ceremony alongside senior military and security forces leaders. Khamenei appeared to be in no worse health than on his last such public engagement, suggesting that he may have recovered if Western reporting that his health had deteriorated was accurate.

Anti-regime protests increased in number on October 3. CTP assesses with moderate-to-high confidence that demonstrations occurred in at least 18 Iranian cities in 16 different provinces. Iranian social media users documented unrest in the following locations, all of which occurred on or in the vicinity of university campuses: 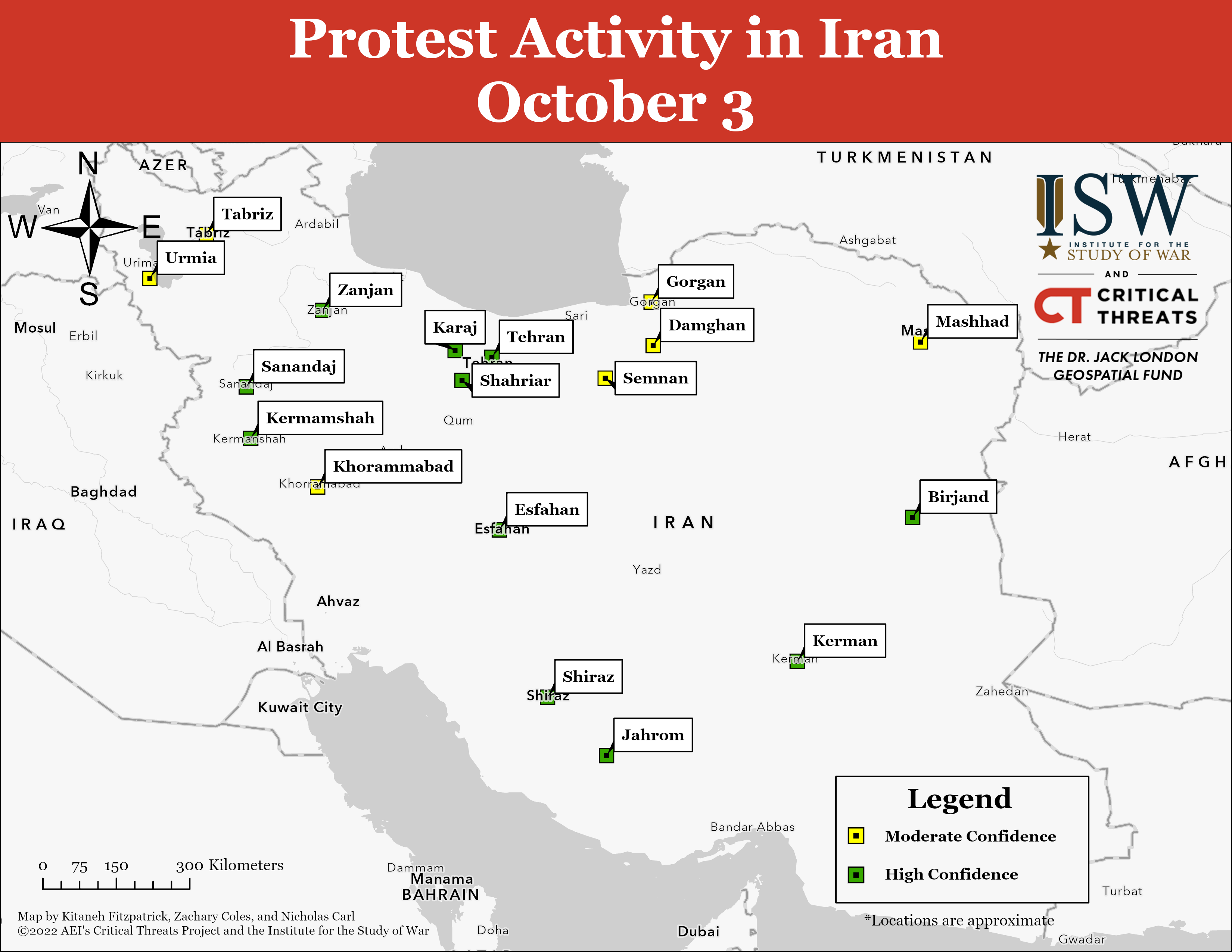 Iranian university students and faculty staged widespread demonstrations following the regime’s brutal crackdown on Sharif University protestors on October 2. Science, Research, and Technology Minister Mohammad Ali Zolfi Gol met with Sharif University President Rasoul Jalili the following day.[3] Sharif University’s Students Basij Organization—which is an extension of the Iranian security services—released a statement condemning the regime’s response to October 2 protests, signaling the gravity of clashes between protestors and security forces.[4] Sharif University announced that its classes will be held virtually until further notice.[5] The Iranian Teacher’s Trade Association released a statement urging all teachers and students to boycott classes and join nationwide strikes and protests on October 3.[6] Footage circulating on social media suggests that university students are continuing to organize and attend protests, despite reports of heavy security presence in major Iranian university campuses.[7] Protests were documented in several universities in Tehran including Shahid Beheshti University, which the EU sanctioned in 2011 for its ties to the Iranian nuclear program.[8] Anti-regime demonstrations at Sharif and Shahid Beheshti Universities may particularly concern the regime given the importance of these institutions to Iranian nuclear proliferation and military efforts. 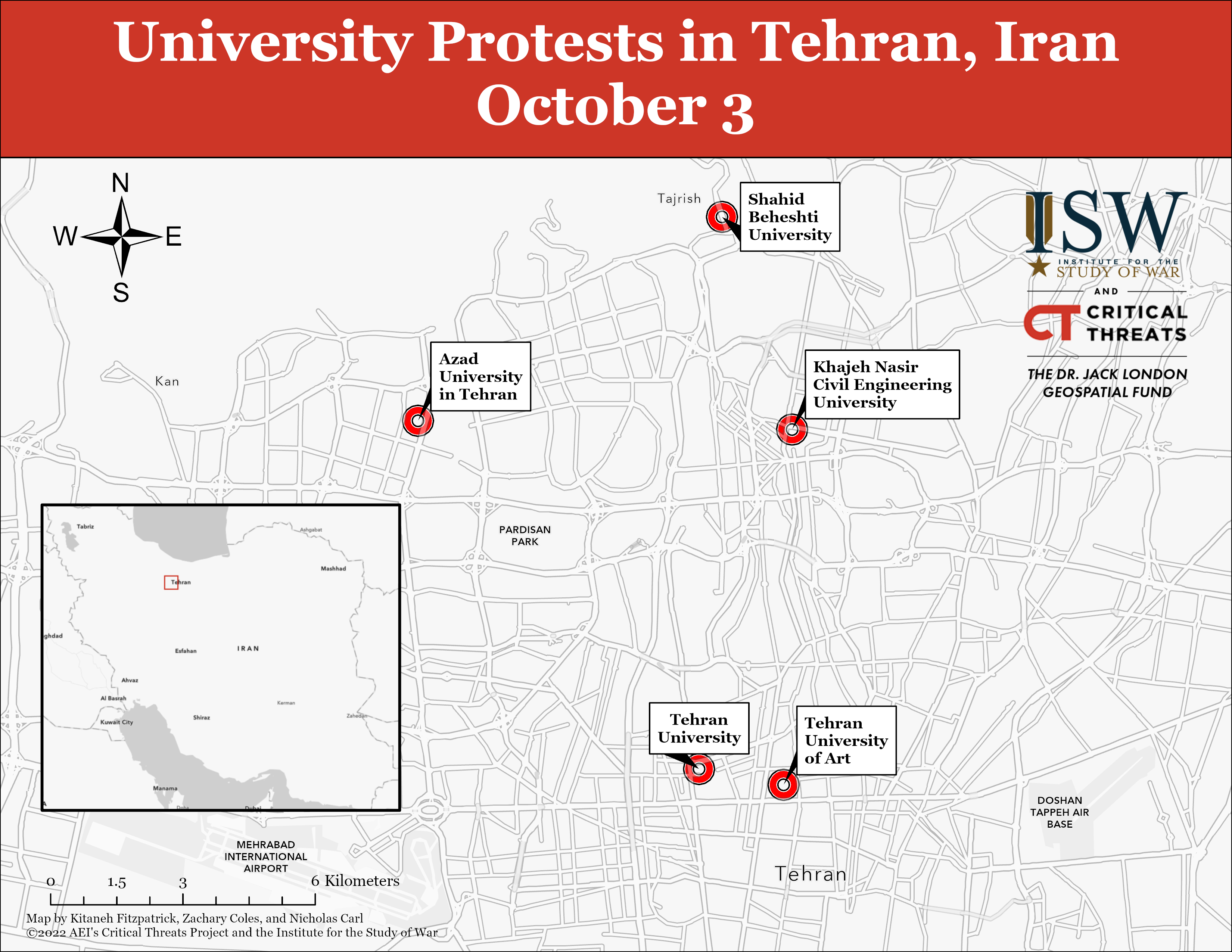 The IRGC likely attacked anti-regime Kurdish militia positions in Iraqi Kurdistan for the eighth consecutive day. An Iraqi media source stated that the IRGC attacked positions in Sidekan, Soran District, Erbil Province.[12] The source said the attack did not cause casualties or damage any property. CTP cannot independently validate this report.