Iran may be preparing to escalate militarily against its foreign adversaries, including the US, in response to the ongoing, anti-regime protests. Likely Iranian-backed militants conducted a rocket attack against a US military base in northeastern Syria on October 8. Supreme Leader Ali Khamenei and other senior political and security officials have accused the US, Israel, and Saudi Arabia of coopting and stoking the protests in recent days.[1] Senior Iranian military officers released a statement vowing to retaliate on October 6.[2] Iranian forces or proxies may conduct additional attacks against US positions in the Middle East, especially in Iraq and Syria, in response to what they claim is Washington’s role in the protests.

Iranian proxies may also escalate against Turkey to redirect Iraqi resentment over Iranian attacks into Iraqi Kurdistan toward Ankara rather than Tehran. Likely Iranian-backed Iraqi militants conducted a rocket attack on a Turkish military base in Mosul Province on October 8.[3] Liwa Ahrar al Iraq—a front group that Iranian-backed Iraqi militants use to claim attacks against Turkish forces —claimed responsibility. Iranian-backed Iraqi militants frequently used Liwa Ahrar al Iraq to claim attacks against Turkish positions during a period of escalatory attacks in June and July 2022.[4] The Iraqi public and political establishment rallied against Turkey and its attacks into Iraqi Kurdistan during this period. Liwa Ahrar al Iraq resurfacing to claim attacks on Turkish forces may indicate that Iran and its proxies are preparing to escalate against Turkish forces and seek to again divert Iraqi citizens’ and officials’ anger toward Ankara rather than Tehran.

Iran may be preparing to conduct a ground incursion into Iraqi Kurdistan to attack anti-regime Kurdish militant groups operating there. The IRGC Ground Forces conducted daily artillery, drone, and missile attacks against Kurdish militants in Iraqi Kurdistan from September 26 to October 7.[5] An IRGC-affiliated social media account tweeted on October 8 threatening that IRGC armored and special forces units would intervene against these militant groups if Iraqi Kurdish political authorities do not remove these groups from the border region.[6] IRGC-affiliated Tasnim News Agency echoed this threat on October 9.[7] Social media rumors on October 9 alleged that the IRGC has begun concentrating forces in Baneh, Kurdistan Province near the Iran-Iraq border.[8] CTP is unable to corroborate those rumors at this time.

CTP assesses with high and medium confidence that protests occurred in the following locations: 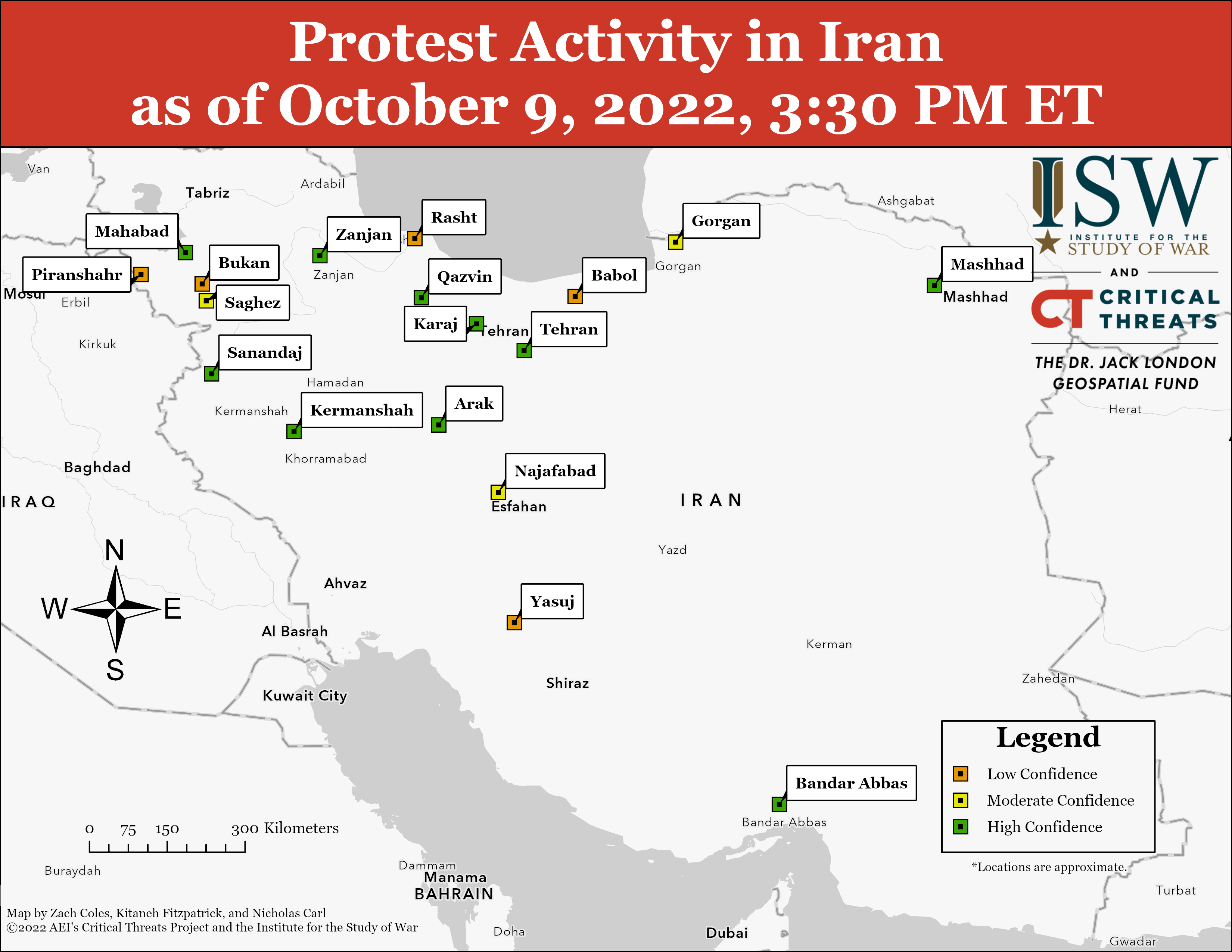 Anti-regime group The Neighborhood Youth of Tehran announced its expansion to other unnamed cities in Iran.[9] The group has participated in organizing protests in recent weeks.

Some low-level Iranian military and security personnel may have defected to the protesters. A Persian-language social media account tweeted on October 8 that the regime has arrested some officers from the Artesh Ground Forces 21st Hamzeh Infantry Division, which is headquartered near Tabriz.[10] Videos on social media depict LEC officers marching with protesters around Tehran on October 9.[11] CTP cannot verify the authenticity of these videos nor whether the officers were joining the protests or simply escorting them. Parliamentarian and former IRGC officer Brigadier General Mohammad Esmail Kowsari stated that the regime should hold accountable security personnel who do not fulfill their duties, suggesting that there are such personnel.[12]

Radio Farda reported that forces from the LEC Special Units transferred from Zahedan to Kerman.[17] The LEC Special Units is a highly trained, anti-riot force that deploys when regular police cannot contain protests.[18] This LEC branch is known as one of the most ideologically fervent in the Iranian armed forces. A regime decision to deploy the LEC Special Units away from Zahedan would be surprising given the recent deadly unrest there and explicit threats from anti-regime militant groups to escalate further. The IRGC Ground Forces could deploy its 110th Salman Farsi Independent Special Forces Brigade, which is headquartered in Zahedan, to suppress protests in place of the LEC Special Units if it felt the situation merited such force.[19]

A popular English-language social media account tweeted that the Office of the Supreme Leader dismissed some of its security personnel and replaced them with a new cadre of officials.[20] CTP cannot verify this rumor.