Kremlin messaging on Afghanistan since August 15 has balanced praise for the Taliban’s supposedly “peaceful” takeover of Kabul with cautious rhetoric about officially recognizing the Taliban, which is still formally designated as a terrorist organization in Russia. Zamir Kabulov, the Kremlin’s special representative for Afghanistan, stated on August 16 that the Kremlin “prepared the ground ahead of time” to work with “the new government of Afghanistan.”[1] Kabulov said that Russia has retained its embassy in Kabul with security cooperation from the Taliban and praised the Taliban for taking over security in the capital “absolutely peacefully.”[2]

The Kremlin is officially predicating recognition of the Taliban on the Taliban’s ability to prevent jihadist attacks in Central Asia and, to a lesser extent, meet unstated good-governance requirements. The Kremlin previously called on the Taliban to “prevent the spread of tensions” beyond Afghanistan’s borders during meetings in Moscow in early July.[3] Kabulov said Russia does not see “a single direct threat to our allies in Central Asia” from the Taliban itself but noted on August 16 that regime change can create “a niche for other international terrorist organizations.”[4] The Kremlin has additionally paid lip service to requiring the Taliban to meet undefined standards of governance but will likely focus on security concerns. Russian Foreign Minister Sergey Lavrov said Russia is in no hurry to recognize the Taliban but also claimed that the Taliban has expressed the desire to have a government “with other political forces” and continue the functions of the Afghan state.[5] Kabulov said that Russia will likely remove the Taliban from its list of terrorist organizations if the Taliban “continues to behave peacefully.”[6] Russian rhetoric suggests that Moscow is seeking unspecified concessions from the Taliban before recognizing it. Those concessions will likely go beyond assurances about containing terrorism and good governance.

Russian and partner forces are increasing the frequency of joint military exercises in Central Asia and are preparing for a Collective Security Treaty Organization (CSTO) exercise in the coming months. Russian and partner forces conducted several major exercises in August prior to the fall of Kabul. Over 2,500 Russian, Tajik, and Uzbek troops conducted joint exercises to practice preventing militants from crossing the border at a training ground in the Khatlon region of Tajikistan, approximately 20 kilometers from the Afghan border, from August 5-10.[7] Roughly 1,500 Russian and Uzbek troops conducted concurrent joint exercises in Uzbekistan from August 2-7.[8] Russian and partner forces announced several additional exercises following the fall of Kabul on August 15. Approximately 1,000 troops at Russia’s 201st Military Base in Tajikistan began snap exercises on August 17 that are ongoing as of August 19.[9] The Kazakh military raised its state of readiness and began readiness checks on August 16 and notified reservists of possible deployment, following Tajikistan’s previous mobilization on July 22.[10] The Collective Security Treaty Organization (CSTO) announced on August 16 that it will hold an exercise designated “Cobalt-2021” in Tajikistan “in the coming months” but did not specify a date or the participants.[11] The Kremlin-dominated CSTO has previously declined Tajik requests for military deployments to the border with Afghanistan. The Kremlin maintains that Russian and partner forces are sufficient to secure the border with Afghanistan but retains the option to deploy the CSTO’s rapid reaction force if needed.[12] The Kremlin likely seeks to secure bilateral ties and direct Russian basing in Central Asian states, rather than immediately leverage the multinational CSTO force.

The Kremlin will likely officially recognize the Taliban and will expand Russian basing and military operations in Central Asia to combat potential jihadist threats. Russia’s demands incentivize the Taliban to prevent third-party jihadist groups from attacking neighboring states. However, the Taliban is unlikely to completely control Afghanistan’s borders, and jihadist groups and criminal networks are highly likely to proliferate in Tajikistan, Uzbekistan, and other Central Asian states. The Kremlin will likely accept a level of insecurity in the region above what the United States and its allies would normally tolerate and recognize the Taliban as the legitimate government of Afghanistan. The Kremlin may additionally seek to secure economic concessions such as access to mineral resources from the Taliban in exchange for recognition. The Kremlin will also prioritize preventing potentially destabilizing refugee flows from Afghanistan. The Russian military has prepared for several years for the potential of a renewed jihadist threat to Central Asia following a US withdrawal from Afghanistan.[13] Russian military deployments in Central Asia are in large part responses to this legitimate threat. However, additional Russian basing and further military cooperation with Central Asian states will support the Kremlin’s campaign to integrate the militaries of the former Soviet Union under Russian structures and improve Russian force-projection capabilities. 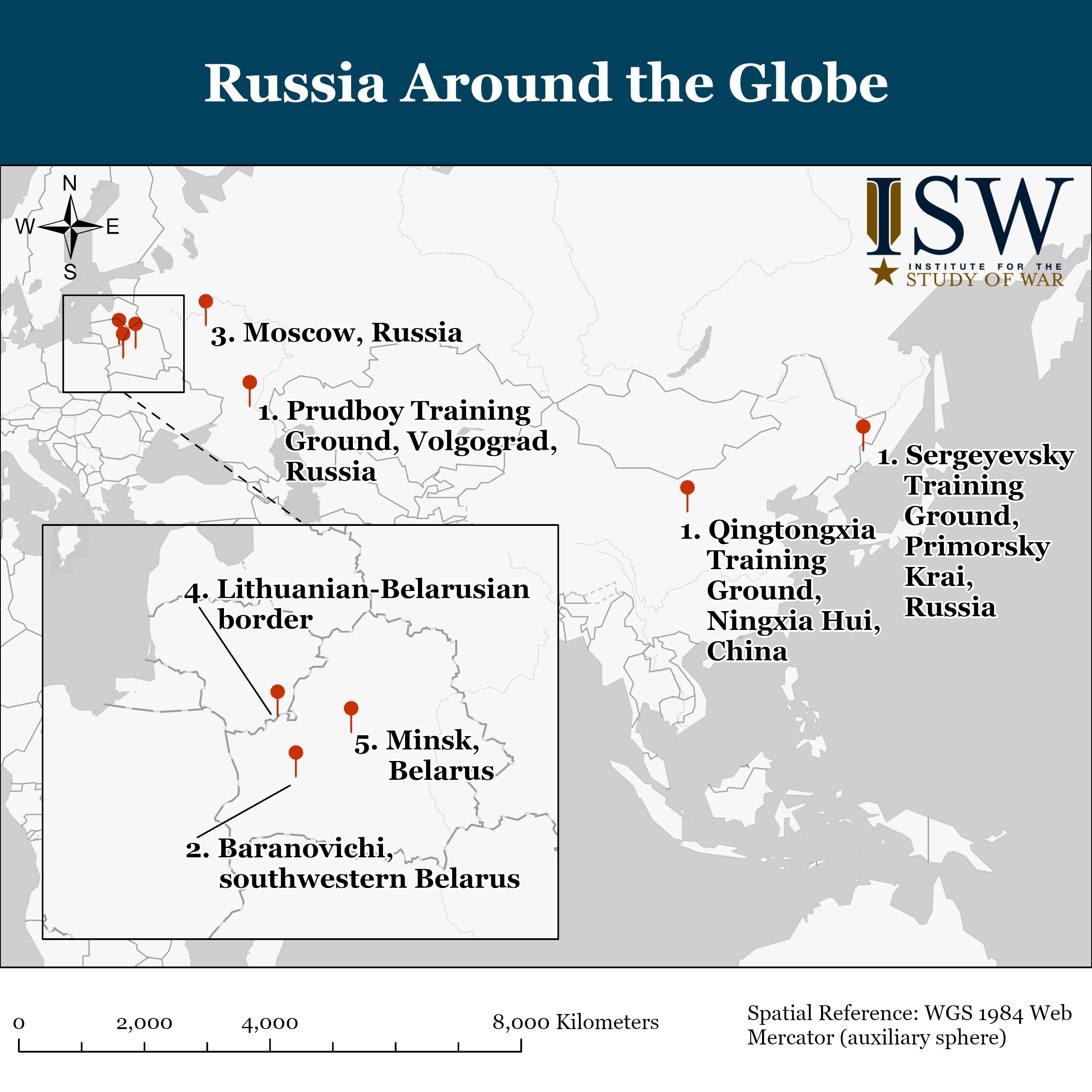 [6] Ignat Bakin, [“The Ministry of Foreign Affairs Discussed the Procedure for Excluding the Taliban from the list of Terrorist Groups,”] Znak, August 17, 2021, https://www.znak dot com/2021-08-17/v_mid_rf_rasskazali_o_procedure_isklyucheniya_talibana_iz_spiska_terroristov.

[19] The Belarusian military did not report the name of the unit and the Russian military has not acknowledged the brigade’s deployment. However, the Belarusian Ministry of Defense reported the arrival of a unit commanded by “Alexander Gorlov” with accompanying photos on August 4. Alexander Gorlov commanded the 60th Communications Brigade as of July 29, 2021 and participated in preparations for Zapad throughout 2021, so it is highly likely his unit has deployed to Belarus. [“Welcome!”] Belarusian Military Information Agency, August 3, 2021, https://www.vayar dot mil.by/news/137210/;  [“ZVO Signalmen Worked out a Training Alert in Preparation for the SSU ‘Zapad-2021’,”] Izvestia, June 29, 2021, https://iz dot ru/1185587/2021-06-29/sviazisty-zvo-otrabotali-uchebnuiu-trevogu-v-ramkakh-podgotovki-k-ssu-zapad-2021.

[28]  [“Latvia has Declared an Emergency Regime on the Border with Belarus due to the Situation with Migrants,”] Mediazona, August 10, 2021, https://mediazona dot by/news/2021/08/10/latvia2; Eugene Lutsenko, [“The First Illegal Migrant from Iraq has Left Lithuania under the New Program. He was Bought Tickets and Given 300 Euros,”] Hromadske, August 13, 2021, https://hromadske dot ua/posts/z-litvi-za-novoyu-programoyu-viletiv-pershij-nelegalnij-migrant-z-iraku-jomu-kupili-kvitki-ta-dali-300-yevro.

[33] [“Meeting with Senior Officials of Council of Ministers,”] President of the Republic of Belarus, August 17, 2021, https://president.gov dot by/en/events/soveshchanie-s-rukovodstvom-soveta-ministrov-1629192881.