US intelligence reported over the weekend of April 9-10 that Russian Army General Aleksandr Vladimirovich Dvornikov, commander of the Southern Military District, is now in overall command of Russian operations in Ukraine. This news is unsurprising; Dvornikov is the most senior of the three Russian military district commanders involved in the invasion, and the Russian military is concentrating its efforts almost exclusively in the area of Ukraine that Dvornikov had already been commanding. Had Putin selected another officer to command the entire war effort, he would likely have had to relieve Dvornikov for these reasons. There is no reason to suppose, therefore, that Dvornikov was specifically selected to take control of the war effort for any particular skills or experience he might have. Nor is there reason to think that the conduct of the Russian war effort will change materially more than it was already changing from the abandonment of the drive on Kyiv and the focus on the east. This update, which we are publishing in addition to our regular military operations assessments, explains Dvornikov’s career history and experience in Syria, the challenges he faces, and what his appointment means for the Russian campaign in Ukraine.

Dvornikov’s career path is not unusual among senior Russian general officers.[7] Dvornikov’s foundational military experience—like many of his fellow general officers—was his assignment as a regimental chief of staff and then regimental commander in the North Caucasian Military District from 2000 to 2003, during which period he almost certainly participated in the Second Chechen War. Dvornikov’s promotion path from regimental command to Military District Commander was typical. Russian officers usually change military districts with each promotion, as Dvornikov did—moving through the contemporary equivalents of the Southern, Eastern, and Central military districts until taking command of the Southern Military District.[8] Dvornikov’s career path through 2015 was thus unremarkable for a very successful general officer.

Dvornikov’s experience commanding the Russian deployment to Syria—and targeting of civilians during that deployment—was also not in itself unique or an indicator of a particular skill set. Many Western media outlets have focused on Dvornikov’s experience in Syria and highlighted Russian targeting of civilians under his command. All of Russia’s current military district commanders, as well as the commanders of Russia’s Aerospace Forces, Airborne forces, and Military-Political Directorate, have served at least one tour of duty in Syria as chief of staff or commander of Russia’s forces in Syria.[9] It appears to have been Russian military policy to rotate senior officers through service in Syria and then select for further promotion only those who had served in Syria.[10] Dvornikov, in fact, has less experience in Syria than many of his contemporaries, serving one 10-month tour as commander. By comparison, Western Military District Commander Colonel General Alexander Zhuravlev and Eastern Military District Commander Colonel General Alexander Chayko served in Syria for two tours each, totaling 24 and 20 months respectively.[11] Dvornikov’s command of Russian operations in Syria that killed large numbers of civilians is similarly, and tragically, not unusual. Dvornikov has gained attention in Western media as the “Butcher of Aleppo,” but Russian forces targeted Syrian civilians and critical infrastructure throughout the Russian intervention in Syria, making all Russia’s current military district commanders and many of its senior military leaders complicit in such crimes.[12]

Dvornikov’s one unusual skill may result from his particular experience establishing new command structures in complicated coalition settings because he was the first Russian commander in Syria. Dvornikov established Russia’s initial command structure in Syria from the beginning of the Russian intervention in September 2015. Dvornikov has written extensively on the experience of standing up Russian operations in Syria, including a March 2016 retrospective published while he was still serving in Syria and several articles following his return to Russia.[13] He stressed the importance of establishing a unified command and control structure for Russian advisers, the Russian Air Force, and various conventional and unconventional pro-Assad forces. Dvornikov particularly claimed (likely exaggerating) in “Staffs for New Wars” (July 2018) that he rebuilt the shattered and demoralized pro-Syrian forces into a cohesive fighting force. Dvornikov’s writing additionally stresses the importance of creating a unified command structure for all Russian forces cutting across unit and service boundaries. Dvornikov’s Syrian experience may help him integrate the battered elements of the Western, Eastern, and Central military districts coming his way as reinforcements, as well as the Chechen forces of Ramazan Kadyrov and the proxy militias of the Donetsk and Luhansk People’s Republics.

His experience overseeing the pro-Assad offensive that recaptured Aleppo also likely gave him more insight into the conduct of modern urban warfare than his successors in Syria, although urban warfare in Syria was not confined to Aleppo. Dvornikov commanded the final pro-Assad offensive that recaptured Aleppo—Syria’s largest city, with a pre-war population of over 2 million—in 2016. Aleppo was one of the bloodiest campaigns of the Syrian Civil War and likely the main source of recent Russian lessons learned on modern urban combat.[14] But Dvornikov was not specially selected for command because of any experience in urban warfare. To begin with, he took command of the Southern Military District in 2016, likely years before Putin planned to invade and occupy Ukraine. If Putin or Gerasimov were specifically choosing an officer with experience in urban warfare experience to command something, moreover, it would have made much more sense to assign Dvornikov to the battle for Kyiv.  Dvornikov has commanded Russian operations in Mariupol in the current Russian invasion of Ukraine all along. He may have been applying—or attempting to apply—many of the lessons learned in Syria, but his conduct of urban warfare in Mariupol has been unremarkable in terms of its success, speed, and cost in casualties. There is no reason to think that Dvornikov had been selected to command in Syria because of any skill or theoretical work on urban warfare, for that matter. He commanded the Aleppo campaign because it was Russia’s major campaign during his tenure in Syria, not as a specific appointment. The tactics and approaches used by Russian forces in both Syria and Ukraine are not unique to Dvornikov or any other individual Russian commander. Neither are they particularly effective.

Dvornikov is the natural choice of military district commander to command current Russian operations in Ukraine due to his command of the primary Russian area of operations and his seniority. Dvornikov’s command of the SMD from 2016 to 2022 grants him the greatest familiarity with operations in eastern Ukraine, as he oversaw the largely frozen conflict in Donbas in that period and is the direct commander of the primary Russian forces in the region—the 8th Combined Arms Army and forces of Russia’s proxy Donetsk and Luhansk People’s Republics. Dvornikov has commanded the Donbas and southern axes since the beginning of the current Russian invasion on February 24, and his forces have achieved the greatest successes of the initial period of the war. Had Putin chosen another officer to command the overall war effort now that he has condensed it to a focus on Dvornikov’s area of responsibility he would almost certainly have had to relieve Dvornikov of his command. Considering that Dvornikov’s performance in command was no worse, and in some ways better, than the performances of his lower-ranked colleagues, such a decision would have been odd indeed.

The Kremlin’s belated appointment of a single overall commander in Ukraine will not automatically solve Russian command, logistics, and morale issues, and Dvornikov faces several ongoing operations that may exceed his span of control.

Russian forces are currently carrying out the following missions in Ukraine:

The Russian military’s previous approach to command in the war in Ukraine was apparently for three military district commanders (South, West, and East) to independently command their own axes of advance, leading to disjointed offensive operations. Collapsing the war effort into the east and south itself eliminates some of that problem, whoever took command. Dvornikov’s appointment as sole commander may well challenge his ability to conduct simultaneous operations focused on even this reduced list of Russian offensive operations, especially given the severe losses of senior commanders the Russian military has experienced. We have already seen indicators that Russian forces are unable to conduct simultaneous major offensive operations between Kherson, Donbas, and Izyum, and this challenge will likely continue.

Dvornikov will likely struggle to integrate units redeployed from western to eastern Ukraine into his ongoing operations, which have to date been conducted by Southern Military District troops under his direct command. ISW has assessed throughout the war that the SMD had been the most effective Russian district due to its unity of command, high readiness, and rate of large-echelon military exercises prior to the war—in contrast to units from Russia’s other districts, which were cobbled together prior to the invasion with little time to cohere unified structures and practice the high-end conventional warfare necessary for the current Russian campaign.[15] Damaged Russian units withdrawn from Kyiv and northeastern Ukraine continue to deploy to the Izyum axis and may eventually redeploy to Donbas. These units are unlikely to perform better just because Dvornikov is leading them as overall commander.  Dvornikov will in fact likely face significant challenges integrating these units into ongoing operations. 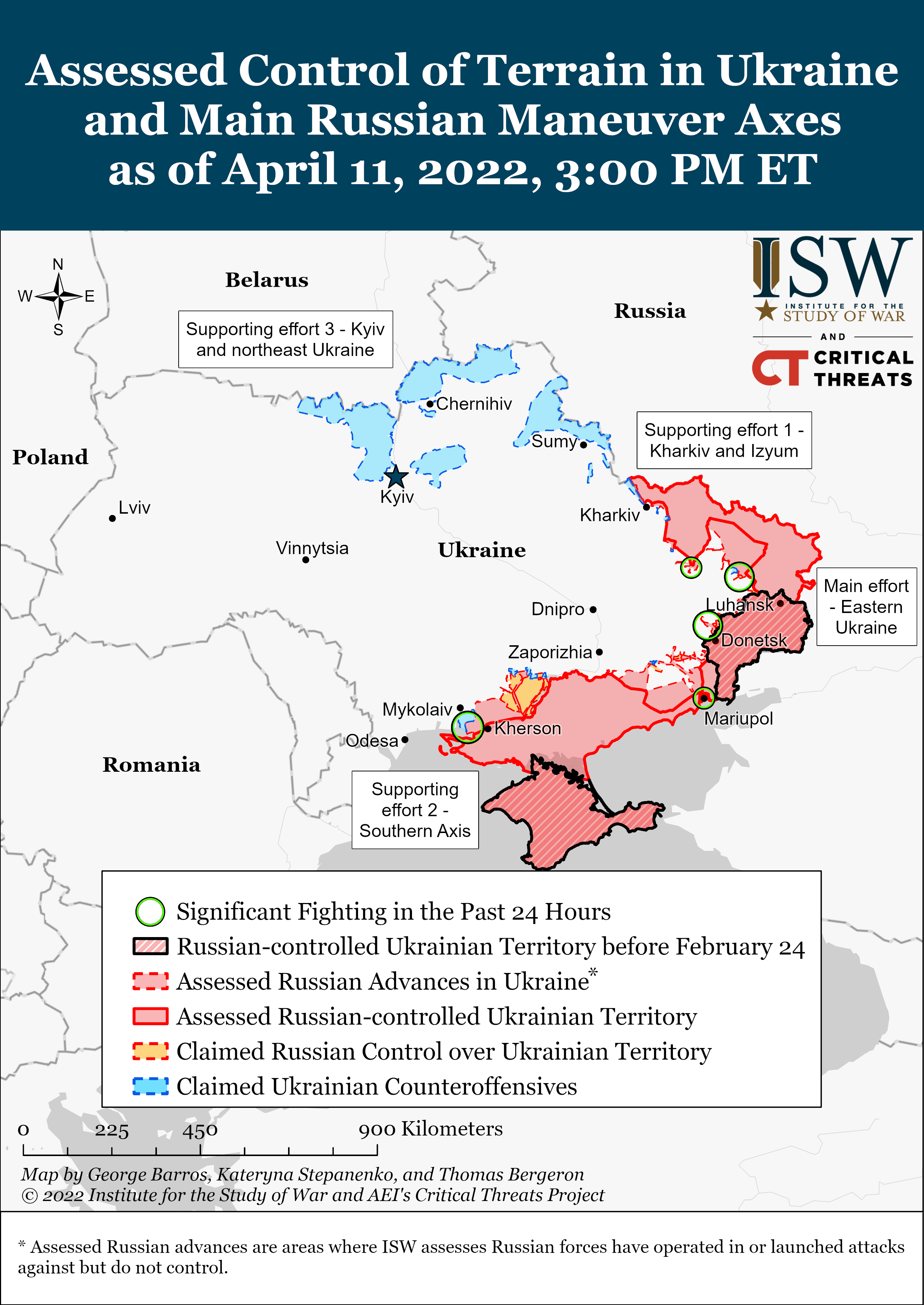 Russian forces continued assaults in the past 24 hours and claimed further advances, but ISW cannot independently verify any territorial changes.[18] Russian media outlet RT shared unmanned aerial vehicle (UAV) footage on April 11 confirming that Russian forces have bisected Ukrainian defenders between the Azovstal Plant in eastern Mariupol and a second group of Ukrainian forces in the Port of Mariupol in the southwest, which ISW previously reported on April 10.[19] DNR head Denis Pushilin claimed that Russian forces have cleared 80% of Mariupol (which ISW cannot independently confirm) and falsely claimed they fully control the Port of Mariupol as of April 11, directly contradicting the RT claim and ISW‘s assessment that Ukrainian forces retain control of the port.[20] The Commander-in-Chief of the Ukrainian Armed Forces stated the Ukrainian defense is continuing to “hold the city, durably and sustainably.”[21] Russian forces will likely complete the capture of Mariupol in the coming week but have likely suffered high losses. 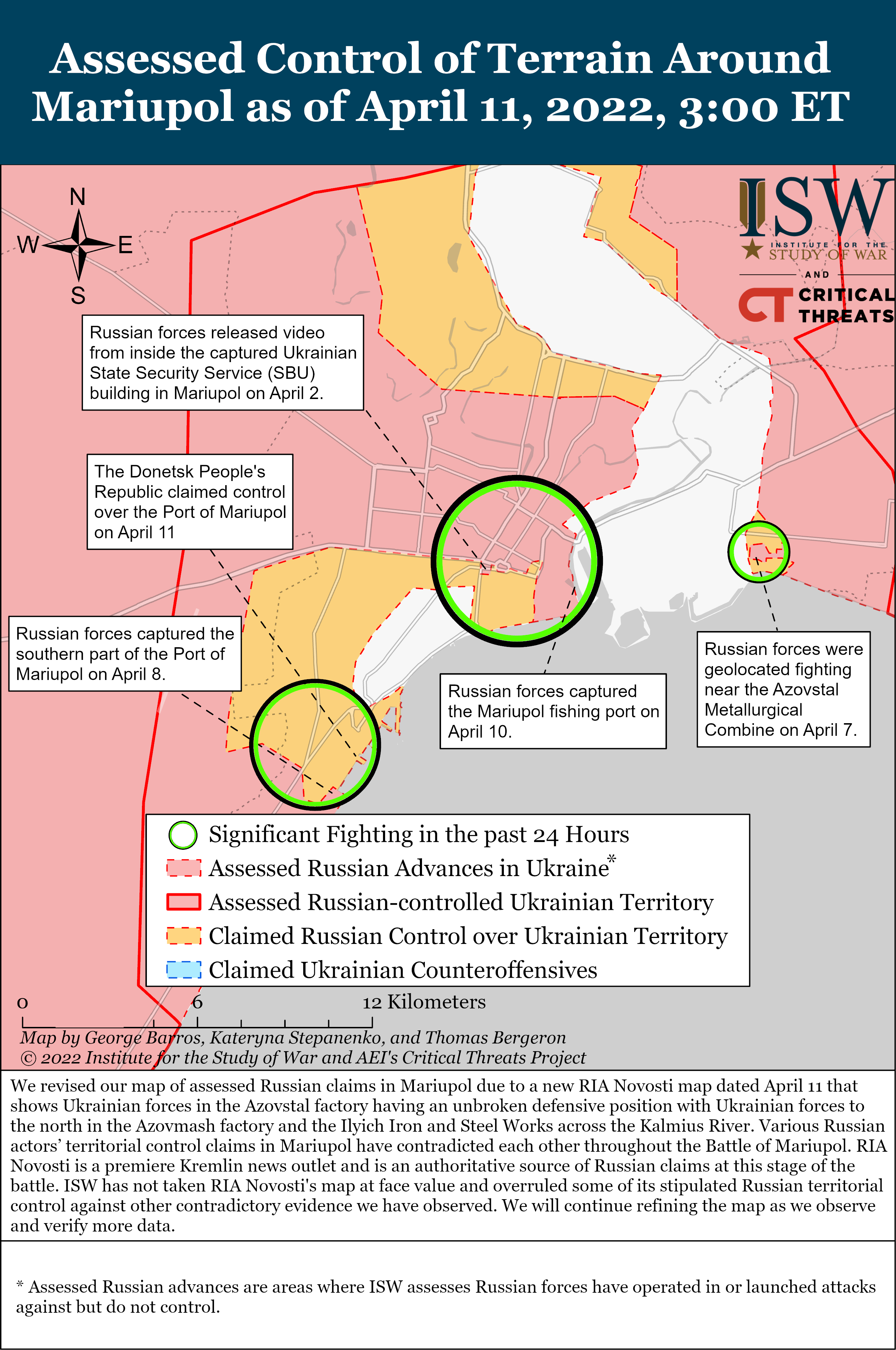 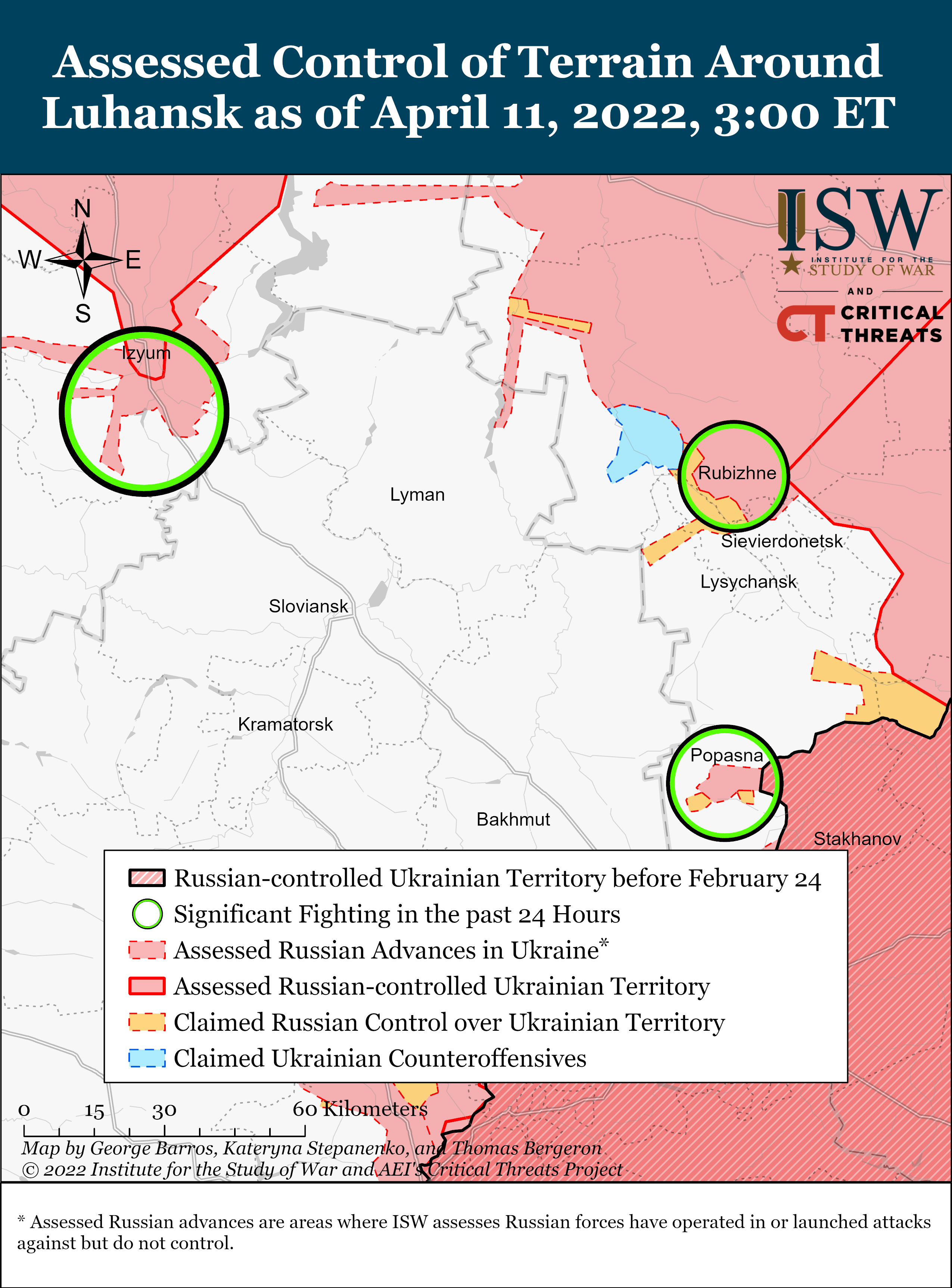 Russian forces did not make any significant advances against Ukrainian positions in Kherson Oblast and continued to attempt to improve their defensive positions on April 11.[31] 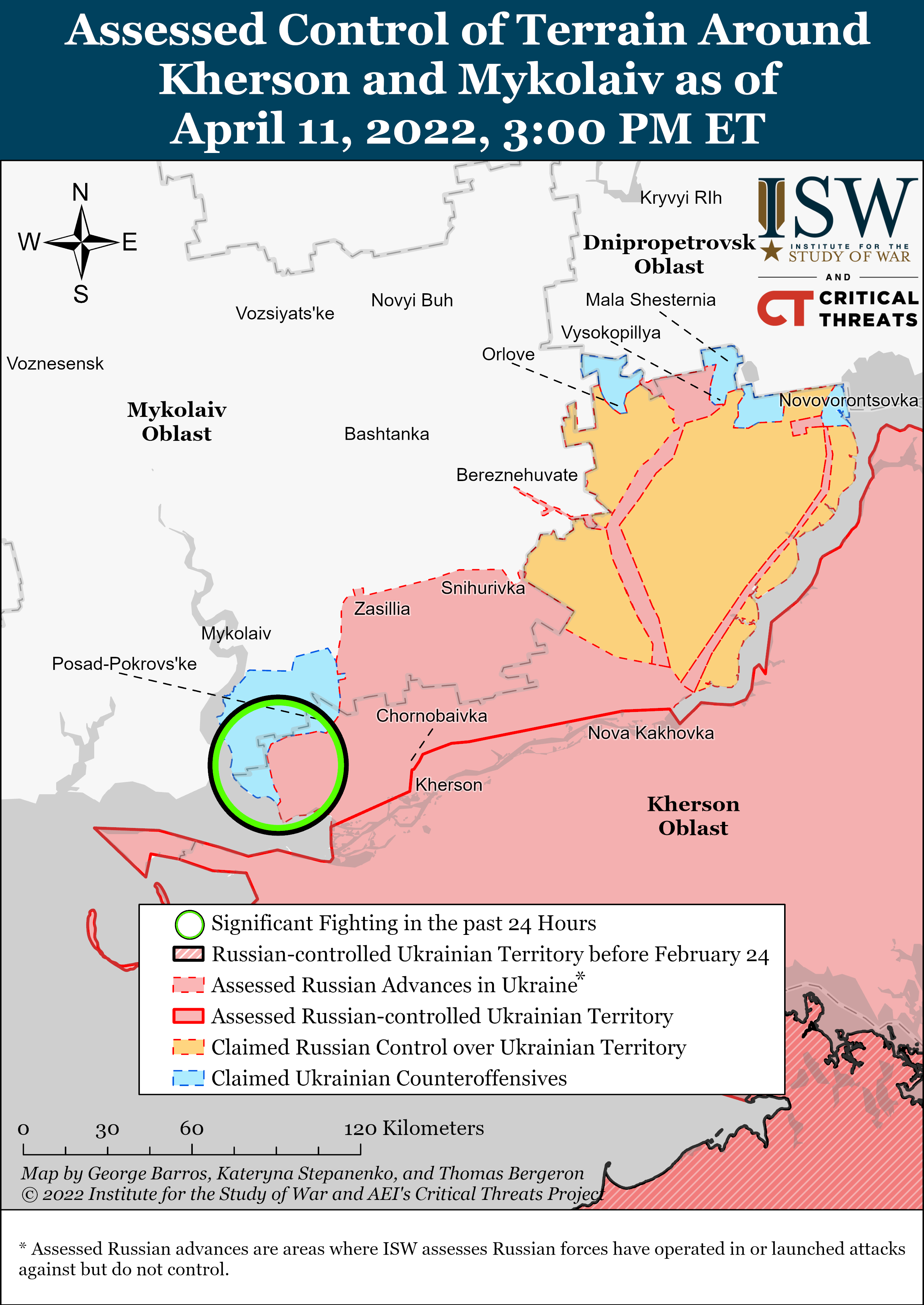 [7] ISW will publish a collection of biographies of current Russian general officers in the coming weeks. We are drawing on this currently unpublished research to inform this assessment of Dvornikov’s career.

[8] The Russian Ministry of Defense overhauled its Military District structure in 2010. The names of the current, post-2010 equivalents of the districts Dvornikov served in are given here for ease.