The Russian missile cruiser Moskva, flagship of the Black Sea Fleet, sunk on April 14 after a likely Ukrainian anti-ship missile strike on April 13. Ukrainian forces claimed to strike the Moskva with two Neptune anti-ship cruise missiles on April 13.[1] The Kremlin denied this claim and stated the Moskva suffered damage from an accidental fire and ammunition explosion.[2] Initial Ukrainian claims to have sunk the warship on April 13 were likely false, but the Russian Ministry of Defense confirmed the Moskva sank in a storm while being towed to Crimea after the crew evacuated.[3] ISW cannot independently confirm that a Ukrainian strike sunk the Moskva, though Ukrainian forces likely have the capability to have done so.

The loss of the Moskva—regardless if from a Ukrainian strike or an accident—is a major propaganda victory for Ukraine. The sinking of the Moskva, which was involved in the infamous “Snake Island” incident in the early days of the Russian invasion, is a boon to Ukrainian morale as a symbol of Ukrainian capabilities to strike back at the Russian navy. The Kremlin will conversely struggle to explain away the loss of one of the most important vessels in the Russian fleet. The Kremlin’s current story of losing the flagship of the Black Sea Fleet due to an accidental fire and ammunition explosion will, at minimum, likely hurt Russian morale and cannot be hidden from the Russian domestic audience. Both explanations for the sinking of the Moskva indicate possible Russian deficiencies—either poor air defenses or incredibly lax safety procedures and damage control on the Black Sea Fleet’s flagship.

The loss of the Moskva will degrade Russian air defenses in the Black Sea but is unlikely to deal a decisive blow to Russian operations on the whole. The Moskva is unlikely to have supported Russian strikes on Ukrainian land targets and primarily provided air defense coverage to Russia's Black Sea Fleet. Ukraine's possibly demonstrated ability to target Russian warships in the Black Sea may change Russian operating patterns, forcing them to either deploy additional air and point-defense assets to the Black Sea battlegroup or withdraw vessels from positions near the Ukrainian coast. 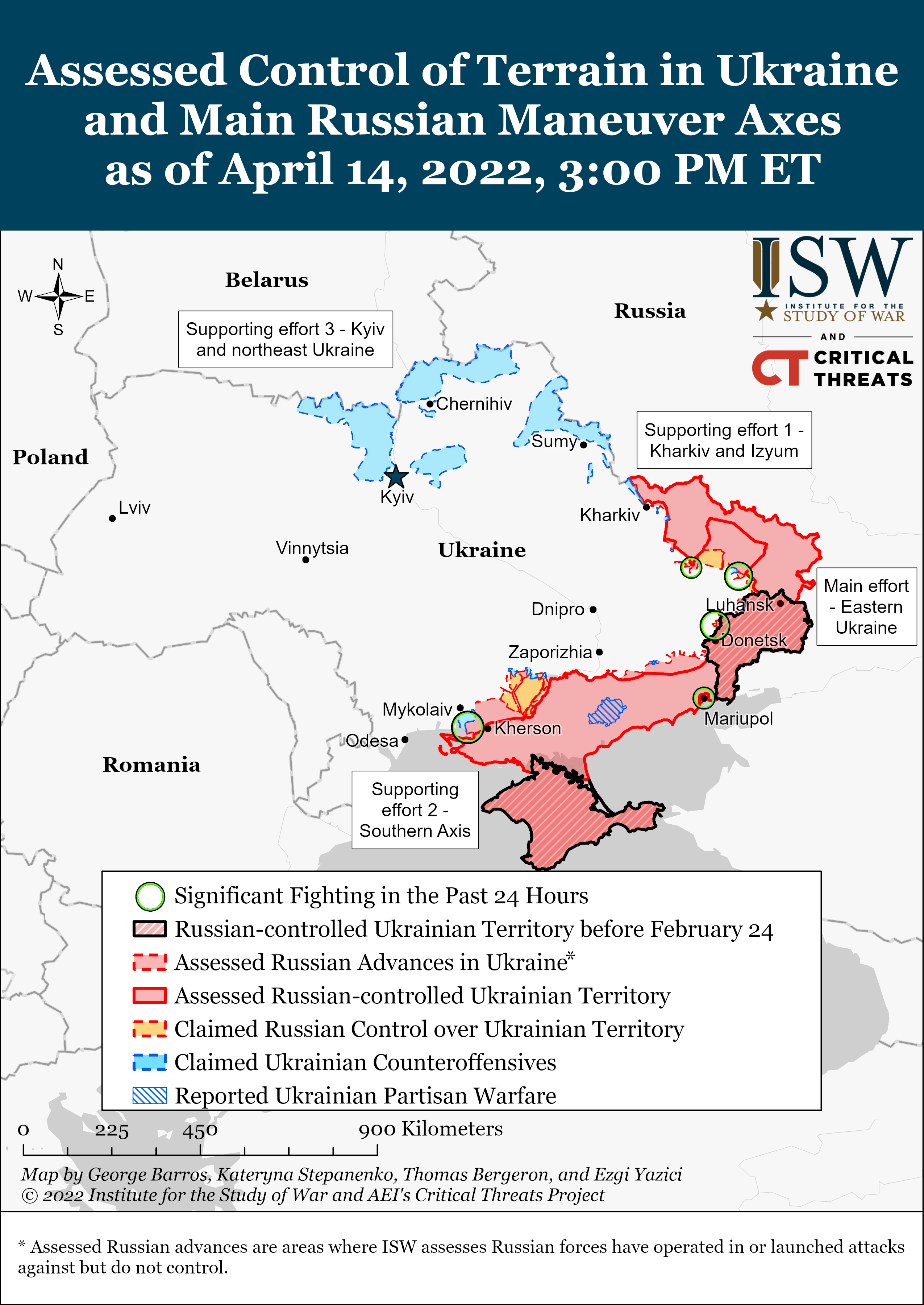 The Ukrainian General Staff reported Russian conscription measures in Donbas have been largely unsuccessful, reporting Russia sought to mobilize 60-70,000 personnel by an unspecified date and has only recruited 20% of its goal.[4] ISW cannot independently confirm these reports, though they are consistent with the demoralization observed among Russian and proxy personnel. The Ukrainian General Staff additionally reported that unspecified elements of Russia’s Northern Fleet and 8th Combined Arms Army are preparing to deploy to Ukraine, though the Russian military likely has little effective combat power remaining to send to Ukraine.[5]

Russian forces continued assaults against Ukrainian defenses in southwestern and eastern Mariupol on April 13, though ISW cannot confirm any territorial changes. Ukrainian officials admitted on April 14 that Russian forces captured “some” personnel from Ukraine's 36th Marine Brigade during their breakout from the Ilyich plant to link up with Ukrainian forces in the Azovstal plant in eastern Mariupol on April 13.[6] Petro Andryushenko, advisor to Mariupol’s mayor, provided a detailed report on April 14 on areas of active fighting in Mariupol, which we used to refine our control of terrain assessment in the accompanying maps.[7] Andryushenko said Russian forces are concentrated on capturing the Mariupol port in the southwest with heavy air and artillery support, contradicting Russian claims to have previously captured the port.[8] Andryushenko further stated that Russian forces are strictly controlling entry and exit in Mariupol and are “filtering” Ukrainian civilians—a term used by Russian forces elsewhere in Ukraine to describe searches, interrogations, and possible targeted killings of Ukrainian civilians.[9] 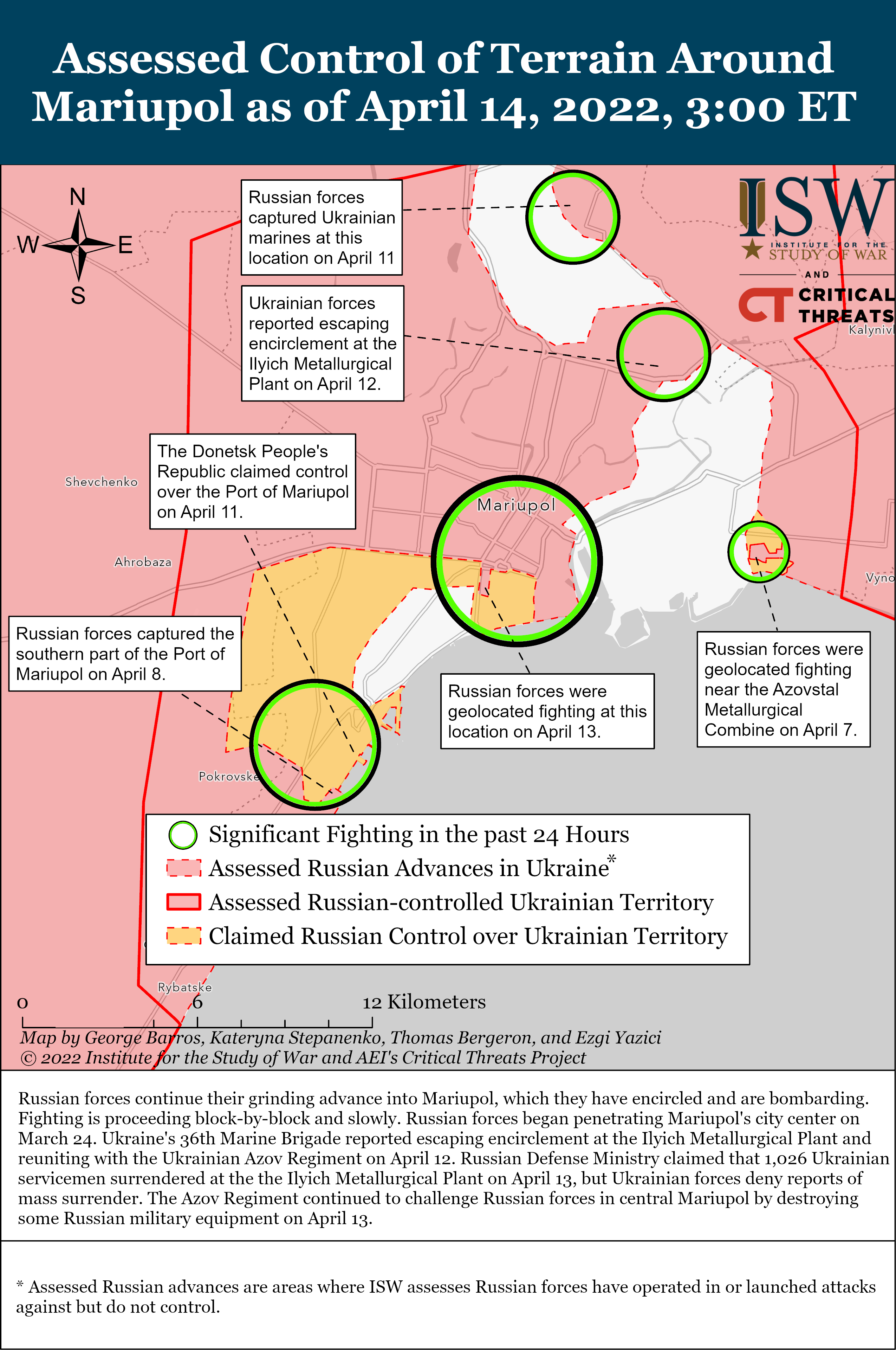 The Ukrainian General Staff reported on April 14 that elements of Russia’s 2nd Combined Arms Army—which was previously withdrawn from the Chernihiv axis—are deploying around Severodonetsk.[10] If confirmed, this is the first Russian unit withdrawn from fighting in northeastern Ukraine to be recommitted to eastern Ukraine. These units likely remain degraded, and Russian forces will face challenges integrating units from several military districts into a cohesive fighting force.[11]

Russian forces continued unsuccessful daily attacks against Rubizhne, Popasna, and Marinka and did not make any territorial advances on April 14.[12] The DNR claimed its forces drove back Ukrainian forces around Marinka on April 14, but ISW cannot independently confirm this claim.[13] The UK Ministry of Defense reported on April 14 that Russian forces in eastern Ukraine are employing “massive rocket and artillery strikes,” consistent with reports on the ground of continued Russian shelling along the line of contact.[14] 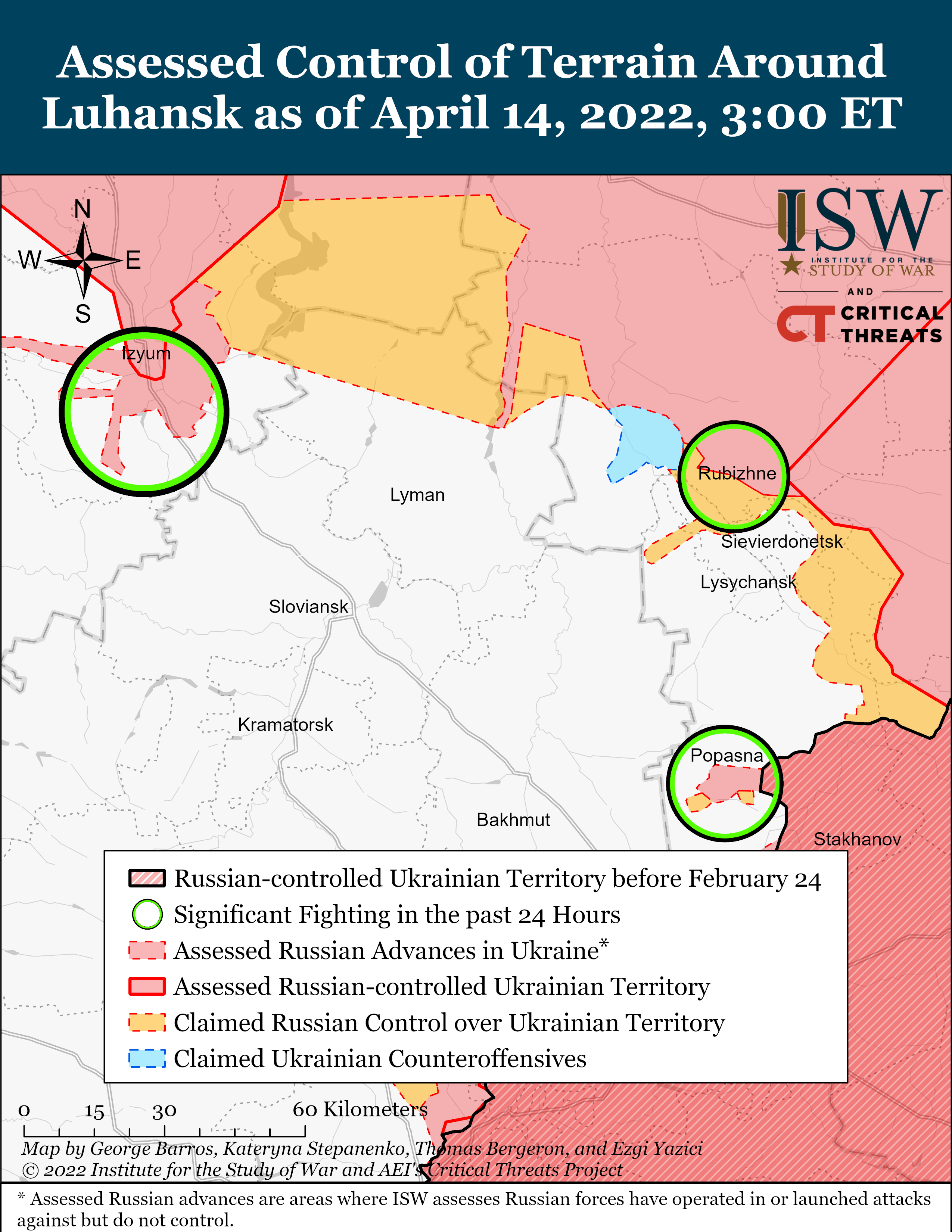 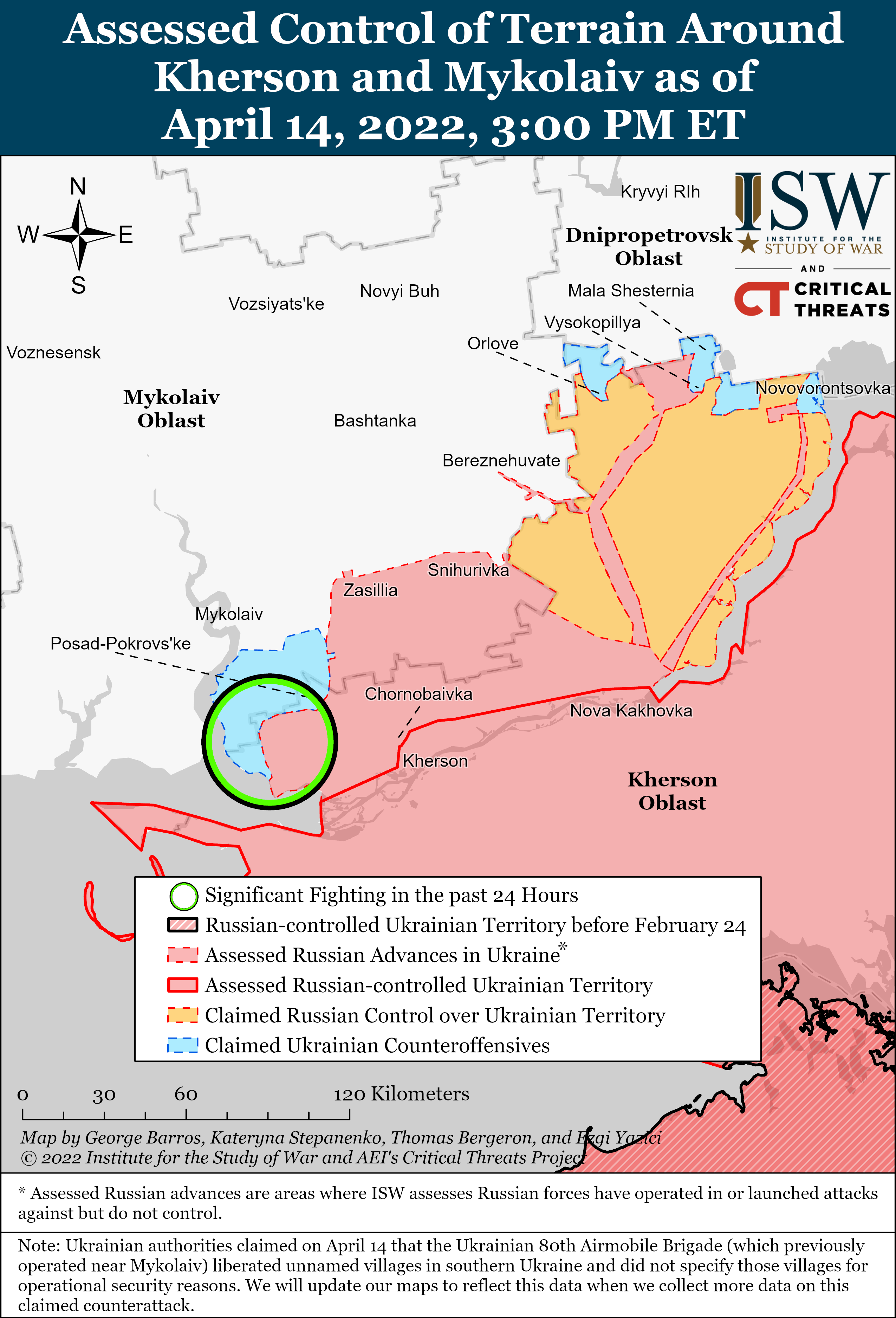 Russian forces continued to redeploy from Belarus to Russia for further deployment to eastern Ukraine. The Ukrainian General Staff reported several Central Military District units are redeploying from Bryansk and Kursk Oblasts (near Chernihiv and Sumy) to Belgorod and Voronezh Oblasts (along the Kharkiv axis) but have not been recommitted to combat operations as of April 14.[23] Elements of the 36th Combined Arms Army of the Eastern Military District are also likely redeploying from Gomel Oblast, Belarus, to western Russian Oblasts.[24] Commercial satellite imagery taken on April 12 confirmed that Russian aircraft have predominantly departed Belarusian airfields for likely redeployment to the Izyum axis or eastern Ukraine, though ISW cannot confirm their final destination.[25]