Russian forces continued small-scale, tactical attacks on the Izyum and Severodonetsk axes; additional reinforcements to date have not enabled any breakthroughs of Ukrainian defenses. Russian forces continue to deploy reinforcements to eastern Ukraine but show no indication of taking an operational pause. The Russian military appears to be carrying out an approach in eastern Ukrainian similar to its failed efforts north of Kyiv in early March—continuing to funnel small groups of forces into unsuccessful attacks against Ukrainian defensive positions without taking the operational pause that is likely necessary to prepare for a more successful offensive campaign. Russian forces continue to grind down Ukrainian defenders in Mariupol, though ISW cannot currently assess how long these forces will hold out and their current supply status. 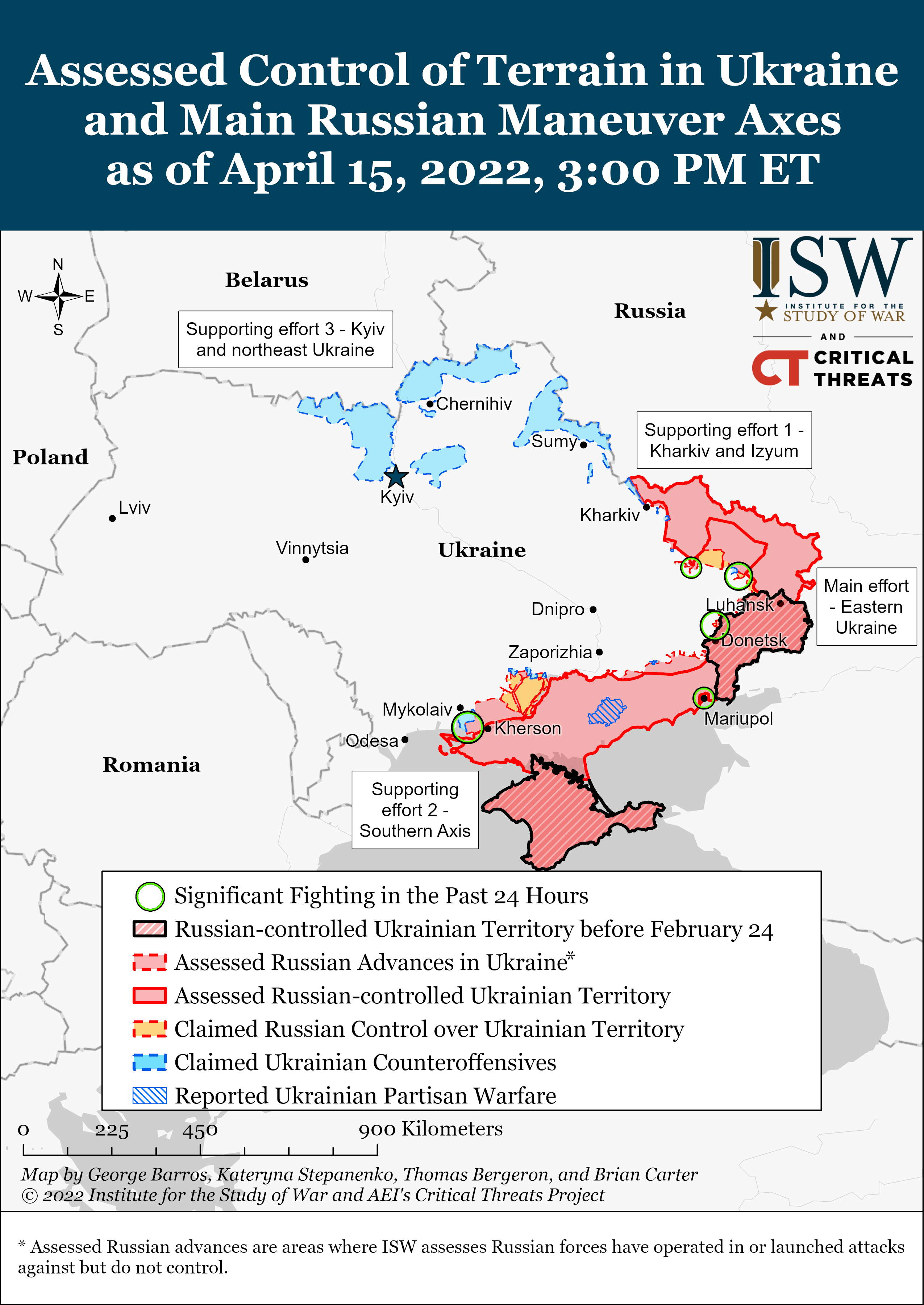 Ukrainian military intelligence reported on April 15 that sanctions are increasingly disrupting Russia’s ability to replace equipment losses.[1] The GUR stated that Uralvagonzavod, the largest tank manufacturer in the world and producer of Russia’s T-72 main battle tank, is facing rising interest rates on loans, rising prices on materials and components (including armored steel), and shortages of imported components. The GUR said that Russian import substitution efforts are failing to maintain existing contracts.

Russian forces continued to grind down Ukrainian defenses in southwestern and eastern Mariupol on April 15, though ISW cannot confirm any major new territorial changes.[2] The commander of Ukraine’s 36th Marine Brigade stated on April 15 that the situation in Mariupol is “deteriorating” and that Russian forces are “aggressively attacking” Ukrainian positions but said Ukrainian forces would not surrender.[3] Petro Andryushenko, advisor to Mariupol’s mayor, said Russian forces are deploying unspecified heavy weapons and artillery to the Iliych area to support assaults on the Azovstal Steel Plant, though ISW cannot independently confirm this report.[4] The Ukrainian Defense Ministry reported that Russian long-range Tu-22M3 bombers struck Mariupol on April 15 for the first time in the war amid continued heavy Russian shelling and widespread reports of damage to the city.[5] Russian forces will likely increase their pace of air and artillery strikes due to the slow pace of ground assaults against entrenched Ukrainian defenders. 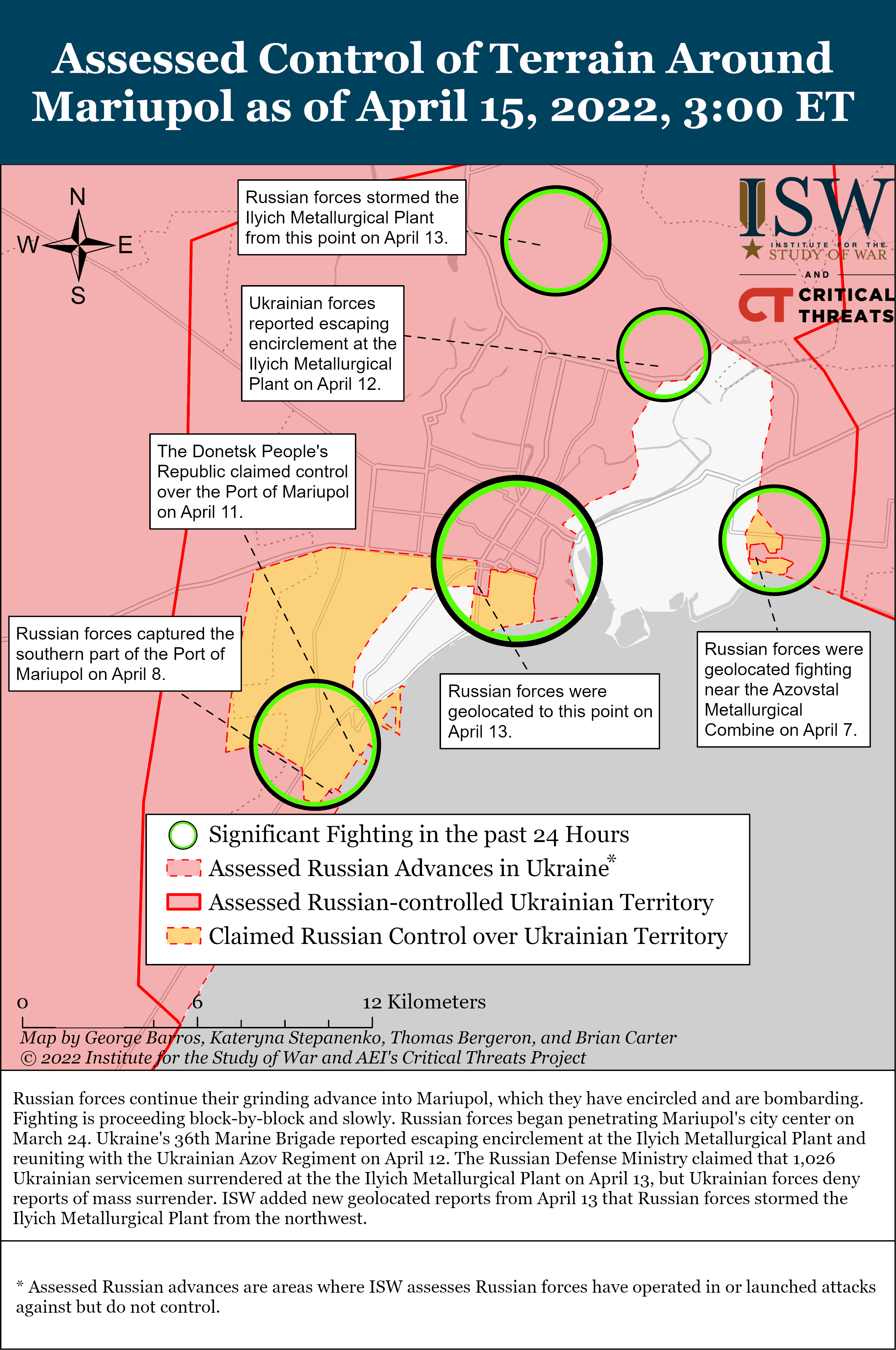 Russian forces continued unsuccessful daily attacks against Rubizhne, Popasna, and Marinka and heavy shelling along the line of contact in eastern Ukraine but did not make any territorial advances on April 15.[6] Ukraine’s Defense Ministry stated on April 15 that Russia's 58th and 8th Combined Arms Armies are the primary Russian forces in Donbas, in addition to the 1st and 2nd Army Corps of the DNR and LNR, respectively.[7] Russian forces likely require a true operational pause to cohere the forces that could enable them to advance through frontal assaults in eastern Ukraine. 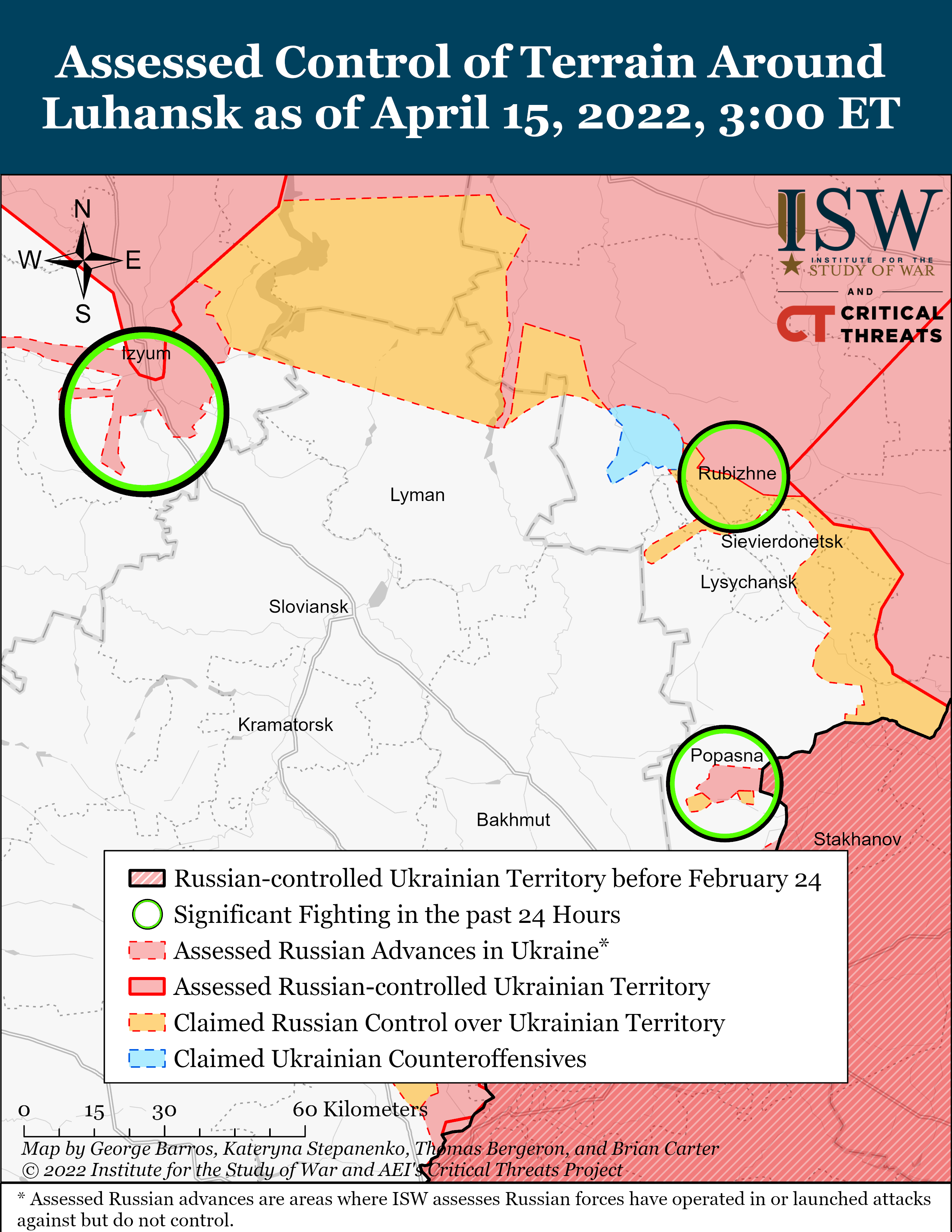 There has been no significant change around Kherson in the past 24 hours. Russian forces conducted limited attacks on Ukrainian positions west of Kherson and continued to shell Mykolayiv but did not make any advances.[11] 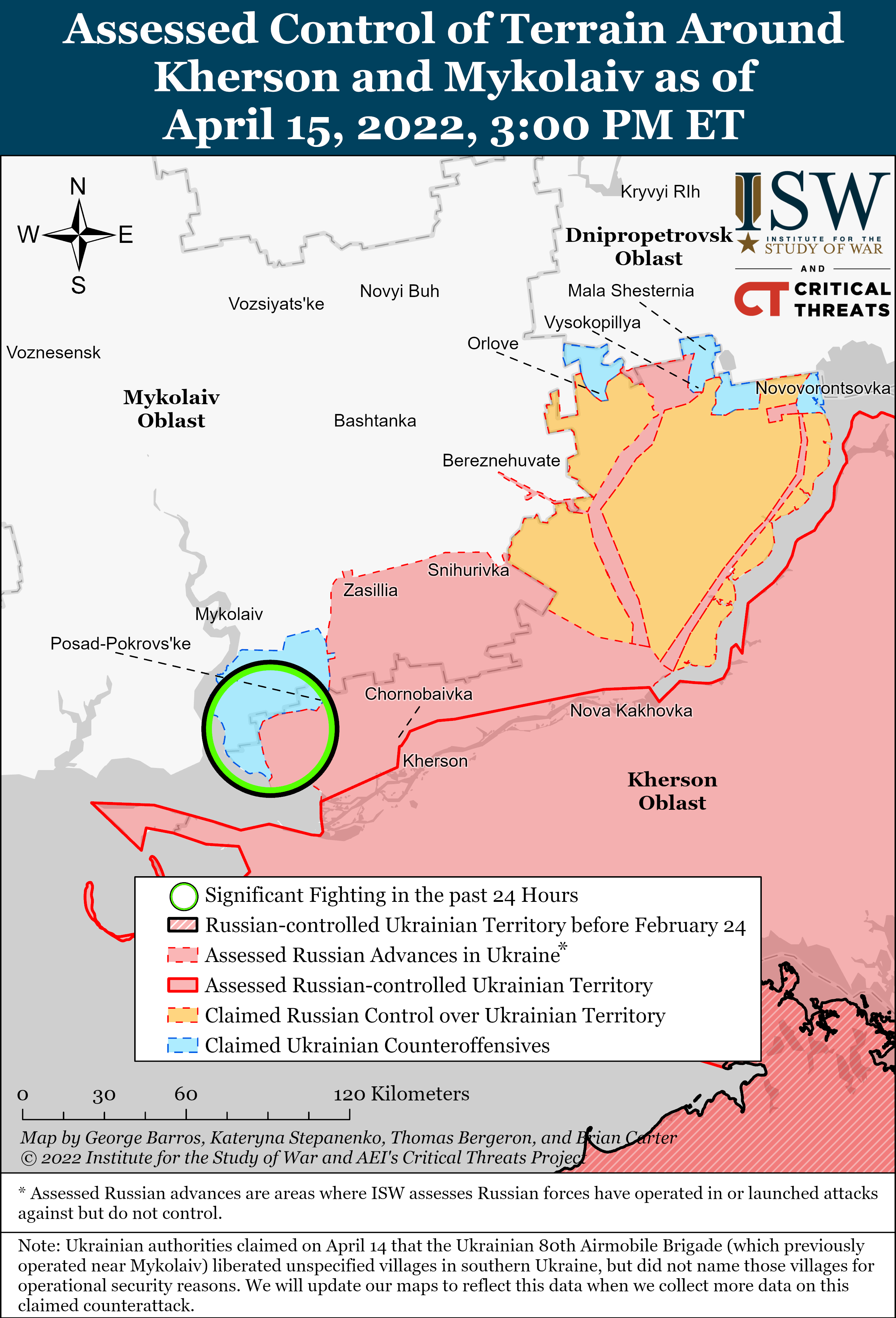