Russian and Ukrainian officials announced that the next phase of the Russian invasion of Ukraine began on April 19. Russian forces conducted intensive artillery and air bombardments of many areas along the front line from around Izyum to Mykolaiv but relatively few ground offensive operations. Russian forces continue to receive personnel and equipment reinforcements as well as command-and-control and logistics capabilities even as they conduct air and artillery preparations and some mechanized advances.

The Russians have not fully set conditions for a large-scale offensive operation. The Russians have not had enough time to reconstitute forces withdrawn from the Battle of Kyiv and ready them properly for a new offensive in the east. The Russians appear to be still building logistics and command-and-control capabilities even as they start the next round of major fighting. The tempo of Russian operations continues to suggest that President Vladimir Putin is demanding a hasty offensive to achieve his stated objectives, possibly by “Victory Day” on May 9. The haste and partial preparation of the Russian attack will likely undermine its effectiveness and may compromise its success.

Russian forces appear to be attempting to conduct a wide encirclement of Ukrainian troops along axes from Izyum to the southeast and from Donetsk City to the north even as they push west from Popasna and positions north of Severodonetsk. Russian ground offensives in the last 24 hours occurred around Izyum, Kreminna (north of Severodonetsk), and from Donetsk City toward Avdiivka. Only the advance to and possibly through Kreminna made significant progress. An encirclement on this scale would likely take considerable time to complete against Ukrainian resistance. Even if the Russians did complete such an encirclement and trapped a large concentration of Ukrainian forces inside one or more pockets, the Ukrainian defenders would likely be able to hold out for a considerable period and might well be able to break out.

The Russians may alternatively try to complete several smaller encirclements simultaneously, each trapping fewer Ukrainian forces and therefore taking less time to complete and then reduce. Coordinating such operations is complicated and beyond the planning and execution capacities the Russian army has demonstrated in the conflict thus far.

Ukrainian forces continue to defend parts of the Azovstal complex in Mariupol, but Russian officials and media are gathering in and near the city, likely in preparation to declare victory in the coming days whether or not fighting continues. 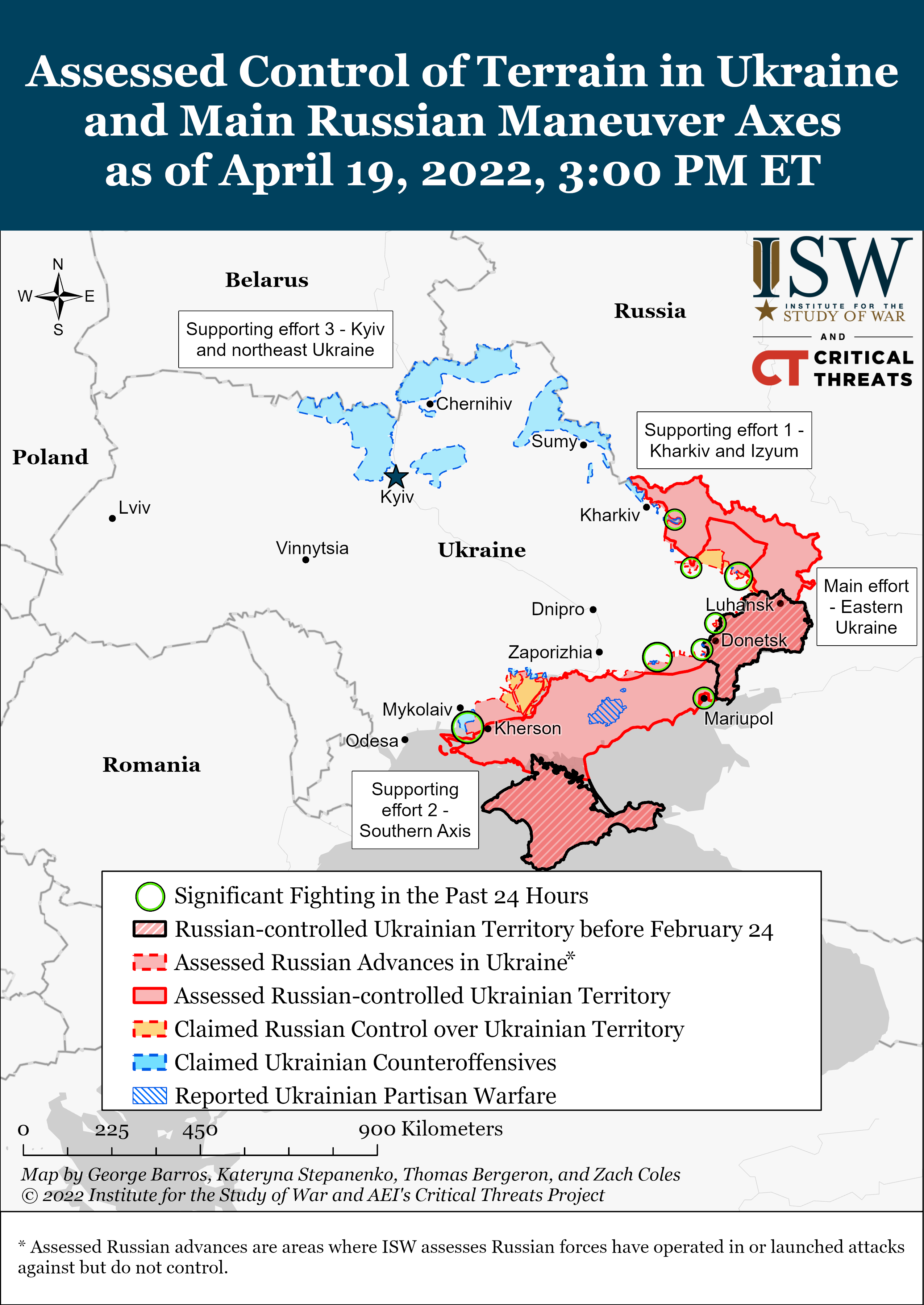 Russian forces continued to prioritize the capture of the Azovstal steel plant from the north but did not make any significant advances as of April 19. Donetsk People’s Republic (DNR) Head Denis Pushilin announced that the capture of Azovstal is the DNR’s main priority, and People’s Militia Spokesperson Eduard Basurin said that an assault with Russian forces began on April 19.[1] The advisor to the Ukrainian mayor of Mariupol, Petro Andryushenko, said that Russian forces gathered heavy weaponry and tanks in the city’s Left Bank District near the plant but continued to shell residential streets in the neighborhood.[2] Russian forces conducted an airstrike on the northern end of the plant on April 18.[3] Russian social media accounts published photos of Russian forces entering a warehouse near Azovstal, but ISW cannot confirm the authenticity or location of the images.[4]

Russia’s Defense Ministry made another demand for Ukrainian Azov Regiment fighters to surrender, which Mariupol’s defenders refused. Ukrainian forces maintained their positions at the plant and continued limited street fighting in central Mariupol.[5]

The Kremlin is likely attempting to accelerate the capture of Mariupol for the domestic Russian information space judging from the large presence of Kremlin-sponsored journalists in the area.[6] The Russians may announce success even if Ukrainian forces retain their hold on portions of Azovstal, or they may wait until Russian or proxy forces have secured the entire facility. 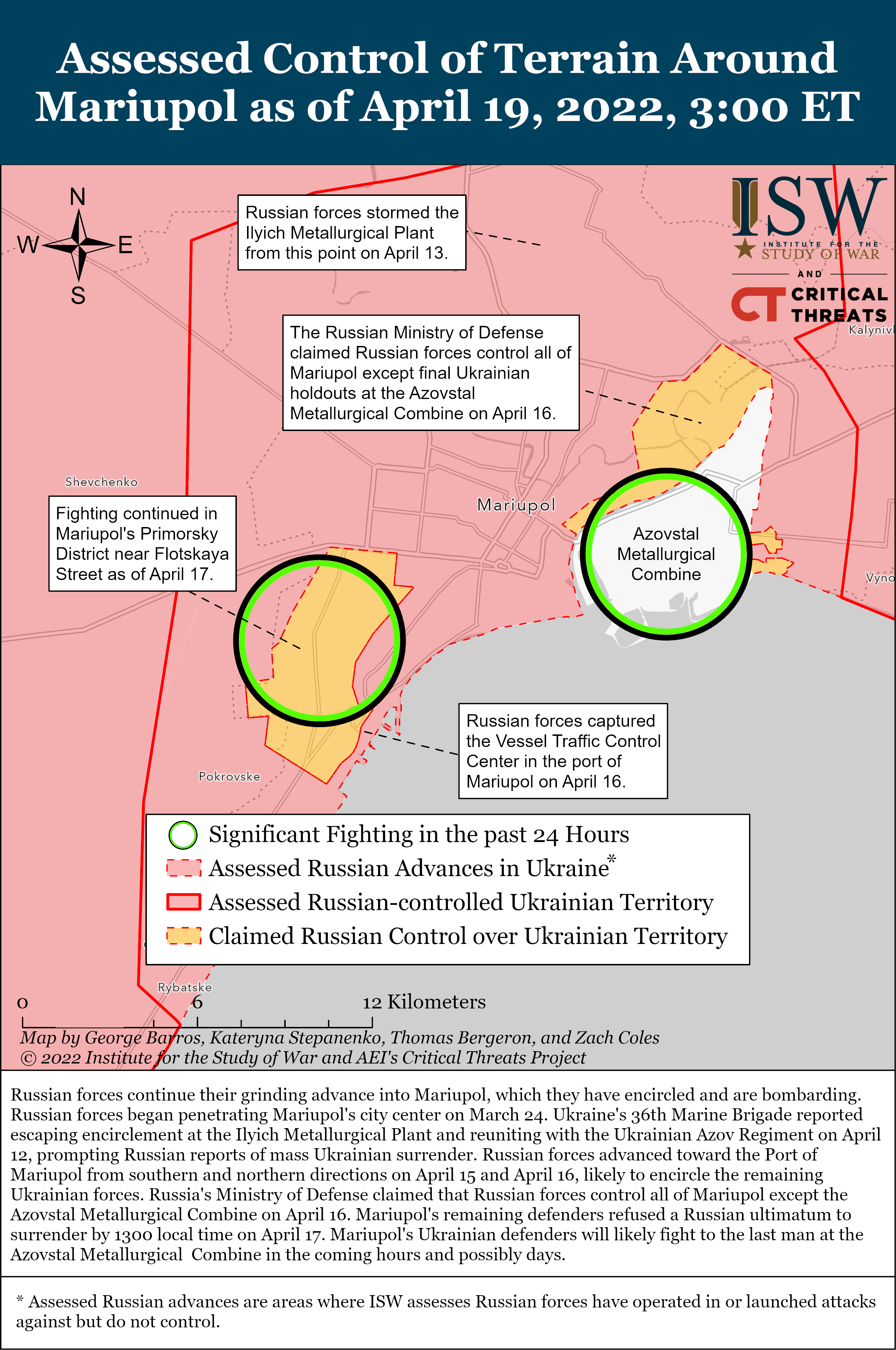 Russian forces intensified offensive operations in Donetsk and Luhansk oblasts on April 19.[7] Russian artillery fire continued to target Popasna, Rubizhe, Lysychansk, and Severodonetsk and shell various settlements in Donetsk Oblast over the last 24 hours.[8] The Ukrainian Ministry of Defense stated that Russian troops are consolidating in the vicinity of Adviivka and Mariinka.[9] Ukrainian forces reportedly repelled attempted Russian advances into Avdiivka, Popasna, and Rubizhne on the night of April 18.[10] Pro-Russian sources additionally claimed that Russian troops entered Torske in order to encircle Ukrainian positions in Lysychansk, Severodonetsk, and Rubizhne, but ISW cannot independently verify this claim.[11] 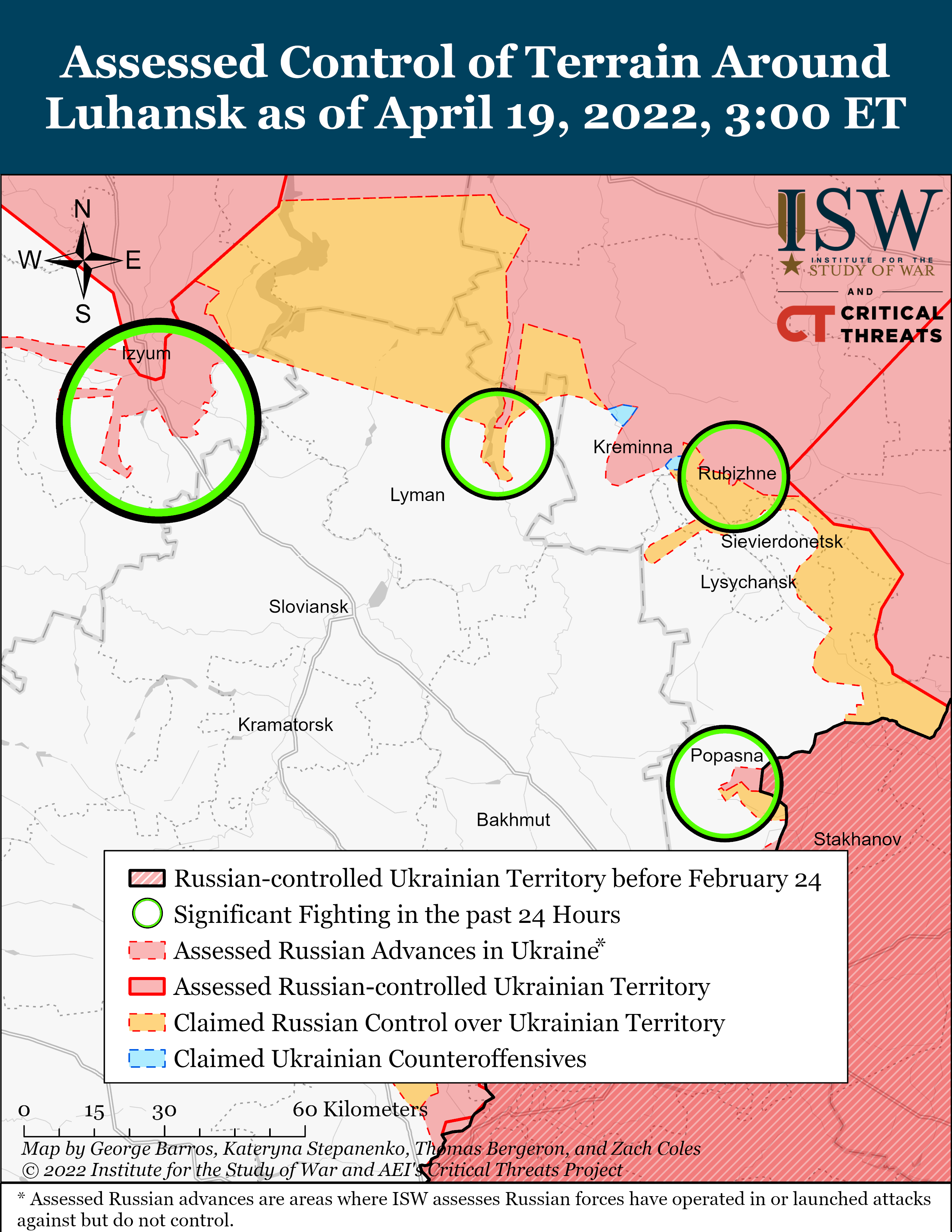 Russian forces continued to shell settlements in Kharkiv Oblast and maintain a partial blockade of Kharkiv city on April 19.[12] The Ukrainian General Staff stated that Russian troops mounted an unsuccessful offensive to the south of Izyum and are generally conducting offensive operations along the east bank of the Siversky Donets River.[13] Vyacheslav Zadorenko, the mayor of Derhachi—which is about 10 miles northwest of Kharkiv City, stated that Russian forces are likely blocking approximately six settlements around Derhachi as of April 10.[14] 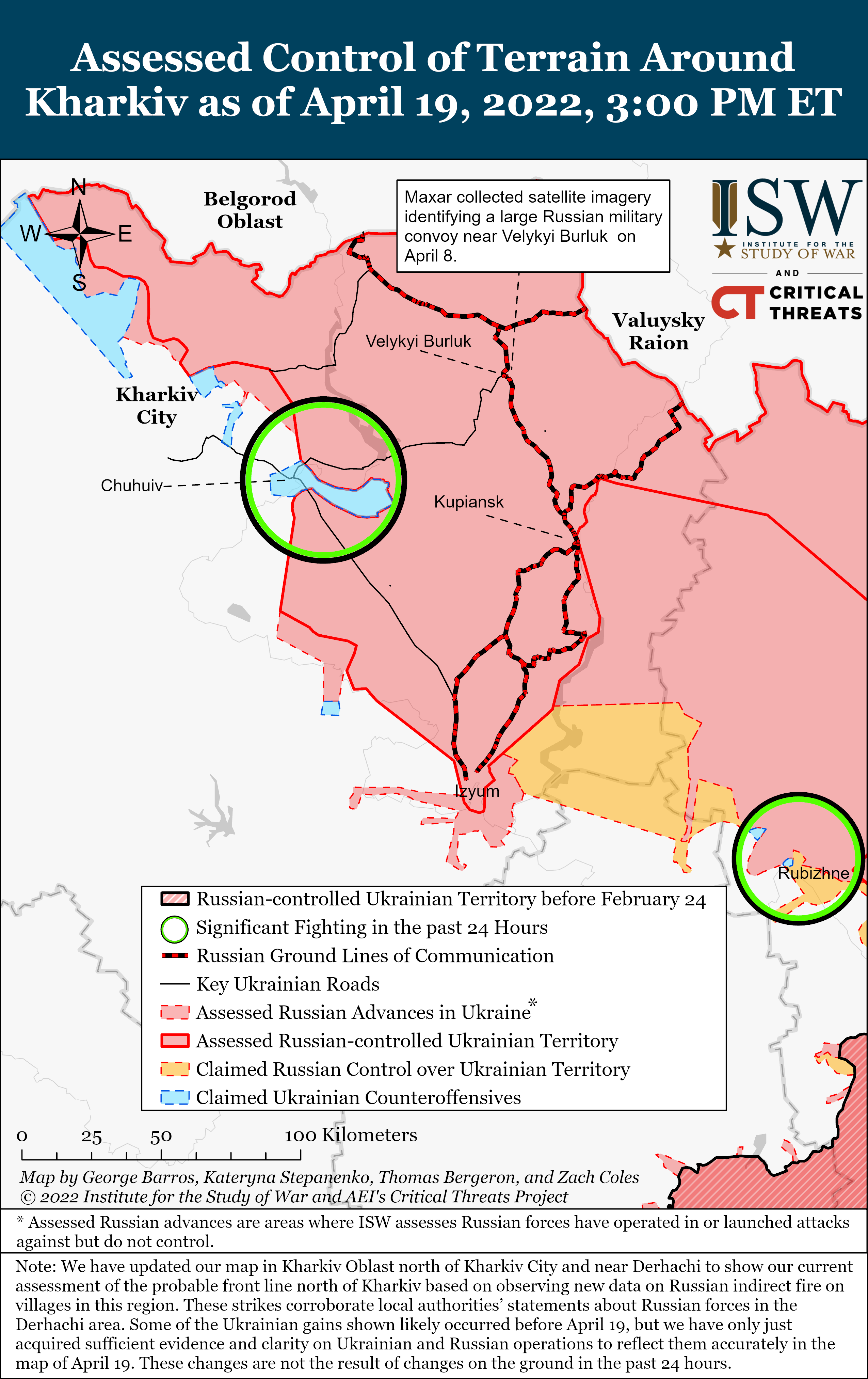 Russian forces continued fighting outside Oleksandrivka on April 19 without any significant territorial changes.[15] Zaporizhia Oblast Head Oleksandr Staruckh reported that Russian units are concentrating in Polohy, central Zaporizhia Oblast.[16] Russian forces may intend to stop Ukrainian counteroffensives in this area or could be planning a more ambitious advance to reach the N15 highway running east from Zaporizhia City. 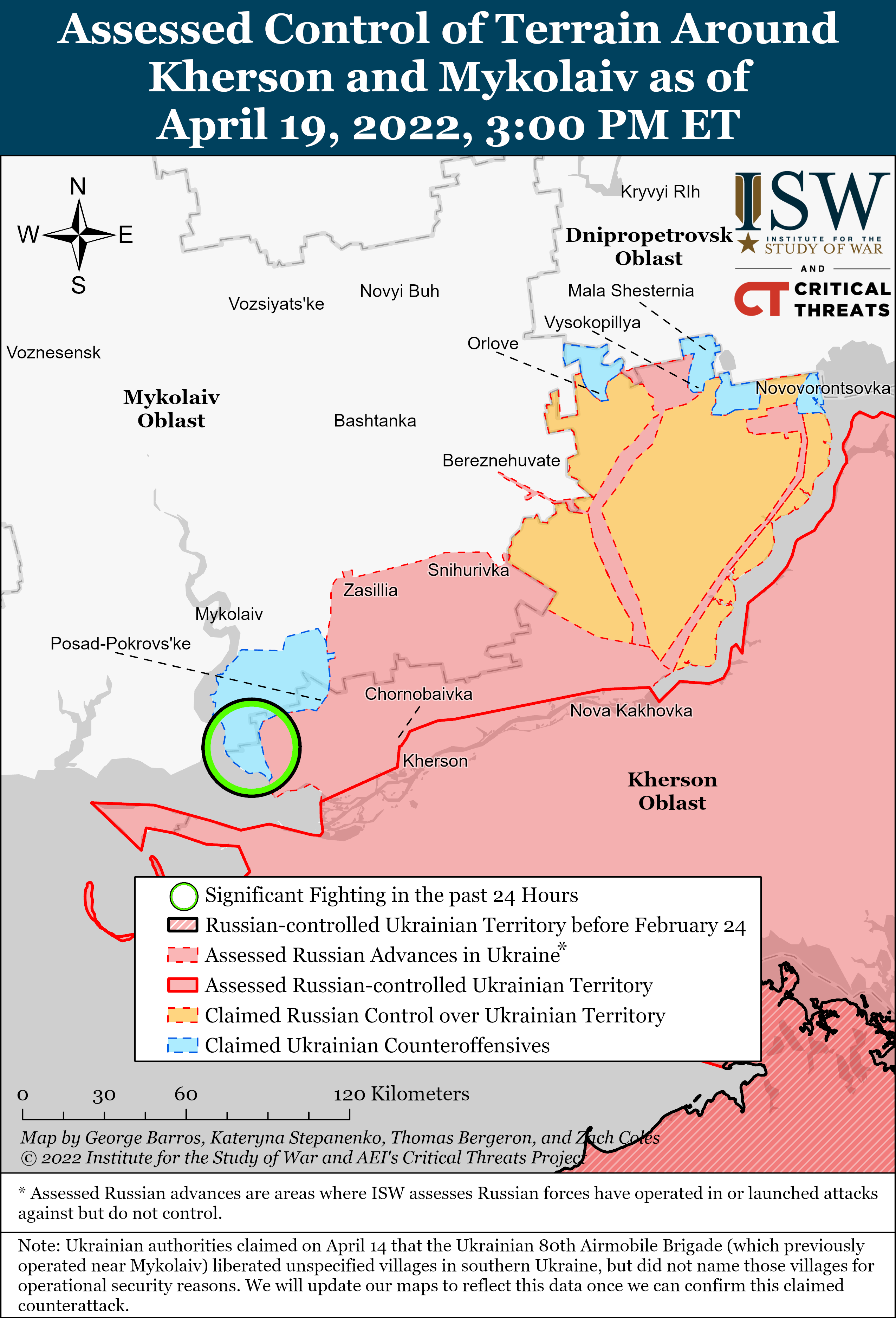