A briefing by the Russian Deputy Commander of the Central Military District on April 22 reiterated standing Russian objectives in eastern and southern Ukraine and did not announce any new operations. Deputy Commander of the Central Military District Rustam Minnekaev gave a speech to the annual meeting of the Union of Defense Industries on April 22 that has been misinterpreted as the announcement of a new Russian campaign.[1] Minnekaev said Russian forces began a new phase of the war two days ago, an unsurprising confirmation of the new phase of the Russian offensive announced by both Russian Foreign Minister Sergey Lavrov and Ukrainian officials on April 19.[2] He stated the primary objective of Russian forces is to capture the entirety of the Donbas region and southern Ukraine to provide a land bridge to Crimea; as ISW has previously assessed, Russian forces seek to capture the entirety of Donetsk and Luhansk Oblasts and retain control of the Kherson region.

Minnekaev stated that Russian control of southern Ukraine provides Russia a future capability to conduct an offensive toward Transnistria, rather than announcing an imminent Russian offensive toward Moldova. Minnekaev said Russian control of southern Ukraine will provide “another way out to Transnistria,” the illegally Russian-occupied strip of territory in Moldova, where he falsely claimed ”there are also facts of oppression of the Russian-speaking population.” We do not read this as a statement of intent to conduct a major offensive operation toward Moldova. An offensive toward Moldova would likely have been phrased around securing a “land corridor” [сухопутный коридор] to Moldova, much like the Russian land corridor to Crimea. Even if Russian forces did seek to resume major offensive operations toward Mykolaiv and on to Odesa, they are highly unlikely to have the capability to do so. 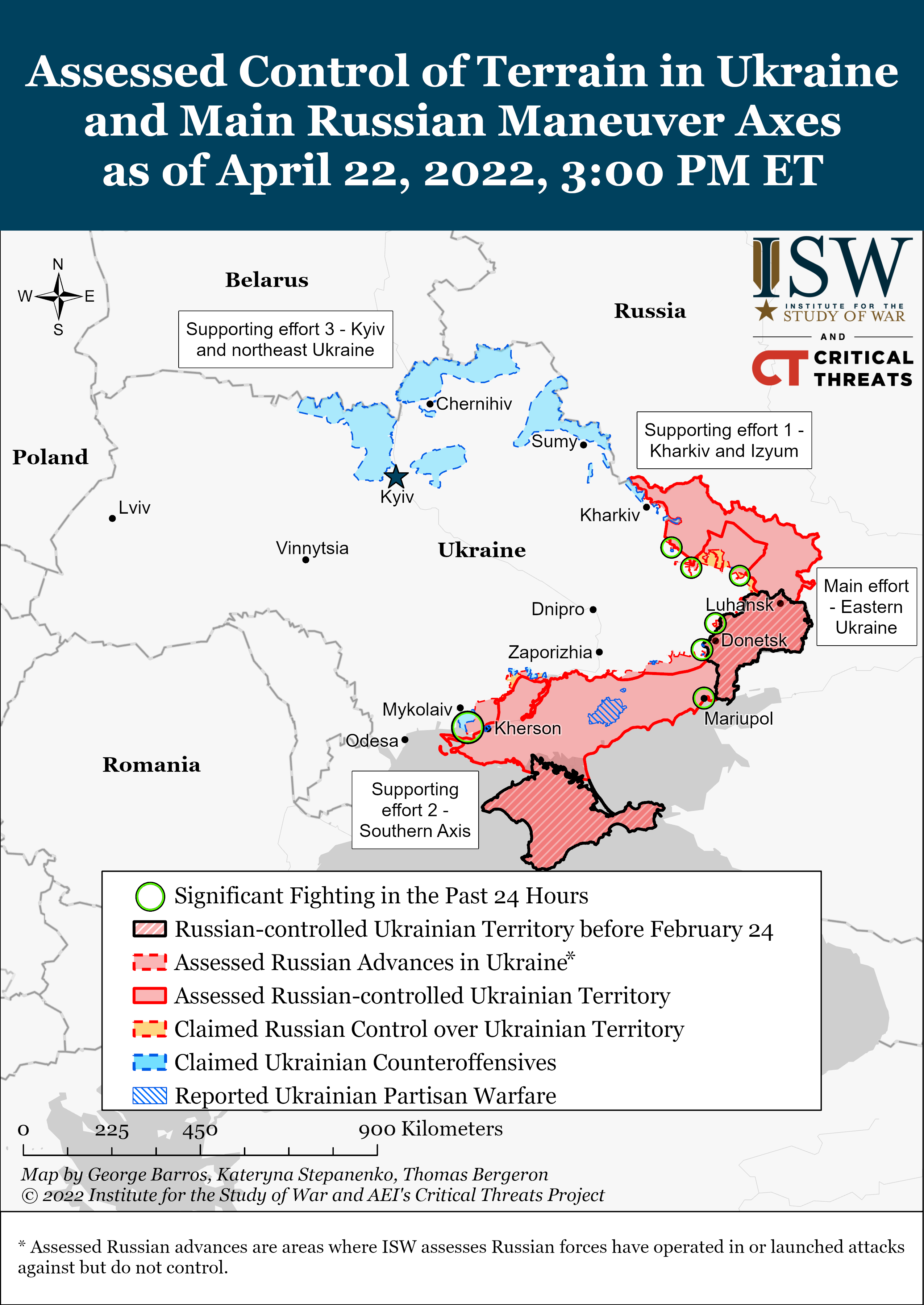 Ukrainian Military Intelligence reported on April 22 that several Russian officers have been fired or imprisoned for failures in Ukraine.[3] The Main Intelligence Directorate (GUR) reported that Russian authorities arrested the Commander of the Black Sea Fleet Admiral Osipov and are investigating Black Sea Fleet Chief of Staff Vice Admiral S. Pinchuk, likely for the loss of the Moskva. The GUR additionally reported the commander of the 6th CAA, the commander and deputy commander of the 1st Guards Tank Army, and the commander of the 22nd Army Corps have all been removed from their posts for unsatisfactory performance. Purges of Russian officers are unlikely to improve Russian capabilities, as replacement commanders will likely be less experienced and under intense pressure to achieve likely unreasonable objectives set by the Kremlin.

Russian forces continued to bombard the Azovstal Steel Plant and besiege the remaining Ukrainian defenders.[4] Several Ukrainian government sources reported on April 22 that Russian forces have abandoned direct attacks on Azovstal but continue to shell the facility and have repeatedly refused Ukrainian requests to open humanitarian corridors to evacuate civilians.[5] Russian and DNR forces continued to consolidate their control of key buildings in Mariupol and are likely setting conditions to set up an occupation government.[6] Several videos circulated on social media of unspecified Russian forces departing Mariupol, but ISW cannot confirm at this time which Russian forces have departed the city or their likely destination.[7] Russian forces seek to starve out the remaining defenders and civilians in Azovstal and are unlikely to allow trapped civilians to leave. The Russian Ministry of Defense stated on April 22 that it will only begin a humanitarian pause in Mariupol when Ukrainian forces “raise white flags” and surrender and claimed that they will run out of food and supplies within two weeks.[8] 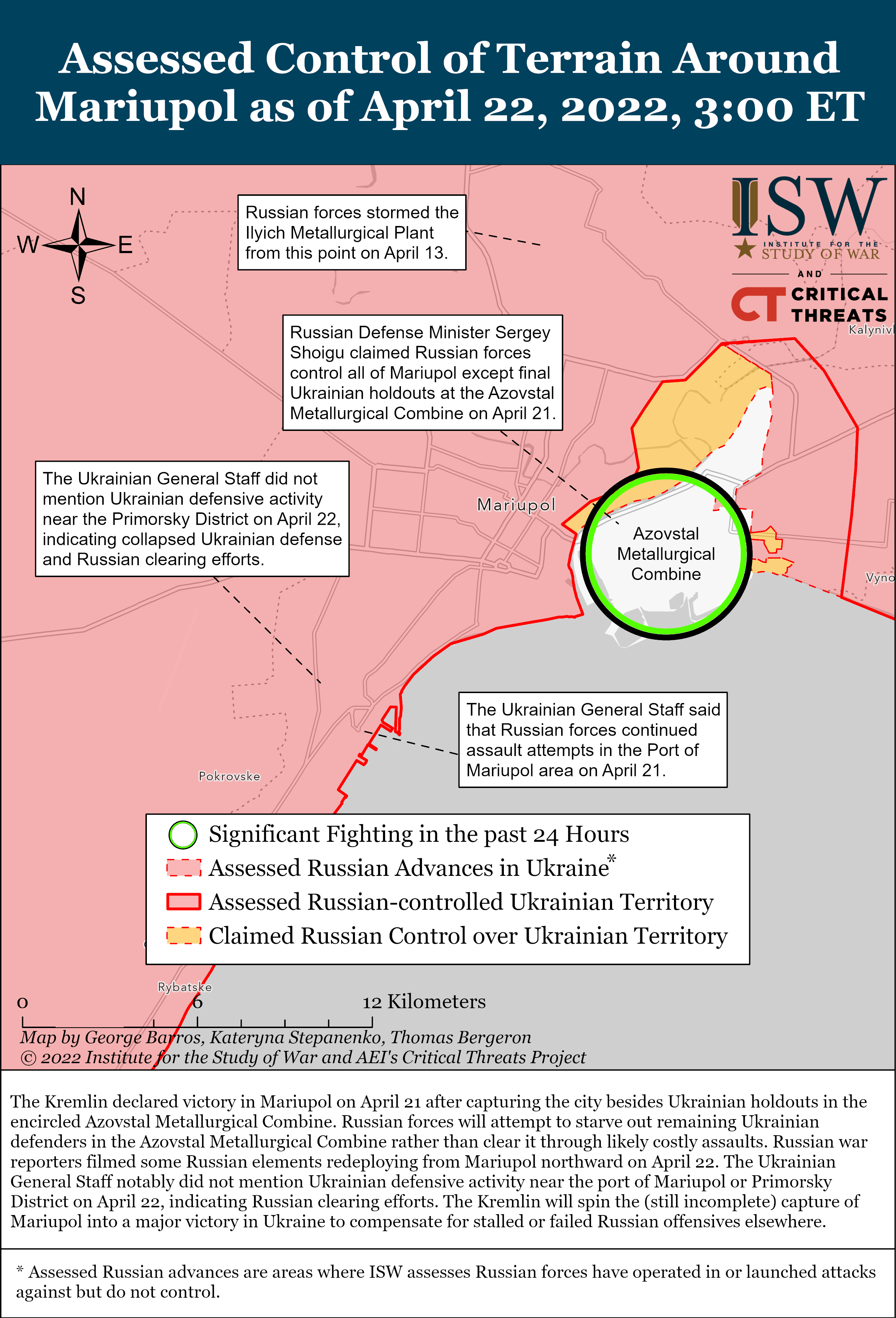 Russian forces continued local attacks along the line of contact in eastern Ukraine (continuing to focus on Rubizhne, Popasna, and Marinka) on April 22 and made minor gains around Slovyansk, capturing the town of Lozova.[9] Russian forces additionally consolidated their recently captured positions to prepare for further assaults.[10] The military situation did not substantially change in the last 24 hours, and Russian forces are continuing to conduct localized attacks while feeding in additional reinforcements instead of pausing to prepare for a wider offensive. The Ukrainian General Staff reported that additional unspecified elements of the 41st Combined Arms Army (CAA) (previously withdrawn from the Chernihiv axis) deployed to eastern Ukraine on April 22.[11] 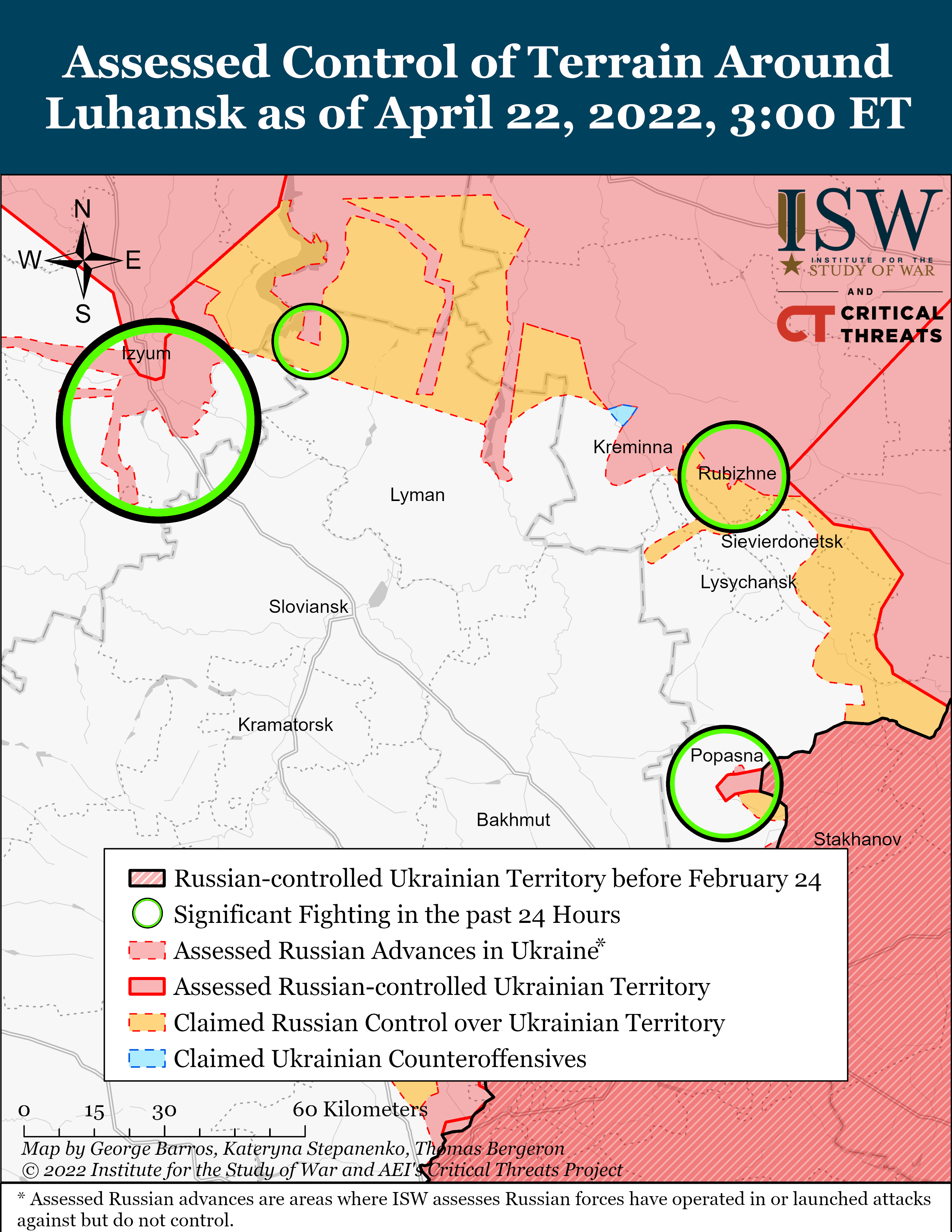 Russian units from the 6th CAA and Baltic and Northern Fleets (the Ukrainian General Staff reported up to seven battalion tactical groups (BTGs), though we cannot independently confirm this number, and these units are likely heavily degraded) continued to partially block Kharkiv and shell the city.[12] A pro-Russian telegram channel reported that Russian forces repelled a Ukrainian counterattack on Kozacha Lopan, north of Kharkiv and just 5km from the Russian border.[13] ISW cannot independently confirm this report, but, if confirmed, it likely indicates Ukrainian efforts to conduct counterattacks north of Kharkiv to the Russian border, possibly threatening Belgorod.[14]

Russian forces conducted localized attacks and reconnoitered Ukrainian positions south of Izyum on April 22 and did not make any advances.[15] Ukraine’s Special Operations Command claimed it destroyed a bridge being used by Russian forces at an unspecified location near Izyum on April 22.[16] The Ukrainian General Staff reported elements of the 1st Tank Army, the 20th and 35th CAAs, the 68th Army Corps, and unspecified airborne troops (many of whom remain highly damaged from fighting around Kyiv and in northeastern Ukraine) are concentrated on the Izyum axis.[17] Social media imagery depicted additional Russian forces concentrating in Belgorod Oblast in Russia on April 20.[18] 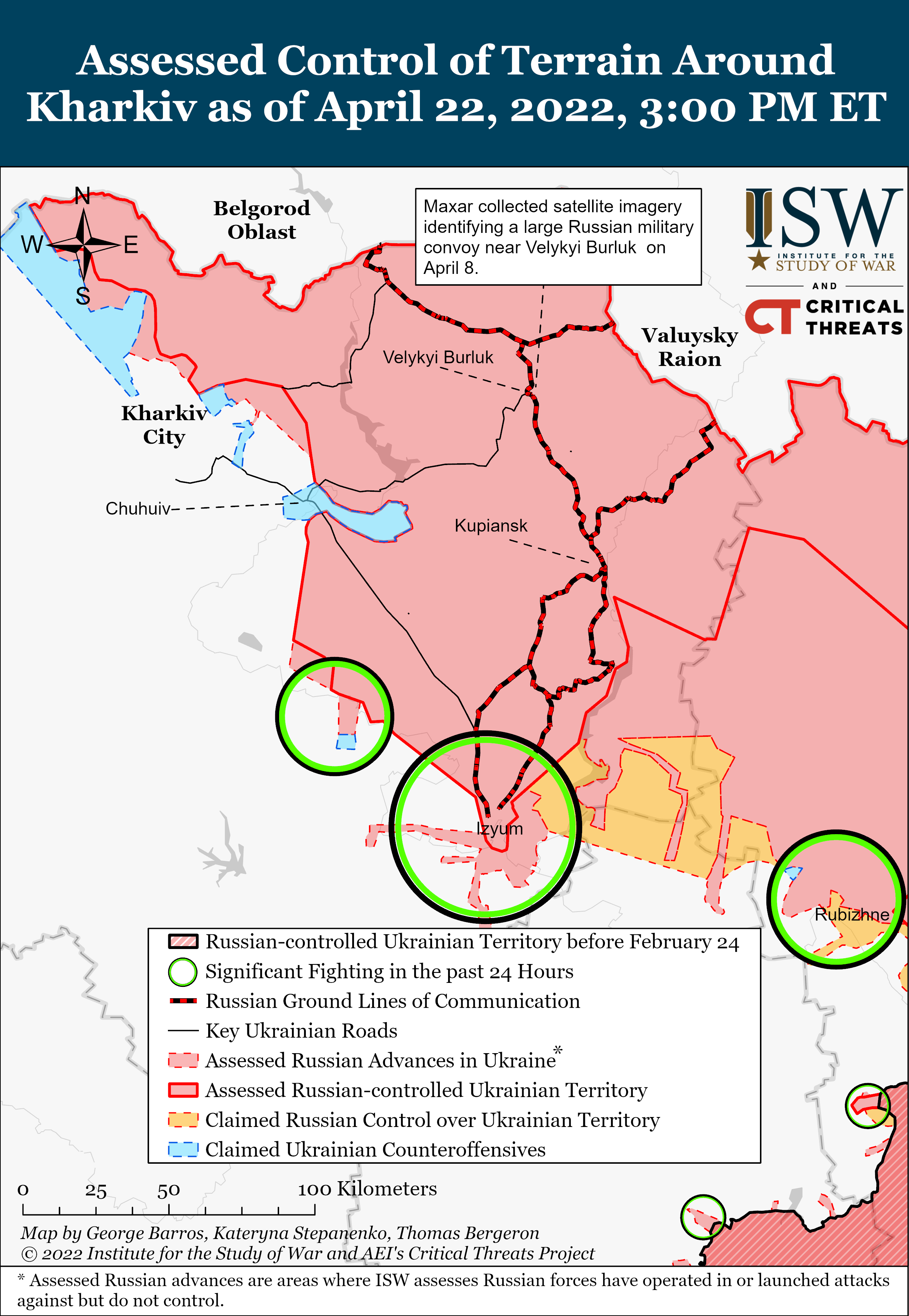 Russian forces conducted unsuccessful attacks on Ukrainian positions west of Kherson and towards Zaporizhia in the last 24 hours.[19] The Ukrainian General Staff reported elements of Russia’s 19th Motor Rifle Division (of the 58th CAA) deployed to the Zaporizhia front, likely to support offensive operations to the north intended to encircle Ukrainian forces in eastern Ukraine, though Russian forces remain highly unlikely to make significant headway in these offensive operations.[20]

The Kremlin is additionally setting conditions to create proxy republics in Zaporizhia and Kherson oblasts to cement Russian control over these regions and conscript Ukrainian manpower. Ukrainian Ministry of Defense spokesperson Colonel Oleksandr Motuzyanyk reported on April 22 that Russian forces are preventing Ukrainian citizens from leaving these regions and are preparing to conscript military-age men.[21] 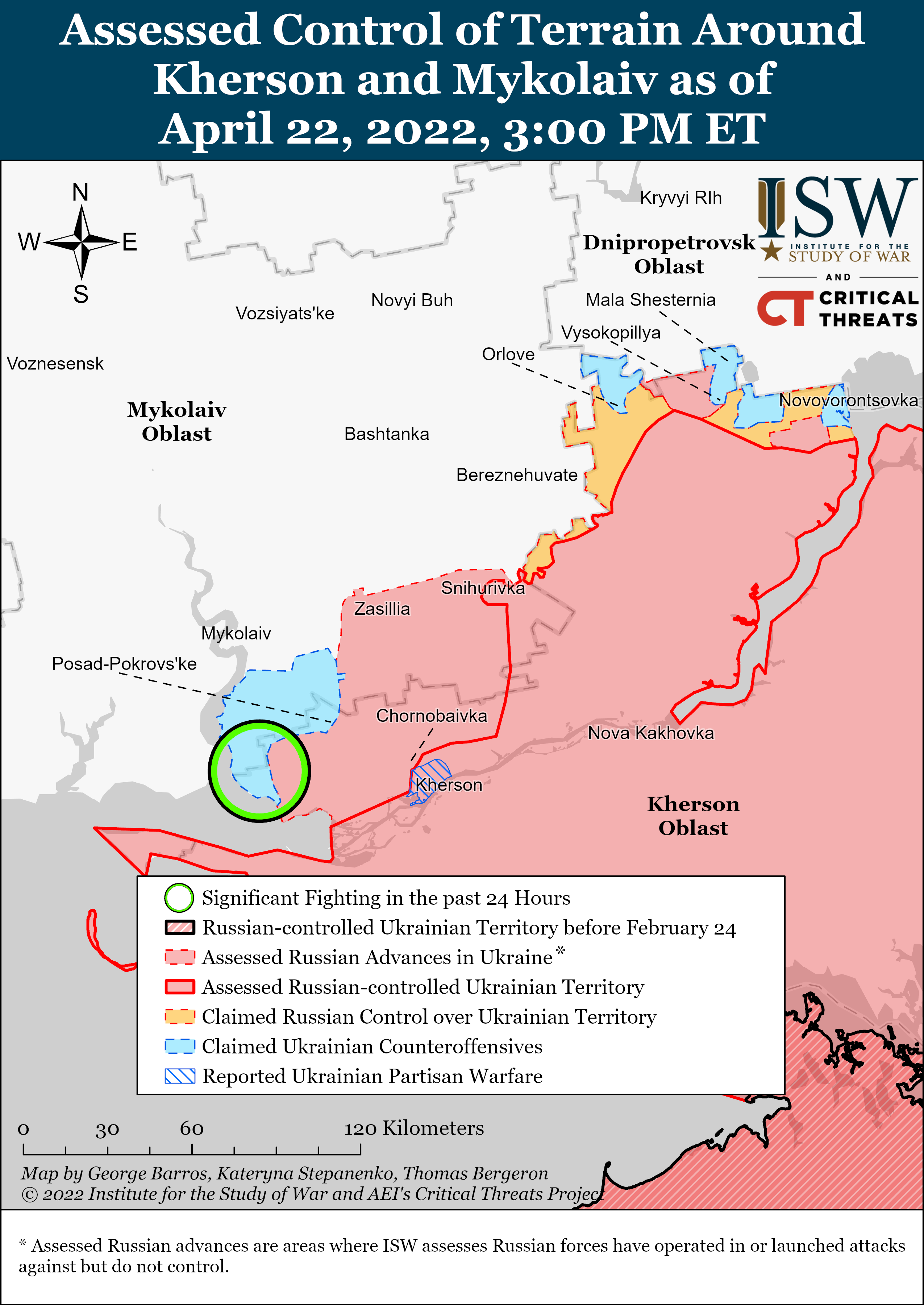