Russian offensive operations in eastern Ukraine made minor advances on April 28. Russian forces attacking southwest from Izyum likely seek to bypass Ukrainian defenses on the direct road to Slovyansk. Russian forces continued shelling and minor attacks along the line of contact in eastern Ukraine but did not secure any gains in the past 24 hours. Additional Russian reinforcements continue to deploy to Belgorod to support the Izyum advance. Ukrainian defenders in Mariupol’s Azovstal Steel Plant continue to hold out against heavy Russian artillery and aerial bombardment, including the likely use of multi-ton “bunker-buster” bombs against a Ukrainian field hospital.

Ukrainian news outlet Defense Express reported on April 27 that Russian Chief of the General Staff Valery Gerasimov will take personal command of the Russian offensive in the Izyum direction.[1] Citing unspecified Ukrainian military sources, Defense Express stated that Gerasimov is already in-theater and will command the offensive “at the operational and tactical level” and claimed the Russian military failed to create a single command structure under Southern Military District Commander Alexander Dvornikov. ISW cannot independently confirm this report. However, ISW previously assessed that Dvornikov’s appointment as overall commander in Ukraine would not solve Russia’s command and control challenges and likely strain his span of control.[2] If confirmed, the appointment of Russia’s senior general officer to command tactical operations indicates both the importance of the Izyum drive to Russia’s war in Ukraine and the breakdown in the Russian military’s normal chain of command. 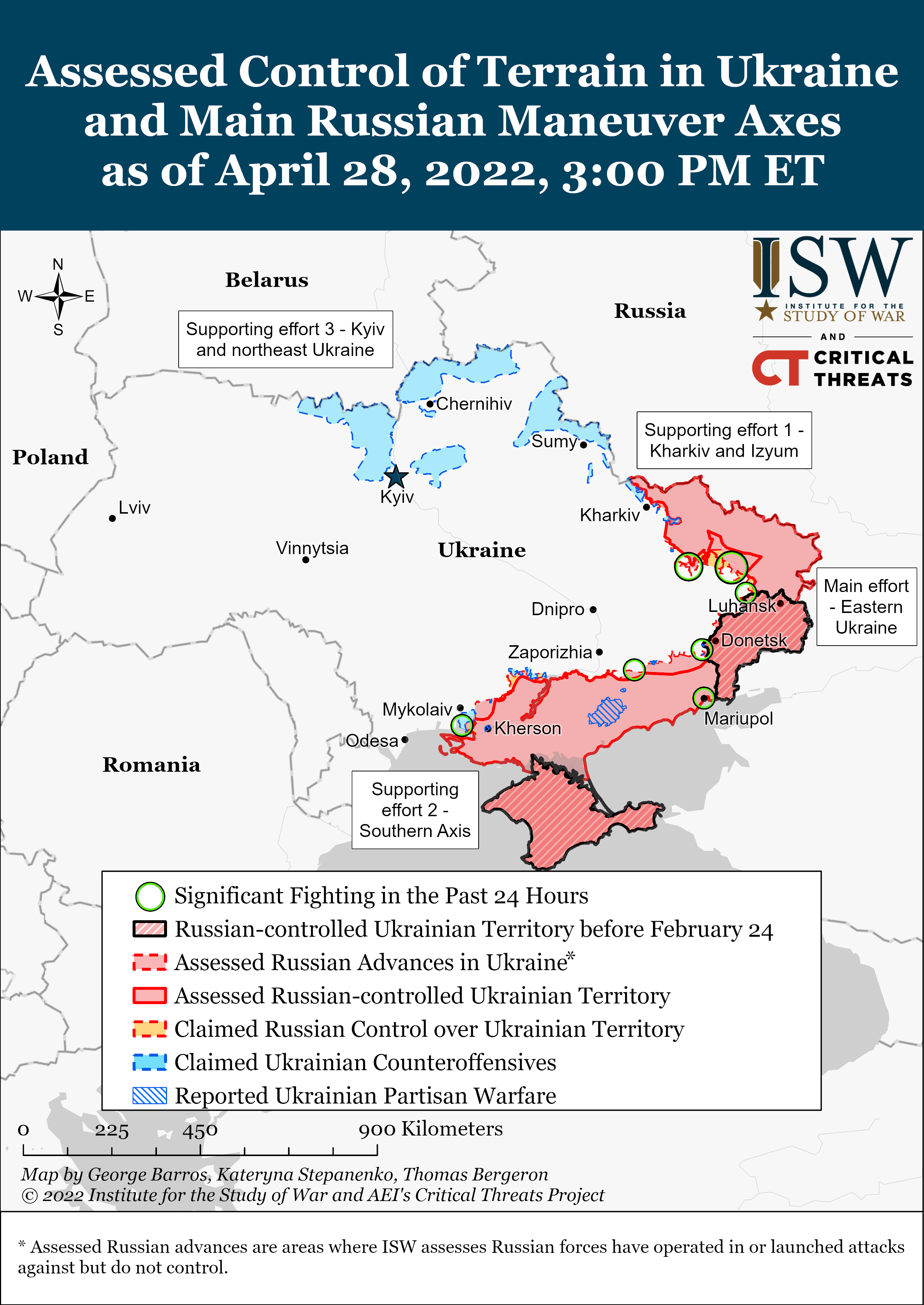 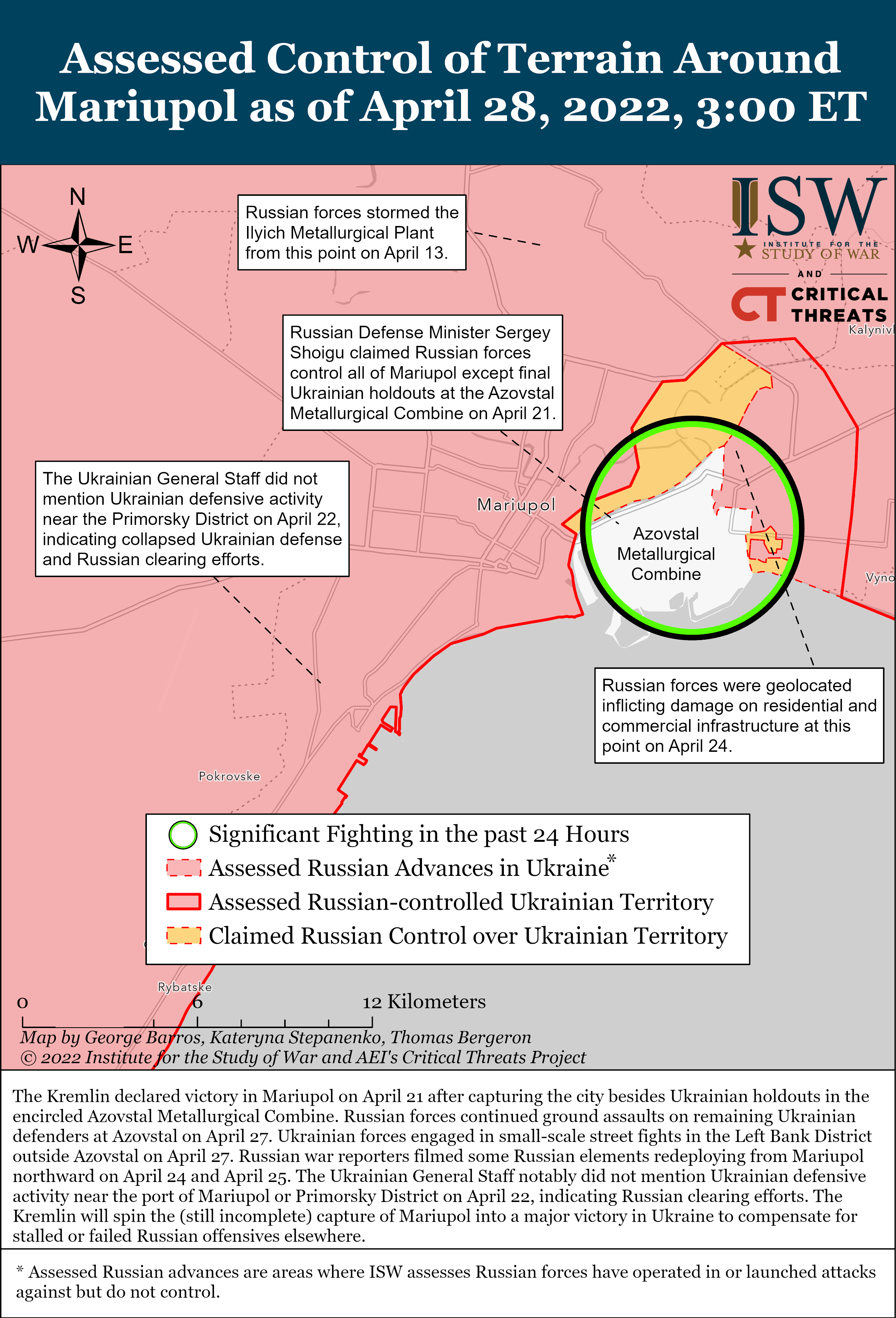 Russian forces continued tactical ground attacks and shelling along the entire line of contact in eastern Ukraine on April 28 but did not secure any major advances.[8] The concentrated use of artillery by Russian forces in eastern Ukraine in April is one of the few major changes Russia has made to its operations compared to the early weeks of the war. Russian forces conducted a (failed) attack on Rubizhne on April 28 but largely shelled Ukrainian positions in the Severodonetsk region without conducting ground attacks.[9] The Ukrainian General Staff reported that Russian forces concentrated on improving their tactical positions and preparing for offensive operations towards Lyman, 55 km west of Rubizhne.[10] Russian forces conducted several assaults west of Donetsk, attempting to advance on Solodke, Novomykhailivka, and Marinka; and Russian forces attempted to advance north of Mariupol in the area of Neskuchne and Vremivka.[11] ISW cannot confirm any territorial changes in these areas, however.

DNR Head Denis Pushilin stated on April 28 that the DNR will postpone local Victory Day celebrations planned for May 9 until “the complete victory and the expansion of the ‘DNR’ to the constitutional borders,” meaning the entirety of Donetsk Oblast.[12] Russian and proxy forces will likely continue steady offensive operations throughout May and possibly longer, though the Kremlin remains likely to attempt to claim some sort of victory on May 9. 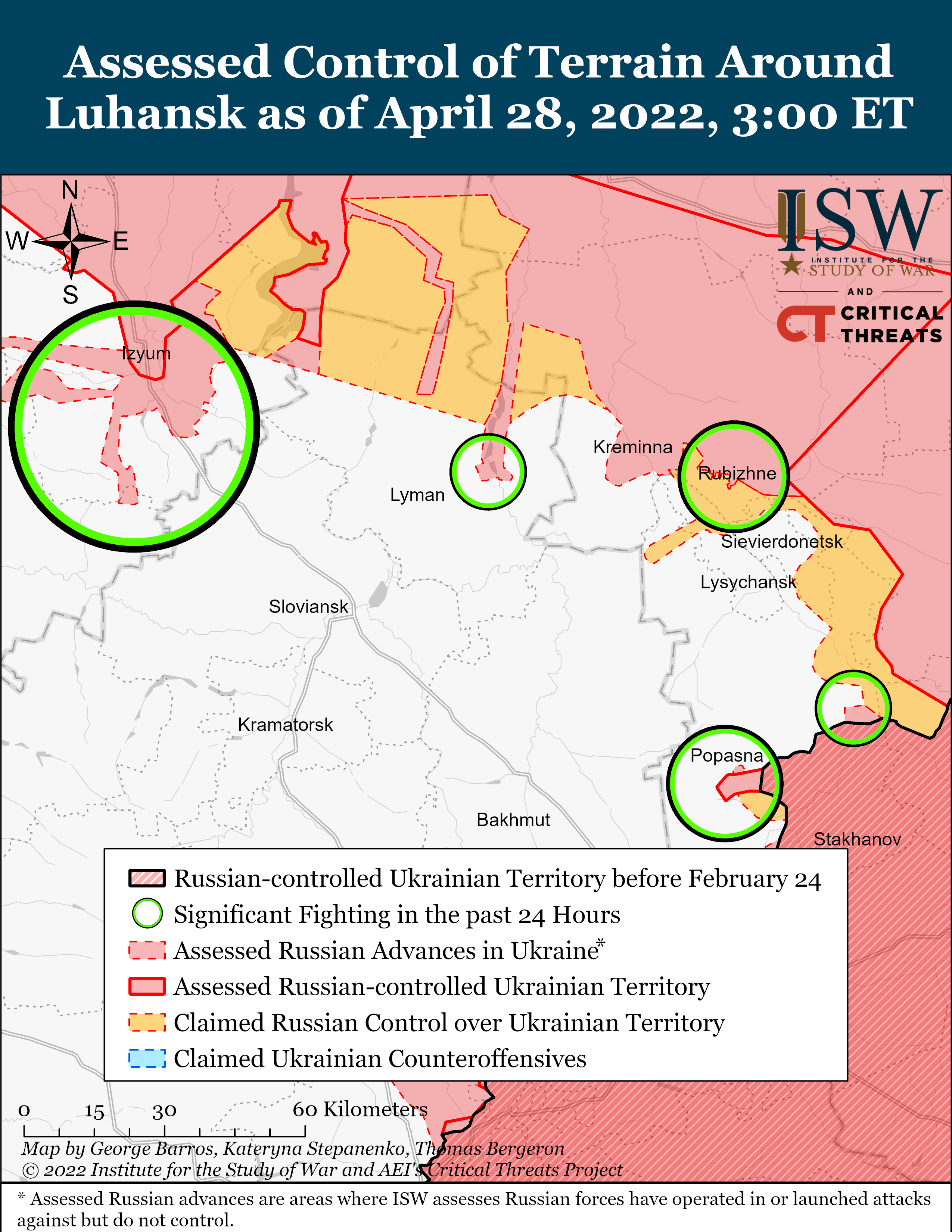 Ukrainian forces repelled continued Russian assaults west of Izyum toward Velyka Komushevkha and southwest on the road to Barvinkove. Russian forces launched assaults on Velyka Komushevkha (likely seeking to capture the south before pivoting south) and Nova Dmytrivka (on the direct road to Barvinkove).[13] Russian forces have made little progress in attacks directly southeast toward Slovyansk and will likely seek to bypass Ukrainian defenses by attacking further west. Ukrainian forces conducted a limited counterattack directly northwest of Kharkiv city on April 28, recapturing the town of Kutuzivka.[14]

Russian reinforcements and tactical missile systems continued to regroup in Belgorod on April 28. The Ukrainian General Staff reported that up to five Iskander-M ballistic missile formations are active in Belgorod Oblast, damaged Russian airborne units on the Izyum front are rotating back to Belgorod for refit, and elements of the 29th Combined Arms Army deployed to an unspecified location in Kharkiv Oblast.[15] 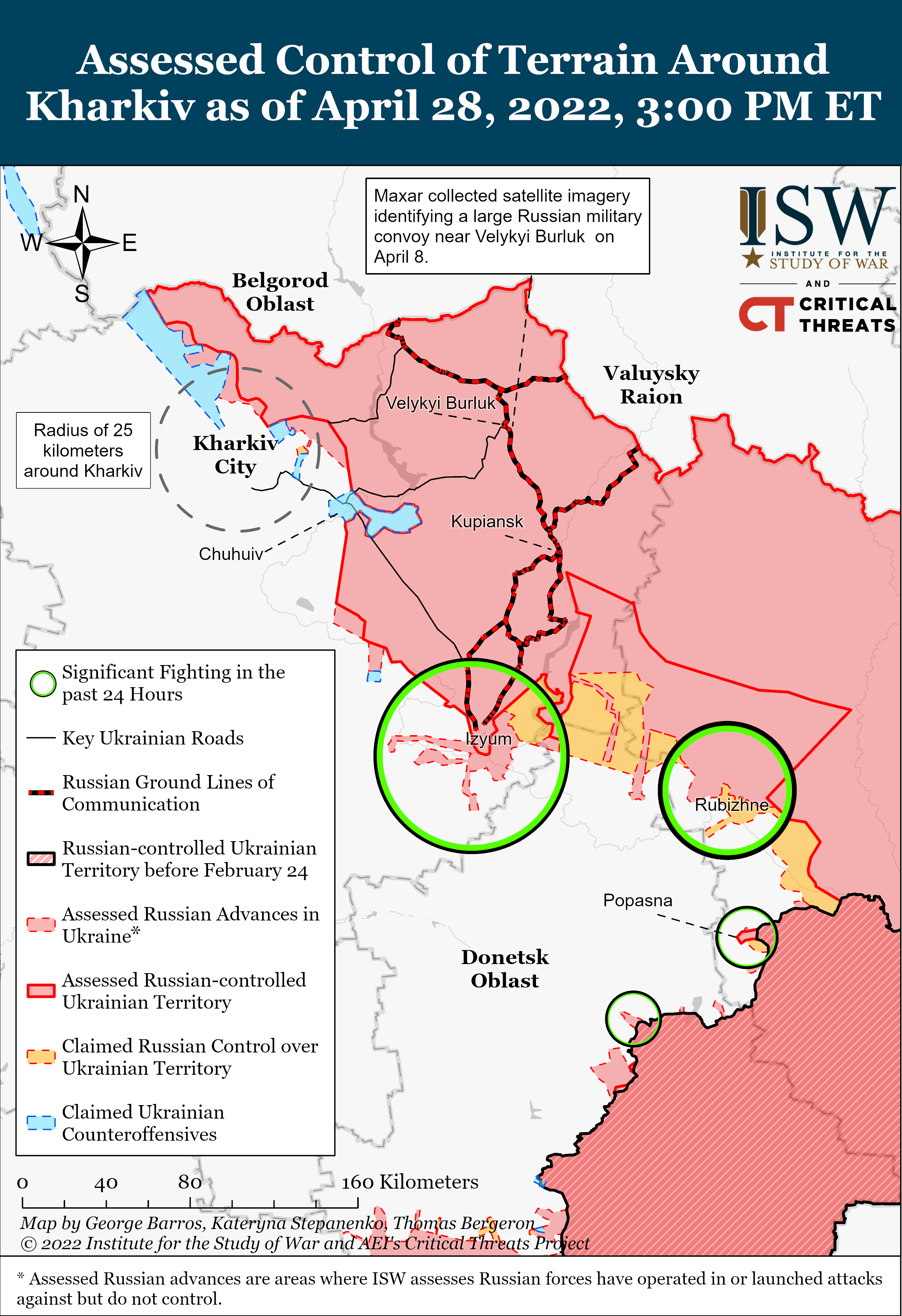 Russian forces conducted several locally successful attacks from Kherson toward Mykolaiv on April 28.[16] Russian forces captured the outskirts of Tavriyske and conducted assaults on the nearby settlements of Nova Zorya and Oleksandrivka, on the route to Mykolaiv.[17] Russian forces likely intend to capture the western border of Kherson Oblast and threaten Mykolaiv but are unlikely to be able to renew assaults on the city itself in the near future. Ukrainian forces repelled Russian attacks north towards Kryvyi Rih in the past 24 hours.[18]

Ukraine’s Operation Command “South” reported on April 28 that Russian forces are continuing to prepare to create a Kherson People’s Republic and intimidate the local population, though the Deputy Chairman of Russia’s local collaborationist government claimed there are no plans to hold a referendum in Kherson on April 28.[19] Russian authorities do likely intend to create some form of proxy republic in Kherson but may seek to mitigate protests and resistance from residents. 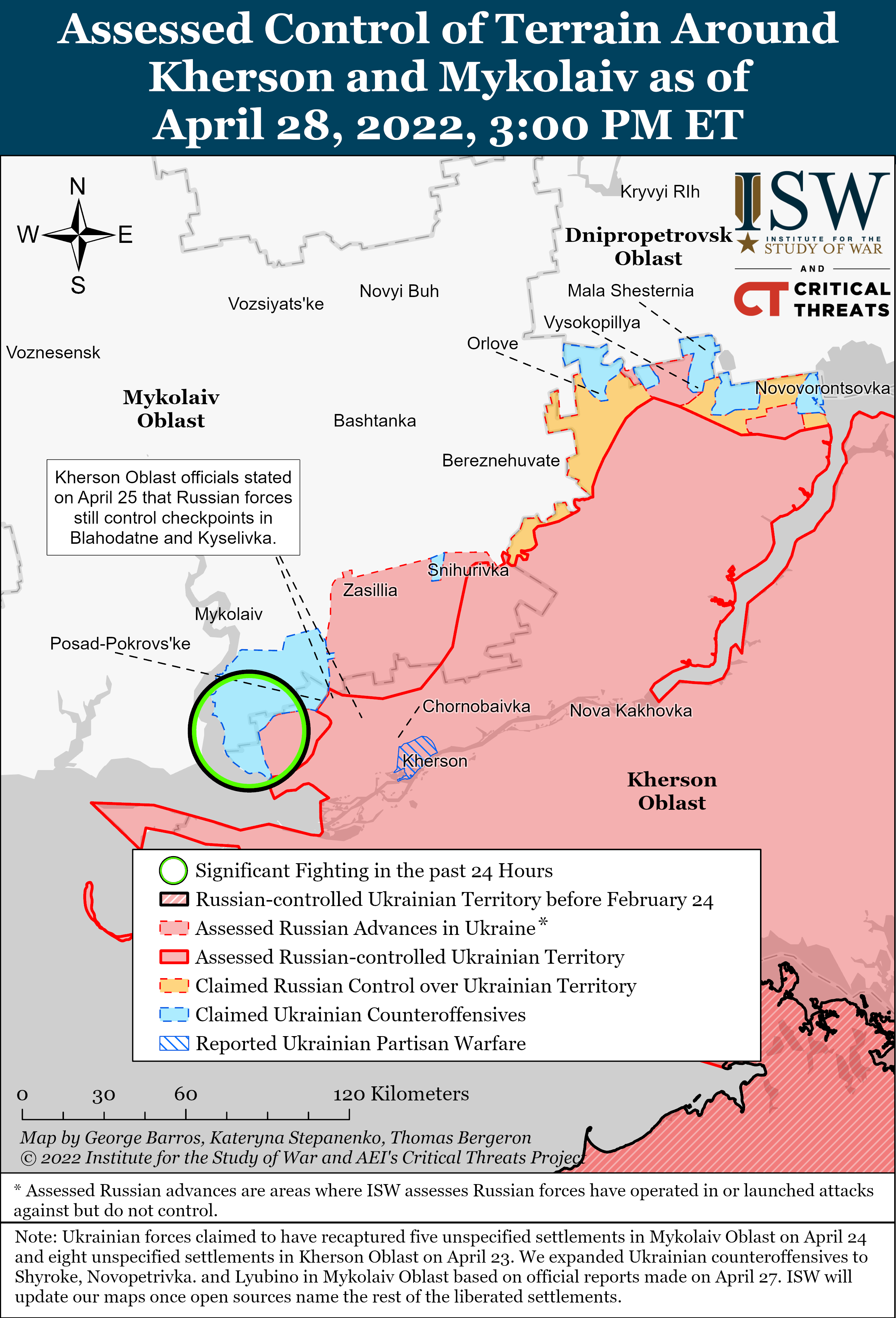 Russian and proxy forces continued to mobilize in Transnistria. The Ukrainian Military Intelligence Directorate (GUR) reported that Transnistria is preparing to fully staff its military units and increase their readiness.[20] Ukraine’s Operational Command “South” reported on April 27-28 that Russia is “systematically” conducting provocations in Transnistria and creating the false threat of an attack from Ukraine.[21] Transnistrian President Vadim Krasnoselsky ordered Transnistria’s Ministry of Internal Affairs to “be ready for any scenario” on April 28, but (likely falsely) denied Moldovan government reports that Transnistrian authorities are preventing men of fighting age from leaving the region.[22] 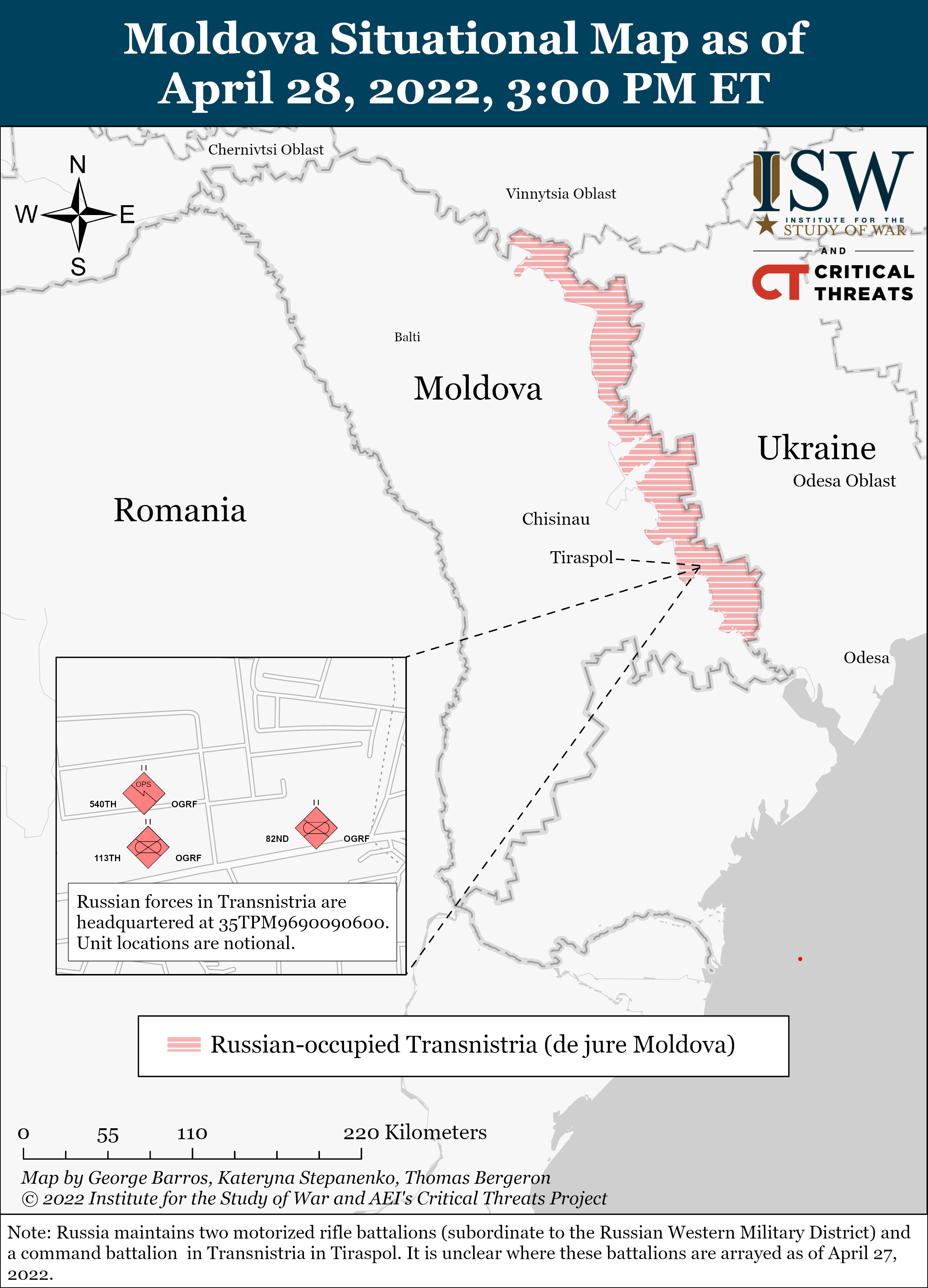 Ukraine’s Border Guard Service reported Russian forces fired at border checkpoints in Chernihiv and Sumy Oblasts on April 27-28 but did not inflict any casualties.[23] The Ukrainian General Staff continued to report that Russian forces are highly unlikely to attempt a new offensive in northeastern Ukraine but are reinforcing the Russian border and are trying to fix Ukrainian reserves in place to prevent their redeployment to eastern Ukraine.[24]