Western and Ukrainian outlets circulated a report, likely false, of a Russian general allegedly threatening to destroy Europe’s largest nuclear facility, the Russian-occupied Zaporizhzhia Nuclear Power Plant (NPP), if Russia could not hold the plant. Multiple news outlets shared a screenshot from the Russian social networking site Vkontakte that claimed to cite the Russian head of the Zaporizhia occupation garrison, Major General Valery Vasilev, stating that Russia had mined the Zaporizhzhia NPP and that the plant would be “either Russian land or a scorched desert.”[1] The screenshot appeared to be a news report posted in a Vkontakte group run by Russian outlet Lenta Novosti Zaporizhia. The outlet itself claimed that the screenshot was from a faked group and denied writing the report.[2] The Russian Ministry of Defense condemned the report and screenshot as a “fake” and claimed that Vasilev was in Uzbekistan at the time he was purported to have made the statement to forces at Zaporizhzhia.[3] Regardless of the origin (or existence) of the original post, the reporting is unreliable. It is indirect and does not claim to cite an official statement or a statement made on any official Russian news or government website.

This likely misreporting distracts from the very real risks of Russia’s militarization of the Zaporizhzhia NPP, which may include mining the plant and almost certainly includes the unsafe storage of military armaments near nuclear reactors and nuclear waste storage facilities.[4] Bellingcat geolocated a drone video of the Zaporizhia NPP that was shared by Russian opposition outlet The Insider on August 5. The video depicts Russian military vehicles moving in and around the plant, including military trucks and armored vehicles moving around and into the building containing the first of the plant’s six nuclear reactors.[5] Russian forces have also dug trenches in and around the plant and may have established firing positions.[6] Russian officials claim that Ukraine has repeatedly attacked the plant, while Ukrainian officials claim that Russian forces are attacking Ukrainian positions from within the plant, preventing Ukrainian return fire and essentially using the plant as a nuclear shield.[7] Russian forces have repeatedly shelled the nearby Ukrainian-controlled town of Nikopol, likely from positions in or around the NPP, since July.[8]

ISW continues to assess that Russian forces are likely leveraging the threat of nuclear disaster to degrade Western will to provide military support to a Ukrainian counteroffensive.[9] 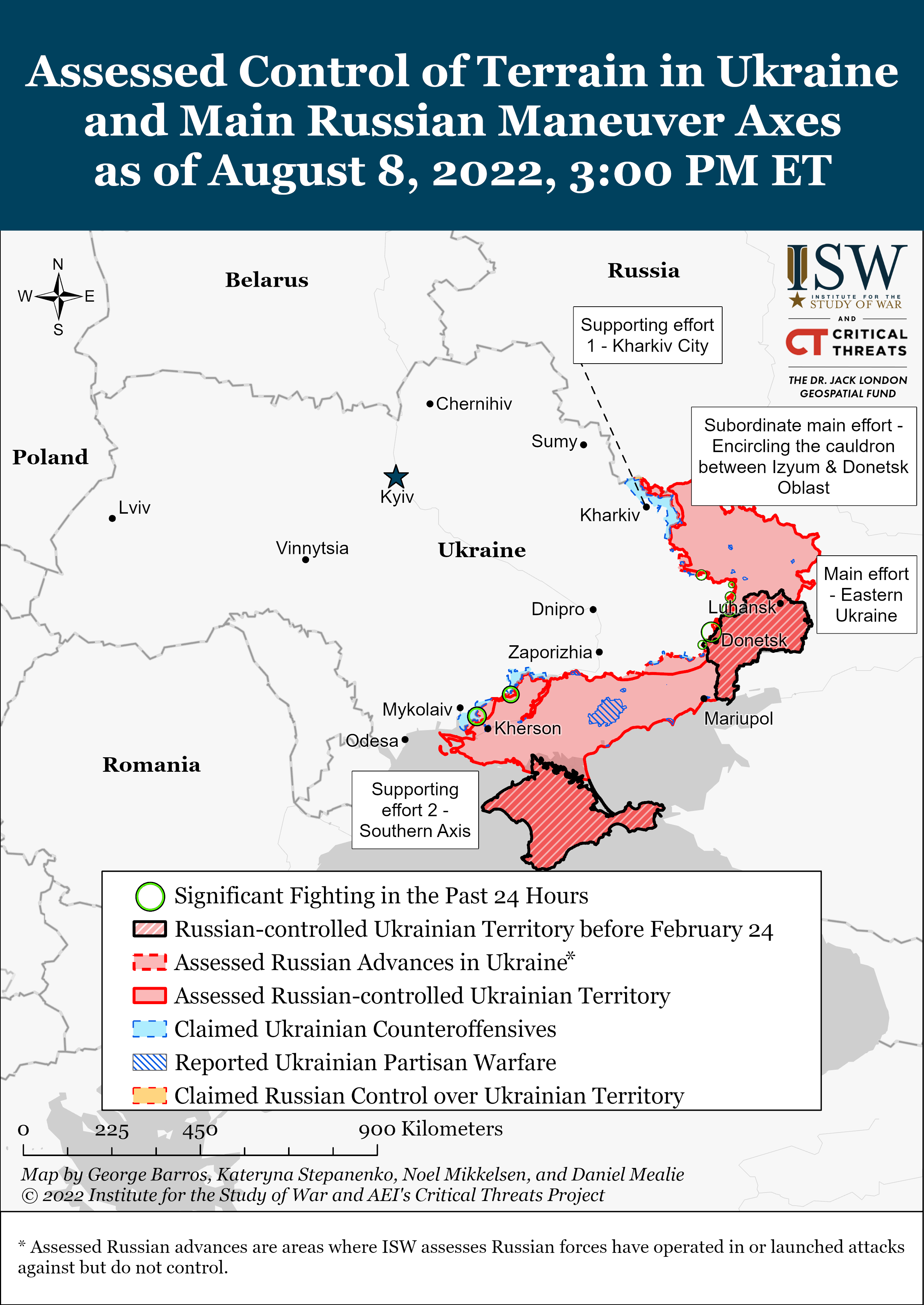 Russian forces conducted a limited ground attack northwest of Slovyansk on August 8. The Ukrainian General staff reported that Russian forces conducted a failed offensive to improve their positions near Bohorodychne.[11] Russian forces continued to shell settlements between Izyum and Slovyansk along the Kharkiv-Donetsk Oblast border and additionally conducted an artillery strike directly on Slovyansk.[12] Russian journalist and milblogger Evgeniy Poddubniy claimed on August 7 that Ukrainian forces are continually forming new brigades in Kharkiv Oblast despite continuous Russian strikes and projected that this force generation shows that Ukrainian forces can simultaneously conduct advances in the Kherson direction and in Kharkiv Oblast.[13] 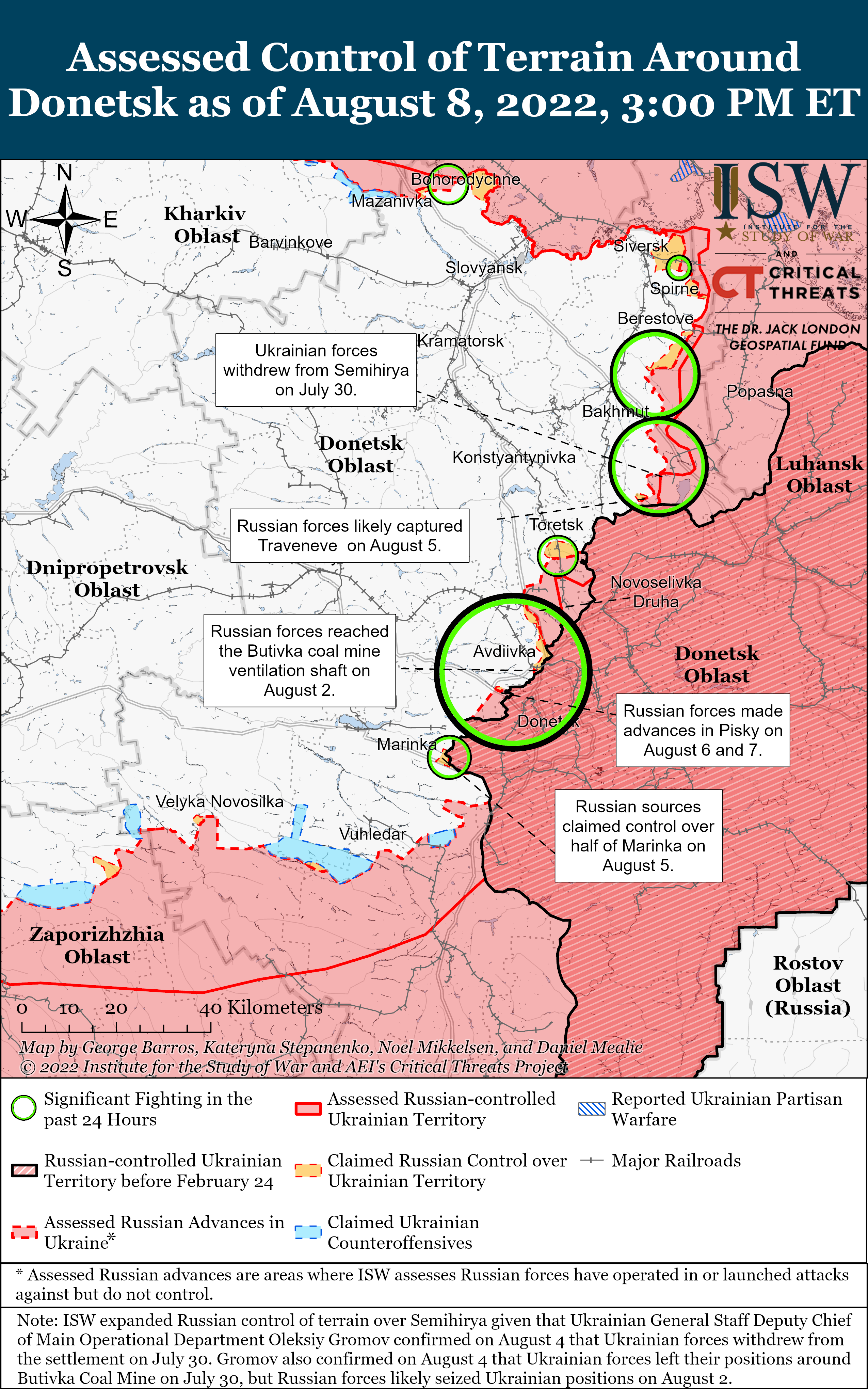 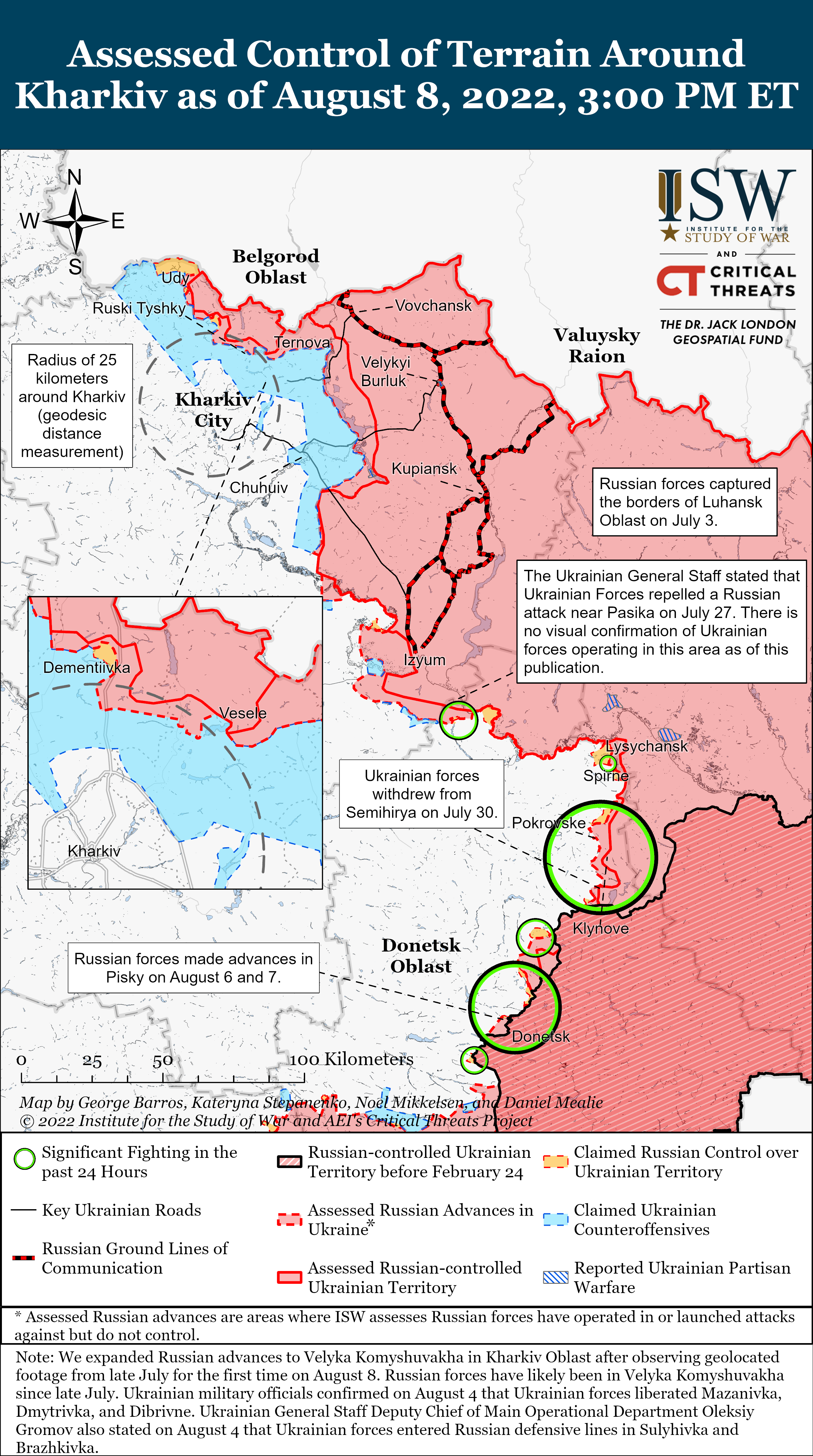 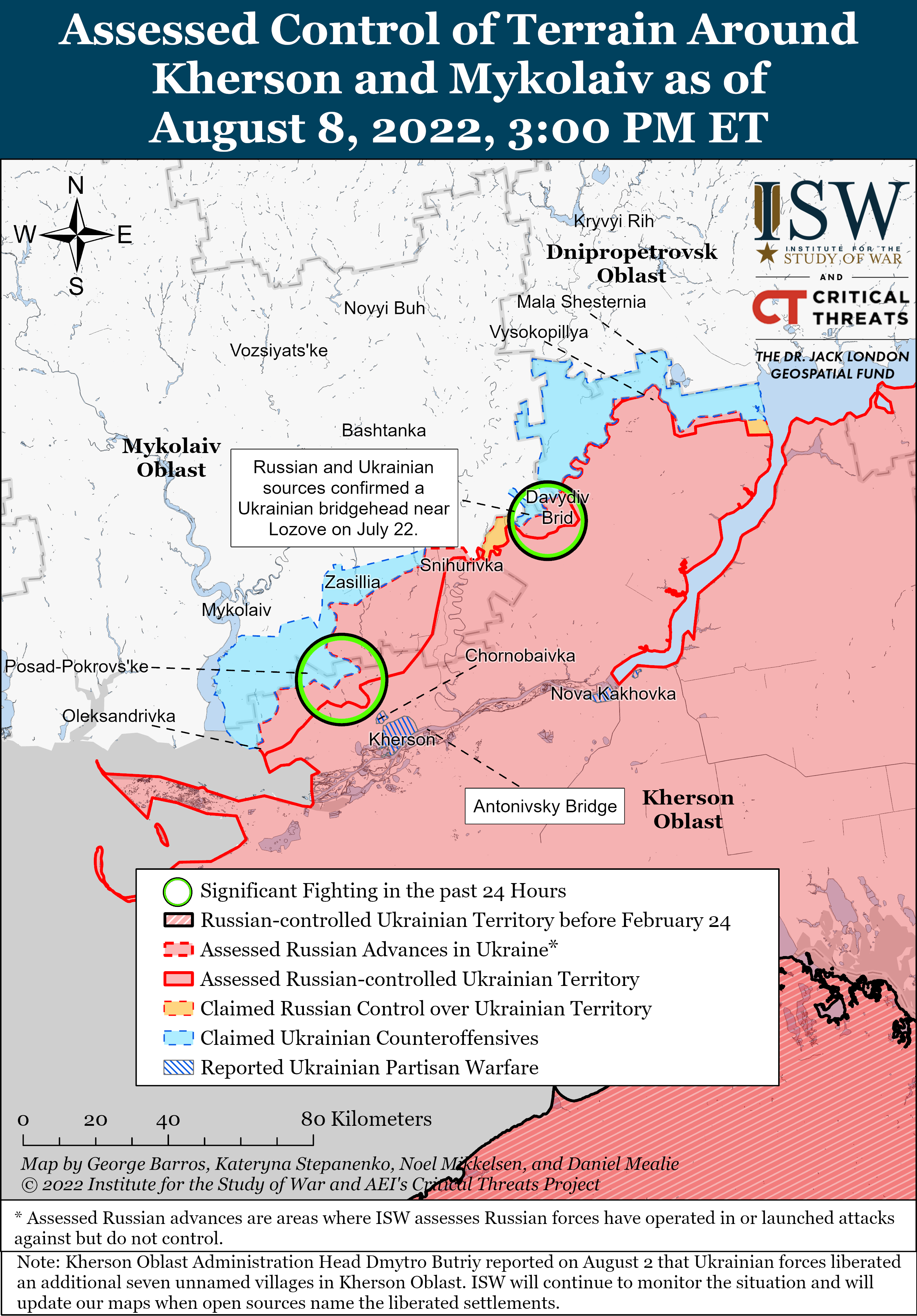 Chechen Republic Head Ramzan Kadyrov stated that a Russian Special Forces volunteer group completed a two-week accelerated tactical and fire training course at the Russian Special Forces University in Gudermes, Chechnya.[36] Kadyrov stated that a flight of volunteers departed the Grozny airport for deployment to an unspecified area in Ukraine on August 8.[37]

Ukraine’s Main Military Intelligence Directorate (GUR) reported on August 8 that Russian forces are deploying less-professional occupation forces and increasing pressure on local populations. The GUR reported that Russian occupation forces are increasing pressure on civilians at checkpoints in Kherson Oblast, particularly in Hola Prystan. The GUR reported that Russian forces deployed a newly mobilized battalion of Russian convicted criminals (likely pardoned for their service) to Balaklia, Kharkiv Oblast, and that cruelty, “immoral behavior,” and aggressive attitudes toward the local population “increased sharply” upon their arrival.[38] This report demonstrates one effect of Russia’s wide-ranging attempt to mobilize as many Russians as possible, regardless of fitness for service. The GUR also reported that racialized conflicts between Russian occupation units of different ethnicities are increasing, affecting the safety of civilians in occupied areas. The GUR claimed that Russian forces shot and killed the Chechen deputy commander of a unit in Zaporizhia for ethnically motivated reasons. The GUR also reported that an intoxicated Russian soldier driving an armored personnel carrier (APC) knocked down an electrical pole in Zelenopillya, Luhansk Oblast, cutting off electricity to the town.

Newly mobilized Russian battalions are likely worse trained, less professional, and more brutal to occupied populations than professional Russian soldiers or even conscripts who completed formal military training prior to their deployments. Russian forces may increasingly deploy low-quality, poorly trained units, like those made up of convicts, to control populations in occupied parts of Ukraine. Such deployments may reduce the competence of occupation authorities and counter-partisan operations and may increase Ukrainian support for movements that resist Russia’s occupation.

Russian occupation officials are beginning to issue formal orders to prepare for sham annexation referenda. The head of the Russian Zaporizhia Oblast Occupation Administration, Yevheny Balitsky, said on August 8 that he ordered the oblast’s central election commission “to start working on the issue of organizing a referendum on the reunification of Zaporizhia Oblast with the Russian Federation.”[39] Balitsky claimed that he signed the order after 700 delegates voted “unanimously” at the “We Are Together with Russia” event held in Zaporizhia Oblast on August 8. ISW has previously assessed that the Kremlin likely founded, coordinates, and promotes the “We Are Together with Russia” organization to create a facade of public support for the annexation and integration of occupied Ukrainian oblasts into Russia.[40] Other Russian occupation officials amplified Balitsky’s referendum preparation and congratulated him for ”following the path of Crimea.”[41] The Russian deputy head of the Kherson Occupation Administration, Kirill Stremousov, posted video footage on Telegram that he claimed showed residents of Kherson Oblast claiming that they are ready to vote in a referendum to join Russia.[42] Stremousov claimed that Kherson "has already been liberated from slavery and the colonial regime of the collective West.” Kremlin Press Secretary Dmitry Peskov announced on August 8 that residents of Kherson and Zaporizhia want to hold referendums to join Russia and claimed that “It's not us [the Kremlin] who are holding the referendum.”[43]

Russian occupation officials are also attempting to incentivize Ukrainian cooperation with Russian data collection efforts that occupation officials will likely use to falsify the results of the sham annexation referenda but are facing resistance. The Ukrainian Resistance Center reported on August 8 that Russian occupation forces in Kherson are expanding the number of “one-time financial assistance” locations at which civilians in occupied areas can receive 10,000 rubles (approximately 165 USD) in exchange for their passport data.[44] The Resistance Center reported that this approach has not generated as much data collection as occupation officials had planned, leading them to expand the number of locations throughout occupied Kherson Oblast.[45] Ukrainian partisan Telegram channel Yellow Ribbon called on Kherson Oblast residents to mobilize and prevent Russians from holding an annexation referendum on August 8 and asked civilians in occupied areas to provide information on Russian planning, collaborators, and troop movements.[46] Yellow Ribbon also shared images of partisan supporters posting partisan posters and slogans in Kherson, Nova Kakhovka, Melitopol, and Crimea on August 8 and called on Ukrainians to resist Russian “passportization” efforts.[47]