Ukrainian officials have indicated that Ukrainian forces plan to continue offensive operations over the coming winter to capitalize on recent battlefield successes and prevent Russian forces from regaining the battlefield initiative. Spokesperson of the Ukrainian Armed Forces Eastern Group Serhii Cherevatyi stated on December 4 that frozen ground enables heavy wheeled and tracked vehicles to advance and that Ukrainian forces are preparing such vehicles for winter operations.[1] Cherevatyi also stated that low-quality mobilized recruits and Wagner Group personnel recruited from Russian prisoners are unprepared for combat in the winter.[2] The Ukrainian Ministry of Defense (MoD) stated on November 20 that those who suggest the winter will pause hostilities “likely never sunbathed in January on the southern coast of Crimea,” suggesting that Ukrainian forces intend to continue counteroffensive operations over the coming winter that contribute toward the goal of retaking Crimea.[3] Ukrainian Deputy Defense Minister Volodymyr Havrylov stated on November 18 that Ukrainian forces will continue to fight in the winter because any type of pause will allow Russian forces to reinforce their units and positions.[4] Ukrainian officials’ prior statements on ongoing Ukrainian counteroffensive actions in Kherson Oblast are further evidence that these official statements on winter counteroffensive actions are indicators of continuing counteroffensive operations.[5]

Senior US government officials are mistakenly identifying the optimal window of opportunity for Ukraine to conduct more counteroffensives as the spring rather than winter, despite Ukrainian officials’ statements to the contrary. US Director for National Intelligence (DNI) Avril Haines assessed on December 3 that the pace of the war in Ukraine will slow over the winter so both sides can refit, resupply, and reconstitute, despite evidence that conditions on the ground favor a renewed offensive and despite the demonstrated tendency of Ukrainian forces to initiate new counteroffensive efforts relatively quickly after the previous effort has culminated.[6]

Weather conditions in winter 2023 likely will dictate a timeframe in which Ukraine can conduct maneuver warfare and continue its string of operational successes with minimal pauses that would increase the risks of Ukraine losing the initiative. The fall mud season in November hampered maneuver warfare, as ISW previously noted.[10] Both Russia and Ukraine nevertheless continued aggressive offensive and counter-offensive operations throughout this muddy period despite some Western predictions that the mud would suspend operations. As the hard freeze approaches in late December, Ukrainian forces will be again able to exploit the weather conditions. Winter is usually the best season for mechanized warfare in Ukraine whereas spring is the nightmare season for fighting in Ukraine.[11] The thaw swells rivers and streams and turns fields into seas of mud.[12] Ukrainian forces likely are preparing to take advantage of frozen terrain to move more easily than they could in the muddy autumn months.[13]

If Ukraine’s allies and partners do not support Ukrainian forces to conduct large-scale decisive counteroffensive operations this winter—as the DNI’s statements might be construed to suggest – then Ukrainians‘ ability to conduct maneuver warfare will be constrained until likely at least after the spring mud season in March 2023.[14] Such a course of action will likely prematurely culminate Ukraine‘s current momentum and grant shattered Russian forces a valuable three-to-four-month reprieve to reconstitute and prepare to fight on a better footing. 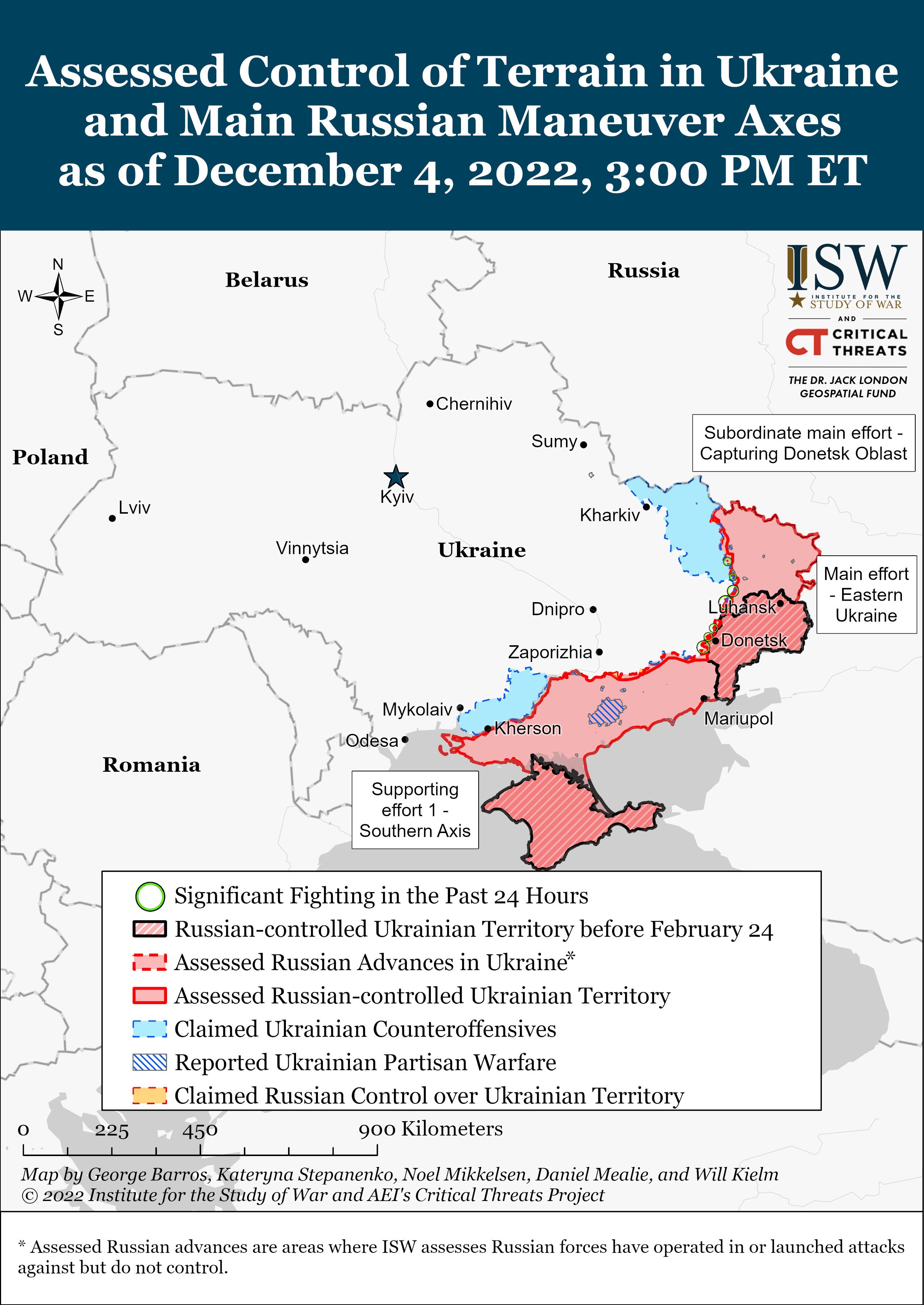 Russian sources reported that Ukrainian forces continued counteroffensive operations in the direction of Svatove on December 4. The Russian Ministry of Defense (MoD) claimed that Russian forces thwarted Ukrainian assaults within 28km northwest of Svatove near Kuzemivka in Luhansk Oblast and Yahidne in Kharkiv Oblast.[15] Geolocated footage posted on December 4 shows Ukrainian forces conducting strikes on Russian positions northwest of Svatove near  Stelmakhivka and Kryvoshyivka in Luhansk Oblast.[16] A Russian milblogger claimed that Ukrainian forces will likely increase their assaults on Kuzemivka as well as on the R-66 highway between Svatove and Kreminna.[17] ISW makes no assessments about specific, future Ukrainian operations. 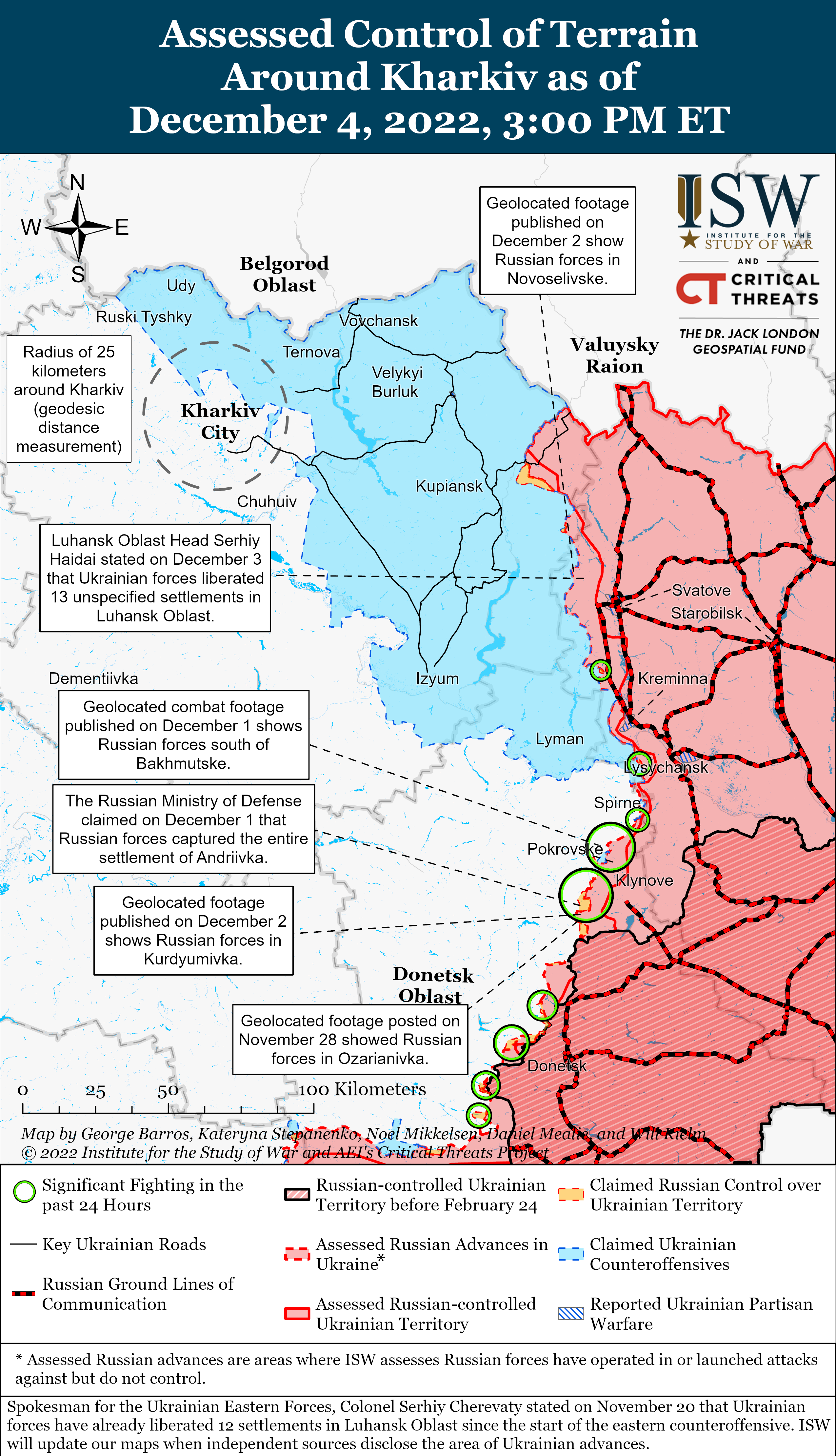 Russian forces are likely continuing to suffer high casualties in operations around Bakhmut. Spokesperson for the Ukrainian Eastern Group of Forces Serhii Cherevatyi stated that Russian troops are suffering losses on the order of 50 wounded and 50 killed in action per day around Bakhmut.[29] Cherevatyi also noted that Russian troops received an order not to bring artillery shells within 100km of the frontline in the Donetsk area because of recent successful Ukrainian strikes on Russian ammunition depots.[30] The Ukrainian Border Guard additionally reported that Ukrainian troops shot down a Russian Sukhoi-34 fighter-bomber on the outskirts of Bakhmut on December 3.[31] Russian operations around Bakhmut are continuing to expend manpower, ammunition, and other military assets while making limited tactical gains that have limited operational utility, as ISW has previously assessed.[32]

Russian forces continued defensive operations in western Donetsk and eastern Zaporizhia oblasts on December 4. The Russian Ministry of Defense claimed that Russian troops repelled a series of limited Ukrainian counterattacks to regain lost positions southwest of Donetsk City in the Vuhledar area.[37] Russian troops continued routine shelling along the line of contact in this area.[38] 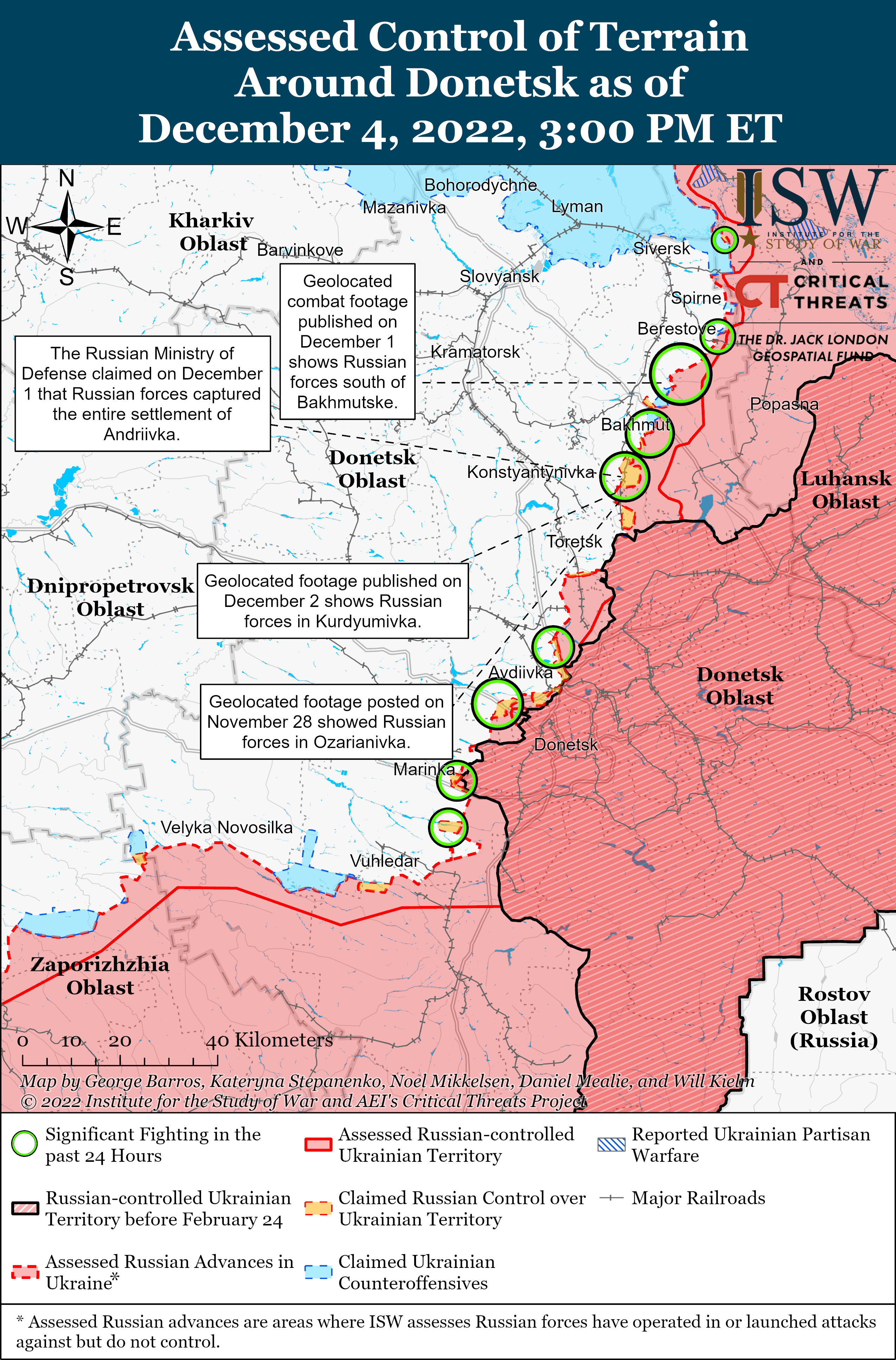 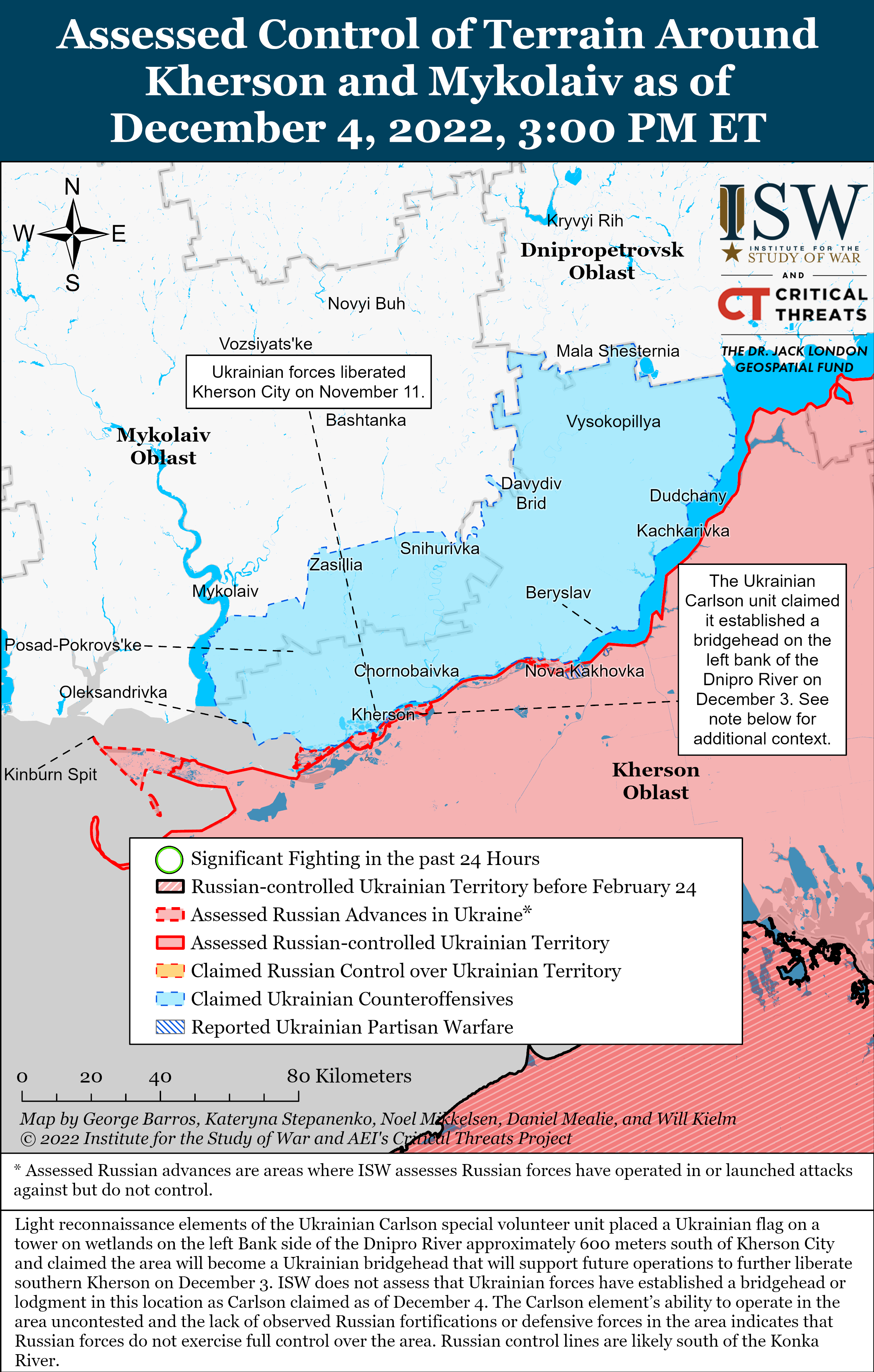 Russian mobilized soldiers reportedly continue to challenge the Russian Ministry of Defense’s (MoD’s) control over its forces via insubordination and defiance. A Russian Telegram channel claimed on December 2 that mobilized soldiers stationed in Kazan, Republic of Tatarstan “rebelled” when their commanders prevented them from taking leave or from visiting their relatives.[50] Video posted to Telegram shows a large group of mobilized soldiers pushing through a gate and exiting the perimeter of the unit before confronting other soldiers who attempted to stop them.[51] A local Russian news agency called the video a fake on December 3.[52] The source claimed the mobilized soldiers were in such a hurry to see their relatives that they forgot to check out at the exit. The soldiers allegedly returned once officials reminded them to check out.[53] The original poster of the video of “rebelling” mobilized soldiers reportedly took down the video following the local agency’s denunciation.[54] ISW reported on three other instances of mobilized soldiers in Kazan rioting, disobeying orders, and demonstrating disruptive behavior in the month of November alone.[55] An independent Russian news outlet reported that Russian authorities arrested a Kazan journalist for participation in rallies against mobilization on December 2.[56]

Relatives of Russian mobilized soldiers continue to form support groups across Russia to engage with authorities concerning mobilization and to gather aid for Russian soldiers. The relatives’ groups reportedly have had limited success scheduling meetings with local governments.[57] However, the groups likely must carefully restrain their efforts to avoid the appearance of criticizing state efforts. The Kremlin appears wary of allowing these groups to repeat scenarios seen when mothers’ groups challenged Soviet state decisions during the Soviet-Afghan War. The Kremlin has made efforts to host staged meetings with mothers of mobilized soldiers while quieting genuine complaints.[58] A Russian news source reported on December 2 that Russian authorities have ignored appeals from the Council of Mothers and Wives, an organization created immediately following the start of mobilization.[59] The source stated that Council of Mothers and Wives activist Olga Tsukanova announced that unspecified authorities surveil her and have opened a criminal case against her.[60] The Russian Ministry of Defense (MoD) and other Russian sources continue to depict Russian soldiers as content, well-cared for, and well-equipped, despite evidence of continuing poor conditions and equipment shortages.[61]

Russian authorities reportedly continue to fail to deliver promised payments to Russian soldiers.[62] A Russian news source reported that the Russian Ministry of Defense (MoD) has prepared a draft procedure for routing social payments to the mobilized through unit commanders.[63] Contract soldiers reportedly lose the right to receive payments under this framework.[64] Authorizing the delegation of payments through unit commanders also creates systemic opportunities for payment embezzlement.

Russian authorities continue to mobilize men without medical examinations or a completed period of training and with conditions that should qualify them for exemption from mobilization.[65] Many of these mobilizations contradict Russian law and Russian President Vladimir Putin’s informal declaration of the end of partial mobilization.

Russian occupation authorities continued efforts to forcibly integrate children in Russian-occupied territories into the Russian education system on December 4. The Ukrainian General Staff reported that Russian occupation authorities continued to threaten to strip parental rights from Ukrainian parents who refuse to send their children to study under Russian programs in occupied Kherson Oblast.[72]