The Kremlin is likely setting conditions for crypto-mobilization of the Russian economy in preparation for a protracted war in Ukraine. The Kremlin proposed an amendment to federal laws on Russian Armed Forces supply matters to the Russian State Duma on June 30, that would introduce “special measures in the economic sphere” obliging Russian businesses (regardless of ownership) to supply Russian special military and counterterrorist operations.[1] The amendment would prohibit Russian businesses from refusing to accept state orders for special military operations and allow the Kremlin to change employee contracts and work conditions, such as forcing workers to work during the night or federal holidays. The Kremlin noted in the amendment’s description that the ongoing special military operation in Ukraine exposed supply shortages, specifically materials needed to repair military equipment, and stated that Russian officials need to “concentrate their efforts in certain sectors of the economy." Russian President Vladimir Putin is likely mobilizing the Russian economy and industry to sustain the ongoing war effort, but has not yet taken parallel measures to mobilize Russian manpower on a large scale.

Russian authorities are likely taking measures to integrate the Zaporizhzhia Nuclear Power Plant (NPP) directly into the Russian energy system, contradicting previous Russian statements that the Zaporizhzhia NPP would sell electricity to Ukraine. Olga Kosharna, an independent expert on nuclear energy, stated on June 30 that Russia’s Rosatom (Russian state-owned nuclear energy corporation) employees have been taking measures at the Zaporizhzhia NPP to potentially divert its energy to the Russian energy grid.[2] Kosharna added that Russian forces have been working in Chonhard (southern Kherson Oblast) to repair the main energy transmission line that runs into Crimea, which Ukrainian forces had destroyed in 2015 following Russia’s seizure of the transmission line after the annexation of Crimea in 2014. Representatives of Ukraine’s Ukrenergo electricity transmission operator had stated as recently as late May that it would be physically impossible for Russia to divert Ukrainian electricity to Russia following the destruction of those transmission lines.[3] Russian forces are likely seeking to ensure physical access to transmission lines in order to support the direct flow of Ukrainian energy into Russia, which may explain some of the military activities observed in recent weeks in the Russian-occupied portions of Zaporizhia Oblast.

Russian authorities had indicated on May 18 that while the Zaporizhzhia NPP would work for Russia, it would continue to sell energy to Ukraine, as ISW reported.[4] However, it is becoming increasingly evident that Russian authorities are taking measures to integrate Ukrainian economic assets directly into the Russian economy. Reports that Russian forces may be preparing a false flag provocation at the Zaporizhzhia NPP could be part of this Russian effort--Moscow might use such a false flag attack to accuse Ukrainian authorities of mismanaging nuclear assets and justify taking full control of them and their output.[5] 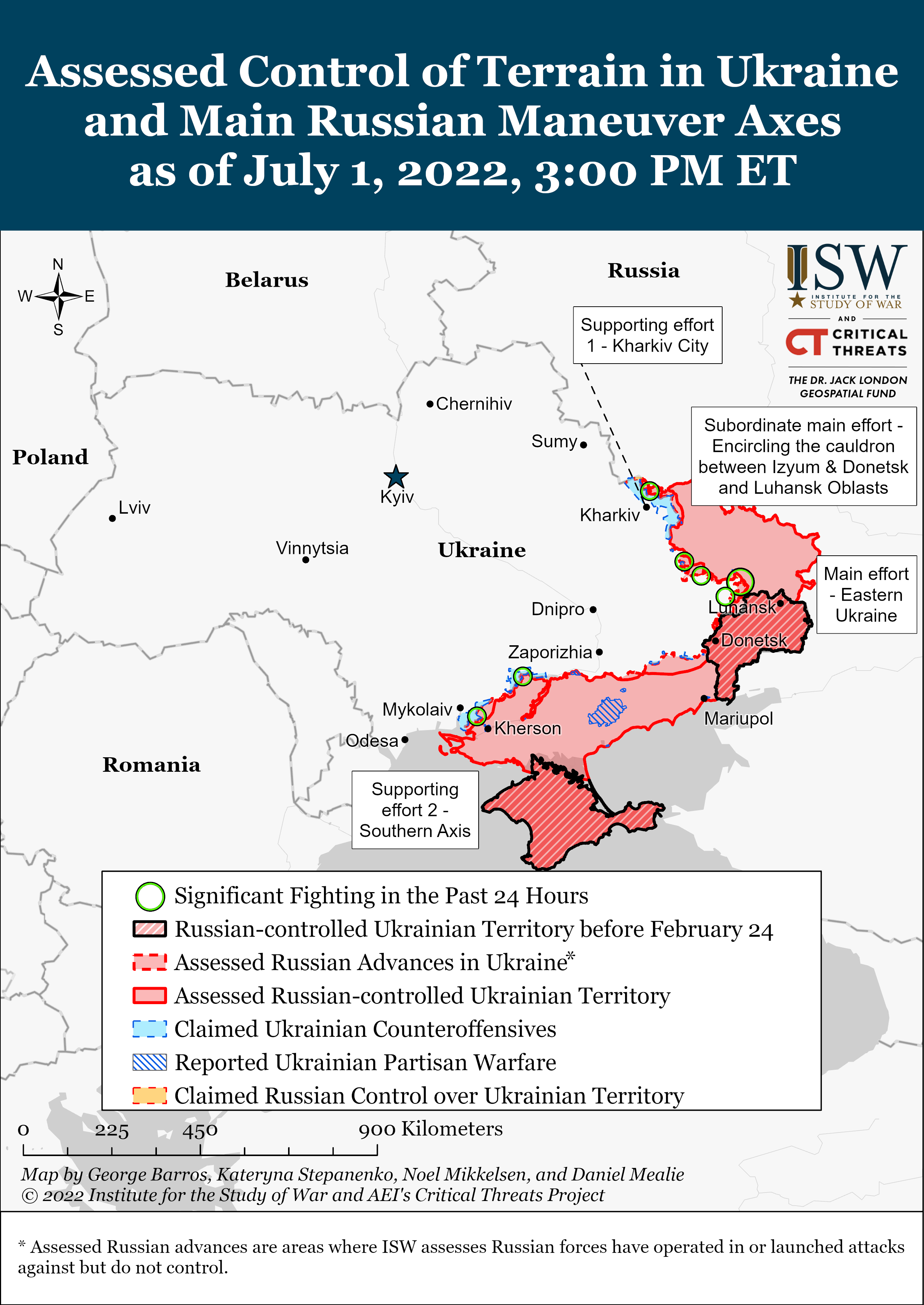 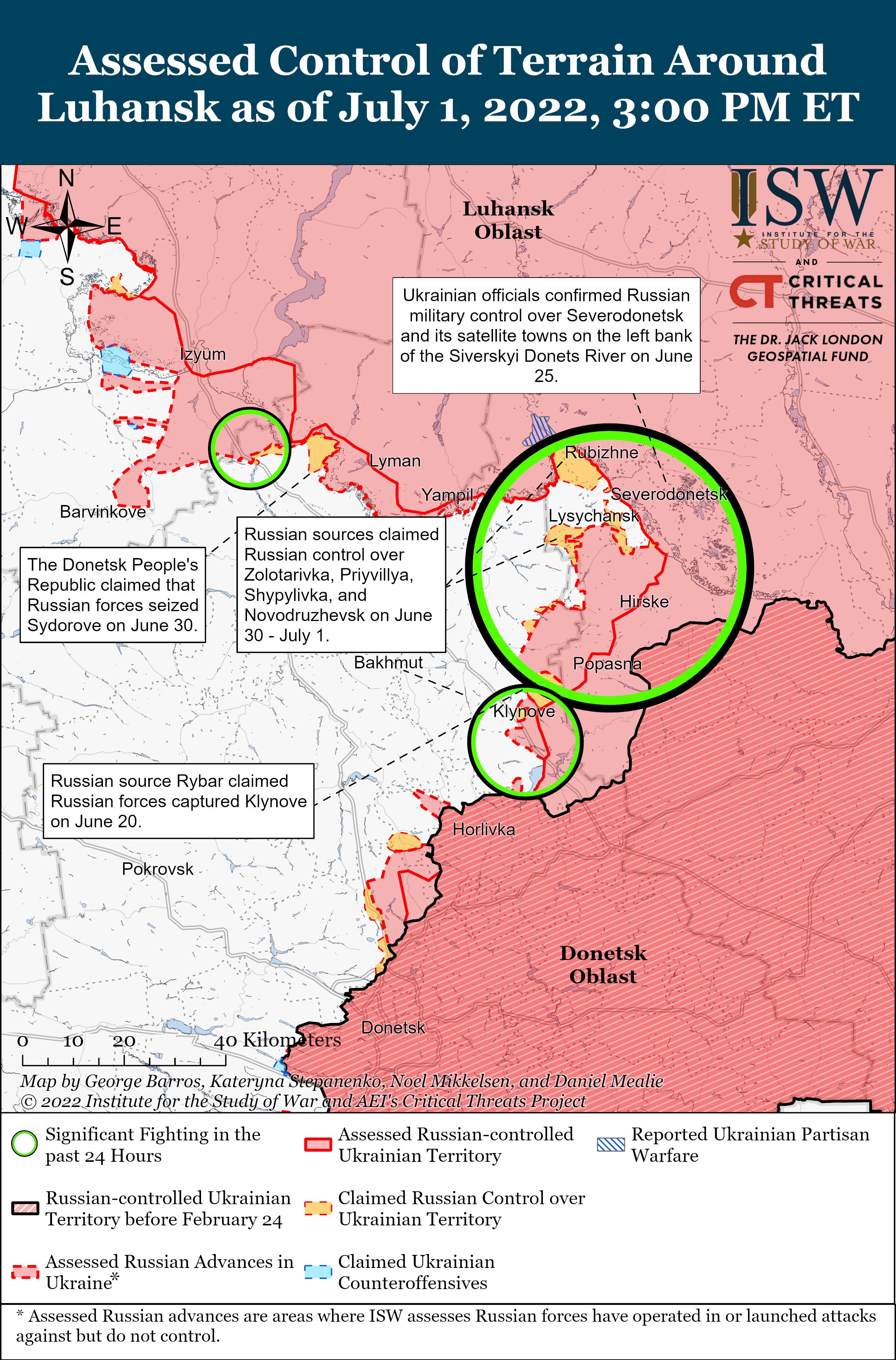 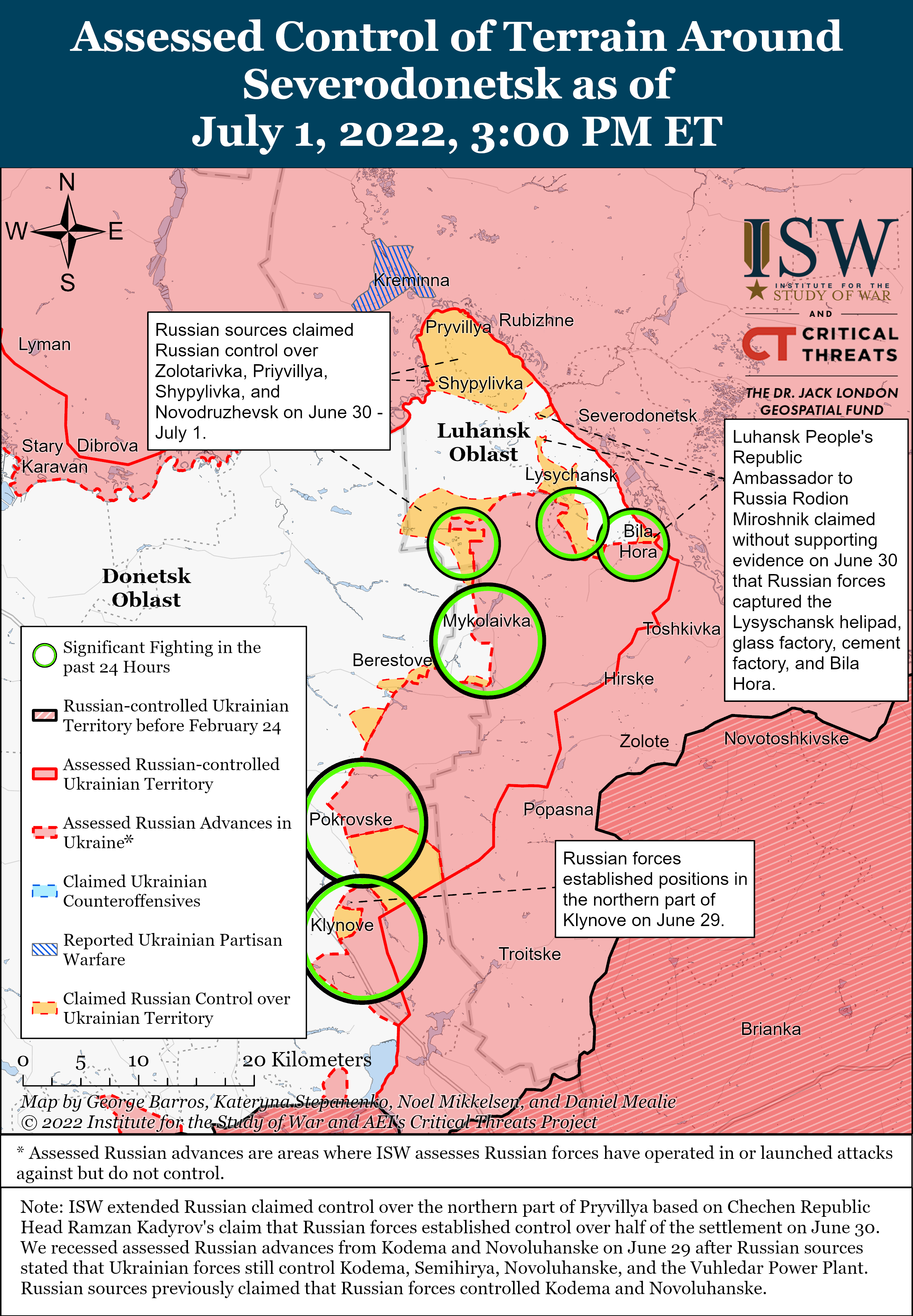 Russian forces continued to conduct offensive operations in settlements south and southwest of Lysychansk in an effort to encircle the city and sever Ukrainian logistics routes on June 1. Head of the Luhansk Oblast Administration Serhiy Haidai reported that Russian forces continued to launch assaults on the Lysychansk Oil Refinery and secured their positions in the northwestern and southeastern parts of the plant.[6] The Russian Defense Ministry claimed that Russian forces seized the Lysychansk Gelatin Factory, but Ukrainian officials stated that Ukrainian forces repelled a Russian reconnaissance-in-force against the plant.[7] Russian forces attacked Topolivka, the northern part of Vovchoyarivka, and Maloryazantseve, and are interdicting Ukrainian lines of communication along the Topolivka-Lysychansk road.[8] Russian Telegram channel Rybar claimed that fighting is ongoing in Bila Hora, just southeast of Lysychansk, which if true, would indicate that Ukrainian forces continue to defend the western bank of the Siverskyi Donetsk river.[9] Luhansk People’s Republic (LNR) Ambassador to Russia Rodion Miroshnik claimed that Russian forces established a bridgehead from Synetskyi in the area of the Lysychansk helipad, situated in the northeastern part of the city, and began advancing southwest to the city center.[10] Miroshnik additionally claimed that Russian forces conducted operations near the Lysychansk Rubber Factory in the southeast part of the city. Russian sources continued to issue numerous reports of a successful Russian river crossing near Kreminna, but ISW cannot independently verify such claims with available satellite imagery.[11] Chechen fighters published a video claiming to have seized Pryvillya and reached Novodruzhensk on July 1.[12] The Ukrainian General Staff reported shelling in Pryvillya, however.[13]

Russian forces maintained artillery fire and launched airstrikes along the T1302 Bakhmut-Lysychansk highway, but have not completely severed the road as of July 1.[14] Haidai reported that Russian forces have not reached the T1302 on the ground, likely due to Ukrainian resistance in settlements along the highway.[15] Both Russian and Ukrainian sources stated that Russian forces shelled Ukrainian positions in the vicinity of Bakhmut and along the T1302.[16] The Ukrainian General Staff reported that Russian forces unsuccessfully attempted to improve their tactical positions to support the advance towards Pokrovske and launched airstrikes on Pokrovske and  Klynove.[17] Rybar claimed that Wagner Group forces attempted to break through Ukrainian defenses in the Bakhmut direction, but Ukrainian officials did not report active ground assault east of the city on July 1.[18]

Russian forces did not conduct offensive operations north of Slovyansk on July 1 and instead focused on regrouping troops, maintaining artillery fire, and improving their tactical positions.[19] Kharkiv Oblast Administration Head Oleg Synegubov stated that Russian forces are regrouping units, likely in an effort to resume an offensive on Slovyansk.[20] The Ukrainian General Staff reported that Russian forces intensified unspecified hostilities in the Lyman area and shelled Siversk, likely in an effort to disrupt Ukrainian ground lines of communication (GLOCs) in the Siversk area that run to Lysychansk.[21] Geolocated footage showed Ukrainian forces striking a Russian Air Force maintenance base near Kunie, situated 22km north of Izyum and adjacent to a connecting road that leads to Russian GLOCs to Izyum.[22] Other geolocated footage also showed separate Ukrainian strikes on Russian supply stockpiles and vehicles in the same area north of Izyum.[23] 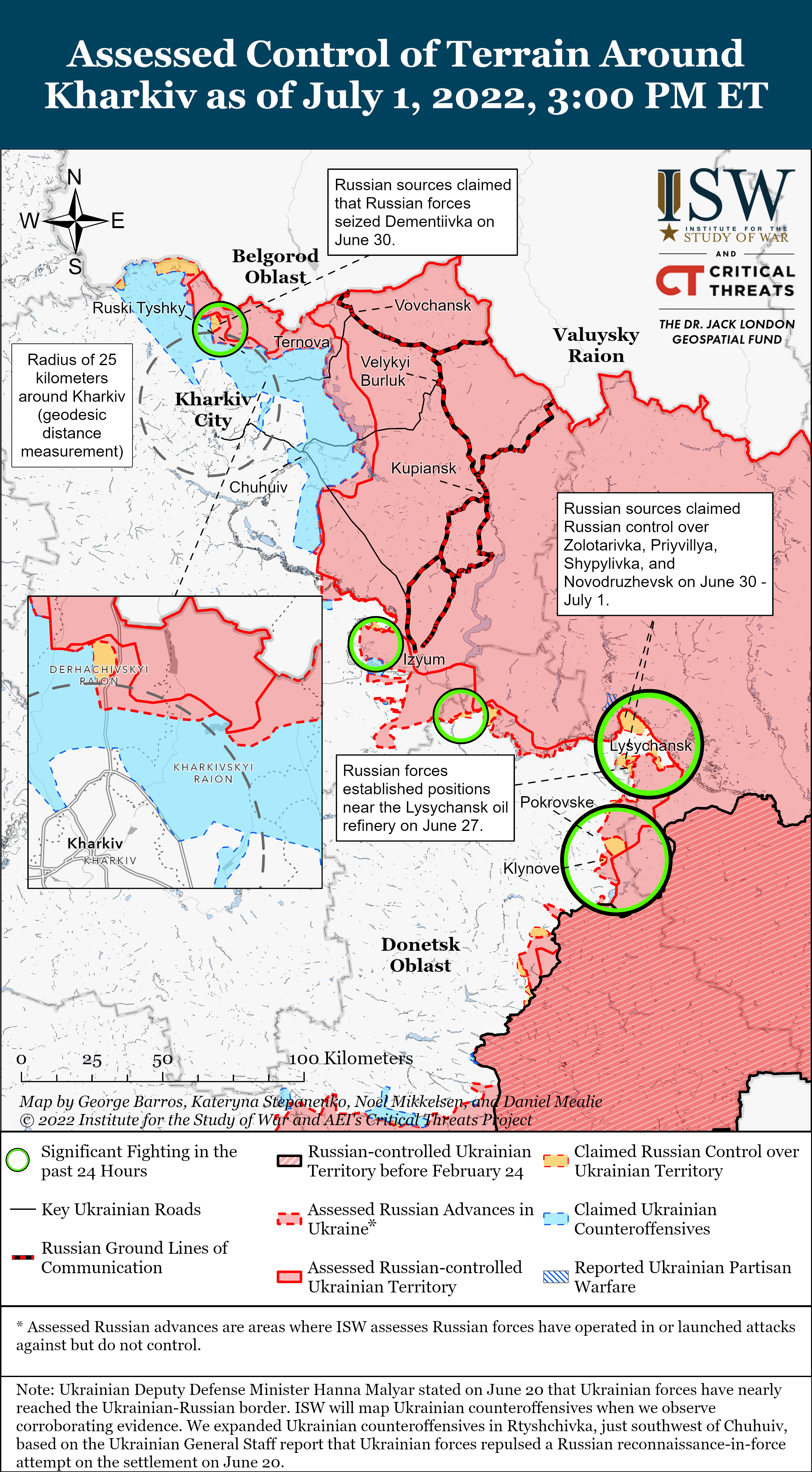 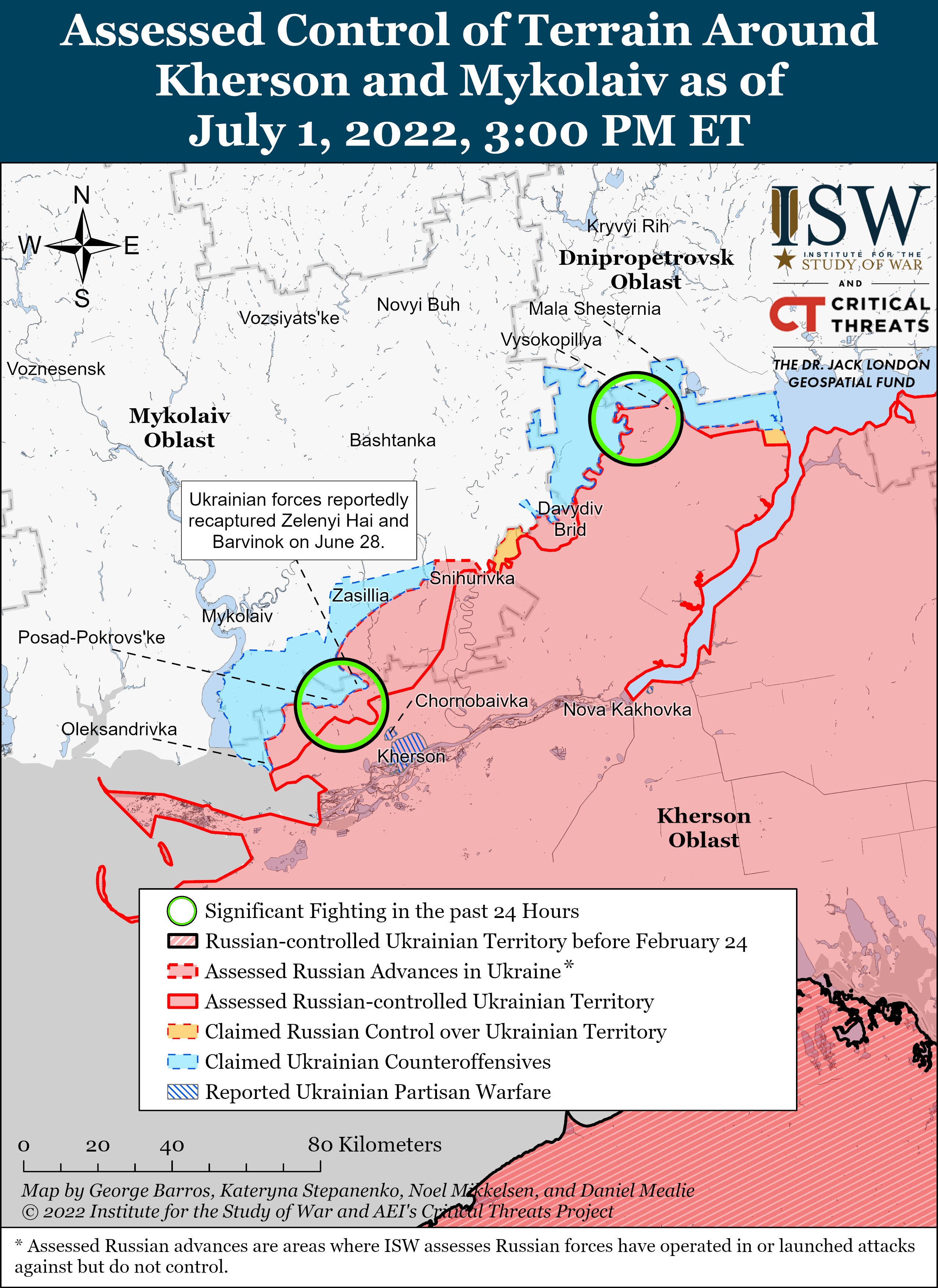 The Russian military leadership continued efforts to expand the pool of servicemembers available to fight in Ukraine. The Ukrainian General Staff reported that the Russian Eastern Military District is conducting an “active conscription campaign” and opened a “recruitment center for the mobilization reserve” at the points of permanent deployment of the 127th Motorized Rifle Brigade of the 5th Combined Arms Army in Vladivostok and Sergeevka.[31] It is unclear whether the Ukrainian General Staff is referring to a volunteer recruitment drive, a call-up of conscripts, or a call-up of reservists. Authorities of the Donetsk People’s Republic (DNR) are reportedly collecting recent graduates of the DNR's Academy of the Ministry of Internal Affairs for immediate deployment without requisite documentation.[32] Melitopol Mayor Ivan Fedorov additionally claimed that Syrian troops are stationed in Melitopol alongside Russian occupation elements, which indicates that Russian authorities are continuing to leverage foreign combat reserves.[33]

Russian authorities are also taking measures to streamline cooperation between the Russian legal system and legislative bodies in occupied areas. Russian Federal Penitentiary Service Director Arkady Gostev signed a memorandum of understanding for law enforcement with the Luhansk People’s Republic’s (LNR) First Deputy Minister of Internal Affairs Roman Vedmedenko, which will facilitate further integration of the LNR into Russia’s criminal law and prison system.[37] Such measures are part of a wider campaign by Russian authorities to set frameworks of cooperation between occupied Ukrainian areas and Russian political elements in order to shape the development of occupied areas in a way that resembles Russian structures and is conducive to direct integration.