Russian forces are continuing a measured return from the operational pause and conducted limited ground attacks in Donetsk Oblast on July 17. As ISW has previously noted, the end of the Russian operational pause is unlikely to create a massive new wave of ground assaults across multiple axes of advance despite Russian Defense Minister Sergei Shoigu’s public order for exactly that. Russian troops are prioritizing advances around Siversk and Bakhmut while maintaining defensive positions north of Kharkiv City and along the Southern Axis. Russian forces continued to set conditions for resumed offensives toward Slovyansk, shelled settlements along the Izyum-Slovyansk salient, and otherwise conducted artillery, missile, and air strikes throughout Ukraine. The Russian Ministry of Defense notably did not claim any new territorial gains on July 17. ISW continues to forecast that the end of the operational pause will be characterized by a fluctuating and staggered resumption of ground offensives. 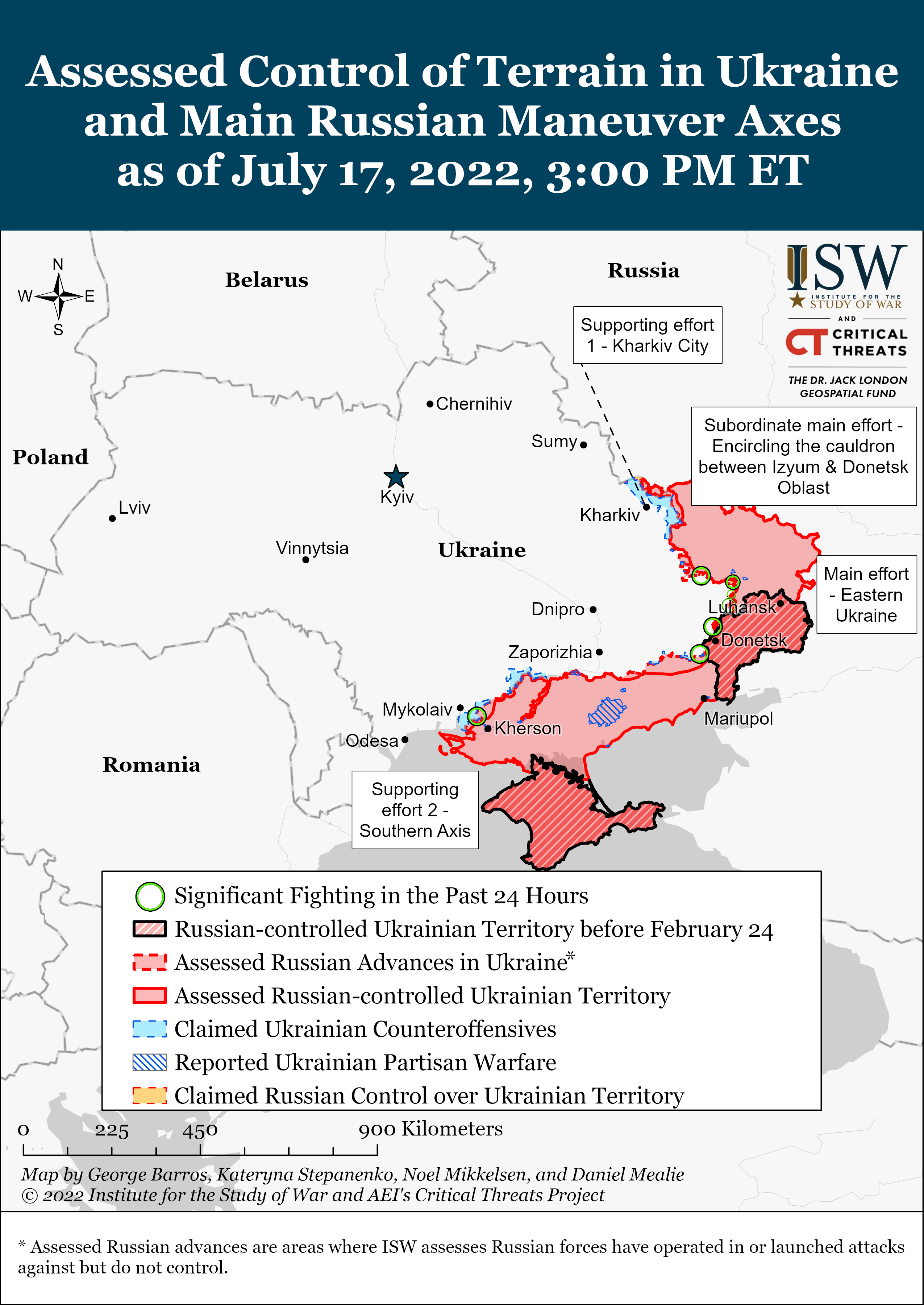 Russian forces continued to fire on settlements southeast of Izyum and did not make any confirmed ground attacks in this area toward Slovyansk on July 17. The Ukrainian General Staff reported that Russian troops shelled in the vicinity of Dolyna, Dibrovne, Ivanivka, Mazanivka, Bohorodychne, and Kurulka—all near the Kharkiv-Donetsk Oblast border northwest of Slovyansk.[1] 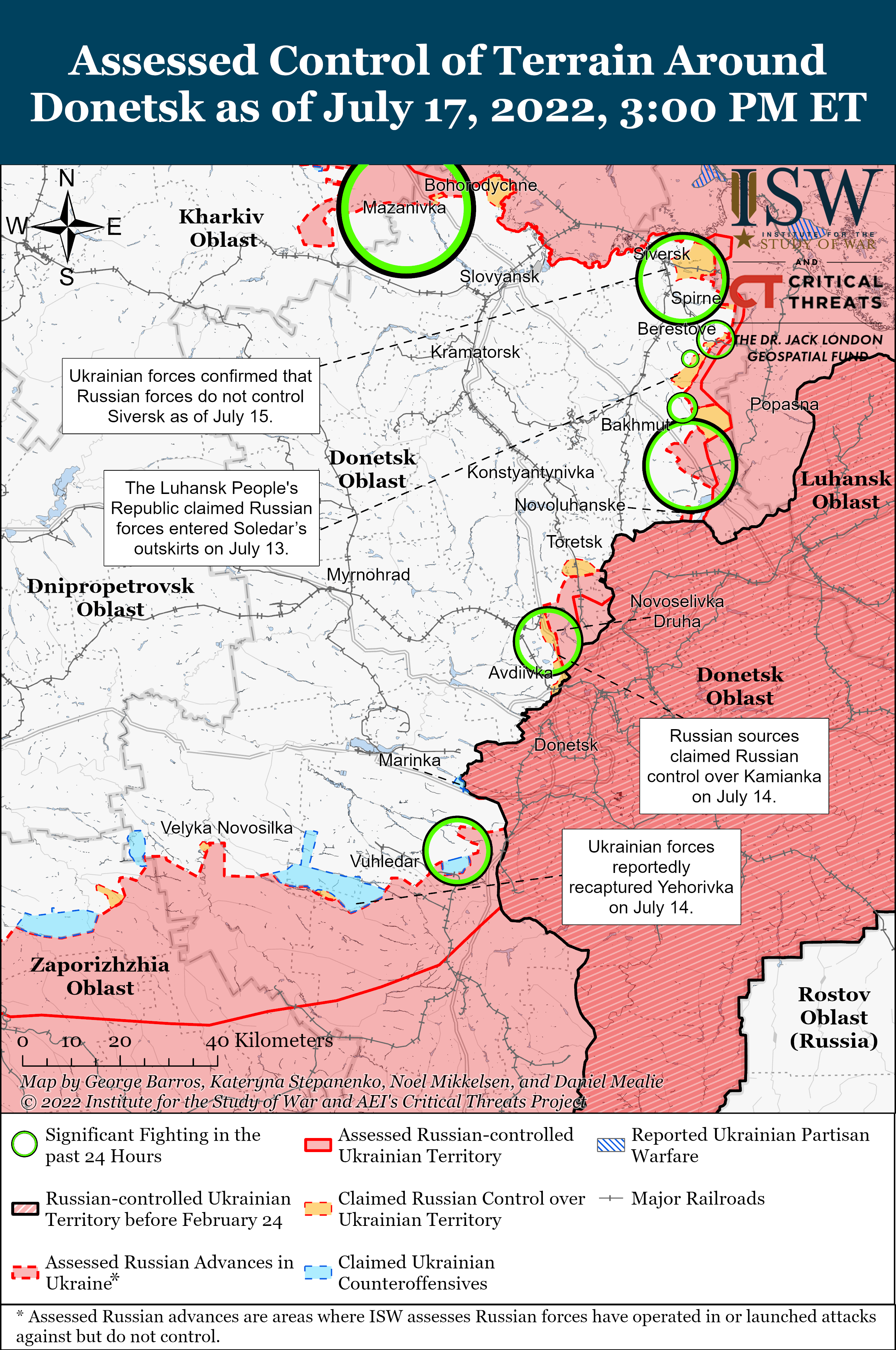 Russian Telegram channel Rybar claimed that Russian forces launched an unspecified strike on the Khartron Express research and production enterprise in the Kyivskyi district of Kharkiv City on July 17.[13] Rybar claimed that the Khartron Express enterprise hosted Polish and British military instructors who trained Ukrainian forces in the area.[14] Rybar also claimed that the enterprise served as a hub for Ukrainian reconnaissance and planning operations.[15] ISW cannot independently verify the exact location of the strikes at this time. 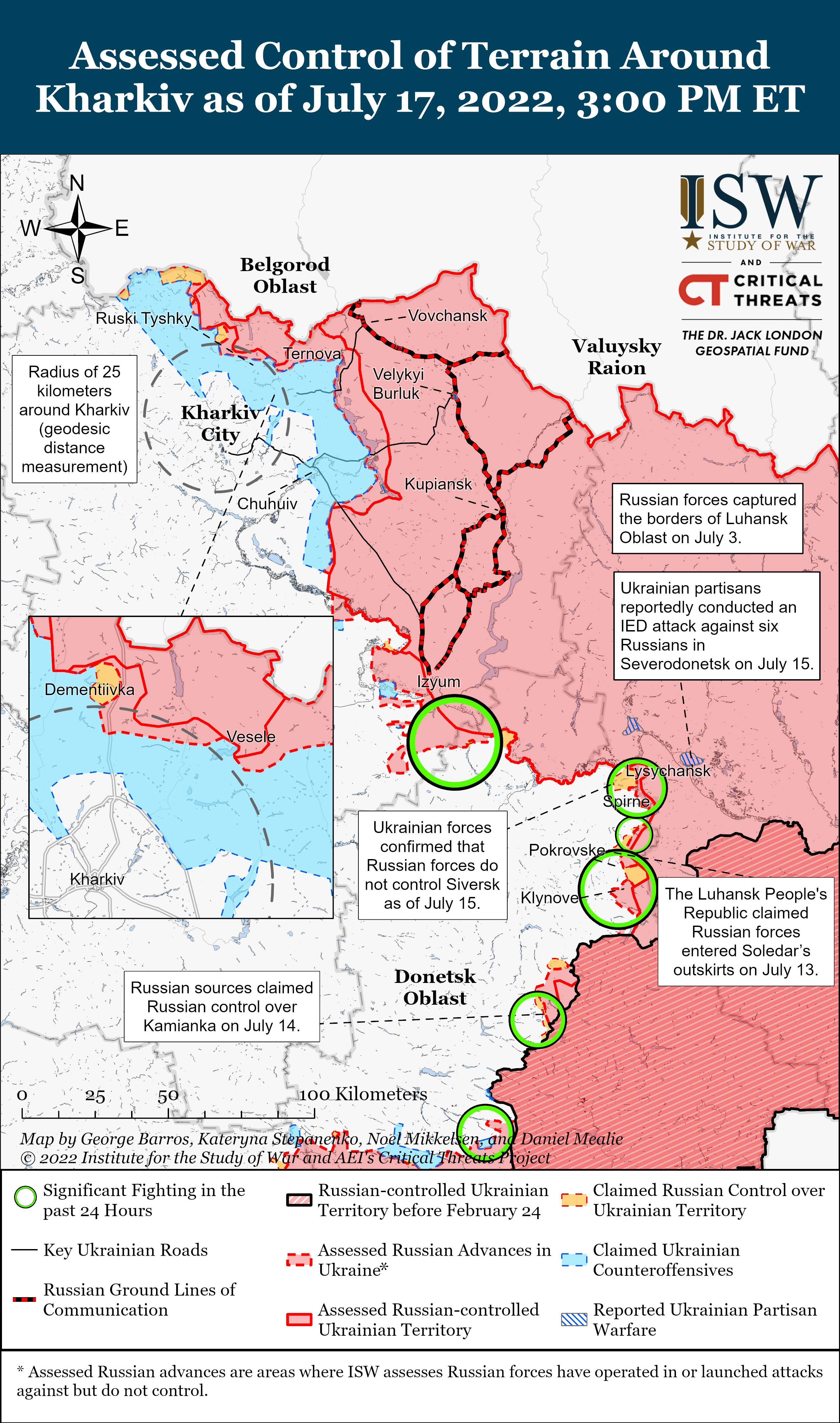 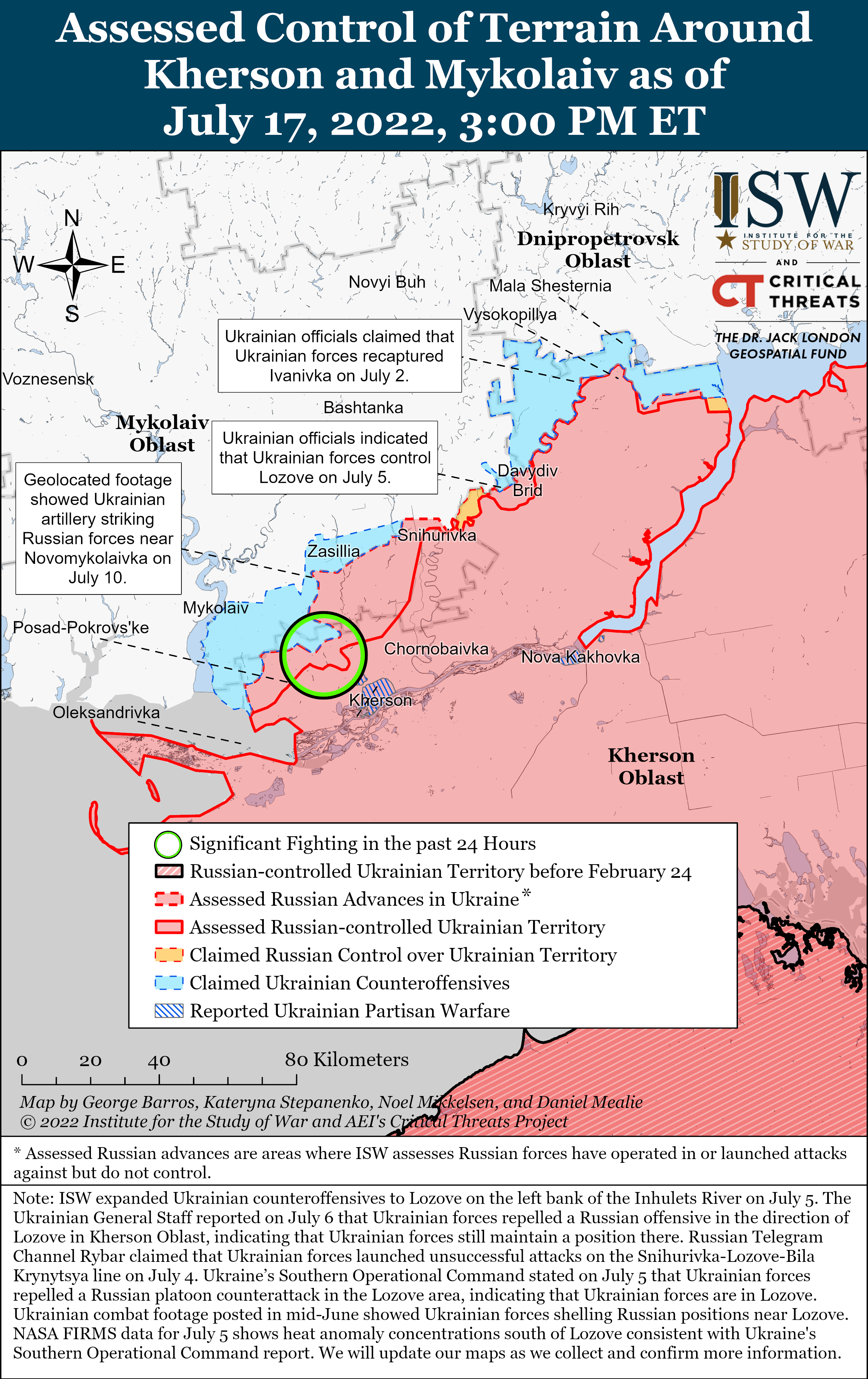 The Kremlin is likely undertaking long-term force regeneration efforts that would allow the Kremlin to rebuild the badly damaged Russian military and/or sustain a long war in Ukraine. The Ukrainian Main Intelligence Directorate (GUR) reported that the Russian Young Army Cadets National Movement (Yunarmia) opened 500 new cadet classes and 1,000 junior army classes in Belgorod and the border region of Belgorod Oblast.[21] Yunarmia accepts volunteers from ages eight to 18, so any volunteers entering this program will not likely be ready to enter combat for quite some time.[22] The GUR additionally reported that the Russian Volunteer Society for Assistance to the Army, Aviation, and Navy of Russia (DOSAAF) opened an additional military training course in Belgorod for those without military experience who want to join the Russian military.[23]

The Ukrainian Association of Reintegration of Crimea reported that the Kherson occupation authorities have enacted a new law—likely referring to the July 15 censorship decree criminalizing criticism of Russian authorities, the Russian military, and the invasion of Ukraine—that allows the authorities to deport any Ukrainians found in violation of the law.[24]

Russian-backed occupation authorities are possibly propagandizing the threat of Ukrainian partisans to justify increased societal control measures. Ukrainian Mayor of Enerhodar Dmytro Orlov stated on July 17 that Russian occupation authorities in Zaporizhia Oblast are manufacturing “non-existent partisans” as part of an effort to claim that Russian forces are successfully mitigating the threat of Ukrainian partisan activity.[25] Orlov stated that the creation of these “non-existent partisans” provides Russian forces with activity to report to their commanders, a means to justify increasingly oppressive administrative measures, and the ability to blame partisans for the occupation authorities’ and Russian forces’ offenses.[26]