The Ukrainian counteroffensive in Kherson Oblast has gotten the attention of Russian forces in the area, and the Russians are scrambling to secure the vital ground line of communication (GLOC) the Ukrainians have threatened.  Ukrainian forces carried out a series of organized counterattacks targeting settlements on the eastern bank of the Ihulets River that are very close to a key highway supporting Russian forces further north. The Russians have responded by destroying the bridges the Ukrainians used in one of those counterattacks and other bridges across the river in an effort to hold their line against anticipated continued Ukrainian counter-offensive operations. Ukrainian forces are likely still close enough to the highway to disrupt its use as a main supply route, potentially undermining the Russians’ ability to hold against Ukrainian counter-offensives from the north.

Russian milbloggers are expressing growing alarm about the threat of Ukrainian counteroffensives in the areas Russian forces have deprioritized while concentrating on Severodonetsk. Russian milbloggers have increasingly focused on tracking the rate of Ukrainian counterattacks in late May.[1] Pro-Russian Telegram channel “Dmitriyev” (over 100,000 followers) reported that Ukrainian forces are fully capable of inflicting ”painful and cutting blows” on Russian GLOCs in Kherson, Kharkiv, and Zaporizhia Oblasts by July-August due to lack of adequate Russian defensive forces in the areas.[2]  Former Russian Federal Security Service (FSB) officer and milblogger Igor Girkin claimed that Ukrainian forces “will grope for weakness” in Russian defenses in Kherson Oblast.[3] Russian milbloggers are effectively criticizing the Russian military command for endangering Russian territorial gains across other axes by prioritizing the Donbas offensive operation so heavily.

Russian authorities are likely anticipating Ukrainian partisan pressure in Luhansk Oblast. The Main Ukrainian Intelligence Directorate (GUR) announced on June 1 the launch of the “Luhansk partisan” project to galvanize resistance to Russian attempts to consolidate control of Luhansk Oblast.[4]  A Russian Telegram channel reported that the Russian Internal Ministry is sending a special detachment of its employees on “leave” to the Luhansk People's Republic (LNR), which is a likely attempt to reinforce Russian administrative presence in the LNR in the face of growing internal and partisan discontent.[5] The Ukrainian General Staff additionally stated that Russian forces moved a battalion tactical group (BTG) to Kupyansk, a Russian-controlled city in eastern Kharkiv Oblast along the P07 highway within 30 kilometers of the Luhansk Oblast administrative border.[6] Kupyansk is far from the front lines and in no apparent danger of imminent Ukrainian conventional attack.  Taken together, the reported deployment of Internal Ministry employees and a BTG suggest that Russian forces are anticipating partisan resistance against their attempts to gain control of Luhansk Oblast.

Russian forces continue to undermine the economic viability of areas they are attempting to capture. Russian forces reportedly hit the “Azot” fertilizer production plant in Severodonetsk on May 31 and caused the dissemination of toxic nitric acid smoke.[7] The production plant was an economically-significant resource for Severodonetsk and the Luhansk region and it would have been prudent for Russian forces to maintain and take control of the plant’s production capabilities. Russian forces similarly destroyed the Azovstal Steel Plant in Mariupol, which had considerable industrial significance for Ukraine and could have been economically exploited by Russian occupiers if they had not destroyed it. While the Azot plant in Severodonetsk was less productive on whole than Azovstal, its destruction is part of the systemic failure of Russian forces to take effective control of the economic and industrial capabilities of occupied territory. Russian forces will likely continue to destroy productive infrastructure and continually undermine the economic benefits they could have hoped to gain from occupied territories. 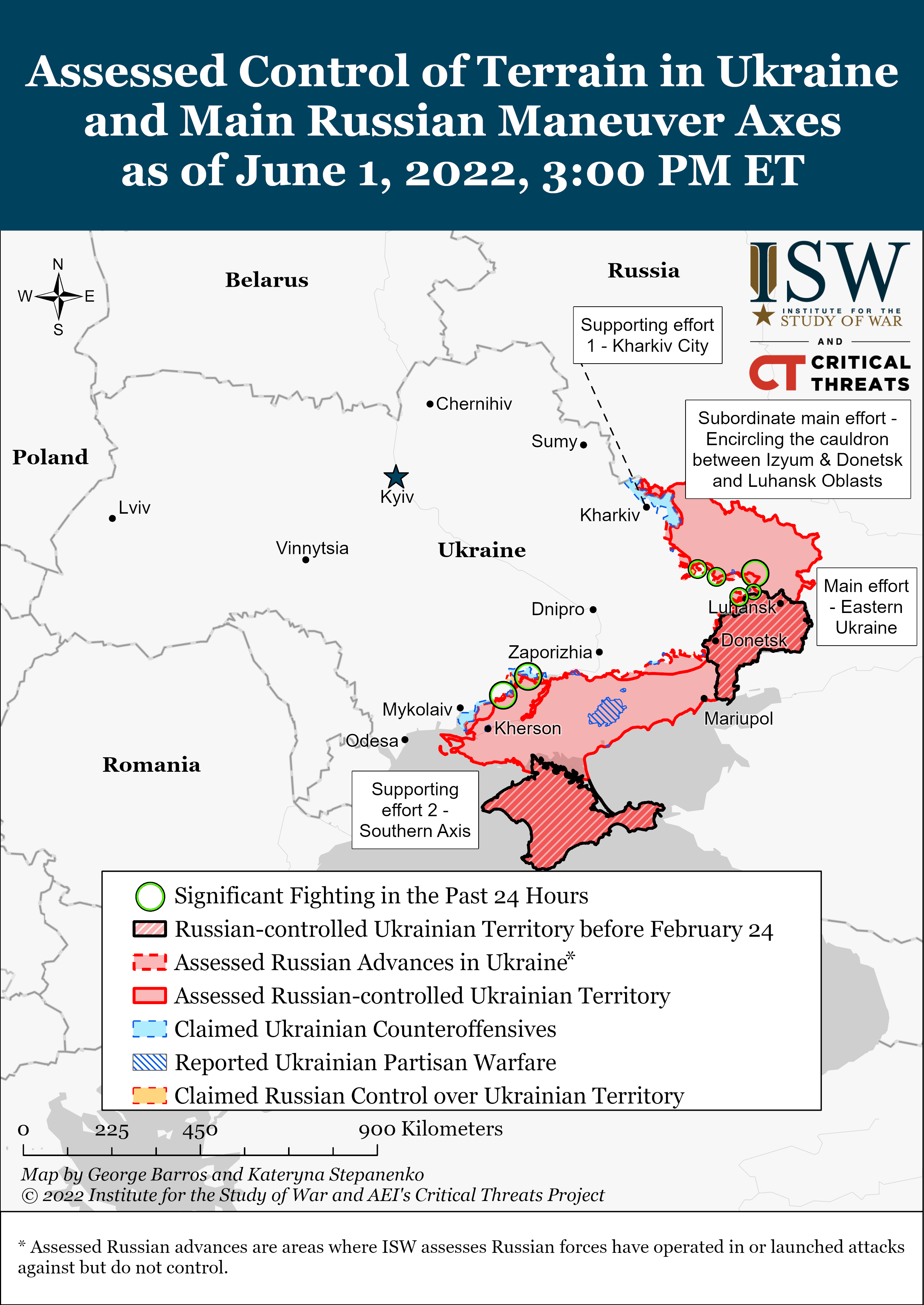 Russian forces reportedly made advances to the north of Slovyansk and took control of Yarova and Svyatohirsk and are conducting westward offensives from Lyman towards Slovyansk.[10] In order for Russian forces to gain access to Slovyansk via road, however, they would have to cross a bridge across the Severskyi Donets River outside of Raihorodok, and ISW has not yet seen evidence that they have been able to do so, which suggests Russian forces do not yet control the road into Raihorodok-Slovyansk.

Russian forces continued to advance within Severodonetsk on June 1.[11] Head of Luhansk Regional State Administration Serhiy Haidai stated that Russian troops now control upwards of 70% of the city and that Ukrainian troops are retreating from the city center.[12] Russian Telegram channels additionally indicated that Russian forces are fighting in Ustynivka and Myrna Dolyna, which is a likely attempt to advance northwest to Lysychansk without having to cross the Siverskyi Donets River from Severodonetsk.[13] Russian forces are reportedly fighting for control of Bilohorivka (where they attempted a costly and failed crossing of the Severskyi Donets River in early May) and Vrubivka, which would allow them to advance on Lysychansk from the west.[14] Ukrainian forces likely are holding onto Toshkivka, south of Severodonetsk, after reports that Russian forces lost their positions in Toshkivka on May 28.[15] Russian forces have continued ground and artillery attacks against Toshkivka to attempt to regain lost positions.[16]

Russian forces continued ground, air, and artillery attacks against Donetsk Oblast on June 1.[17] Russian troops continued fighting to the east of Bakhmut around Komyshuvakha, Berestove, Nyrkove, Pylypchatyne, and Svitlodarsk in order to gain access to highways to the northeast of Bakhmut, which would facilitate attempts to encircle the Severodonetsk-Lysychansk area.[18] The Ukrainian General Staff reported that the Russian grouping around Avidiivka is holding its positions in the area, and the Donetsk People’s Republic (DNR) claimed that DNR troops encircled Ukrainian troops in Avdiivka.[19] Russian forces reportedly cut the Donetsk City-Avdiivka-Konstantinivka highway.  Russian forces have been close enough to the highway for some time that Ukrainian forces have probably not been relying on it as a main supply route.  If the Russians could secure it from its base (rather than simply cutting it), however, they could be able to use it advance northward towards Konstantinivka, Kramatorsk, and Slovyansk.[20] Russian forces are fighting north of Avdiivka in the vicinity of Krasnohorivka and on the southern outskirts of Niu York.[21] 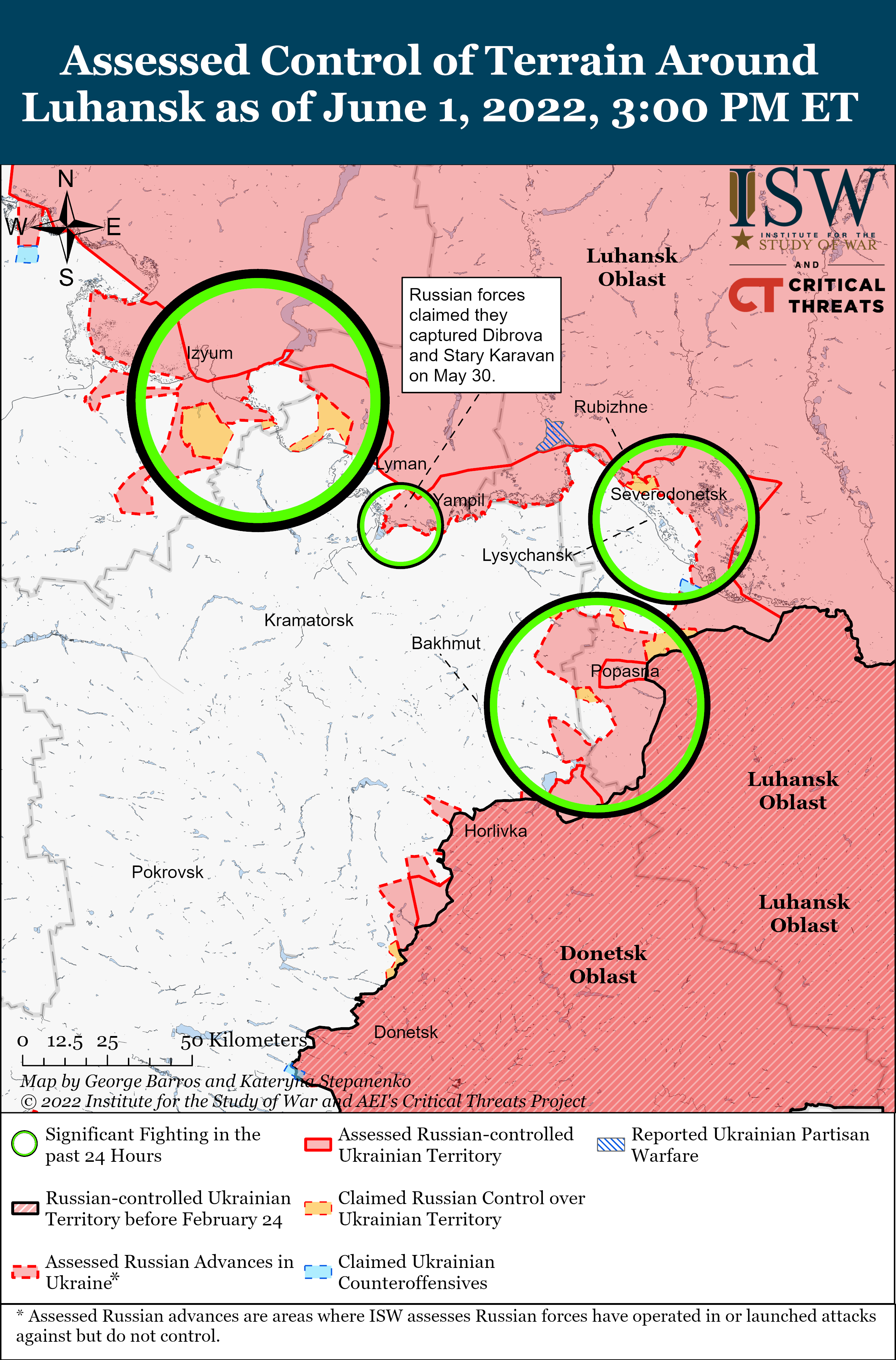 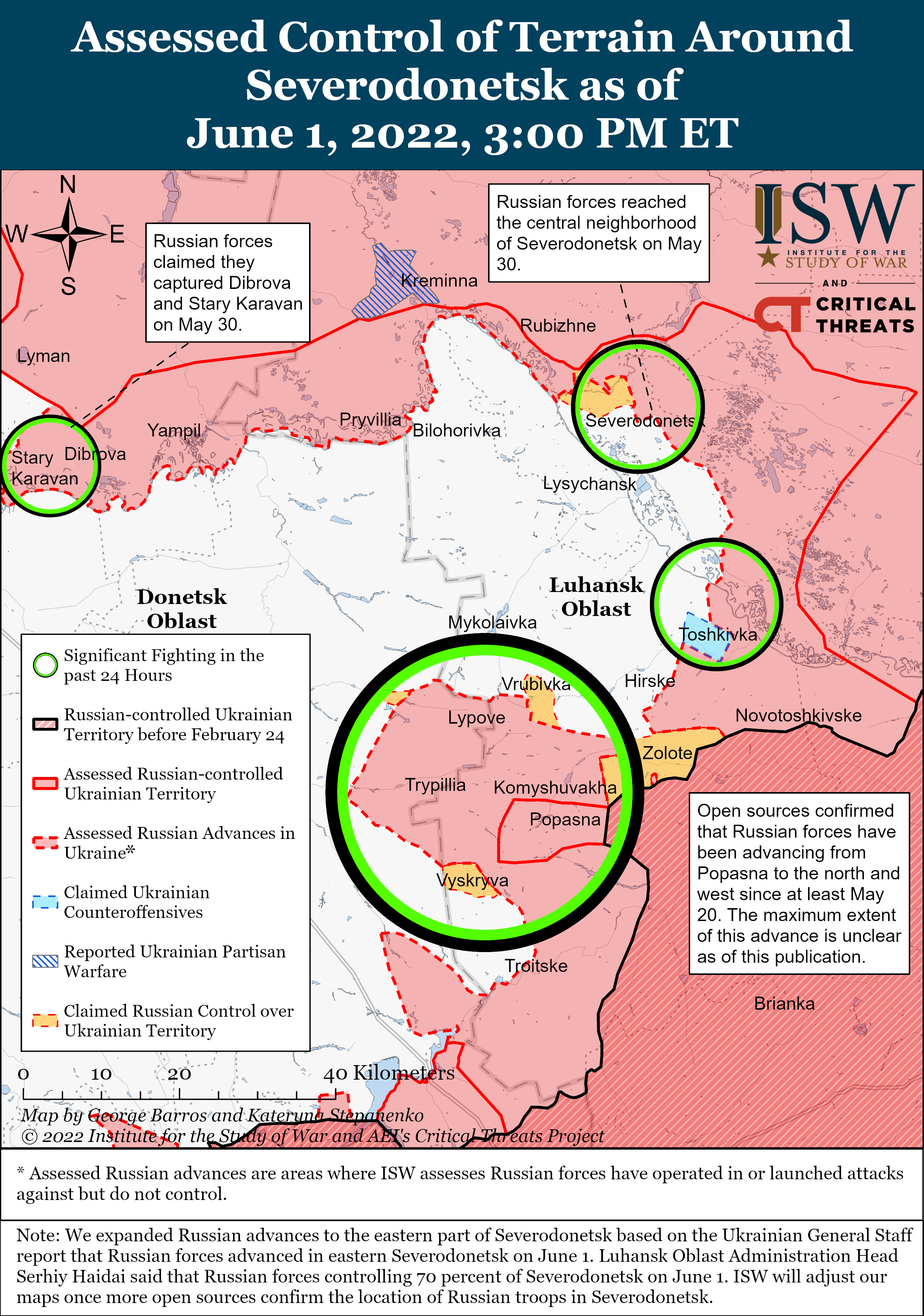 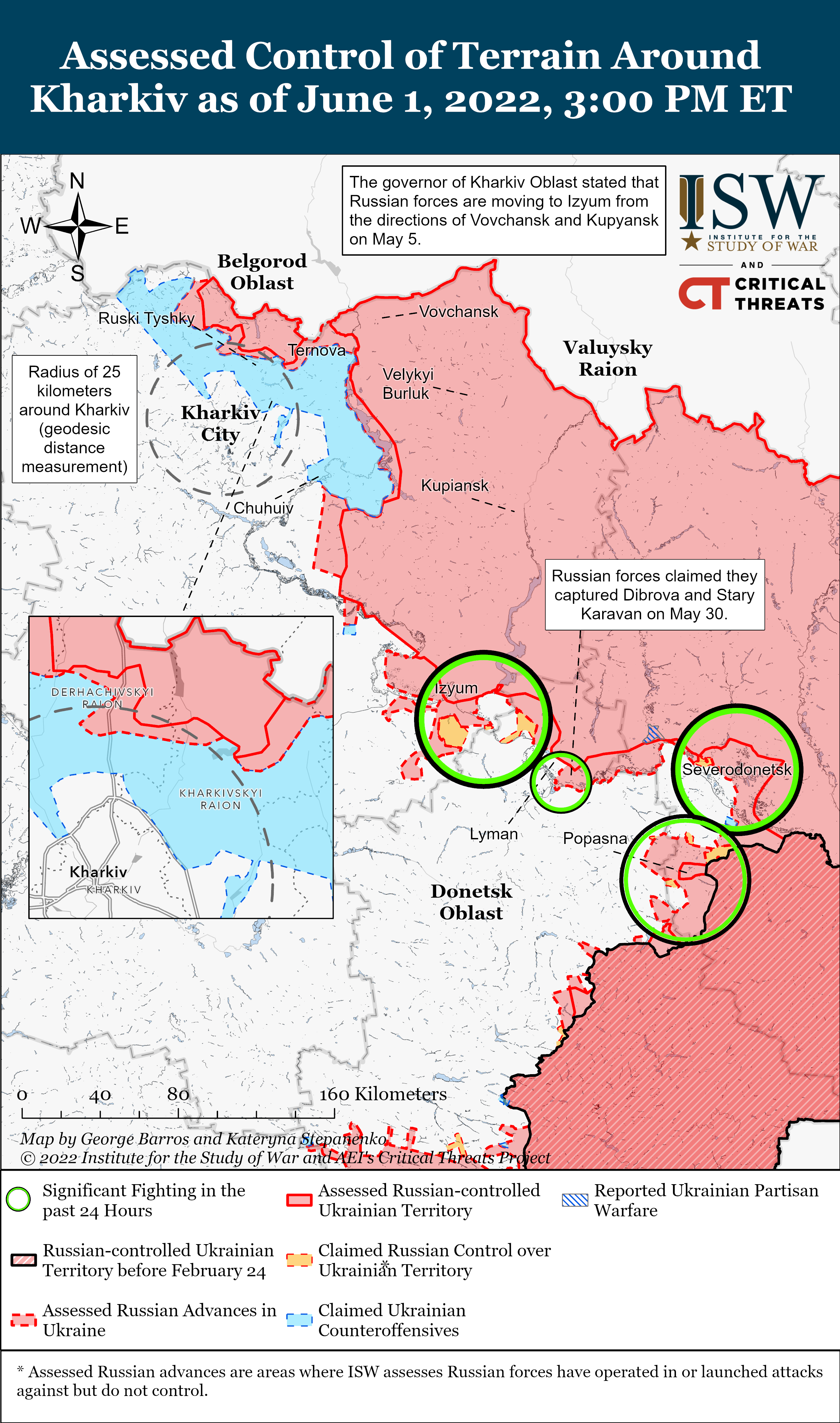 Ukrainian forces continued to threaten Russian ground lines of communication (GLOCs) in northeastern Kherson Oblast, despite Russian forces restricting further Ukrainian counteroffensives on May 31 and June 1. The Ukrainian Southern Operational Command reported that Russian forces destroyed bridges over the Inhulets River in Davydiv Brid, an operationally significant settlement located on the Russian-controlled T2205 highway.[23] Russian forces likely destroyed bridges in an effort to hinder Ukrainian efforts to reach Davydiv Brid on May 31.[24] Ukrainian forces can likely still disrupt Russian forces' ability to use the highway as a main supply route if they remain just on the other side of the river, which is less than a kilometer from the road and therefore within range of many tactical systems. Disruption of the T2205 as a primary GLOC could undermine Russian defenses against Ukrainian counteroffensives on the northern Kherson-Mykolaiv Oblast border. Russian forces have also destroyed another bridge just north of Davydiv Brid and intensified artillery fire in northern Kherson, likely in anticipation of continued Ukrainian counterattacks.[25] Russian forces also unsuccessfully attempted to reconnoiter by battle Ukrainian positions on the Mykolaiv-Kherson Oblast on June 1.[26]

Russian forces continued to fortify positions across southern Ukraine in an effort to establish permanent control over occupied territories. The Ukrainian General Staff reported that Russian forces did not conduct any offensive operations in Zaporizhia Oblast, instead executing engineering work for the second lines of defense.[27] The Ukrainian General Staff added that Russian forces transferred likely one T-62 tank battalion and one motorized rifle battalion to Vasylivka, approximately 50km south of Zaporizhia City. ISW has previously reported on an increase in Russian military presence and fortifications east of the Russian-occupied Zaporizhia Nuclear Power Plant (NPP).[28] 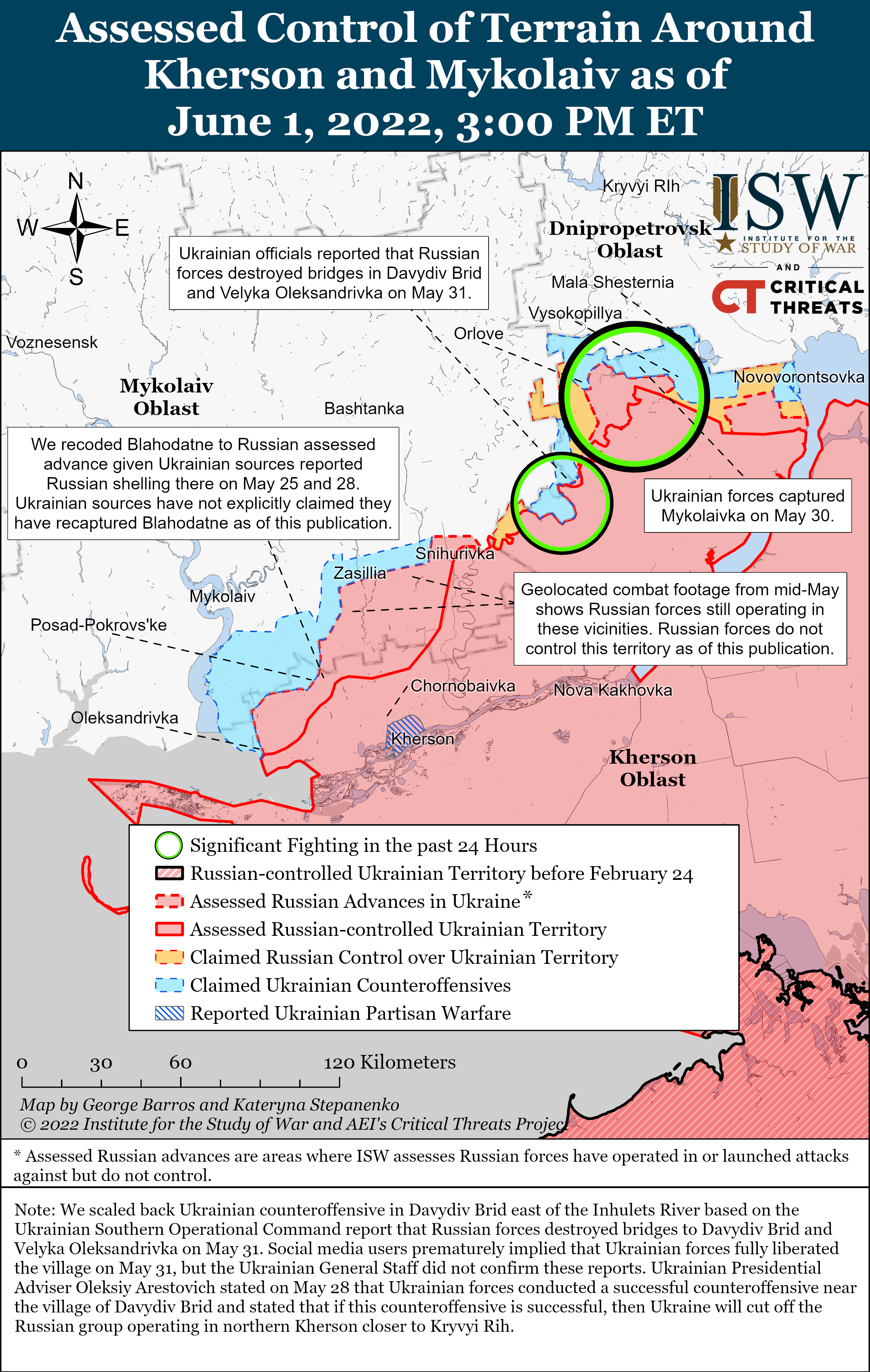 Some Russian milbloggers continue to question Russian policy, this time regarding the status of occupied territories.  The Head of Russian State Duma International Committee Leonid Slutskiy claimed that Russia may annex Kherson Oblast and the Donetsk and Luhansk People’s Republics (DNR and LNR) as soon as July.[30] A small-scale Russian Telegram Channel MoscowCalling ridiculed Slutskiy’s announcement, noting that Russian forces have not secured the land corridor to Crimea via Zaporizhia Oblast.[31] MoscowCalling also noted that without control over Zaporizhia Oblast, Russian forces will not have the capacity to support commercial and administrative routes via the Kerch Strait bridge. Governor of St. Petersburg Alexander Belov and Russian-appointed Head of Mariupol Konstantin Ivanchenko signed a cooperation agreement between two cities on June 1, but it is unclear whether the Kremlin has decided to fully annex Mariupol.[32]