Russian Defense Minister Sergey Shoigu claimed that Russian forces will “accelerate” the “special military operation” in Ukraine in a meeting with Chechen Leader Ramzan Kadyrov on June 3, though Russian forces are unlikely to be able to do so. Kadyrov said that Shoigu has “identified new tasks” that will improve the effectiveness of Russian offensive maneuvers and improve Russian tactics.[1] Kadyrov did not specify which tasks Russian forces will undertake to speed up their pace. Shoigu previously claimed on May 24 that Russian forces were making slow progress in eastern Ukraine to avoid civilian casualties.[2] In a retrospective on the 100th day of the war, the UK Defense Ministry stated that Russian forces will likely establish control over Luhansk Oblast in the next two weeks, though only at significant further cost.[3] The UK Defense Ministry further noted that Russian forces on all other axes have gone over to defensive operations to concentrate all available forces in Severodonetsk, and stated Russia will need to commit sizable investment of manpower and equipment—that it will be unable to generate quickly, if at all—to advance beyond Luhansk Oblast.

A Russian milblogger published a lengthy message on June 3 claiming that nearly the entire 35th Combined Arms Army has been destroyed in Izyum due to incompetent Russian commanders. A Russian milblogger under the pseudonym Boytsovyi Kot Murz said that Russian commanders did not account for combat challenges in the Izyum woods, leading to significant losses in the 64th and 38th Separate Guard Motor Rifle Brigades, which he reported now have less than 100 servicemen in total.[4] Boytsovyi Kot Murz claimed that Russian commanders failed to provide necessary equipment to units fighting in wooded terrain and did not repair Russian heavy artillery in a timely manner. Russian forces also reportedly lacked effective communication with command centers and relied on messengers due to the shortage of encrypted phones. Boytsovyi Kot Murz noted that the lack of communications between Russian units and commanders allowed Ukrainian forces to strike Russian advanced positions with drones. Russian private military company servicemen from Wagner also refused to participate in combat, leading to a significant lack of advances on the Izyum axis. While ISW cannot independently confirm these reports, they are consistent with previous reports of Russian operations and high casualties on the Izyum axis.

Russian and proxy forces reportedly have not sufficiently prepared frontline units with medical supplies, leading to abysmal medical care. Boytsovyi Kot Murz criticized the Russian Defense Ministry for failing to prepare medical equipment and field hospitals for wounded servicemen.[5] Russian commanders reportedly failed to learn lessons from the lack of medical equipment during the Battle of Debaltseve in 2015 and are repeating similar mistakes. Boytsovyi Kot Murz claimed that Russian forces do not provide frontline troops with high pressure bandages and other supplies necessary to address limb injuries in time. Boytsovyi Kot Murz compared expired and underprepared Russian first aid kits to higher quality Ukrainian supplies and claimed that Russian forces do not have volunteer support that could address the shortages in military equipment. Boytsovyi Kot Murz noted that only Russian infantry, that he claimed has been defeated, had necessary medical training—while newly recruited reservists are incapable of providing first aid. Boytsovyi Kot Murz said that Russian medics are conducting an unnecessary number of limb amputations due to the lack medical equipment provided by the Russian Defense Ministry. These claims are consistent with past reports of poor Russian medical care in frontline units, and these conditions are likely a major contributing factor to Russian demoralization and the growing refusal of servicemen to return to frontline units. 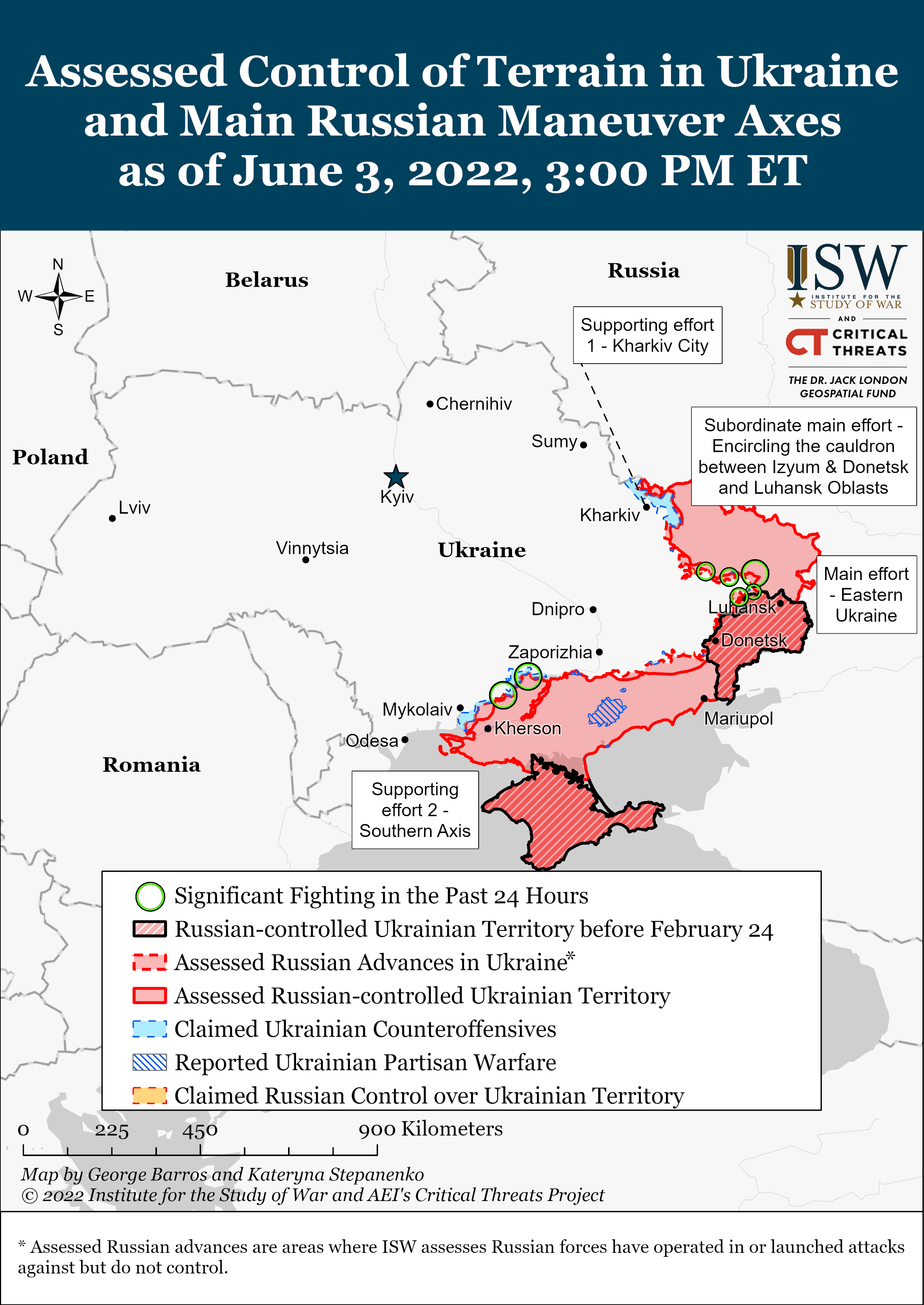 Russian forces attempted a series of unsuccessful assaults on Barvinkove (southwest of Izyum) and several settlements southeast of Izyum on June 3. The Ukrainian General Staff reported that Russian forces attempted to resume an offensive operation towards Barvinkove but did not secure any gains.[8] A Russian attack against Sviatohirsk, approximately 27km southeast of Izyum along the major road to Slovyansk, also failed.[9] Ukrainian Defense Ministry Spokesperson Oleksandr Motuzyanyk reported that Ukrainian forces repelled Russian assaults on Bohorodychne and Dolyna, both located along the Izyum-Slovyansk highway, and Studenok, approximately 18km southeast of Izyum.[10] Russian forces likely attempted to assault Sviatohirsk from both the northwest from Izyum and east from Lyman, as the forward positions of Russian forces on the Lyman front in Bohorodychne are only 5km west of the settlement. The Ukrainian General Staff reported that Russian forces are accumulating up to 20 battalion tactical groups (BTGs) in the Izyum area, but these units are highly unlikely to be fully staffed or equipped.[11] Russian forces may be generating forces and renewing attacks towards Barvinkove, as opposed to continued stalled attacks directly towards Slovyansk from Izyum, in an attempt to bypass Ukrainian defenses. Russian forces are unlikely to make major gains on the Izyum front in the coming days, however.

Russian forces continued to carry out ground assaults in Severodonetsk with partial success on June 3. The Ukrainian General Staff reported that Russian forces conducted assaults on the eastern part of the city and achieved some unspecified successes.[12] Russian forces attacking in Metolkine, just southeast of Severodonetsk, did not make any territorial gains and retreated to previously controlled positions.[13] Luhansk Oblast Administration Head Serhiy Haidai reported that Ukrainian defenders are conducting local counterattacks and retook several blocks in an unspecified location, though ISW cannot confirm the exact control of terrain within Severodonetsk and Russian forces likely control much of the city.[14] The Luhansk People’s Republic (LNR) Ambassador to Russia, Rodion Miroshnik, claimed that Russian and LNR forces are conducting assaults on the outskirts of Severodonetsk and are advancing towards the Azot Chemical Plant to suppress any Ukrainian resistance, intentionally comparing it to the past Ukrainian defense of the Azovstal Steel Plant in Mariupol.[15] A social media video also depicted Russian forces transporting pontoon bridge equipment to the Severodonetsk area to support future attempts to cross the Siverskyi Donetsk River and begin an assault on Lysychansk.[16] Russian forces also failed to take control of the eastern bank of the Siverskyi Donets River in continued assaults.[17] The Ukrainian General Staff reported that elements of the 1st and 2nd Army Corps (the armed forces of the DNR and LNR), the Russian 8th, 58th, and 5th Combined Arms Armies, the 90th Tank Division, and unspecified airborne troops area all committed to ongoing operations to capture Severodonetsk and Lysychansk.[18] These units are likely heavily degraded from earlier operations and operating without repalcements or rotations to rest frontline units after over three months of fighting.

Russian forces conducted several offensive operations towards Bakhmut, Soledar, and Lysychansk from Popasna, but did not secure any new territory.[19] The Ukrainian General Staff claimed that unspecified elements of the 150th Motorized Rifle Division of the Combined Arms Army suffered up to 50% losses of personnel and equipment in Popasna, though this statement is unlikely to refer to the division as a whole.[20] Russian forces did not conduct offensive operations west or east of Avdiivka.[21] A Donetsk People’s Republic (DNR) commander claimed on Russian state television that Russian and DNR forces are slowly advancing near Avdiivka due to strong “Right Sector” resistance (a common Kremlin talking point claiming that any Ukrainian successes are due to actions by nationalist units) in the area.[22] 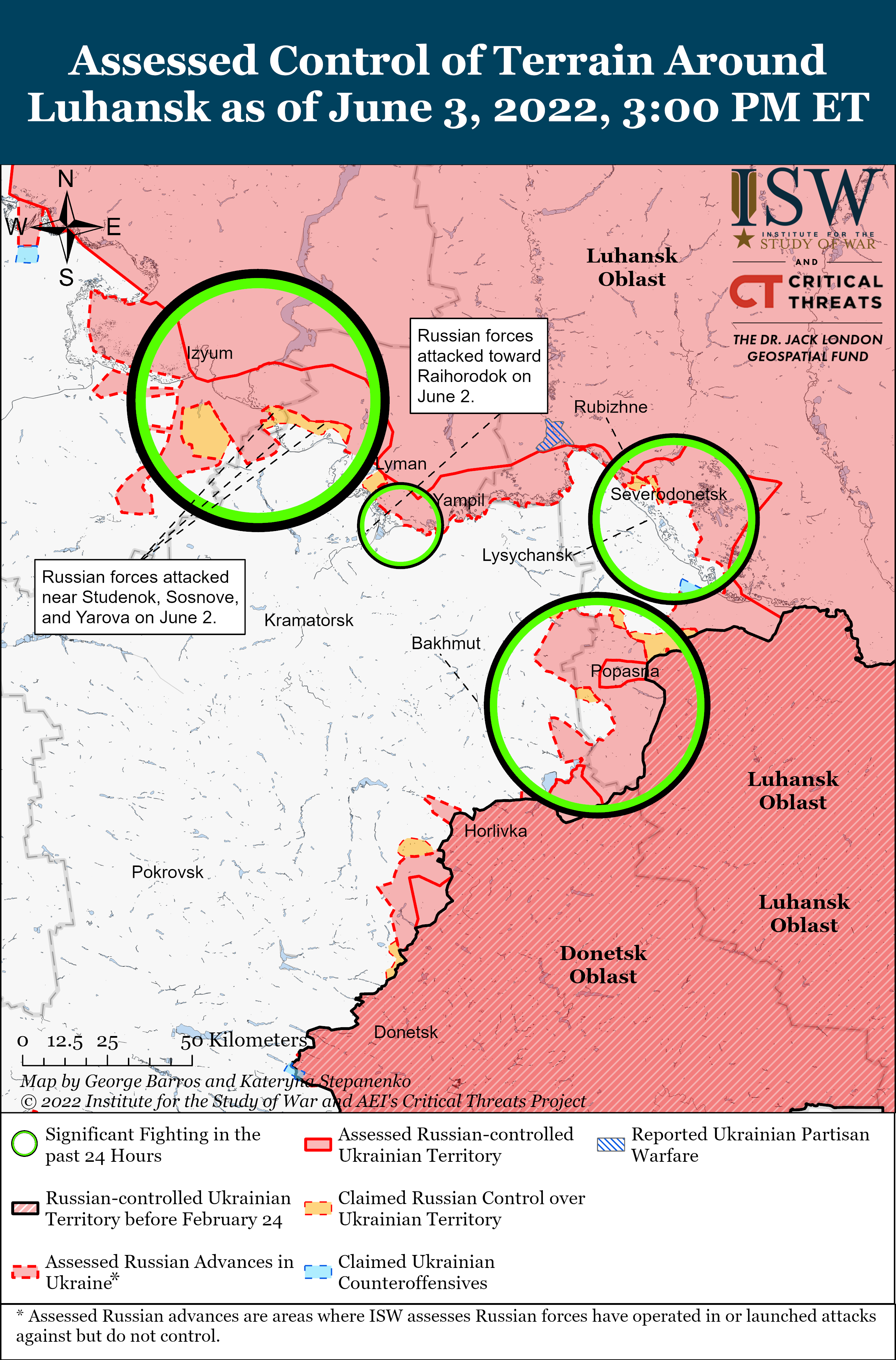 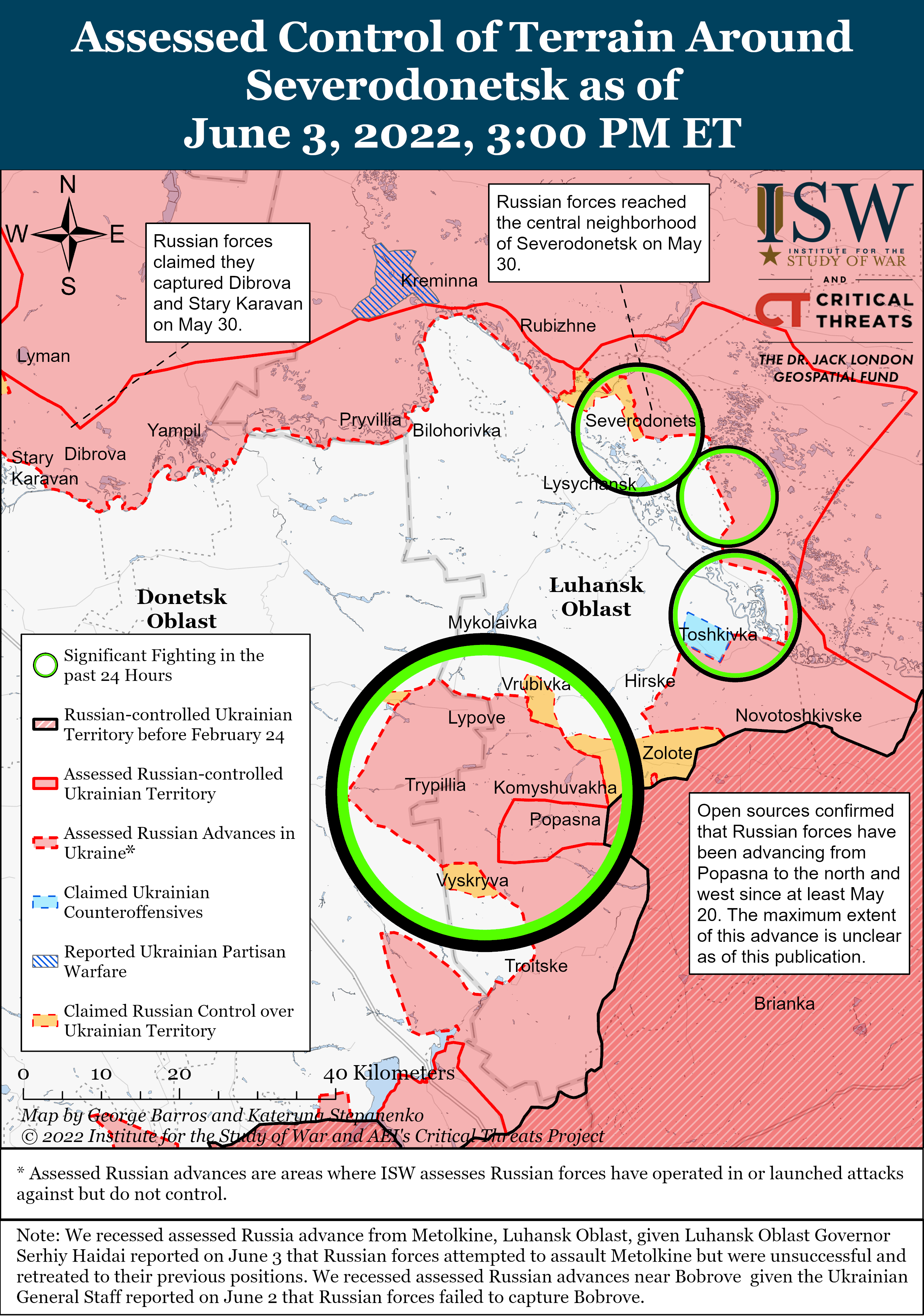 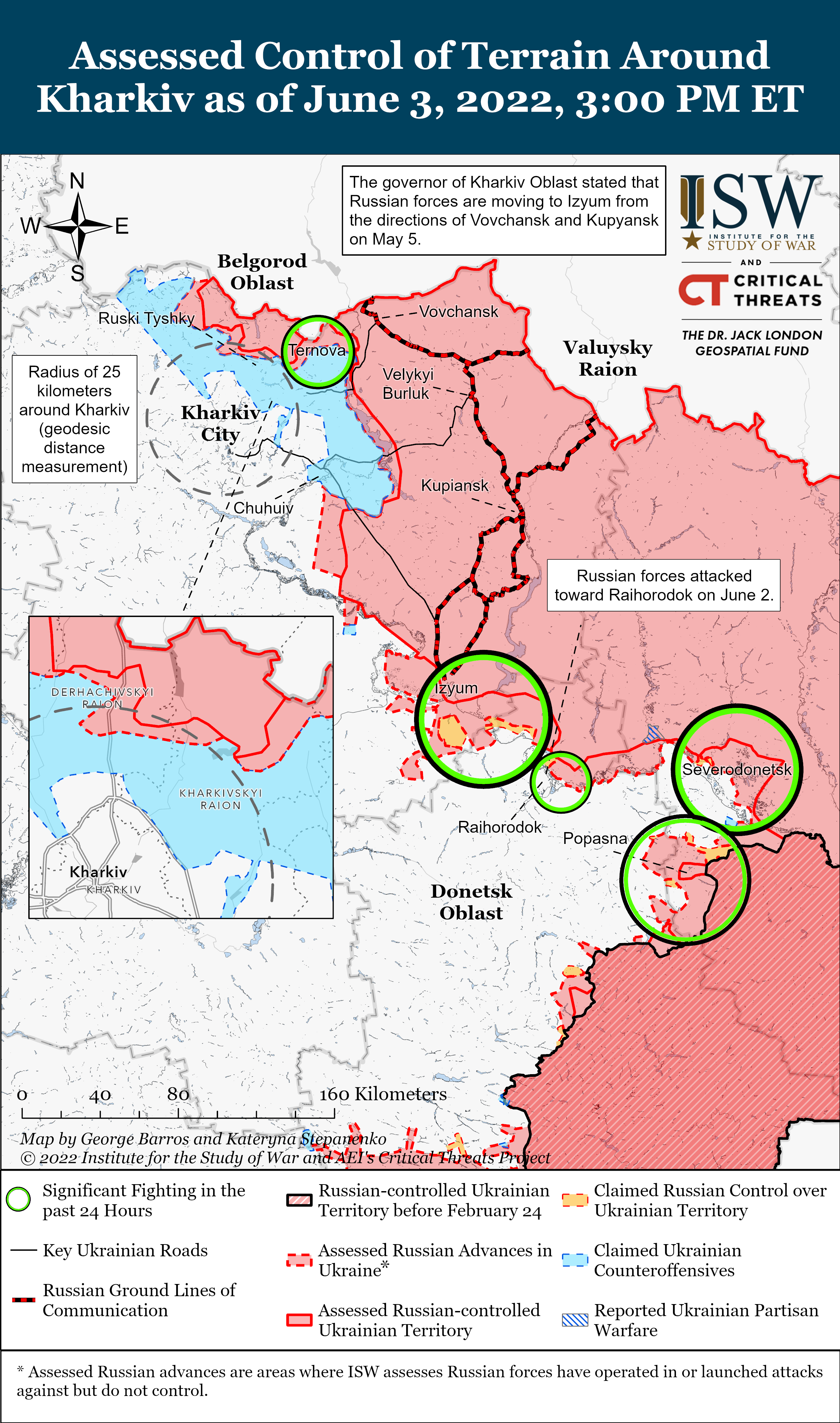 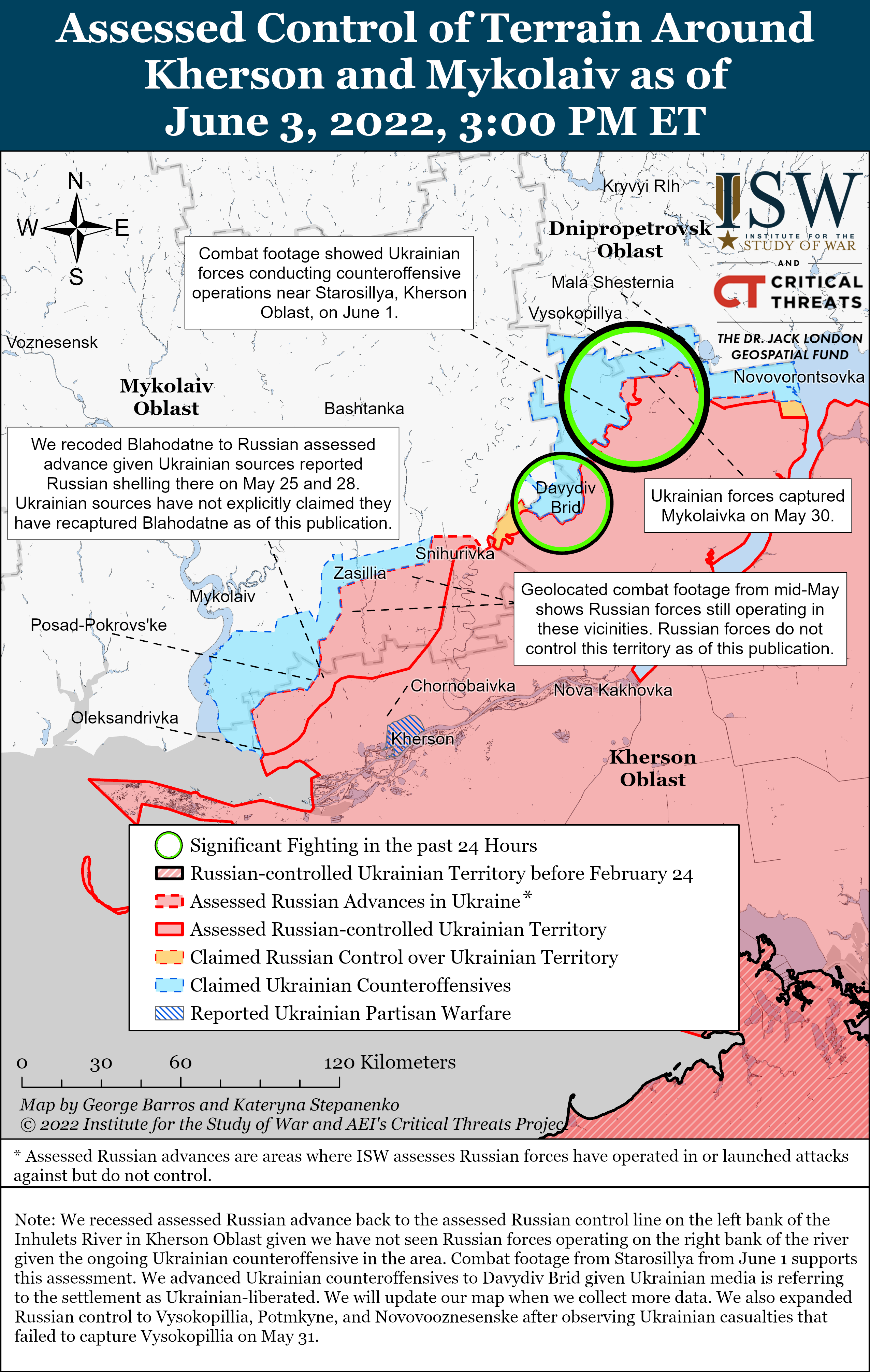 The Kremlin carried out measures to further assert permanent control over occupied Luhansk Oblast and economically link occupied Ukrainian territory to Russia itself at the local level. Moscow Mayor Sergei Sobyanin signed an agreement on trade, economic, scientific, technical and cultural cooperation between Moscow and Luhansk City with the Head of the Luhansk People’s Republic (LNR), Leonid Pasechnik, on June 3.[38] ISW previously reported that officials in occupied Mariupol and St. Petersburg signed a similar pact on June 1.[39] The Kremlin also opened a United Russia Party “humanitarian headquarters” in Popasna and sent representatives of the Russian Investigative Committee to Rubizhne.[40]