Russian forces retreated from the Snake Island on June 30 following a Ukrainian missile and artillery campaign. The Russian Defense Ministry spun the retreat as “a step of goodwill.”[1] The Russian Defense Ministry claimed that the Kremlin does not interfere with United Nations (UN) efforts to organize a humanitarian corridor for agricultural export from Ukraine but did not acknowledge the Ukrainian artillery and missile campaign that had actually caused the retreat. The Ukrainian Southern Operational Command had announced elements of that campaign on June 21.[2] The Russian Defense Ministry has claimed that Russian forces defeated all Ukrainian drone and missile attacks leading up to their retreat despite considerable evidence to the contrary.[3] The Russian defeat on the Snake Island will alleviate some pressure off the Ukrainian coast by removing Russian air defense and anti-ship missile systems from the island. The retreat itself will not end the sea blockade, however, as Russian forces have access to land-based anti-ship systems in Crimea and western Kherson Oblast that can still target Ukrainian cargo as well as the use of the remaining ships of the Black Sea Fleet.

Russian authorities continue to galvanize the support of proxy actors in order to support force generation efforts. Chechen leader Ramzan Kadyrov announced on June 29 that another Akhmat special battalion, the Vostok (east)-Akhmat battalion, has been successfully formed and will shortly move to its point of permanent deployment and begin active service.[6] As ISW reported on June 28, Kadyrov stated he intends to form four new Akhmat special operations battalions and announced the formation of the Zapad (west)-Akhmat battalion early this week.[7] 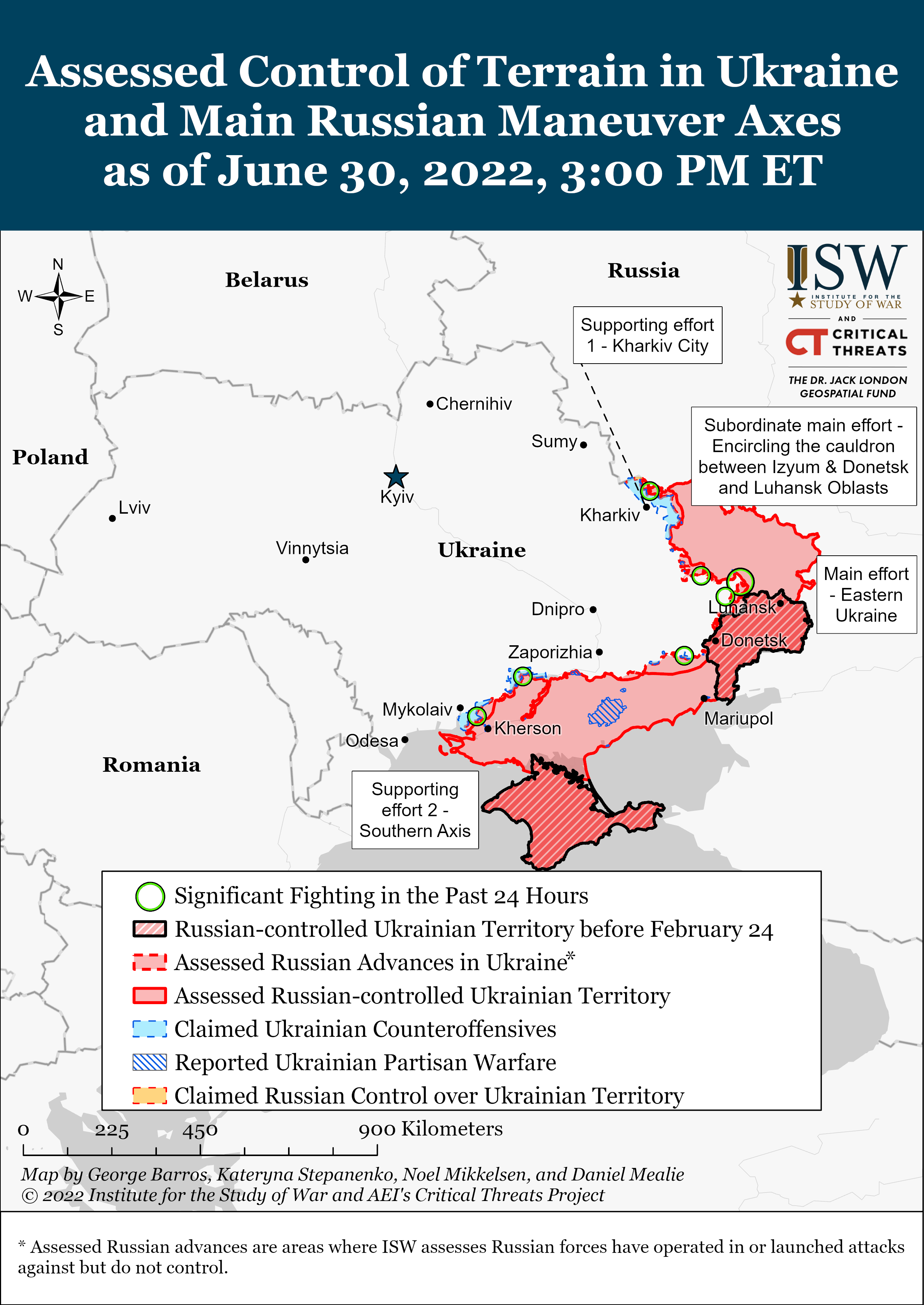 Russian forces made limited gains within the Lysychansk Oil Refinery and continued offensive operations on and around Lysychansk on June 30.[8] The Ukrainian General Staff reported that Russian forces had “partial success” on the territory of the Lysychansk Oil Refinery and control the northwestern and southeastern portions of the refinery.[9] Geolocated footage posted by Russian outlet RIA Novosti showed Russian and proxy forces of the Luhansk People’s Republic (LNR) within the plant.[10] Russian troops are likely trying to drive through the northeastern corner of the refinery in order to advance into Lysychansk proper from the refinery.[11] Head of the Chechen Republic Ramzan Kadyrov also claimed that Chechen Akhmat Special Forces and the 2nd Corps of the LNR advanced towards Lysychansk from the northwest and crossed the Siverskyi Donetsk river around Kreminna and Stara Krasnyanka, both within 10km northwest of Lysychansk.[12] Kadyrov claimed that Russian and proxy forces control half of Privillya, and will continue efforts to advance on Lysychansk through Novodruzhesk from these positions in the northwest.[13] 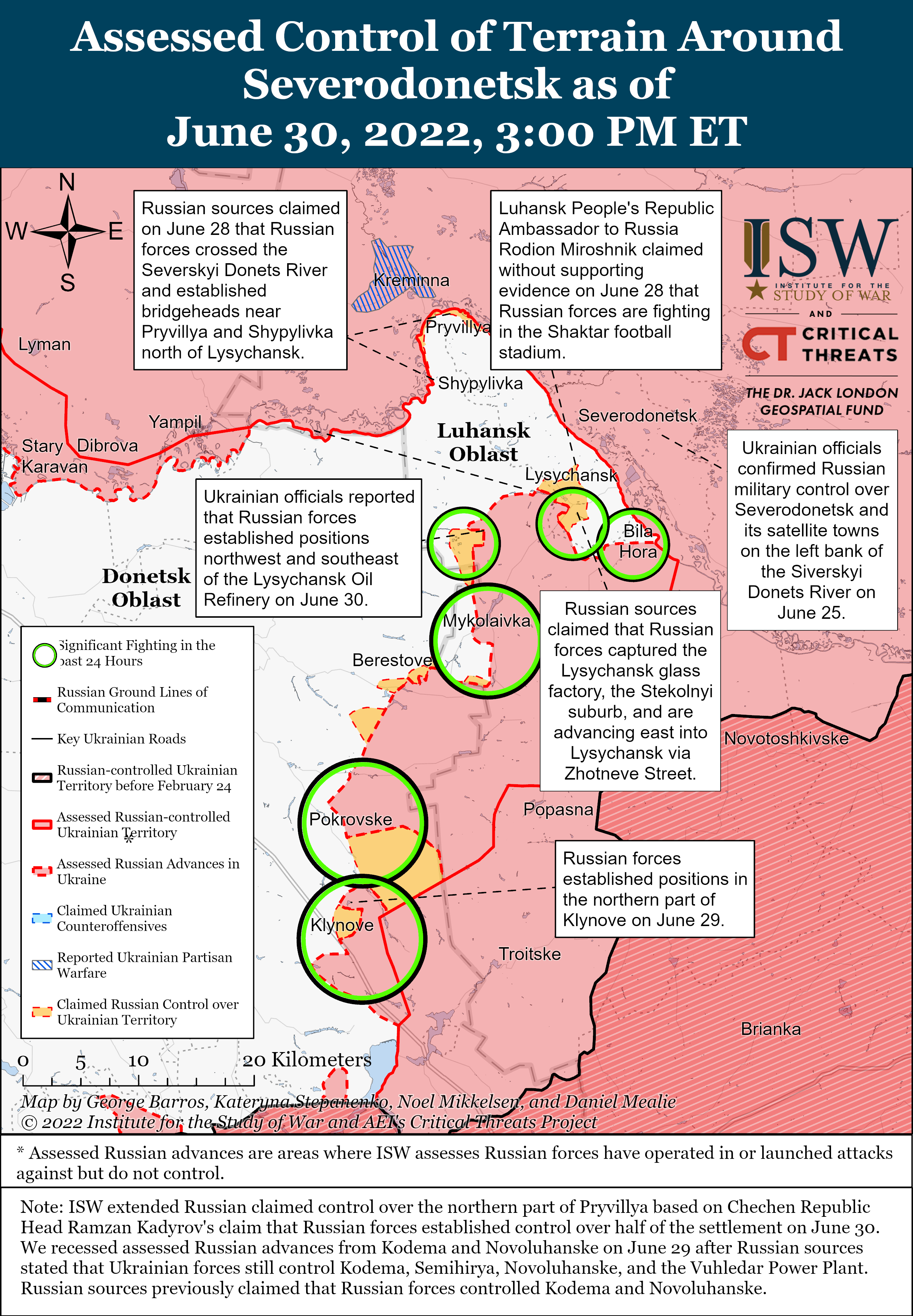 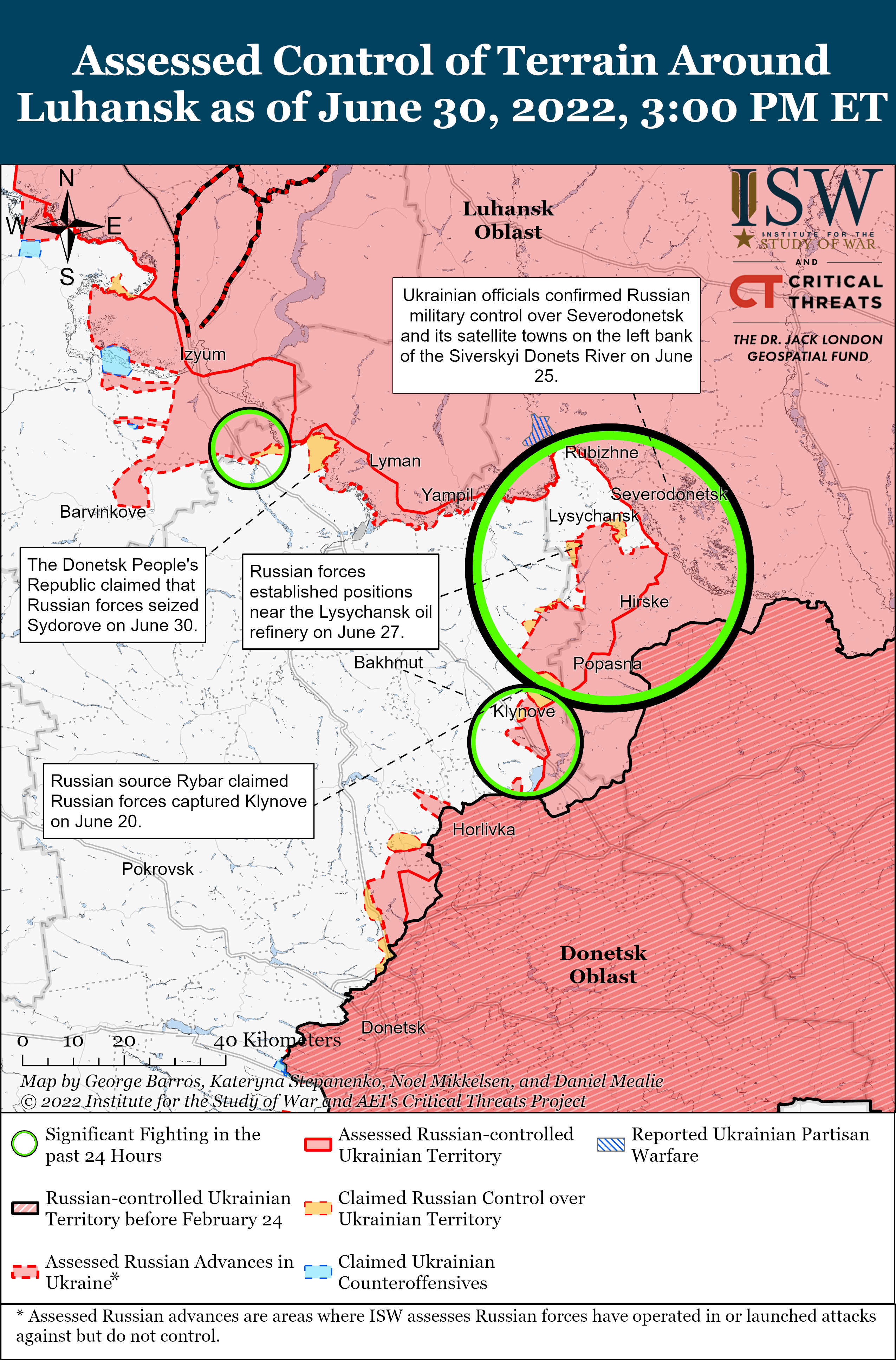 Russian forces continued attempts to advance southeast towards Slovyansk from the Kharkiv-Donetsk Oblast border on June 30.[19] The Ukrainian General Staff reported that Russian forces unsuccessfully attempted to advance from Dovhenke to Mazanivka, which as ISW has previously assessed is a likely attempt to drive on Slovyansk from the west side of a series of reservoirs that run parallel to the E40 highway.[20] Russian forces additionally fought in Bohorodychne and Krasnopillya, both northwest of Slovyansk along the E40 highway.[21] Russian forces conducted an airstrike on Tetyanivka, 20km directly north of Slovyansk, and targeted civilian infrastructure in Slovyansk itself in order to set conditions for further offensive drives on Slovyansk.[22] 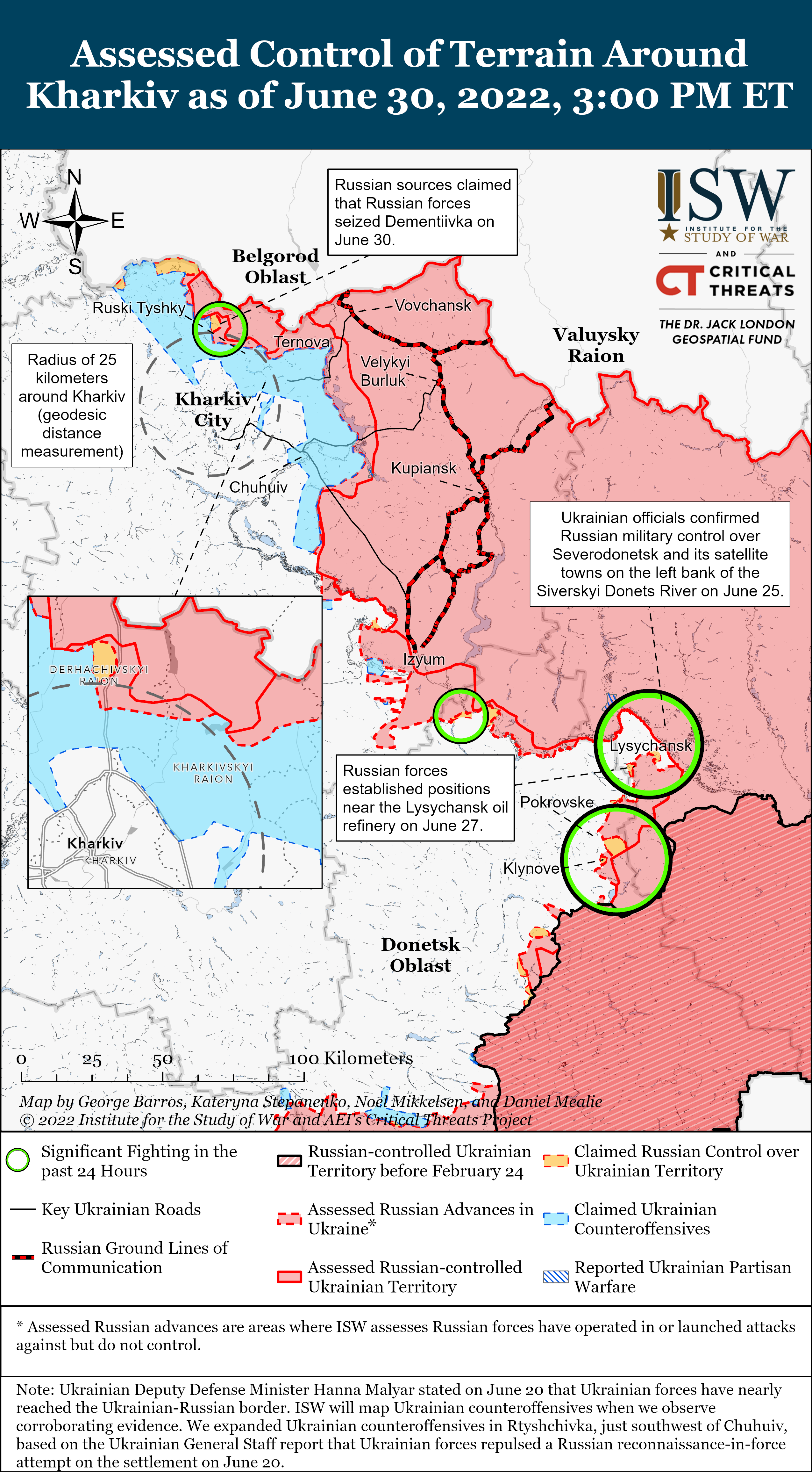 Russian forces continued to prioritize defensive operations along the Southern Axis on June 30.[28] Ukraine’s Southern Operational Command stated that Ukrainian forces have reestablished control over Potemkyne (northwestern Kherson Oblast) and that Ukrainian troops are continuing to gradually advance and place pressure on Russian forces to maintain defensive lines.[29] The Russian grouping in Zaporizhia similarly focused on defensive operations and fired on Ukrainian positions along the frontline in Zaporizhia.[30] Russian forces conducted a series of missile, artillery, and airstrikes across Mykolaiv, Dnipropetrovsk, and Odesa Oblasts.[31] The Russian Ministry of Defense claimed that the Russian grouping on Snake Island withdrew on June 30 as a gesture of ”goodwill” to the international community.[32]

The Ukrainian Main Intelligence Directorate (GUR) reported that Russian forces are conducting a wide-scale “agitation” to recruit men willing to sign military contracts in Transnistria.[33] The GUR stated that Russian actors are disseminating information on signing military contracts through Transnistrian media, mail brochures, and advertising in public spaces, as well as in meetings held with employees of industrial and agricultural enterprises.[34] Russian authorities likely hope to leverage pro-Russian sentiment in Transnistria to support “covert mobilization” efforts. 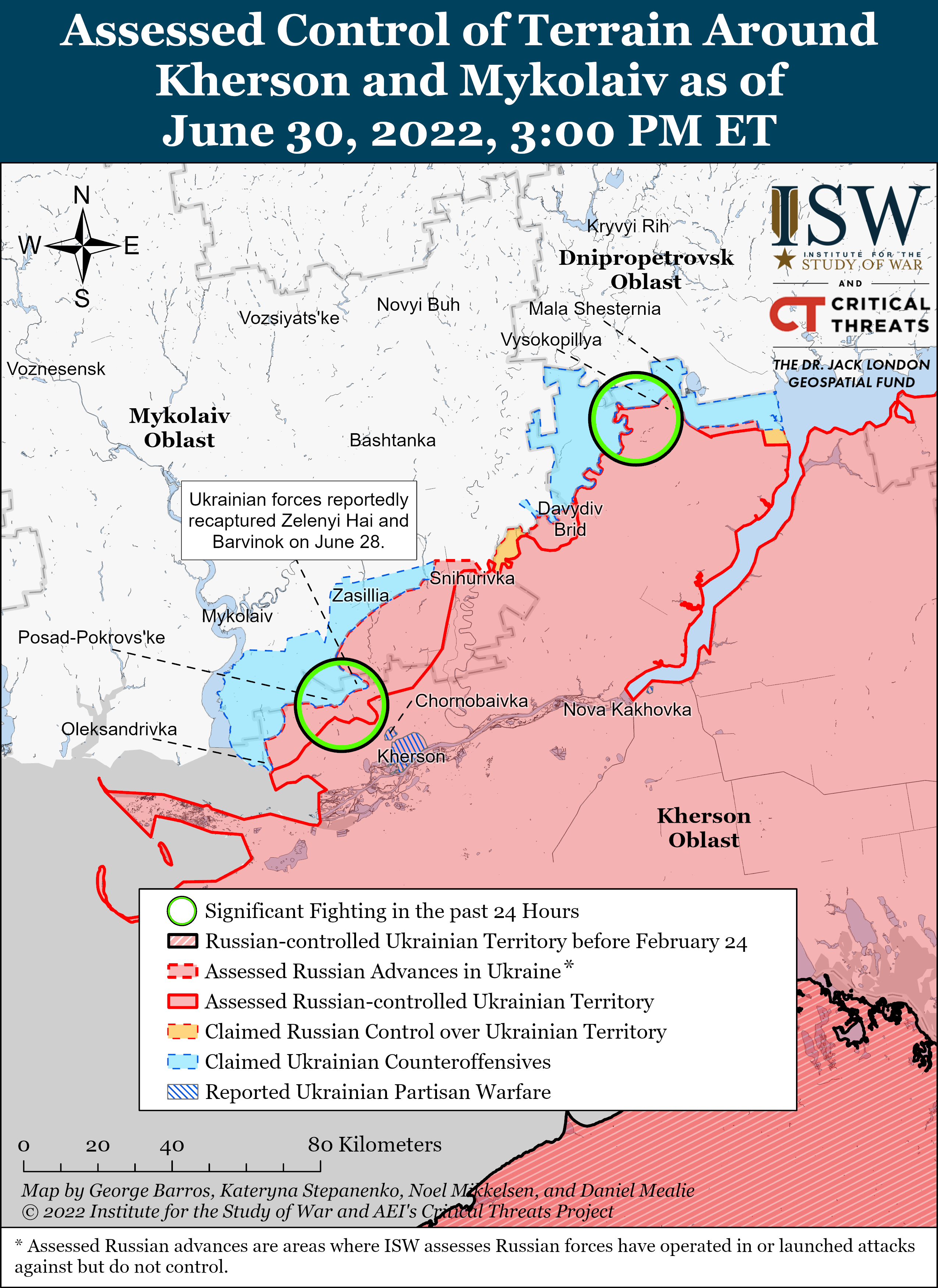