Ukrainian forces have defeated the initial Russian campaign of this war. That campaign aimed to conduct airborne and mechanized operations to seize Kyiv, Kharkiv, Odesa, and other major Ukrainian cities to force a change of government in Ukraine. That campaign has culminated. Russian forces continue to make limited advances in some parts of the theater but are very unlikely to be able to seize their objectives in this way. The doctrinally sound Russian response to this situation would be to end this campaign, accept a possibly lengthy operational pause, develop the plan for a new campaign, build up resources for that new campaign, and launch it when the resources and other conditions are ready. The Russian military has not yet adopted this approach. It is instead continuing to feed small collections of reinforcements into an ongoing effort to keep the current campaign alive. We assess that that effort will fail.

The ultimate fall of Mariupol is increasingly unlikely to free up enough Russian combat power to change the outcome of the initial campaign dramatically. Russian forces concentrated considerable combat power around Mariupol drawn from the 8th Combined Arms Army to the east and from the group of Russian forces in Crimea to the west. Had the Russians taken Mariupol quickly or with relatively few losses they would likely have been able to move enough combat power west toward Zaporizhiya and Dnipro to threaten those cities. The protracted siege of Mariupol is seriously weakening Russian forces on that axis, however. The confirmed death of the commander of the Russian 150th Motorized Rifle Division likely indicates the scale of the damage Ukrainian defenders are inflicting on those formations. The block-by-block fighting in Mariupol itself is costing the Russian military time, initiative, and combat power. If and when Mariupol ultimately falls the Russian forces now besieging it may not be strong enough to change the course of the campaign dramatically by attacking to the west.

Russian forces in the south appear to be focusing on a drive toward Kryvyi Rih, presumably to isolate and then take Zaporizhiya and Dnipro from the west but are unlikely to secure any of those cities in the coming weeks if at all. Kryvyi Rih is a city of more than 600,000 and heavily fortified according to the head of its military administration. Zaporizhiya and Dnipro are also large. The Russian military has been struggling to take Mariupol, smaller than any of them, since the start of the war with more combat power than it is currently pushing toward Kryvyi Rih. The Russian advance on that axis is thus likely to bog down as all other Russian advances on major cities have done.

The Russian military continues to commit small groups of reinforcements to localized fighting rather than concentrating them to launch new large-scale operations. Russia continues to commit units drawn from its naval infantry from all fleets, likely because those units are relatively more combat-ready than rank-and-file Russian regiments and brigades. The naval infantry belonging to the Black Sea Fleet is likely the largest single pool of ready reserve forces the Russian military has not yet committed. Much of that naval infantry has likely been embarked on amphibious landing ships off the Odesa coast since early in the war, presumably ready to land near Odesa as soon as Russian forces from Crimea secured a reliable ground line of communication (GLOC) from Crimea to Odesa. The likelihood that Russian forces from Crimea will establish such a GLOC in the near future is becoming remote, however, and the Russian military has apparently begun using elements of the Black Sea Fleet naval infantry to reinforce efforts to take Mariupol.

The culmination of the initial Russian campaign is creating conditions of stalemate throughout most of Ukraine. Russian forces are digging in around the periphery of Kyiv and elsewhere, attempting to consolidate political control over areas they currently occupy, resupplying and attempting to reinforce units in static positions, and generally beginning to set conditions to hold in approximately their current forward positions for an indefinite time. Maxar imagery of Russian forces digging trenches and revetments in Kyiv Oblast over the past several days supports this assessment.[1] Comments by Duma members about forcing Ukraine to surrender by exhaustion in May could reflect a revised Russian approach to ending this conflict on terms favorable to Moscow.

Stalemate will likely be very violent and bloody, especially if it protracts. Stalemate is not armistice or ceasefire. It is a condition in war in which each side conducts offensive operations that do not fundamentally alter the situation. Those operations can be very damaging and cause enormous casualties. The World War I battles of the Somme, Verdun, and Passchendaele were all fought in conditions of stalemate and did not break the stalemate. If the war in Ukraine settles into a stalemate condition Russian forces will continue to bomb and bombard Ukrainian cities, devastating them and killing civilians, even as Ukrainian forces impose losses on Russian attackers and conduct counter-attacks of their own. The Russians could hope to break Ukrainians’ will to continue fighting under such circumstances by demonstrating Kyiv’s inability to expel Russian forces or stop their attacks even if the Russians are demonstrably unable to take Ukraine’s cities. Ukraine’s defeat of the initial Russian campaign may therefore set conditions for a devastating protraction of the conflict and a dangerous new period testing the resolve of Ukraine and the West. Continued and expanded Western support to Ukraine will be vital to seeing Ukraine through that new period. 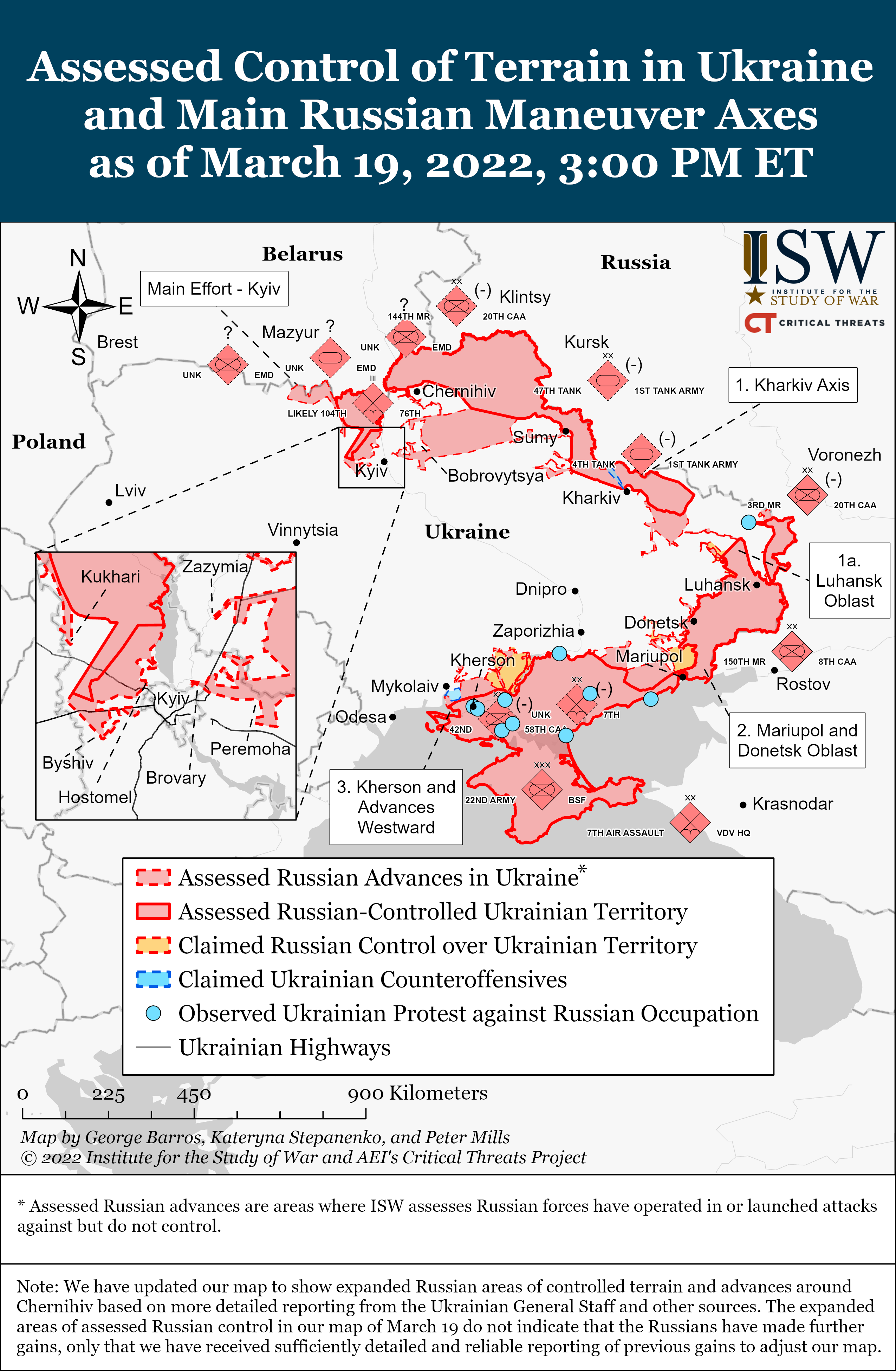 The Ukrainian General Staff continues to report Russian efforts to find and deploy reinforcements to fight in Ukraine as well as continuing problems of morale and discipline in the Russian military. The Ukrainian General Staff reported on March 19 that Russia was redeploying elements of the 40th Separate Naval Infantry Brigade and the 155th Separate Naval Infantry Brigade, both from the Eastern Military District, to “replenish the losses of the Eastern Military District group” in Belarus.[2] The Ukrainian General Staff reports that Russian soldiers are continuing to desert and refuse orders.[3] The General Staff renewed warnings on March 19 that the Russians might use false flag attacks or other staged provocations to justify further conscription and mobilization in Russia.[4] Such actions would not generate additional usable combat power for many months. The Russian military might even struggle to train new conscripts to standard given losses, including those sustained by the 437th Training Regiment as reported in our previous update.[5]

The Russian military is increasing its aerial, missile, and artillery bombardment of populated Ukrainian areas as its conventional mechanized advances culminate.[6] Russia announced the use of its Kinzhal hypersonic missile to strike an ammunition depot in Ivano-Frankivsk on March 18.[7] The use of such an expensive, rare, and high-end system to hit an ammunition depot was likely signaling and demonstrating intent and capability to escalate rather than seeking to achieve a concrete military objective. The Kinzhal is a dual-use missile that can carry a nuclear payload, although the one used in Ukraine bore a conventional high-explosive payload.[8] Its use likely signaled Moscow’s willingness to consider using low-yield nuclear weapons in addition to demonstrating the capability to use hypersonic weapons. 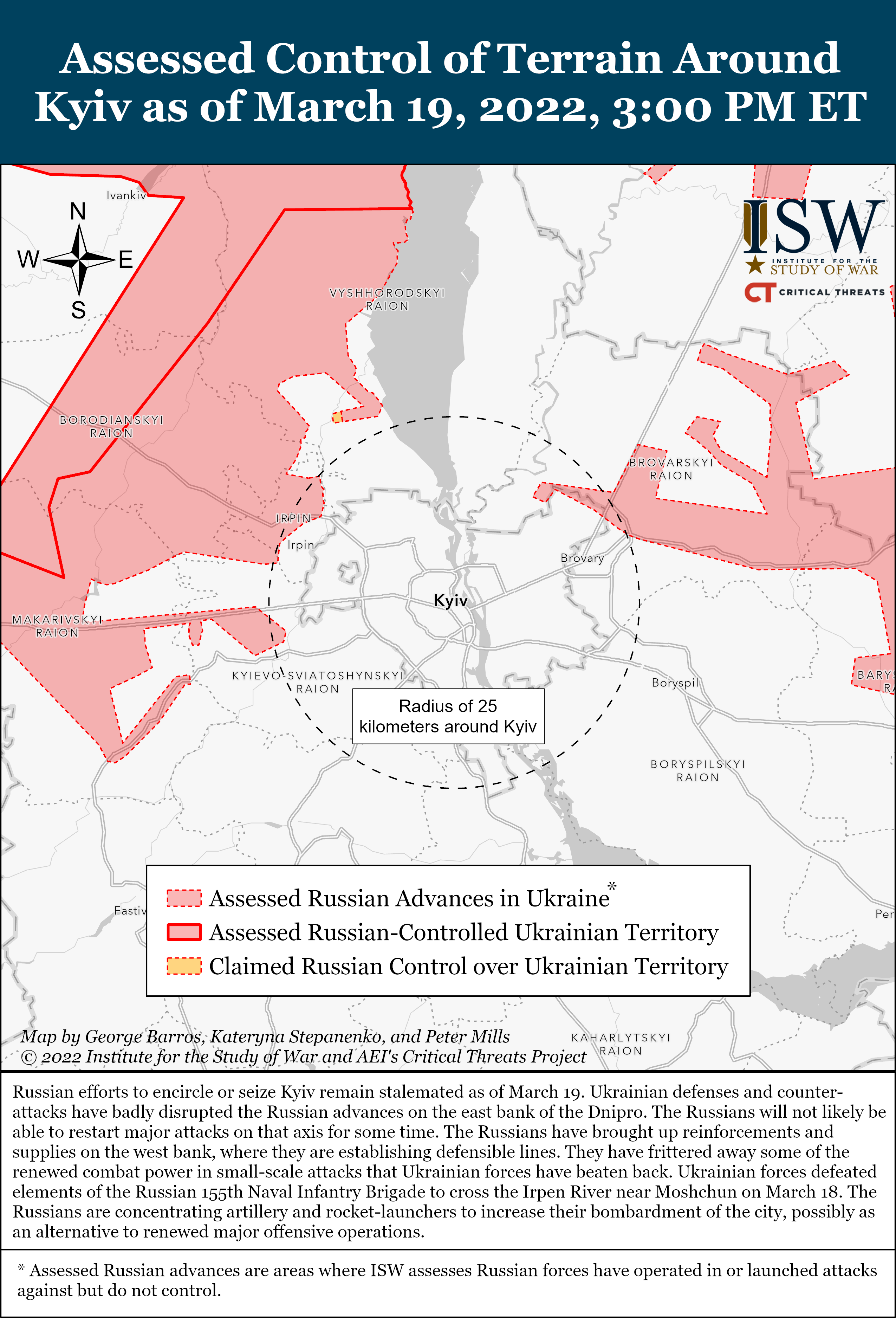 The Russians have likely abandoned plans to encircle Kyiv from the west or to assault to seize the city from the west in the coming weeks. They are instead likely seeking to set conditions for an expanded artillery and missile bombardment of the city by moving into effective artillery range of its center.

Russian forces remained in a defensive posture to the west and northwest of Kyiv. Satellite imagery provided by Maxar Technologies shows Russian armored vehicles dug into defensive revetments near Antonov Airfield as of March 17. 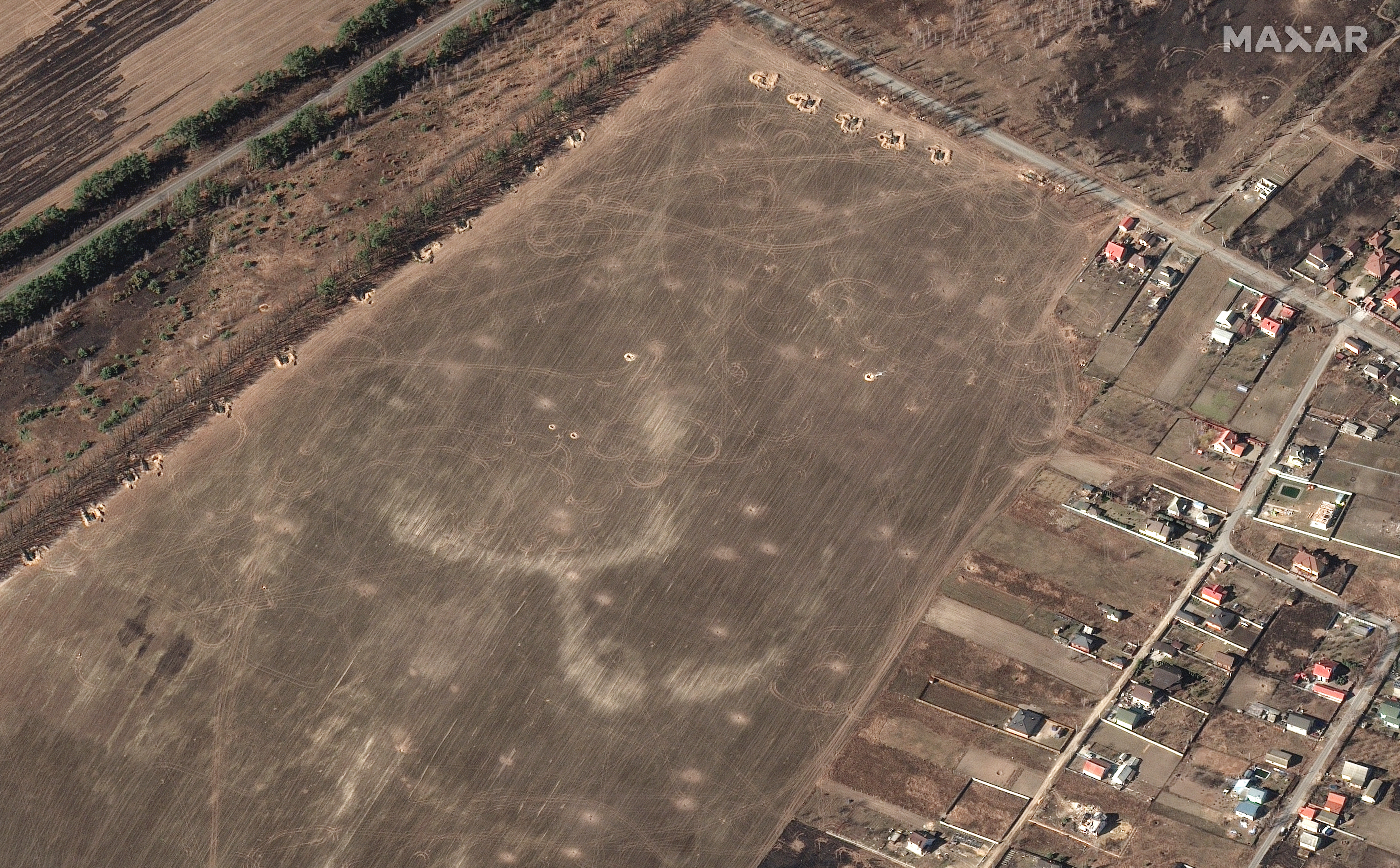 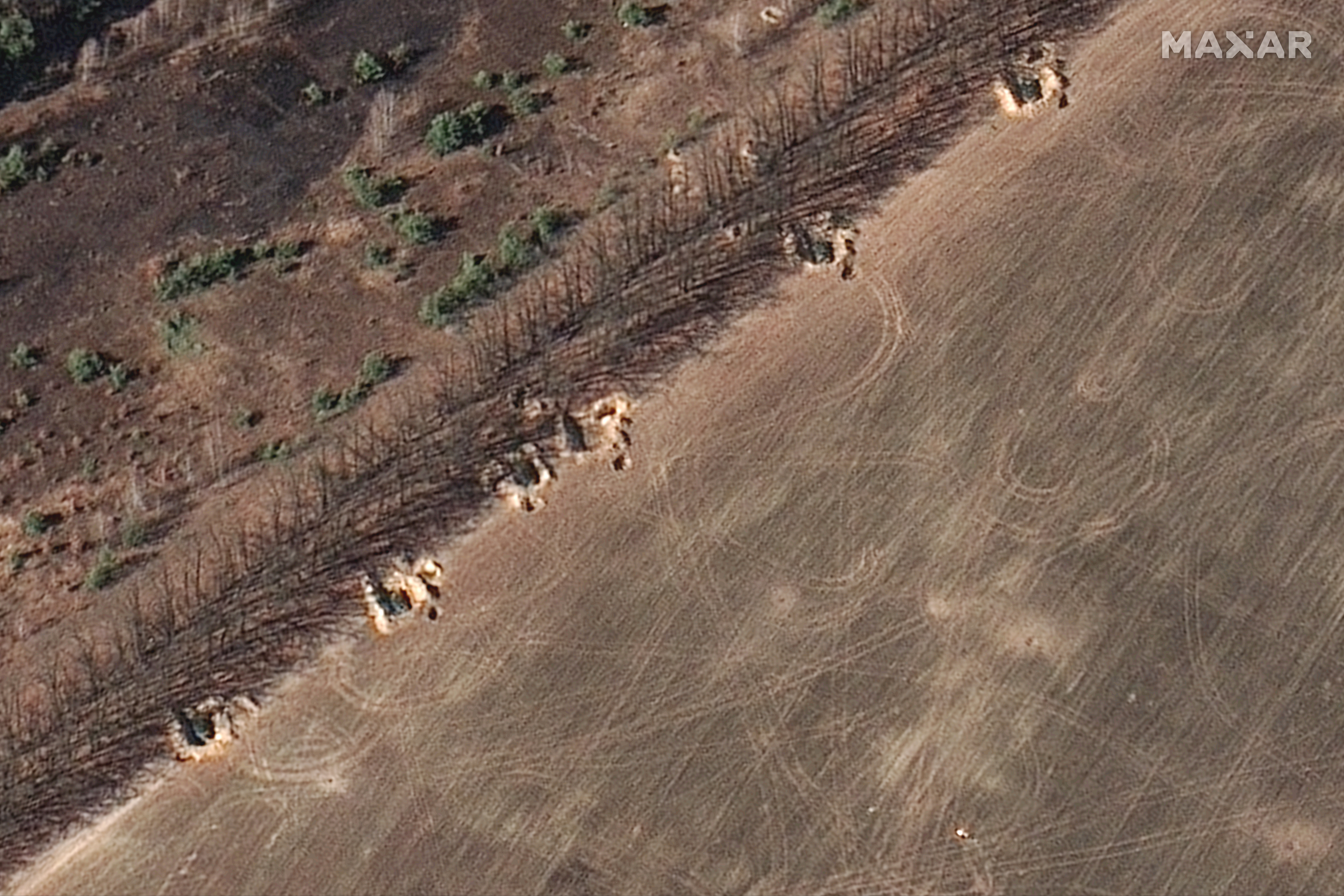 Russian 152 millimeter self-propelled howitzers have a maximum range of close to 25 kilometers.[9] Russian forces are within that distance of Kyiv’s center in some places, but consolidated Russian positions around Antonov Airfield, for example, are outside the optimal range ring for targeting central Kyiv. The Russians reportedly attempted to cross the Irpin River and seize the town of Mochun, just inside this range-ring, on March 18 but were defeated.[10] The suburb of Brovary on the eastern bank of the Dnipro is within range, a fact that may help explain the Russians’ tenacity in trying to secure their positions in that location.

There were no significant changes to the situation on this axis in the past 24 hours. We have updated our map to show expanded Russian areas of controlled terrain based on more detailed reporting from the Ukrainian General Staff and other sources. The expanded areas of assessed Russian control in our map of March 19 DO NOT INDICATE THAT THE RUSSIANS HAVE MADE FURTHER GAINS, ONLY THAT WE HAVE RECEIVED SUFFICIENTLY DETAILED AND RELIABLE REPORTING OF PREVIOUS GAINS TO ADJUST OUR MAP. The Ukrainian General Staff reported on March 18 that up to three Russian brigades remained in defensive positions around Chernihiv city.[11] The Ukrainian General Staff also noted that roughly three Russian brigades remain in positions in the eastern suburbs of Kyiv on March 18 but had taken no significant actions in the past 24 hours.[12]

Russian forces, mainly drawn from the 6th Combined Arms Army and the Northern Fleet, did not engage in notable activity around Kharkiv City on March 19.[13] The Ukrainian General Staff reported on March 18 that the Russians were reinforcing their positions near the city with two elements of the 6th Combined Arms Army and the 1st Guards Tank Army.[14] The General Staff reports that Russian forces continue to press Sumy and Izyum and warns that they are preparing a renewed drive from Kharkiv west toward Kyiv and Poltava, among other locations at some unspecified time.[15] 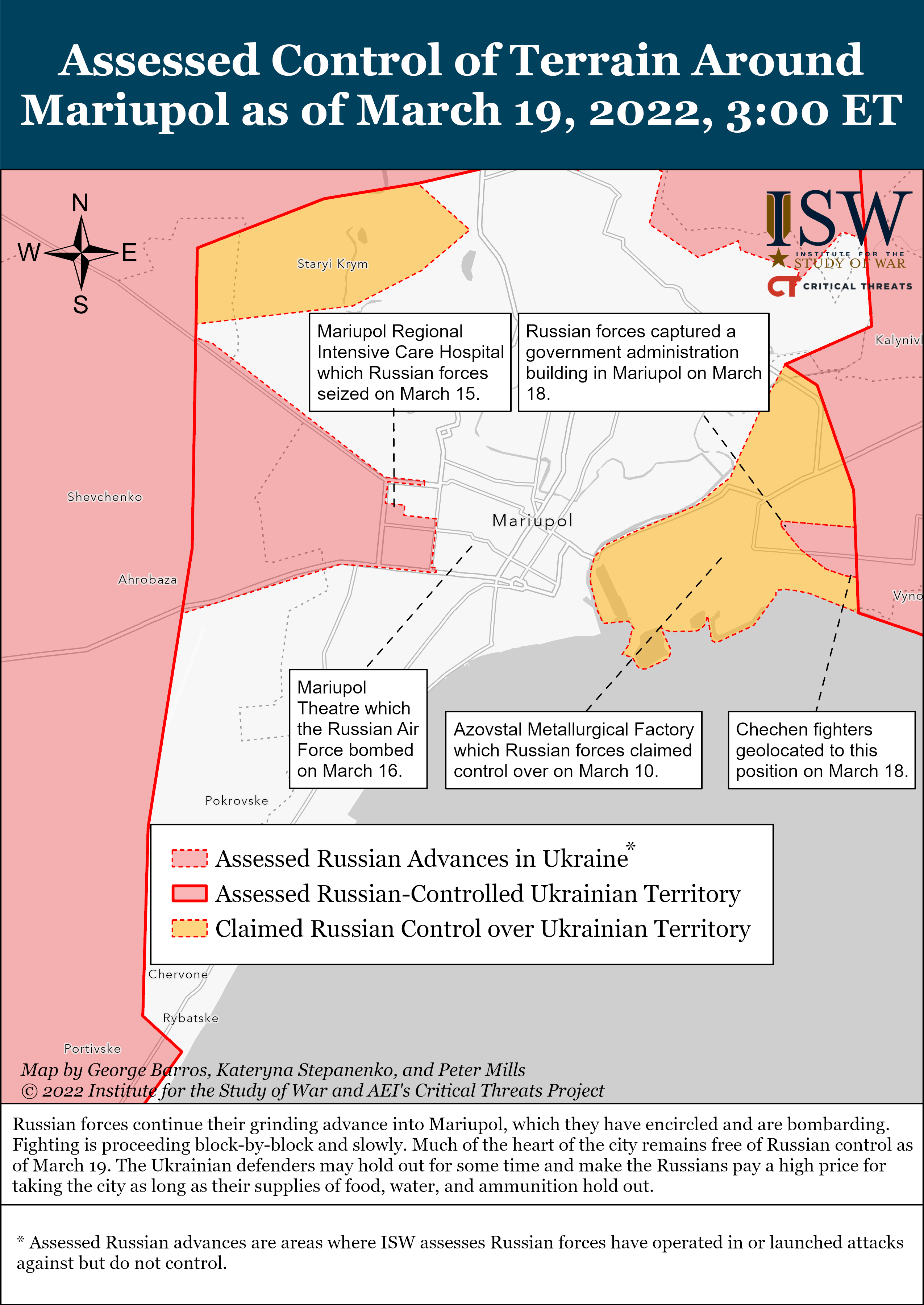 Russian forces continued their grinding block-by-block advance into Mariupol on March 19, although without apparently making much new progress.[18] The Russians continue to attack civilian targets with air, missile, artillery, and even tank main gun rounds.[19]

Russian forces appear to have abandoned efforts to cross the Southern Bug and establish a ground line of communication toward Odesa for the time being. The Ukrainian General Staff reports that Russian troops near Mykolayiv focused on establishing logistics systems but did not conduct major offensive operations on March 19.[20] Russian forces have instead continued their advance toward Kryvyi Rih, hometown of Ukrainian President Volodymyr Zelensky, about 130 kilometers west of Zaporizhiya.[21] The head of Kryvyi Rih’s military administration described the situation and recent Russian efforts to advance on the city on March 19.[22] Russian forces attempted to land an aircraft at the city’s airport, he reported, but failed. They then began advancing with armored columns of 10-20 vehicles each (likely the mechanized companies of a one or more battalion tactical groups). They have since formed an extended front line that they are fortifying, he said.