Russian forces resumed offensive operations in support of their envelopment of Kyiv on March 2 but made few territorial advances. Russian forces resumed offensive operations on both axes of advance toward Kyiv after largely pausing for 72 hours to reinforce and resupply their troops north and west of Kyiv. Russian operations to envelop Kyiv are Moscow’s main effort. Russian troops are also undertaking three supporting efforts, one to seize Kharkiv, one to take Mariupol and secure the “land bridge” connecting Rostov-on-Don to Crimea, and one to secure Kherson and set conditions for a drive west toward Mykolayiv and Odesa. The three supporting operations were active in the last 24 hours; Russian forces likely captured Kherson and began a bombardment of critical civilian infrastructure in Mariupol in a likely effort to force the city to surrender while making few territorial gains in Kharkiv.

The Russian attack on Kyiv likely consists of a main effort aimed at enveloping and ultimately encircling the city from the west and a supporting effort along the axes from Chernihiv and Sumy to encircle it from the east. The long Russian column of combat and logistics vehicles observed north of Kyiv in the last 48 hours is likely now supporting attacks directly into the city from positions Russian forces maintain in Kyiv’s northwestern outskirts. However, Russian forces are more likely to prioritize the envelopment/encirclement in the coming days, rather than a direct assault into the city.

Russian forces resumed frontal assaults on Kharkiv on March 2 and continued using area-attack weapons, dramatically increasing the damage to civilian infrastructure and civilian casualties. Russian ground forces appear to be conducting another frontal assault on Kharkiv from the northeast rather than enveloping the city and will likely face protracted Ukrainian resistance.

Russian forces in the south likely secured Kherson, began bombarding civilian infrastructure in Mariupol in a likely attempt to force the city to surrender without a direct assault, and appear to be holding their positions south of Zaporizhya. Russian forces will likely resume offensive operations towards Mikolayiv in the next 24 hours but do not appear to pose an imminent danger to Odesa. Russian forces likely seek to force Mariupol to capitulate by destroying critical civilian infrastructure and killing civilians to create a humanitarian catastrophe – an approach Russian forces have repeatedly taken in Syria.[1] A Russian drive north through or near Zaprozhya to cut off Ukrainian forces fighting along the line of contact appears very unlikely in the next 24-72 hours.

Russian forces are receiving needed supplies and reinforcements that may facilitate much more rapid and effective operations in the coming 24-72 hours. The Russian effort around Kyiv remains poorly organized, however, with elements of many different battalions combined into what seem to be ad hoc groupings rather than operating under standing regiment or brigade headquarters. The initial errors in the Russian force composition and organization in Belarus and western Russia that ISW has previously reported on, which contributed to Russian logistical and operational failures around Kyiv, will be difficult to remedy quickly and will likely continue to cause friction and reduce the effectiveness of Russian operations even as supply issues are addressed and reinforcements come into the fight.[2] It remains too early to evaluate the likely effective combat power the added Russian troops will bring. 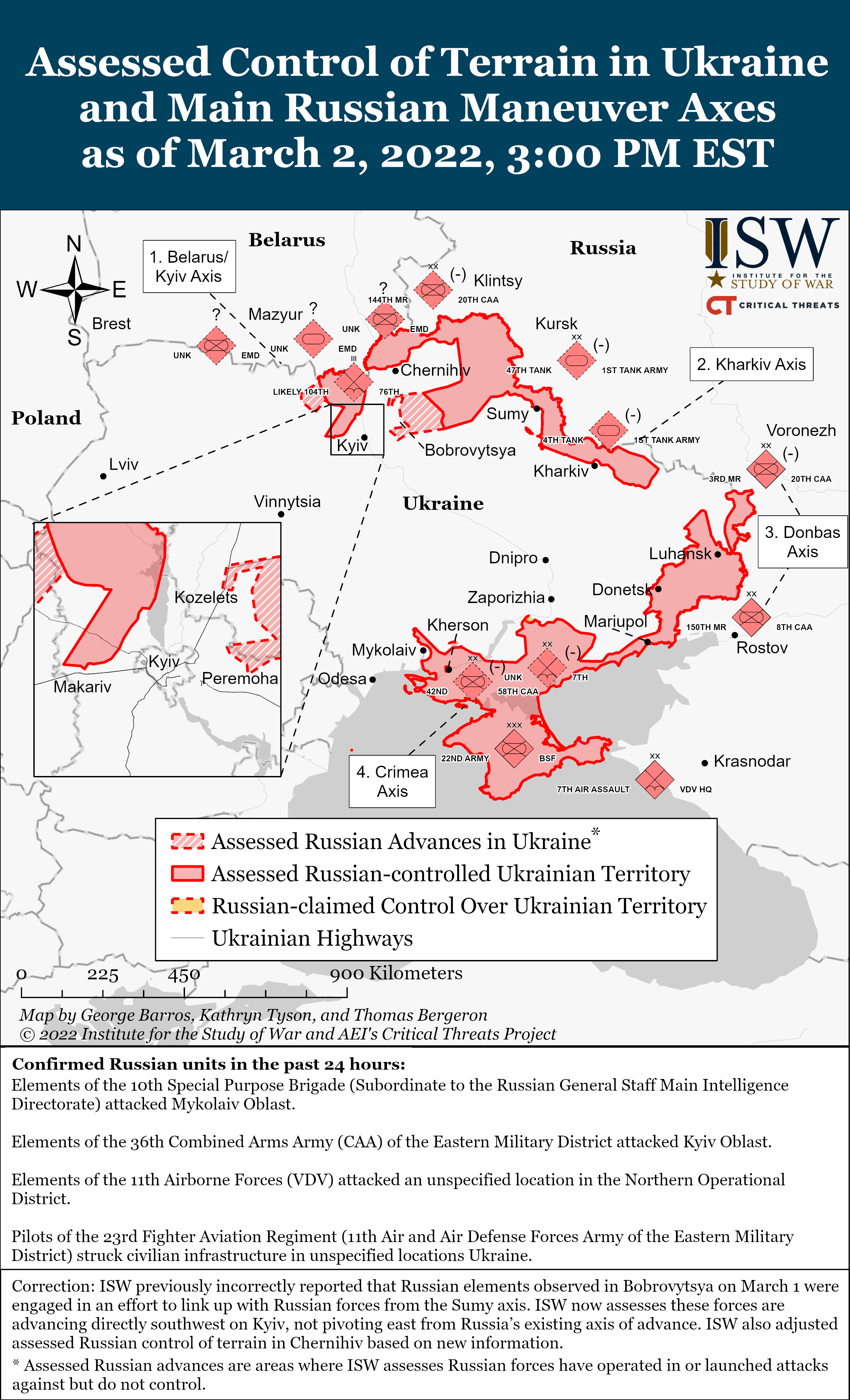 Main effort—Kyiv axis: Russian forces resumed offensive operations against Kyiv’s western outskirts on March 2 but failed to secure any additional territory.[3] Russian forces additionally launched offensive operations in Zhytomyr Oblast, expanding their envelopment of Kyiv deeper west than ISW previously assessed, likely to outflank stronger-than-anticipated Ukrainian resistance and limited Ukrainian counterattacks in Kyiv’s outskirts. Russian forces additionally successfully renewed advances toward Kyiv along the Chernihiv axis on March 2. Russian operations on the Kyiv axis consist of a main effort aimed at enveloping and ultimately encircling the city from the west and supporting efforts along the Chernihiv and Sumy axes to encircle it from the northeast and east.

Subordinate Main Effort along The West Bank of The Dnipro

Supporting Effort #1—Kharkiv: Russian forces resumed assaults on central Kharkiv and continued to heavily bombard the city on March 2. Local Ukrainian authorities reported repelling a Russian assault on the Kharkiv Military Medical Center, near the city center, as of 6:00 pm local time on March 2.[19] Early reports of a Russian airborne landing in the city were likely incorrect. Russian forces continued to deliberately target civilian infrastructure in Kharkiv with MLRS systems, tube artillery, cluster munitions, and Kalibr cruise missiles on March 2, inflicting numerous civilian casualties.[20] The Russian air, artillery, and missile barrage may also be intended to generate panic and reduce the morale of Ukrainian defenders in Kharkiv and elsewhere. It is not likely to achieve that effect. It is too early to evaluate the likelihood that a renewed Russian ground offensive will succeed in taking the city.

Ukrainian forces separately claimed to have launched two separate counterattacks in Donbas that ISW cannot confirm at this time. A Ukrainian Presidential representative stated on March 2 that Ukrainian forces plan to retake Horlivka in Donetsk Oblast, describing it as Ukraine’s first offensive operation “in a different direction” since the war began.[23] The Ukrainian 95th Airborne Brigade assaulted Horlivka on March 1 but has failed to secure it as of 7:00 pm local time on March 2. The Ukrainian 93rd Separate Mechanized Brigade separately claimed to have pushed Russian forces ”back to the Russian border” at an unspecified location on March 1, stating it would later provide pictures and details.[24] ISW cannot confirm this advance as of publication.

Supporting Effort #3—Kherson and West: Russian forces continued to reduce pockets of Ukrainian resistance in Kherson on March 2 and will likely secure the city in the next 24 hours if they have not done so already. A Ukrainian Ministry of Defense Spokesperson stated Ukrainian forces retain control of portions of Kherson city as of 11:00 am local time on March 2.[25] Multiple sources reported elements likely of the 7th Airborne Division and SPETSNAZ units throughout Kherson City on March 1, including a VDV assault on the city SBU building, and Ukrainian forces will likely lose control over the city within the next 24 hours.[26]