Russia is withdrawing some elements of its forces around Kyiv into Belarus for likely redeployment to other axes of advance and did not conduct any offensive operations around the city in the past 24 hours, but Russian forces will likely continue to hold their forwardmost positions and shell Ukrainian forces and residential areas. Ukrainian forces repelled several Russian attacks in Donetsk and Luhansk oblasts in the past 24 hours and Russian forces likely continued to take territory in Mariupol. Russian forces held their positions and did not conduct offensive operations throughout the rest of the country. Russian forces will likely capture Mariupol in the coming days but likely suffered high casualties taking the city, and Russian force generation efforts and the redeployment of damaged units from the Kyiv axis are increasingly unlikely to enable Russian forces to make rapid gains in the Donbas region. 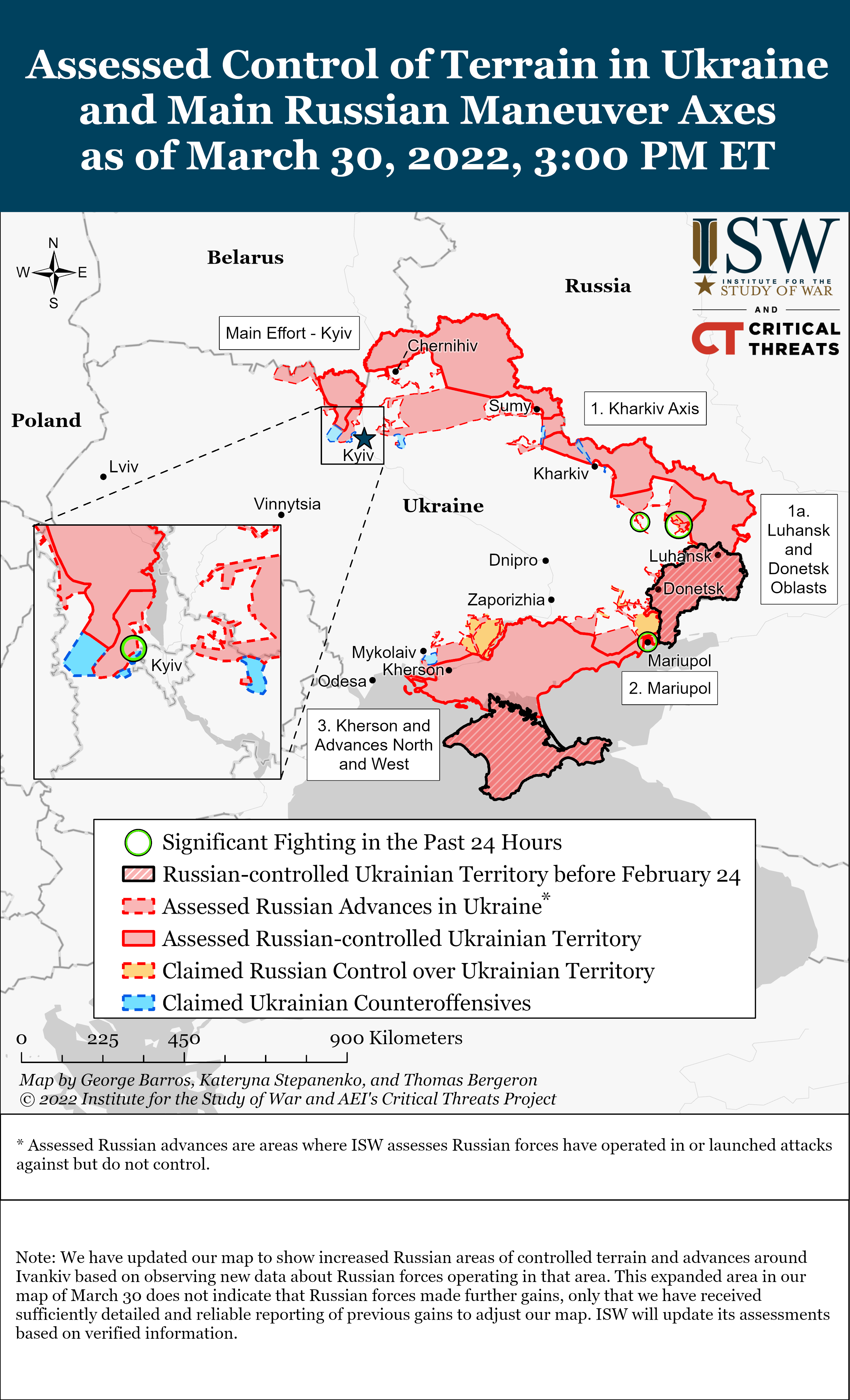 Russia is reportedly increasingly deploying support personnel and auxiliary units to replace combat losses in Ukraine. The Ukrainian General Staff reported that Russia is deploying servicemen from military support units, including educational institutions, to replace combat losses.[1] Russian officer casualties and the decision to strip Russian training units of personnel will further impede the Russian military’s ability to train new conscripts and replacements. The Ukrainian General Staff reported that three battalion tactical groups (BTGs) including up to 2,000 Russian and South Ossetian personnel from Russia’s 4th and 7th Military Bases in South Ossetia and Abkhazia, respectively, deployed to unspecified locations in Ukraine.[2] Social media users observed South Ossetian forces in the Donbas region on March 29, but ISW cannot independently confirm if the entirety of these reinforcements were deployed to Donbas.[3]

The Ukrainian General Staff additionally stated that Russia faces continuing morale and supply issues, including contract servicemen (volunteer troops, not conscripts) in the 26th Tank Regiment requesting to terminate their contracts and relocate to garrison service, and elements of the 150th Motor Rifle Division receiving inoperable equipment from military storage.[4] The Ukrainian Main Intelligence Directorate additionally claimed that Russian military procurement is “on the verge of failure” due to western sanctions and that Russia cannot produce modern weapons and equipment without foreign electronics.[5] ISW cannot independently confirm these Ukrainian intelligence reports, but they are largely consistent with previously confirmed reports of low Russian morale and equipment failures.

Main effort—Kyiv axis: Russian operations on the Kyiv axis were aimed at encircling the city from the northwest, west, and east.  It is unclear if forces on this axis have been given a new mission and, if so, what it might be.

Elements of Russian forces around Kyiv, both in the northwest and around Brovary, continued to pull back into Belarus on March 30, though Russian forces continued to defend their front lines in the area and shell civilian targets.[6] Ukrainian Interior Ministry Advisor Denisenko reported on March 30 that Russia has not decreased its military activity near Kyiv and those ongoing Russian withdrawals appear to be unit rotations, rather than a cessation of hostilities.[7] Ukraine’s National Security and Defense Council concurred that Russian forces withdrawn from Kyiv will likely be redeployed to other axes.[8] The Ukrainian General Staff reported at noon local time on March 30 that it confirmed a column of Russian forces traveled north through Ivankiv toward the Chernobyl area, though ISW cannot confirm the unit identification or size of this reported withdrawal.[9] The Kyiv Oblast administration reported that Russian forces are concentrating on shelling Ukrainian fuel storage to disrupt Ukrainian logistics and create a humanitarian crisis.[10] Russian forces around Kyiv will continue to shell the city, and forces withdrawn into Belarus will likely be deployed to other lines of advance in the coming week. 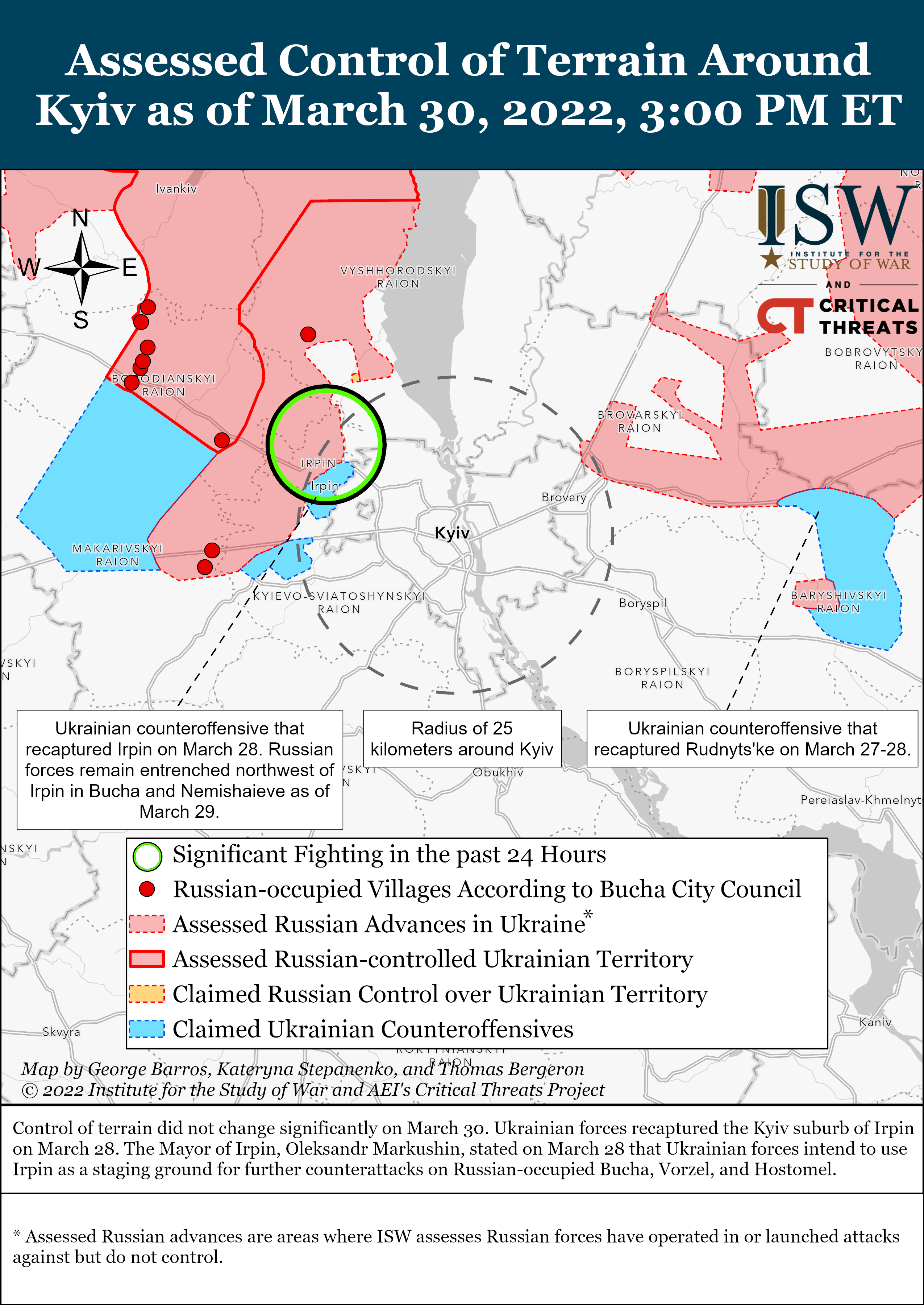 Russian forces did not conduct any major operations along the Chernihiv and Sumy axis in the past 24 hours, but Ukrainian military and civilian sources denied Russian claims to have withdrawn forces from the area.[14] Chernihiv Oblast Administration Head Vyacheslav Chaus stated on March 30 that the city has seen no evidence of Russian withdrawals around the city and reported Russian aircraft continue to strike targets in the city on the night of March 29.[15] The Chernihiv City Council Secretary separately stated on March 30 that Russian shelling increased following the Russian claim on March 29 that Russian forces would reduce operations against Chernihiv.[16] The Ukrainian General Staff reported at noon local time on March 30 that Russian forces conducted reconnaissance and continued to shell Ukrainian positions in the city.[17] ISW has not confirmed any Russian unit rotations near Chernihiv, unlike observed Russian redeployments from northwestern Kyiv.

Russian forces do not appear to have conducted significant operations in or immediately around Kharkiv in the last 24 hours and continued to shell the city.[18]

The Ukrainian General Staff reported at noon local time on March 30 that Russia is redeploying elements of the 20th Combined Arms Army and 1st Guards Tank Army from unspecified locations—likely from the Sumy region—to reinforce Russian units around Izyum.[19] Russian forces did not conduct offensive operations in Izyum or Kam'yanka, a town south of Izyum, in the past 24 hours.[20]

Ukrainian forces continued to repel Russian assaults throughout Donetsk and Luhansk Oblasts in the last 24 hours. The Ukrainian General Staff reported at 6:00 am local time on March 30 that Ukrainian forces repelled four Russian attacks in the area in the past 24 hours and destroyed seven tanks, seven armored vehicles, and two other vehicles.[21] Local Ukrainian officials in Donetsk Oblast reported Russian shelling and airstrikes continued along the entire line of contact.[22] Donetsk People’s Republic Head Denis Pushilin said on March 30 that Russian and proxy forces main task is to “reach the constitutional borders” claimed by the DNR and LNR—the entirety of their respective oblasts.[23] 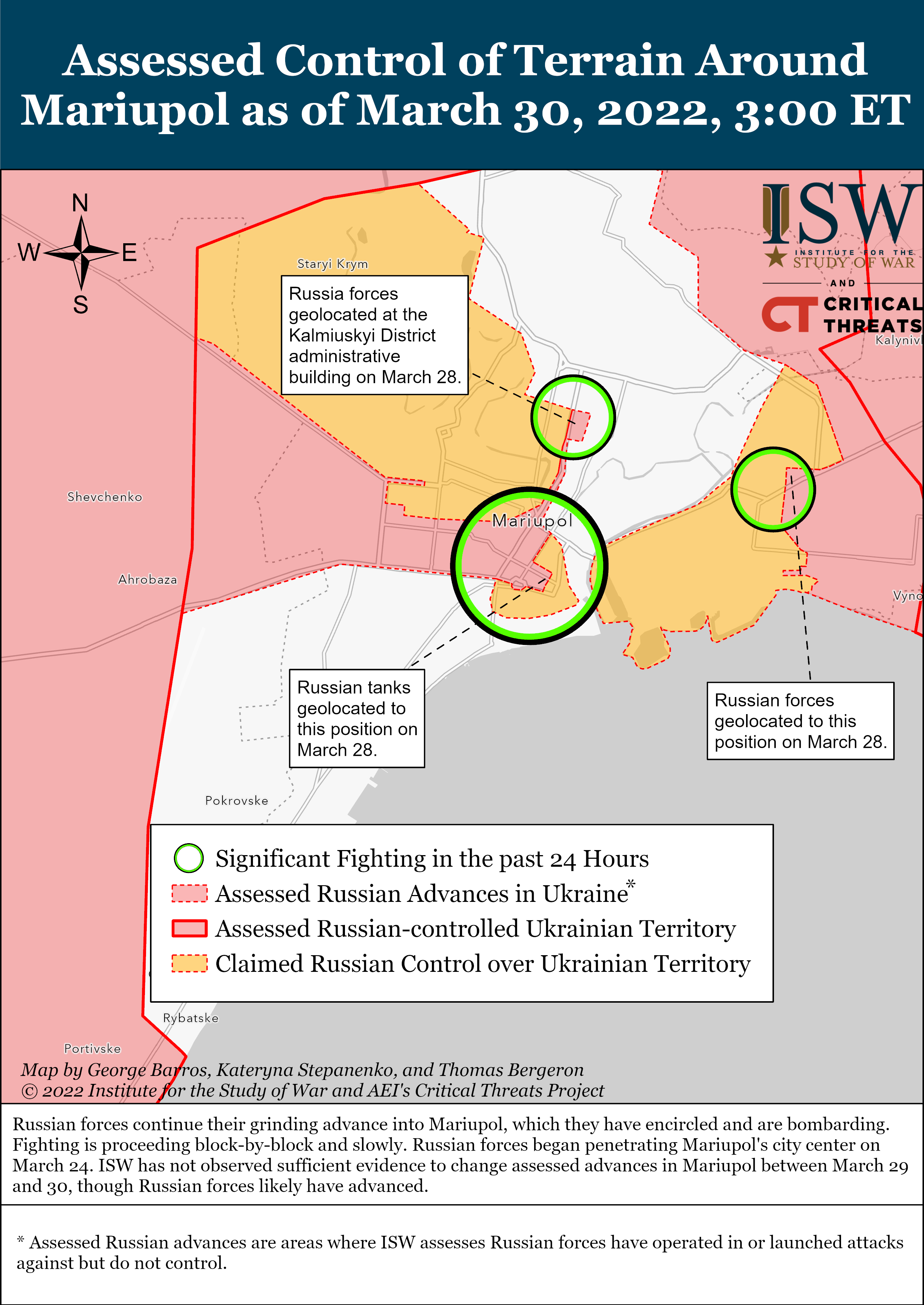 Russian forces did not conduct any offensive operations around Kherson and continued to reconstitute their forces in the southern direction in the last 24 hours.[26]