Russian efforts to redeploy damaged units from the Kyiv and Sumy axes to eastern Ukraine are unlikely to enable Russian forces to conduct major gains. Russia continued to withdraw elements of the 35th and 36th Combined Arms Armies and 76 Air Assault Division from their positions northwest of Kyiv into Belarus for refit and likely further redeployment to eastern Ukraine. However, these units are likely heavily damaged and demoralized. Feeding damaged Eastern Military District units directly into operations in eastern Ukraine—predominantly conducted by the Southern Military District—will likely prove ineffective and additionally introduce further command-and-control challenges for the Russian military. Russian forces will likely attempt to retain their current front lines around Kyiv and in northeastern Ukraine and will continue to dig in on these fronts; ISW has not seen any indicators of Russian forces fully relinquishing captured territory. However, Ukrainian counterattacks are likely disrupting Russian efforts to redeploy and refit their forces and will continue in the coming days. 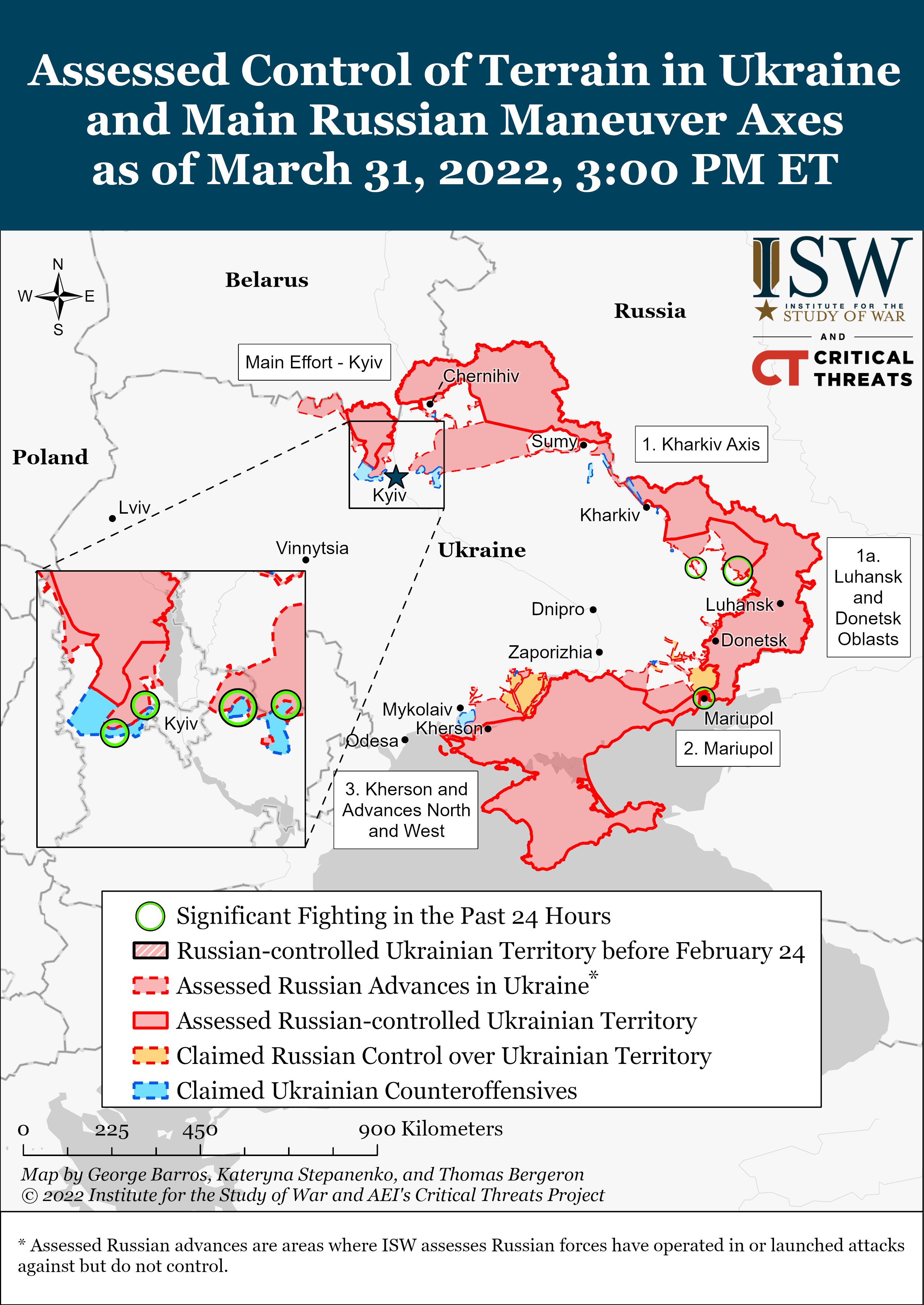 Putin signed a decree on March 31 beginning Russia’s preplanned spring draft, conscripting 134,500 Russians.[1]  Russia conducts two prescheduled drafts a year, typically running from April 1 to July 15 and October 1 to December 31.[2] The number of Russian conscripts called up is relatively consistent, including 127,000 in fall 2021 and 134,000 in Spring 2021.[3] New conscripts typically undergo one or two months of basic training followed by three to sixth months of advanced training prior to assignment to specific units, and are precluded by law from deploying to combat with less than four months of training—though the Kremlin could bypass this restriction by announcing a general mobilization.[4] Russia’s Spring 2022 draft does not as of yet appear abnormal from Russia’s typical conscription cycle, but ISW will closely monitor any developments throughout the April 1-July 15 call-up period. Newly drafted conscripts will not provide Russia additional combat power for many months.

The Ukrainian General Staff reported on March 31 that 200 “mercenaries from the Middle East,” likely Syrian troops, arrived at the Gomel military airfield in Belarus on March 29.[5] ISW published an assessment of Russia’s mobilization of reinforcements from Syria and elsewhere to Ukraine earlier on March 31.[6]

The Kremlin is likely accelerating efforts to establish quasi-state entities to govern occupied Ukrainian territory. The Ukrainian General Staff reported on March 30 that Russia is attempting to set up military-civilian administrations and is preparing to create a “Kherson’s Peoples Republic” to administer occupied southern Ukraine. The General Staff later reported on March 31 that Russia's FSB, the 652nd Group of Information and Psychological Operations, and officers of the 12th Main Directorate of the General Staff of the Russian Federation are currently overseeing the occupation around Kherson, and the Kremlin is “curating” Russian law enforcement personnel and court officials for deployment to Ukraine at an unspecified future date.[7]

Main effort—Kyiv axis: Russian operations on the Kyiv axis were aimed at encircling the city from the northwest, west, and east. It is unclear if forces on this axis have been given a new mission and, if so, what it might be.

The Ukrainian General Staff reported on March 31 that elements of Russia’s 35th Combined Arms Army (CAA), 36th CAA, and 76th Air Assault Division withdrew from positions northwest of Kyiv into Belarus to restore combat capabilities and possible redeployment to other axes of advance.[8] Belarusian social media users additionally observed a large column of Russian Naval Infantry (vehicles marked with a “V”) moving through Gomel, Belarus towards the Russian border on March 30.[9] These units – particularly the 76th Air Assault Division—have likely suffered extensive damage since February 24 and are highly unlikely to quickly reconstitute their combat power. Russia may seek to redeploy these damaged units to Donbas or into the fighting around Izyum, but they will likely be of limited utility in the short term and face growing morale problems.

Ukrainian counterattacks west of Kyiv since March 29 have reportedly pushed Russian forces north of the critical E-40 highway, the southernmost extent of Russian advances around Kyiv.[10] Local media and social media users reported that Ukrainian forces have recaptured Lisovo, Kapitanivka, Dmytrivka, Kopiliv, and Buzova since March 29. Fighting continued throughout Bucha, Makariv, and Hostomel in the past 24 hours.[11] Ukrainian counterattacks will likely continue to steadily roll back Russian-occupied territory northwest of Kyiv in the coming days, but a sustained Ukrainian offensive to drive Russian forces out of artillery range of Kyiv would likely require a greater concentration of forces.

Ukrainian forces are taking advantage of Russian force withdrawals of damaged units around Brovary to conduct successful counterattacks. The Ukrainian General Staff reported on March 31 that Russia continues to withdraw elements of its forces around Brovary for redeployment elsewhere, and the Kyiv Oblast administration stated its observed Russian forces withdrawing from Baryshivska, Kalityanska, and Velykodymerska on March 31.[12] Social media users reported that Ukrainian forces recaptured Ploske, Svitylnya, and Hrebelky (all east of Brovary) on March 30 and entered Nova Basan on March 31.[13]

A separate Ukrainian counterattack reportedly recaptured Sloboda, just south of Chernihiv city, on March 30.[14] The Ukrainian General Staff stated on March 31 that elements of Russia’s 2nd CAA, 41st CAA, and 90th Tank Division are operating around Chernihiv and concentrated on reinforcing their defensive positions around Chernihiv in the last 24 hours.[15] The General Staff additionally stated that it expects Russian forces to intensify their fire against Ukrainian forces in the coming days to cover the redeployment of Russian forces.[16]

Ukrainian forces are likely conducting successful counterattacks in Sumy Oblast but the advances claimed by local authorities are likely false. Sumy Regional State Administration head Dmytro Zhyvytskyi claimed on March 31 that all of Sumy Oblast except the Konotop area has been liberated from Russian forces.[17] This claim is highly likely to be false, as we have observed no evidence of Ukrainian forces pushing the Russian military back to the international border or completely relieving Sumy. However, Ukrainian forces are likely successfully conducting counterattacks toward Sumy, supporting similar operations in Chernihiv Oblast. ISW will update this assessment as more information is available. 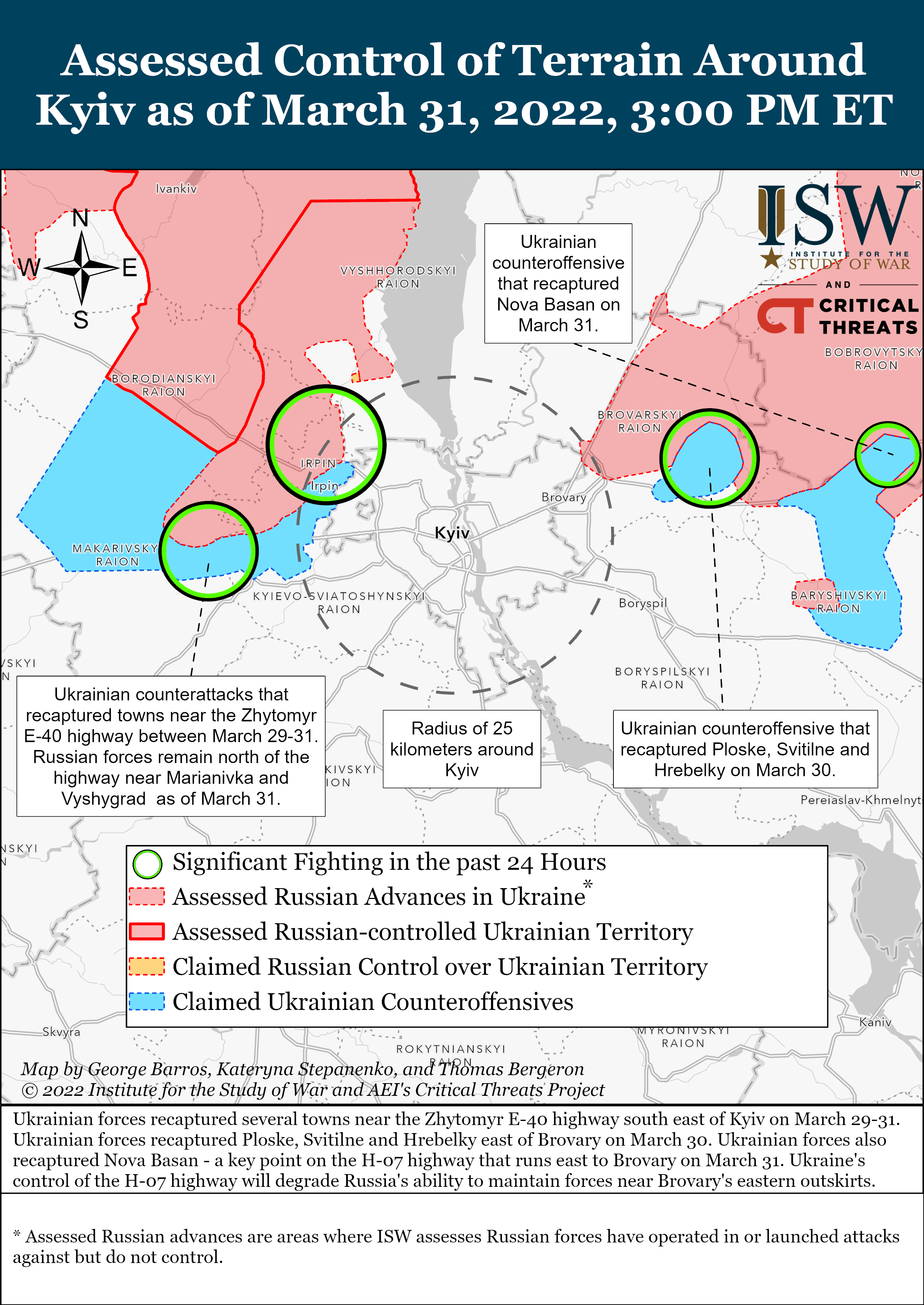 The Ukrainian General Staff reported on March 30-31 that Russian forces are assembling forces previously withdrawn from other lines of Russian advance to form “strike groups” reinforced with artillery to the Izyum area.[18] Russian forces likely intend to advance southeast from existing positions around Izyum to link up with Russian forces advancing west in Luhansk Oblast, but damaged Russian units redeployed from northeastern Ukraine will likely be of limited utility in the near future.

The Russian Ministry of Defense claimed that Russian aircraft and loitering munitions targeted four Ukrainian command posts and an S-300 air defense system south of Izyum on March 31, though ISW cannot independently confirm this claim.[19] Russian forces continued to shell Kharkiv but did not conduct any assaults on the city in the past 24 hours.[20]

Ukrainian forces continued to repel Russian assaults throughout Donetsk and Luhansk Oblasts, particularly concentrated on Popasna and Rubizhne, in the past 24 hours.[21] The Ukrainian General Staff reported at 6:00 am local time on March 31 that Ukrainian forces repelled five enemy attacks over the previous 24 hours and claimed to have destroyed 10 tanks, 18 armored and 13 unarmored vehicles, and 15 artillery systems.[22] The General Staff additionally stated that the Russian air force intensified its operational tempo in the Donbas region in the past 24 hours.[23] The Russian General Staff claimed that LNR forces captured Zhytlivka (northwest of Severodonetsk) and Zolota Nyva (southwest of Donetsk) on March 31, but ISW cannot verify this claim.[24] 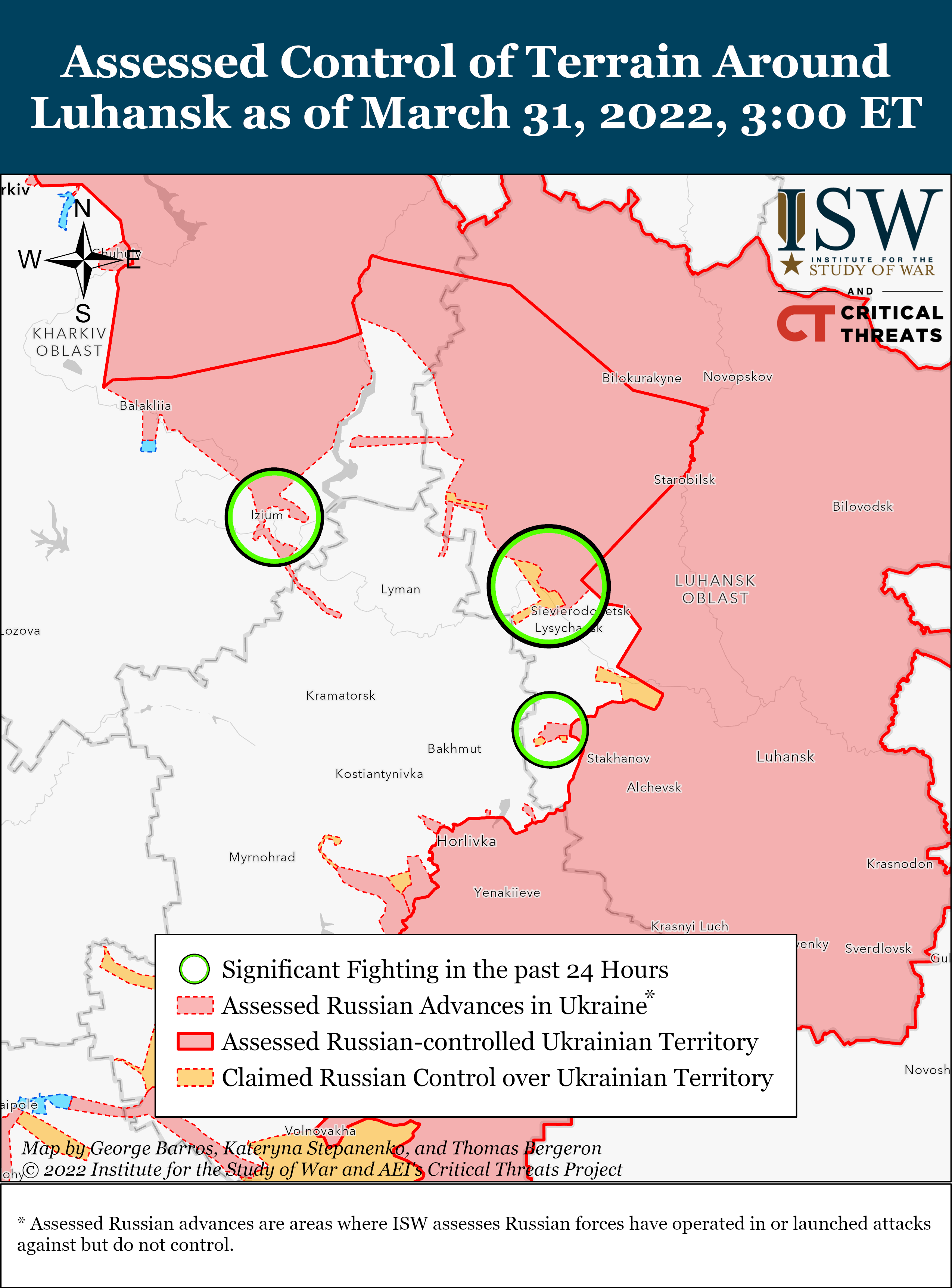 Russian forces likely continued to advance in Mariupol on March 31.[25] DNR and LNR officials claimed that DNR forces are involved in Russian operations in Mariupol alongside Russian forces.[26] 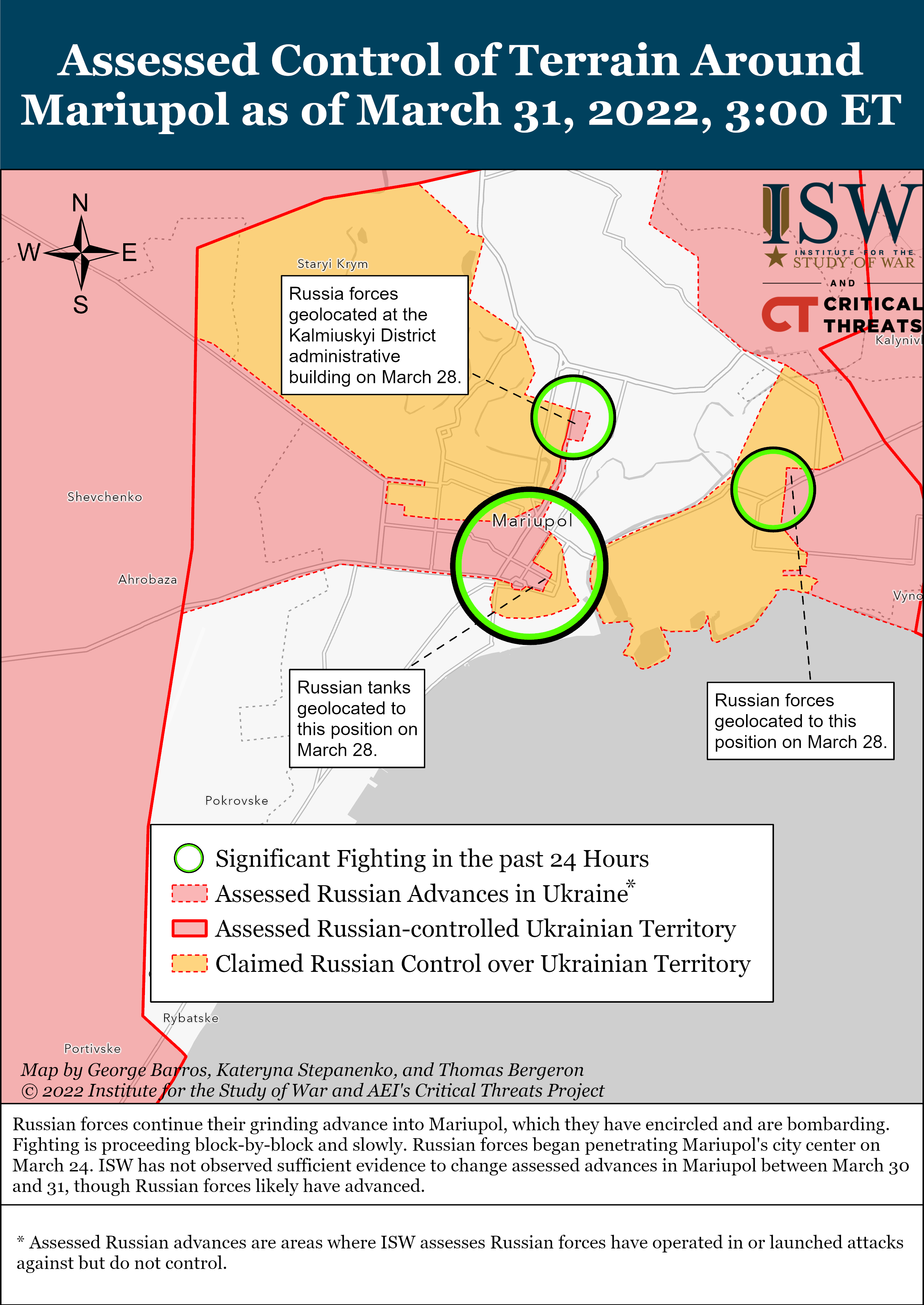