Russian forces continued concentrating in the eastern, northwestern, and western outskirts of Kyiv for an assault on the capital in the coming 24-96 hours. The reported appearance of forces belonging to Chechen leader Ramazan Kadyrov, Russia’s Rosgvardia internal security formations, and the Liga (former Wagner) Private Military Company in the western outskirts of Kyiv may indicate that the Russian military is struggling to assemble sufficient conventional combat power to launch its assault on the capital. Russian forces near Kyiv made limited gains and prepared for limited drives to continue their attempted encirclement to the west.

Ukrainian forces have continued to challenge the lengthy Russian ground lines of communication leading from near Sumy to eastern Kyiv. Russian forces near Kharkiv have been steadily diverting to secure and extend those lines over the past few days, as we have reported. The Ukrainian General Staff reported on March 8 that Russian troops currently near Chernihiv appear to be moving east. We assess that those forces may seek to link up with troops coming from near Sumy to help them consolidate and protect their extended lines in support of the planned offensive against Kyiv.

The situation in eastern Ukraine and southwestern Ukraine remained largely unchanged in the past 24 hours. Ukrainian General Staff reporting of additional Russian efforts to advance on the city of Zaporizhya likely confirm that Russia intends to make blocking that city a priority. The forces Russia is so far moving toward Zaporizhya appear to be far too small to encircle or take it. 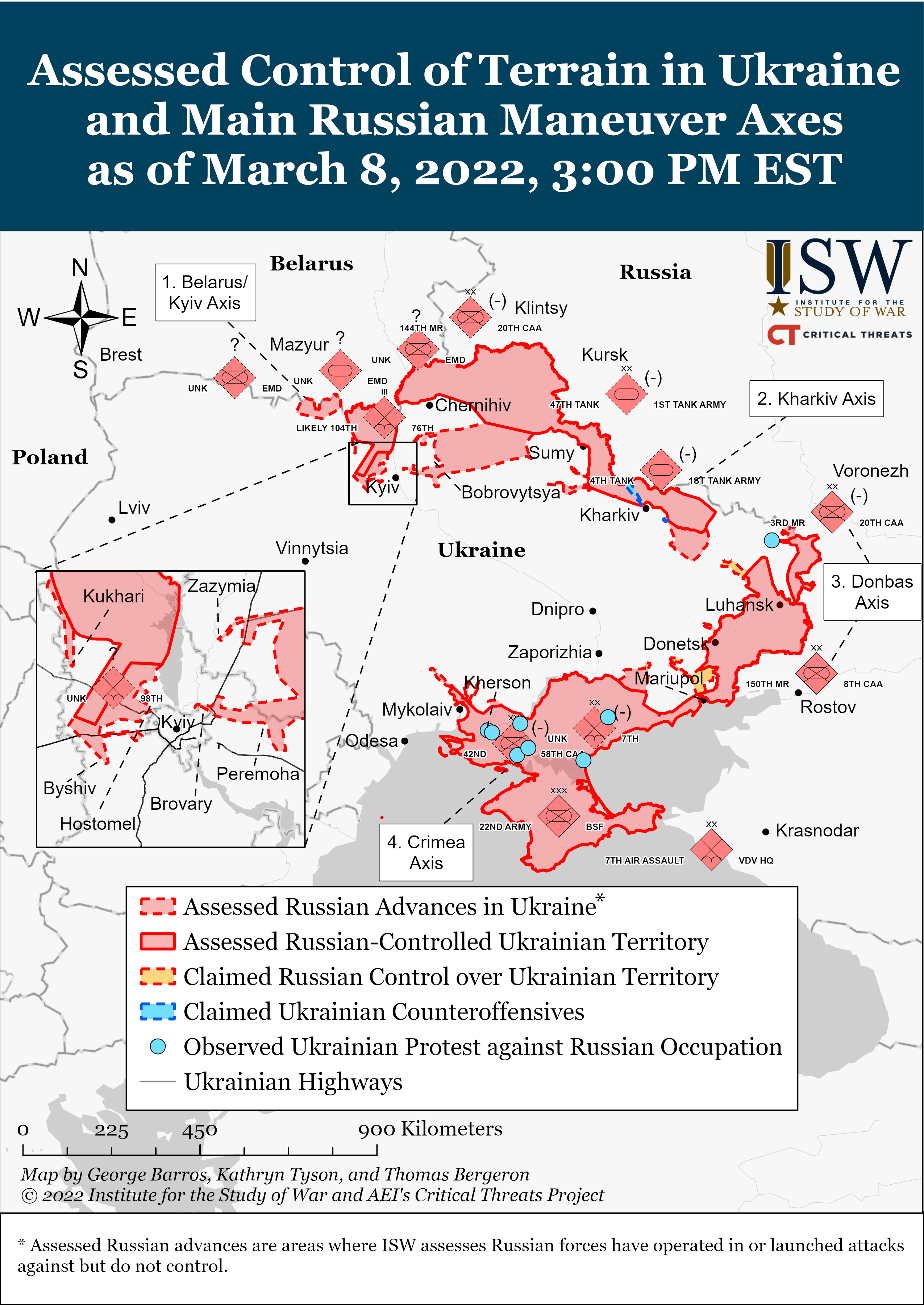 Main effort—Kyiv axis: Russian operations on the Kyiv axis are aimed at encircling the city from the northwest, west, east.

Russian forces continue preparations for an assault on Kyiv in the coming days. They have made limited but notable gains in Kyiv’s northwestern outskirts and continued to concentrate forces for an attack into the city.

The Ukrainian General Staff reported on March 7 that elements of Russia’s Rosgvardia security forces, Ramazan Kadyrov’s Chechen fighters, and Wagner Group mercenaries (which the General Staff indicated have rebranded into a private military company called “Liga”), are preparing to join the renewed assault on the capital.[1] The use of such forces in addition to conventional military units to lead an assault is unusual. It likely indicates that the Russian military is struggling to amass sufficient combat power on this axis from the available conventional military units. Observed and reported casualties among Russian mechanized and airborne forces in the vicinity of northwestern Kyiv Oblast have been very high, and various reports suggest that the morale and combat effectiveness of the remaining conventional forces there are low.

The former Ukrainian mayor of Irpin reported that the Russians have consolidated control over towns around Irpin including Bucha and Hostolmel (the town near Antonov Airfield).[2] The Russians are using siege-and-starve tactics in these areas—preventing inhabitants from leaving while depriving them of food, fuel, and other necessities. Irpin is roughly 20 kilometers from the center of Kyiv and an important staging area for continued Russian operations against the capital.

The Ukrainian General Staff also reported indications that Russian force elements drawn from the 29th, 35th, and 36th Combined Arms Armies; airborne troops; and naval infantry from the Pacific Fleet are preparing to renew efforts to encircle Kyiv.[3] In particular:

Elements of the Russian 98th Airborne Division and the 45th Guards Spetsnaz Brigade were also reportedly located near Dymer, about 40 kilometers northwest of Kyiv close to the Dnipro River, on March 8.[4]

The Ukrainian General Staff reported on March 8 that Russian forces of the 2nd CAA, 41st CAA, and 90th Tank Division are trying to block Chernihiv in preparation for attacking Sumy to the west.[5] It previously reported its assessment that Russian troops intend to seize Chernihiv city on March 6.[6] Major Russian combat operations against Chernihiv City have not been reported as of this publication.

Russian troops continue attempting to establish themselves in Kyiv’s eastern outskirts as of March 8. At least six Russian tanks and two armored personnel carriers were observed driving through Bohdanivka, a village approximately 30 kilometers northeast of Kyiv’s center, on March 8.[7] Ukrainian forces in Sumy are degrading Russia’s ability to assemble forces east of Kyiv. The Ukrainian General Staff stated on March 8 that Ukrainian forces stopped an offensive of up to five BTGs of the 90th Tank Division and four BTGs of the 2nd CAA from Glukhiv, Sumy Oblast, on March 8.[8] The Russians are likely amassing forces to overcome this resistance. Ukraine's General Staff shared its assessment on March 7 that up to 12 BTGs of the 1st Tank Army, up to eight BTGs of the 20th CAA, and up to two BTGs of the 6th CAA and 14th Army Corps are focusing on Kaniv in Cherkassy Oblast in central Ukraine.[9]

ISW has previously assessed that Russian forces in and around Brovary likely came from the Sumy axis and continue to be supported along the roads stretching east through Sumy to Russia. The Russians face challenges sustaining that long logistics line, however, particularly since they have not yet captured Sumy itself and as Ukrainian forces continue to conduct attacks along it. The Ukrainian General Staff assessed again on March 8 that Russian forces are focused on encircling Sumy (and other cities).[10] Continued Russian airstrikes and artillery attacks on Sumy on March 7 were likely meant to set conditions for a ground offensive against the city.[11]

Russian forces likely did not make territorial advances in Kharkiv Oblast over the past 24 hours. Ukraine’s General Staff stated on March 8 that elements of Russia’s 25th Motorized Rifle Brigade of the 6th CAA withdrew from Kharkiv and returned to Belgorod to restore its combat capability.[12] Kharkiv Oblast governor stated that Ukrainian defenders repelled an unsupported Russian air assault against Vovchansky, a town roughly 60 kilometers northeast of Kharkiv, on March 8.[13] The Ukrainian General Staff also stated that Ukrainian forces repelled Russian troops that attempted to attack Izyum, a town roughly 70 kilometers southeast of Kharkiv’s city center, on March 7.[14] ISW is unable to verify at this time the Ukrainian government’s March 7 claim that Ukrainian forces killed First Deputy Commander and Chief of Staff of the 41st CAA Vitaly Gerasimov in Kharkiv.[15]

There was no significant activity reported in this area in the past 24 hours.

Russian forces continued their encirclement of Mariupol and have increased efforts to break into the city as well as to consolidate control of terrain in Donetsk Oblast. Russian proxies claimed to have gained control over the highway between Volnovakha and Mariupol on March 8.[16] Ukraine’s General Staff stated on March 7 that up to three BTGs of the 19th Motorized Rifle Division of the 58th CAA are regrouping for offensive operations against Mariupol.[17] Russian troops also attempted to enter the neighborhood of Troiitske, West of Mariupol, on March 7 but were repulsed according to the Ukrainian General Staff.[18] Russian forces continue to falsely claim that Ukrainian forces are blocking civilian evacuation corridors from Mariupol as of March 8.[19] Social media posts testify to the intensity of combat in and around Mariupol.[20]

The general situation in this area remained unchanged in the last 24 hours. The Ukrainian General Staff claimed that Ukrainian naval infantry conducted a raid that destroyed 30 Russian helicopters at Kherson Airbase.[21] Roughly 49 Russian helicopters had been spotted at Kherson Airbase on March 6.[22] ISW has no independent confirmation of the reported raid or its effects.

Russian forces appear to be prioritizing operations north from Crimea toward Zaporizhya City itself. Russian forces continued making territorial gains toward Zaporizhya on March 8. The Ukrainian General Staff stated that two BTGs of the 71st Motorized Rifle Regiment occupied Hulyaipole and Orikhiv on March 8.[23] Social media users observed a Russian armored train in Novobohdanivka, roughly 85 kilometers south of Zaporizhya, on a rail line that leads to Zaporizhya on March 8.[24] The Ukrainian General Staff reported on March 7 that up to four BTGs of the 42nd Motorized Rifle Division and 136th Motorized Rifle Brigade of the 58th CAA are moving in the direction of Zaporizhya.[25] Its previous report had identified three Russian BTGs advancing north toward Zaporizhya.[26] Zaporizhya is a large city of nearly three-quarters of a million people. Russian troops are unlikely to be able to encircle or seize it with an attack on this scale if Ukrainians defend it as they have defended other threatened cities.

Russian troops are increasing their efforts to close in on Mykolayiv. Ukraine’s General Staff reported that a Russian element—possibly up to a single BTG—unsuccessfully attempted offensive operations in the direction of Ternivka but was repulsed and driven back to existing Russian force concentration areas near Kapustyne, Balovne, and Novomatviyivske.[27] Kapustyne and Balovne are approximately 10 kilometers from Mykolayiv’s city center. Russian forces are unlikely to capture Mykolayiv without committing additional forces to that effort. Russian forces may instead bypass Mykolayiv entirely and opt to drive north to a crossing further up the Southern Bug before advancing west toward Odesa.

[12] UA General Staff SITREP of 1200 MAR 8 stated that elements of the 25th Motorized Rilfe Brigade (6th CAA) left the combat zone in Kharkiv and returned to Nekhoteevka, Belgorod, to restore its combat capability.