Russian forces did not make any significant advances anywhere in Ukraine on May 11, and Ukrainian forces took further ground northeast of Kharkiv. The Ukrainian counteroffensive north of Kharkiv City has forced Russian troops onto the defensive and necessitated reinforcement and replenishment efforts intended to prevent further Ukrainian advances towards the Russian border. Russian efforts along the Southern Axis and in Donetsk and Luhansk Oblasts remain similarly stalled, and Russian forces have not made any significant gains in the face of continued successful Ukrainian defenses. 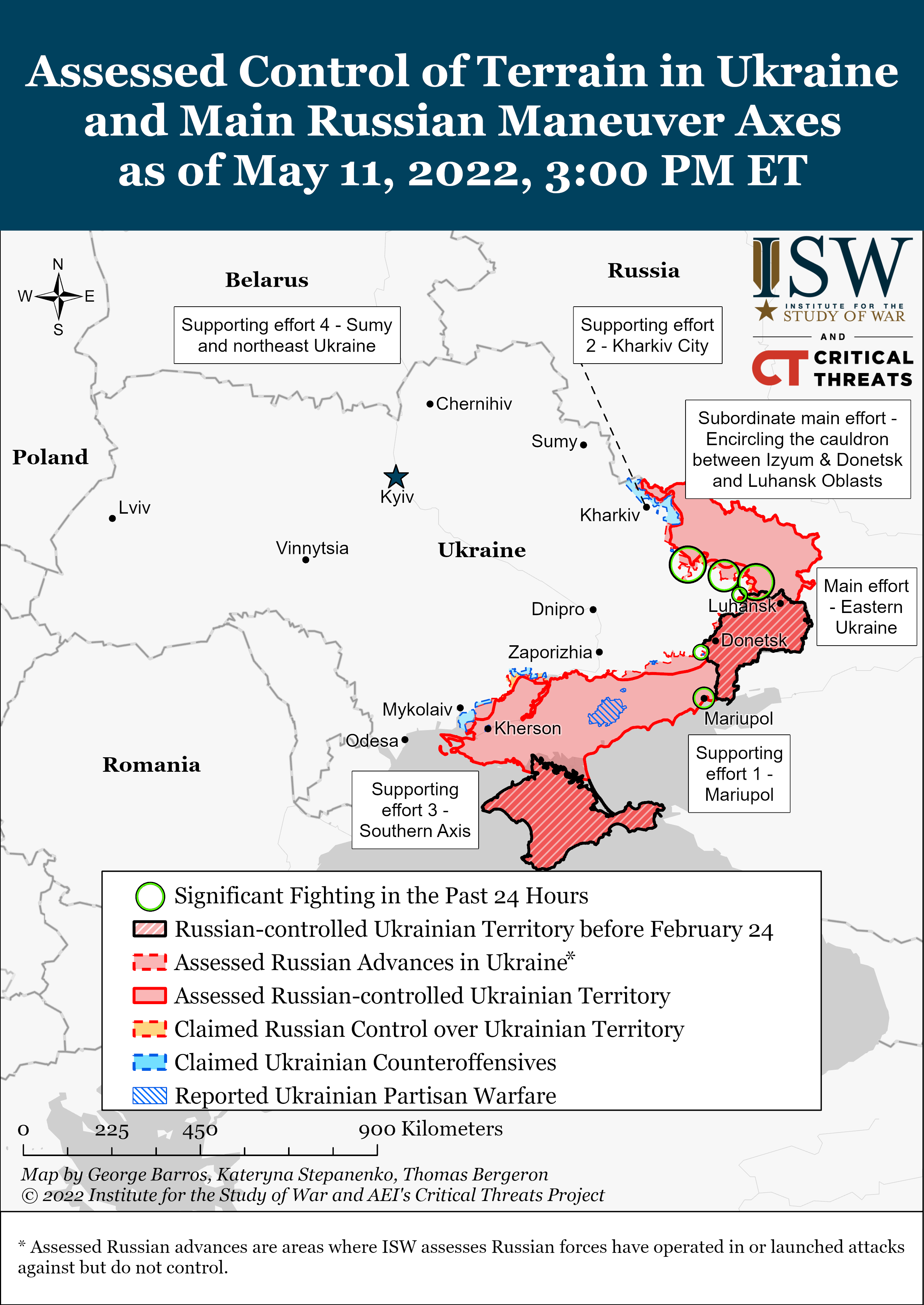 Russian forces fired at Ukrainian positions around Izyum but did not make any confirmed advances on May 11. The Ukrainian General Staff stated that elements of the Russian Airborne Forces (VDV), 1st Guards Tank Army, 20th, 29th, 35th, and 36th Combined Arms Armies, and 68th Army Corps focused on inflicting fire damage on Ukrainian troops around Izyum.[1] The Deputy Chief of the Ukrainian General Staff’s Main Operations Department, Brigadier General Oleksiy Gromov, additionally stated that Russian forces have moved to defense and deterrence actions around Izyum due to the successful Ukrainian defense.[2] Pro-Russian media outlet Readkova noted that Ukrainian forces are attempting to cross the Severskyi Donets River by Chepil (about 40 kilometers northwest of Izyum) to cut off Russian ground supply lines to Izyum, although ISW cannot independently confirm this claim.[3]

Russian forces continued ground offensives westward in Donetsk and Luhansk Oblasts on May 11. Russian troops continued attempts to encircle the Rubizhne-Severodonetsk-Lysychansk area and Ukrainian sources reported intense fighting in Severodonetsk, Lysychansk, Rubizhne, Bilohorivka, Vojevodivka, Nyzhnie, Toshkivka, and Orikhove.[4]  Russian forces are also likely preparing for a new line of advance towards Bakhmut, about 50 kilometers southeast of Slovyansk, along the M03 highway.[5] Head of Luhansk Regional State Administration Serhiy Haidai stated that Russian forces are firing on the road that runs between Lysychansk and Bakhmut to interdict Ukrainian troops, which is consistent with claims made by a Russian war reporter that Russian forces are developing an offensive towards Bakhmut.[6] Bakhmut lies just west of Popasna and the Donetsk-Luhansk Oblast border, which Russian forces reportedly crossed on May 10.[7] The move towards Bakhmut is likely intended to gain access to the M03 highway and continue the northwestward push towards Slovyansk. Russian forces continued unsuccessful ground assaults around Donetsk City, as they have for the last several days.[8] 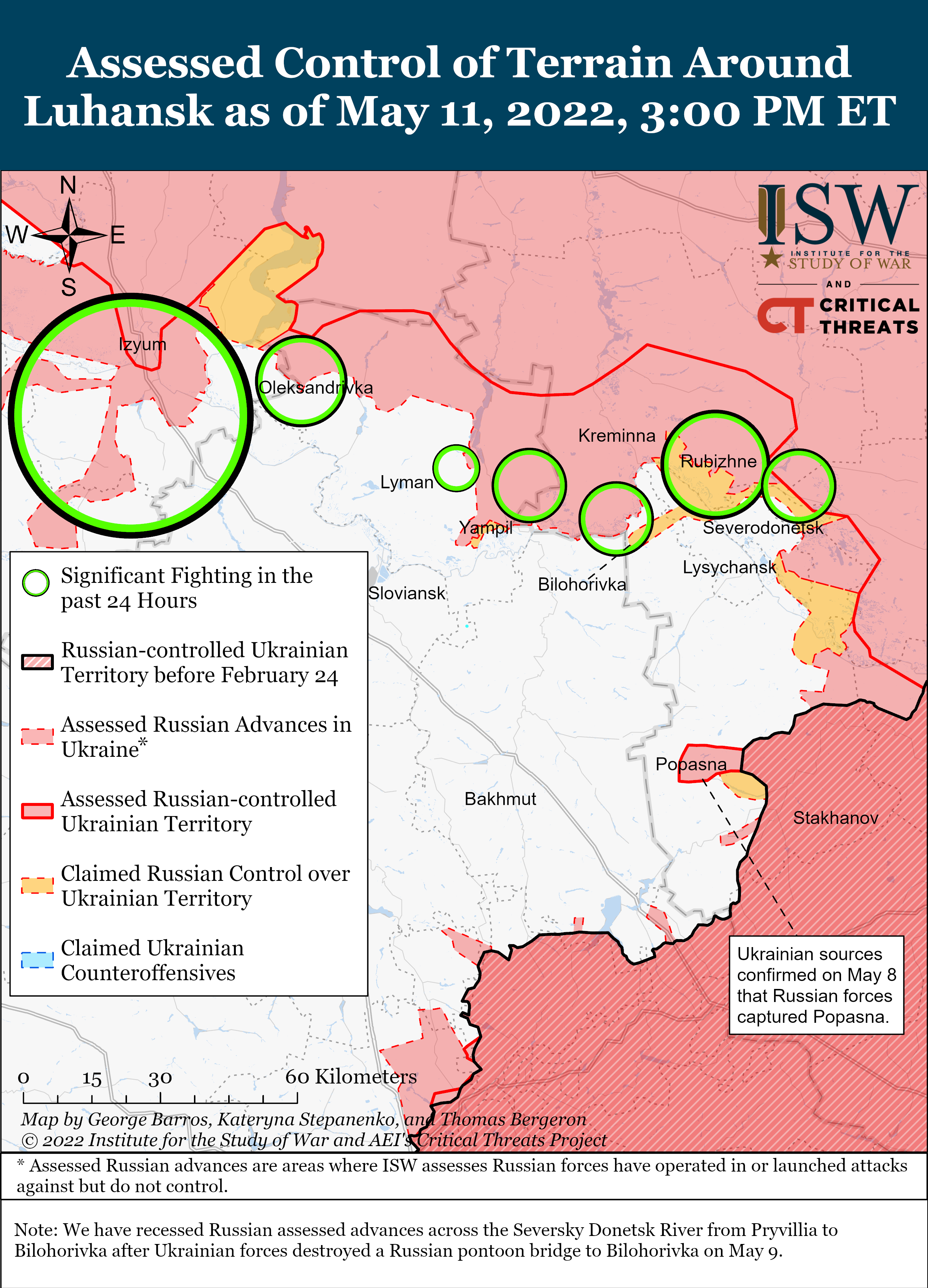 Russian forces continued to conduct ground attacks against Ukrainian positions in the Azovstal Steel Plant with the support of air and artillery strikes on May 11.[9] The Azov Regiment stated that Russian forces launched 38 airstrikes and 4 strategic bombing flights on Azovstal in the last 24 hours.[10]

Advisor to the Mayor of Mariupol Petro Andryushchenko claimed that Russian authorities are deporting those who are deemed to be “suspicious” during filtration measures in Mariupol to a detention camp in Olenivka, Donetsk Oblast.[11] Andryushchenko compared the facility to a concentration camp and stated that detainees are subject to overcrowding, atrocious conditions, mass interrogations, and forced disappearances.[12] ISW cannot independently confirm these claims, but they are fully in line with previously reported Russian ”filtration” measures in occupied Ukraine. 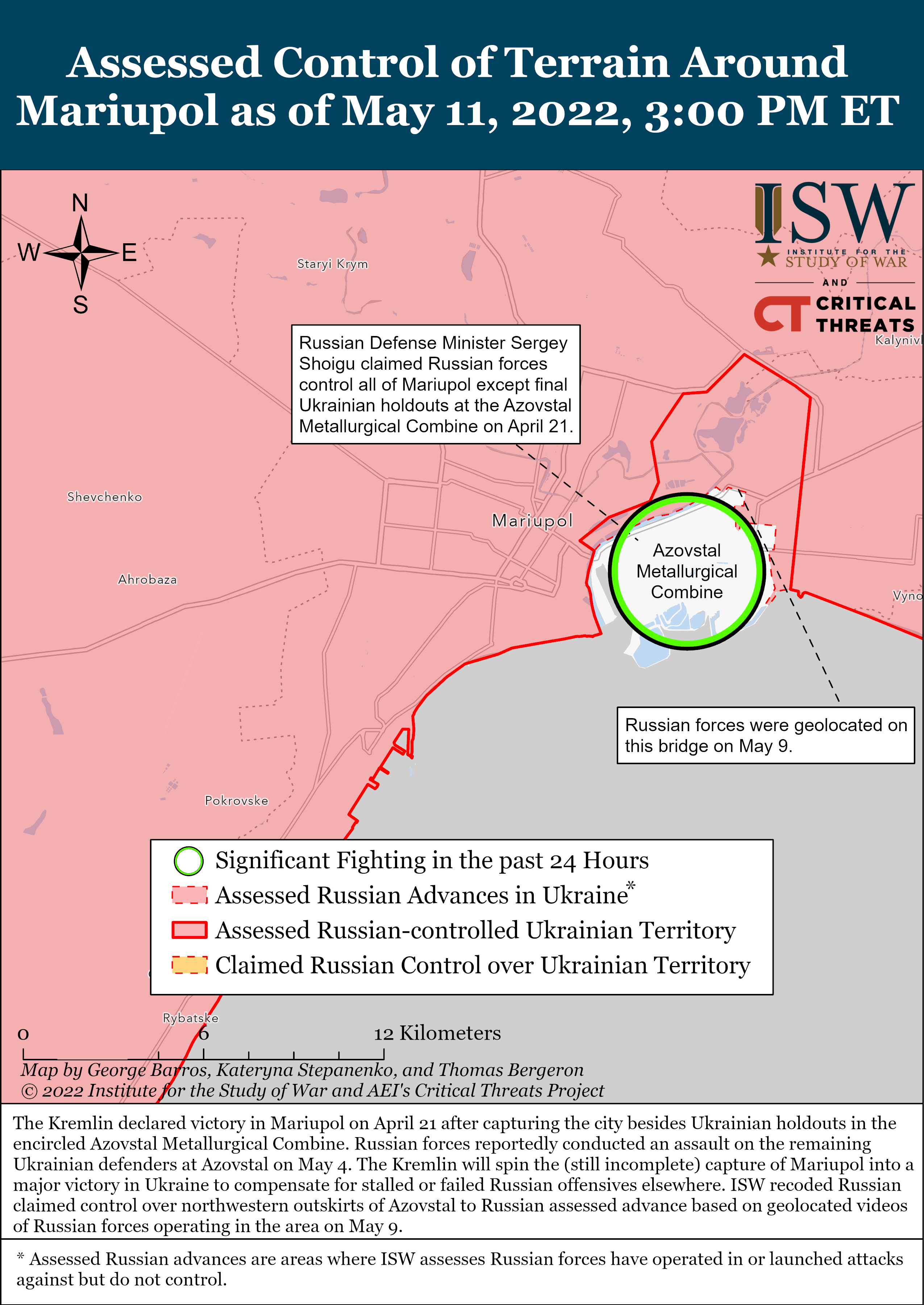 Russian forces moved to the defensive in order to prevent further advances north to the Russian border by the ongoing Ukrainian counteroffensive around Kharkiv City on May 11.[13] Pro-Russian media outlet Readkova reported that Ukrainian forces are preparing for an offensive in Kozacha Lopan and Tsupivka, both within 10 kilometers of the international border, confirming reports from May 10 that Ukrainian forces had advanced to within 10 kilometers of the Russian border.[14] The Ukrainian General Staff reported that elements of the Russian 6th and 41st Combined Arms Armies and coastal units of the Baltic and Northern Fleets are conducting reconnaissance against Ukrainian positions in northern Kharkiv to stymie further advances.[15] The General Staff statement notably does not mention the Russian 1st Guards Tank Army, which was active in the area as of May 8.[16] If confirmed, this may indicate that elements of the 1st Guards Tank Army withdrew to Belgorod to reconstitute and refit following losses sustained around Kharkiv City. Head of the Kharkiv Regional State Administration Oleg Synegubov noted that artillery pressure against the northeastern suburbs of Kharkiv City has been alleviated, indicating Ukrainian forces have successfully driven Russian forces largely out of artillery range of Kharkiv City.[17] 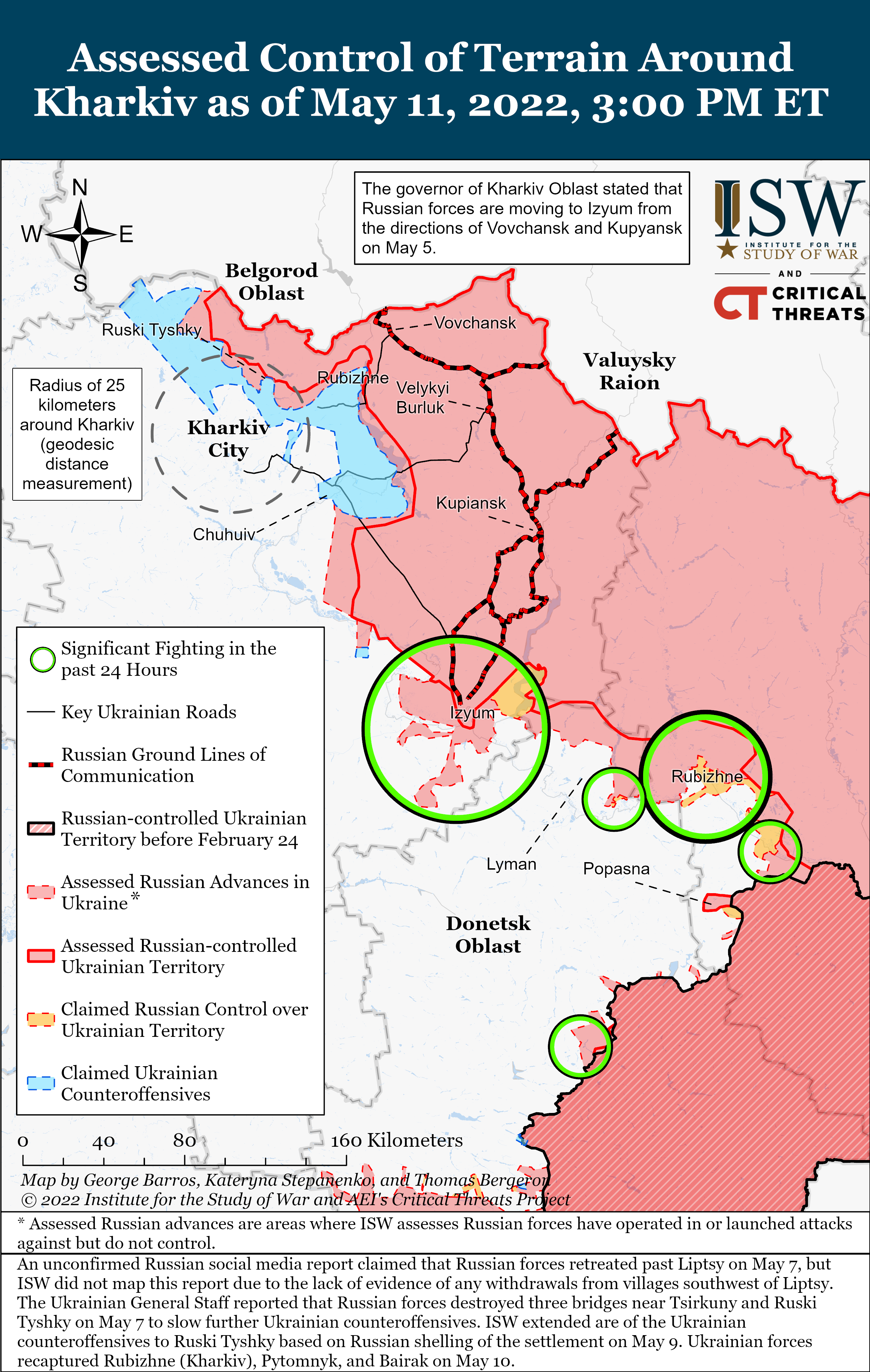 Russian forces continued to shell Ukrainian positions along the Southern Axis but did not make any confirmed advances on May 11.[18] The Ukrainian General Staff reported that Russian forces are attempting to take control of Bruskynske and Velyka Oleksandrivka to improve their tactical position in the South.[19] These settlements lie within 15 kilometers of the Kherson-Mykolaiv border and would likely allow Russian troops to conduct offensive actions towards Mykolaiv. The UK Ministry of Defense stated that Russian troops are likely trying to reinforce their garrison on Snake Island off the coast of Odesa for increased access to the northwestern Black Sea.[20] The situation in Transnistria remains tense but unchanged.[21] 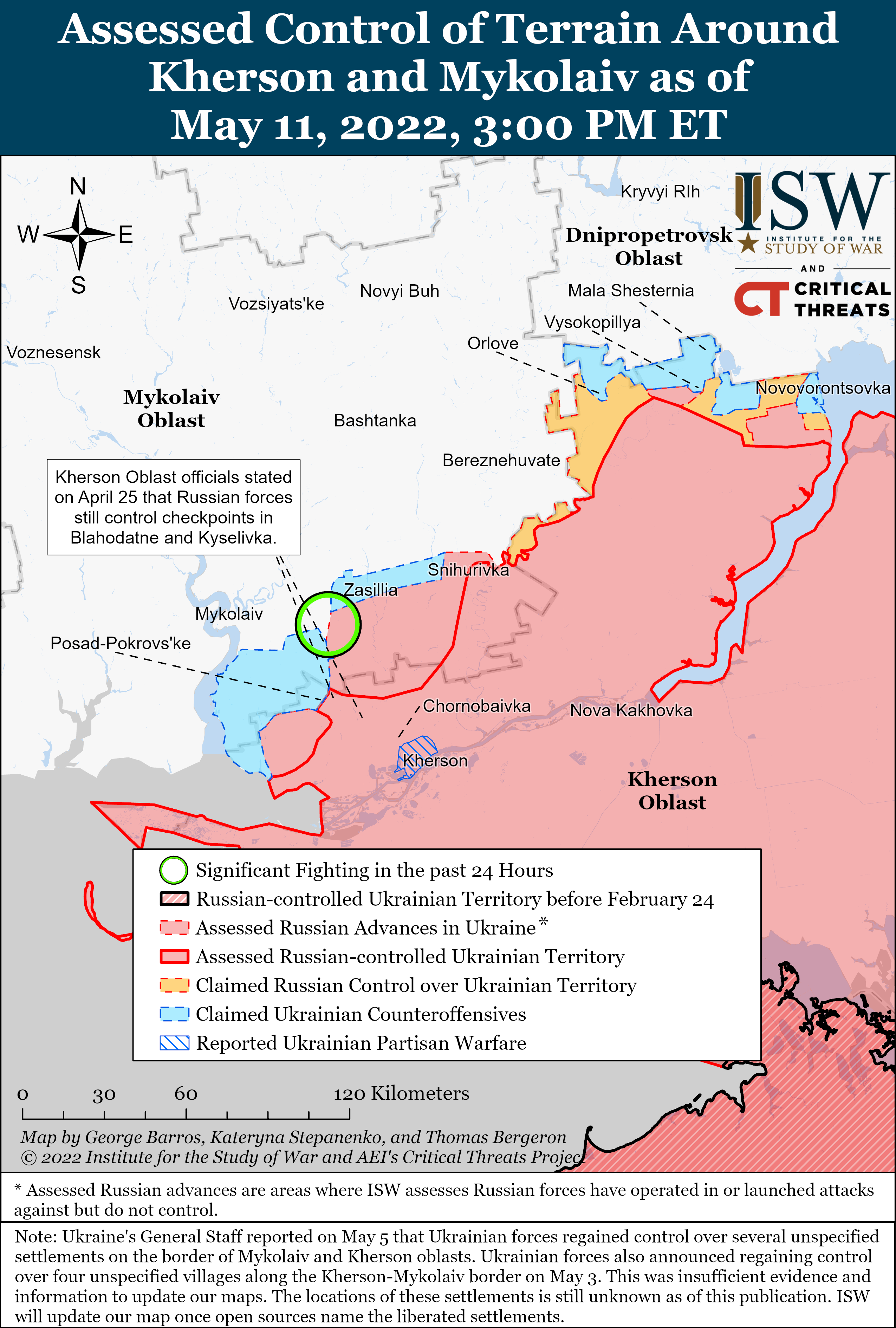 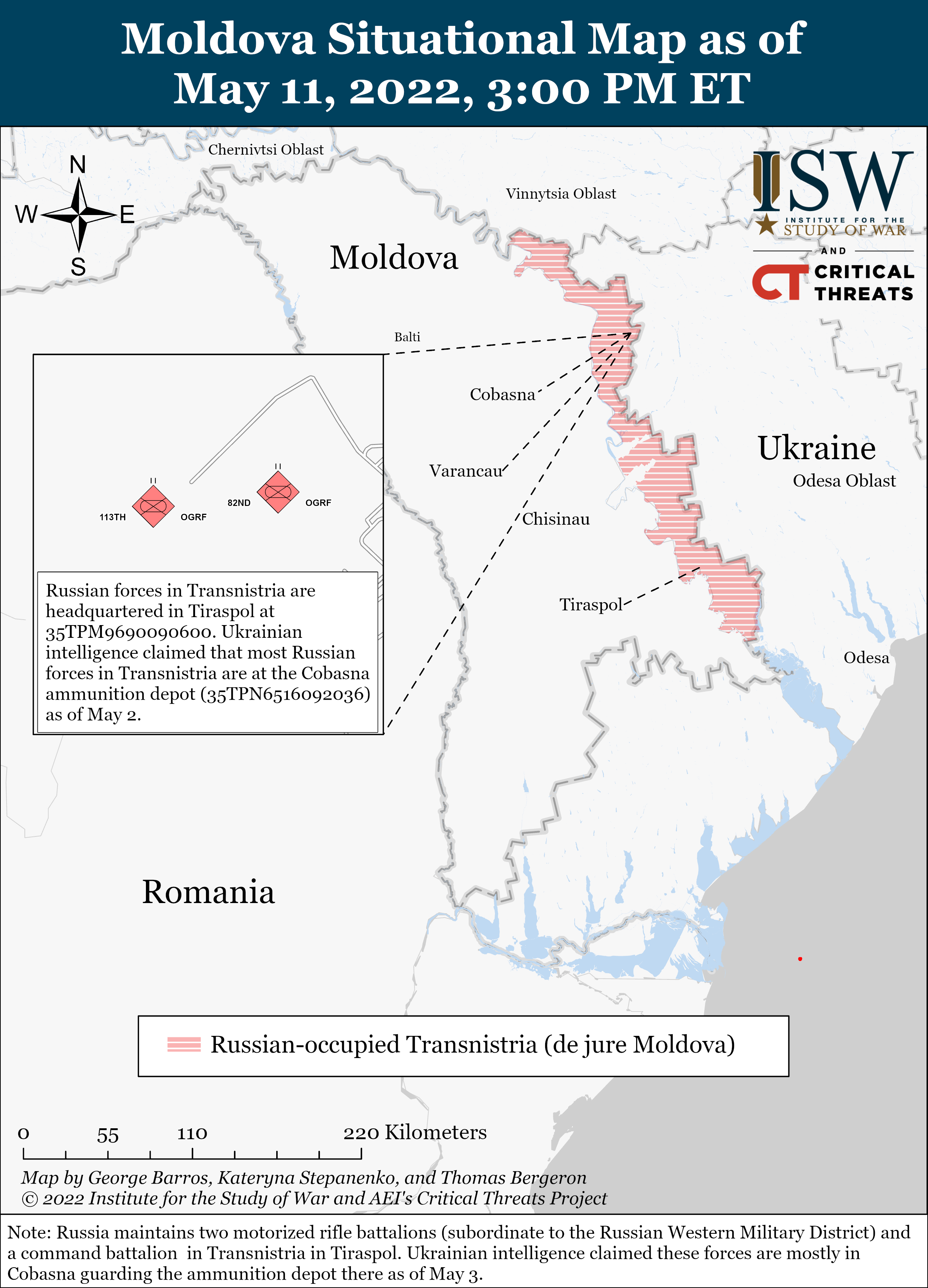