Russian occupation authorities announced plans to destroy the Azovstal Steel Plant and turn Mariupol into a resort city, depriving Russia of some of the most important economic benefits it hoped to reap by taking the city in the first place. Head of the Donetsk People’s Republic (DNR) Denis Pushilin stated that DNR authorities are planning to level Azovstal after completing its capture.[1] Azovstal was a major element of Mariupol’s economy before the war because of its unique function as a full-cycle metallurgical complex, the 10,000 jobs associated with production at the plant, the billions of dollars of foreign exchange earnings and taxes it generated, and its production output of 7,000 tons of steel, 6 million tons of iron, and 4.5 million tons of rolled metal, according to the Mariupol City Council.[2] Pushilin stated that the DNR intends to rebuild Mariupol to be a “resort city,” while admitting that 60% of the structures in Mariupol have been destroyed to the point where they cannot be rebuilt.[3] The announced plan to turn Mariupol into a center of tourism and leisure following the complete destruction of a major center of economic activity in Mariupol, is indicative of the damage that Russian troops have inflicted on themselves through the destruction of Mariupol. Russia does not need another resort town on the Black Sea. It does need the kind of hard currency that a plant like Azovstal had generated. This announcement epitomizes the kind of Pyrrhic victories Russian forces have won in Ukraine, to the extent that they have won victories at all.

The Kremlin may hope to offset the loss of revenues from Azovstal and other destroyed infrastructure in Ukraine by profiting from the Zaporizhia Nuclear Power Plant that is forces have seized. Russian Deputy Prime Minister Marat Khusnullin announced that he will allocate maximum integration assistance for Zaporizhia Oblast to work in a “friendly Russian family” during his visit to Melitopol on May 18.[4] Khusnullin added that the Zaporihia Nuclear Power Plant will exclusively work for Russia and will sell electricity to Ukraine. This statement is a clear Russian recognition that there will be an independent Ukraine at the end of this war and that Russia seeks to restore its energy leverage over Ukraine and possibly the West more broadly that has been reduced by sanctions and efforts to reduce reliance on Russian energy. It also reinforces the urgency of helping Ukraine regain control of Enerhodar City and the rest of its occupied territory to forestall this renewed economic thralldom. ISW previously reported that Russian forces started digging trenches and blocking highways to Enerhodar City.[5] The Zaporizhia Oblast Military Administration reported that Russian occupation authorities continued to prepare for a referendum in Enerhodar City on May 18.[6]

Ukrainian officials reported protests in Donetsk and Luhansk People’s Republics (DNR and LNR) over forced mobilizations on May 16-17. The Ukrainian Military Intelligence Directorate (GUR) reported that relatives of the forcefully mobilized LNR servicemen demanded an immediate return of their family members from combat in Luhansk City and Rovenky approximately 50 kilometers west of Russian border.[7] The GUR noted that perceptions of war and resentment of mobilization in LNR worsened because of the high casualties Russian forces have suffered and the fact that Russian authorities are reportedly evading payments to the families of wounded and killed servicemen. Mariupol Mayor’s Advisor Petro Andryushenko had previously reported that a protest against mobilization had occurred in Donetsk City on May 16.[8] 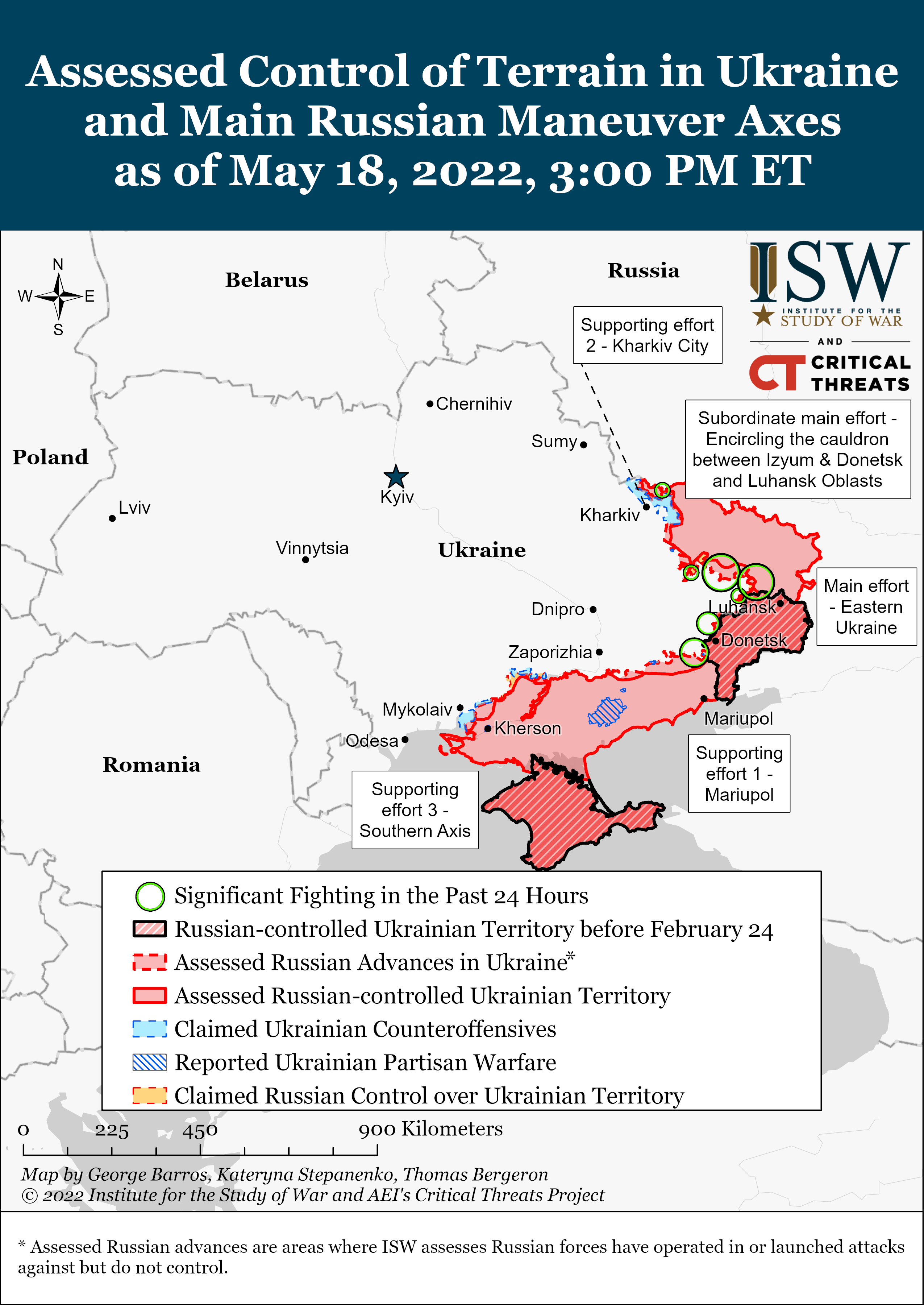 ISW has updated its assessment of the four primary efforts Russian forces are engaged in at this time. We have stopped coverage of supporting effort 4, “Sumy and northeastern Ukraine,” because it is no longer an active effort.

Russian forces did not advance south of Izyum on May 18. The Ukrainian General Staff reported that Russian forces used drones, rockets, and artillery units to support an unsuccessful offensive on Dovhenke - a settlement approximately 30 kilometers south of Izyum.[9] Russian forces are likely aiming to secure access to the Izyum-Slovyansk highway east of the settlement to resume the offensive on Donbas. A satellite image from May 12 released yesterday showed a sunken Russian pontoon bridge approximately seven kilometers southwest of Izyum, which had been previously used by Russian forces to transport heavy artillery in April.[10] Ukrainian forces could have damaged the pontoon bridge given that they had previously destroyed two bridges in the same location on March 27.[11] Damage to the bridge may be hindering Russian drives on Barvinkove southwest of Izyum, although Russian possession of the major highways in the area might be sufficient to support their current level of operations. Russian forces intensified offensive operations in the area of Lyman, likely to gain foothold west of the Siverskyi Donets river.[12]

Russian forces intensified shelling and conducted unsuccessful offensive operations near Popasna in preparation for the Battle of Severodonetsk.[13] The Ukrainian General Staff reported that Russian forces attempted to advance southwest and north of Popasna, but could not seize access to highways to Bahmut and Lysychansk.[14] Luhansk Oblast Administration Head Serhiy Haidai said that Russian forces are increasing aviation support for ground troops in Luhansk Oblast.[15]

Russian forces continued a line of unsuccessful ground assaults in an effort to advance to Slovyansk and Zaporizhia City.[16] Russian forces and artillery were the most active in the settlements east of Avdiivka, but did not secure any territorial gains.[17] Russian military Telegram channels criticized the functioning of the Russian reconnaissance-strike complex (used to identify and attack targets), on the grounds that its centralized approval system hinders Russian artillery from striking Ukrainian positions in time because of delays in securing approval to fire from higher command echelons.[18] 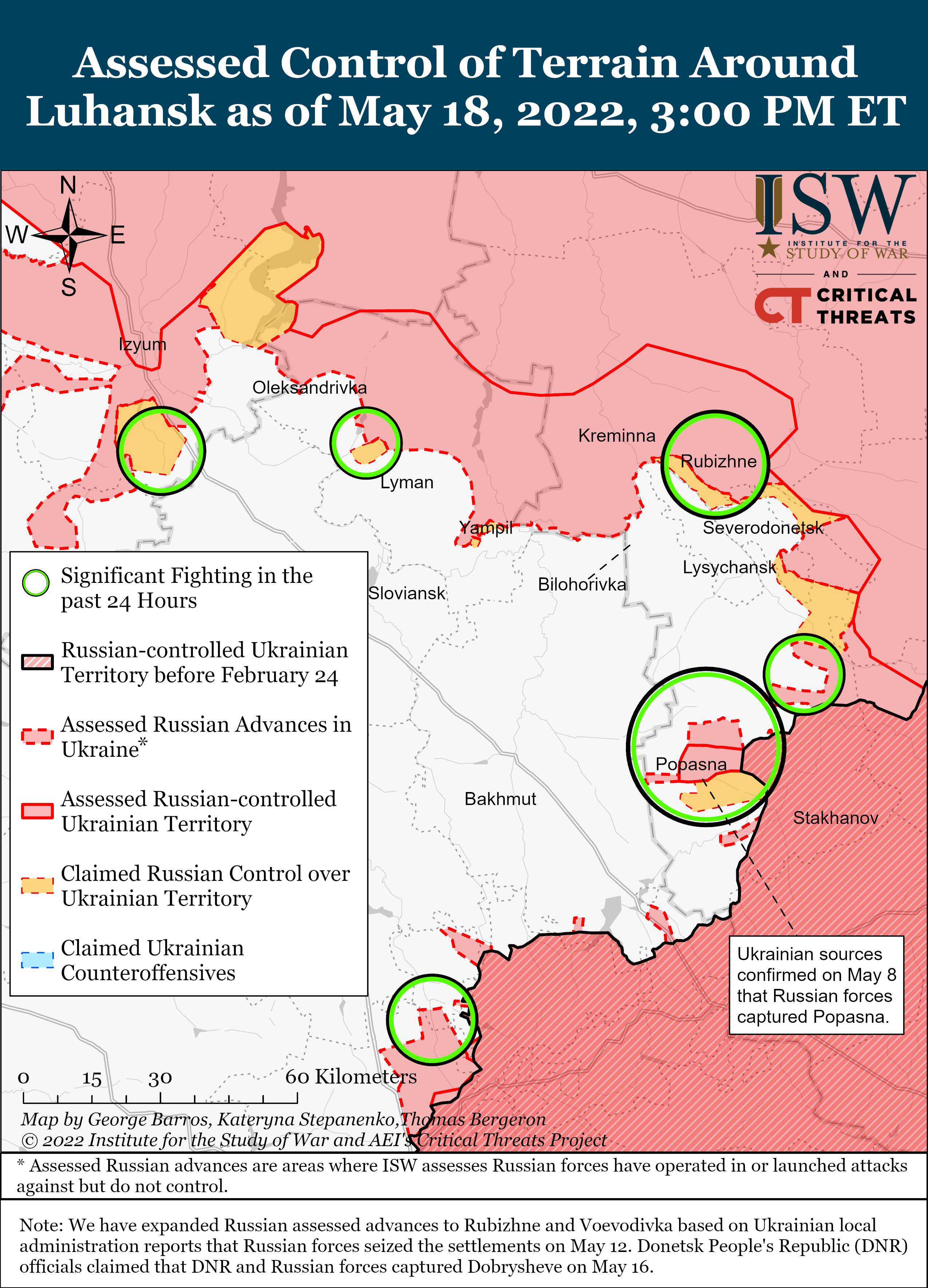 Russian forces continued to conduct air and artillery strikes against the remaining Ukrainian defenders in the Azovstal Steel Plant on May 18.[19] The Russian Ministry of Defense stated that 694 Ukrainian servicemen surrendered to Russian forces between May 17 to 18 and claimed that nearly 1,000 had surrendered in all since evacuations began.[20] Leader of the Donetsk People’s Republic (DNR) Denis Pushilin claimed that all the high-ranking Ukrainian commanders have not yet left the plant. ISW cannot independently confirm that Ukrainian servicemen remain in Azovstal, but continued Russian air and artillery strikes make it highly likely that there are still some Ukrainian troops in the plant.[21]

Russian authorities continued occupation activities in Mariupol. DNR head Pushilin held a press tour in Mariupol and stated that the DNR intends to fully restore Mariupol and turn it into a “resort town.”[22]  The Mariupol City Council notably stated that DNR authorities are planning to destroy the Azovstal Plant.[23] Occupation authorities also hosted a “high delegation” from Chechnya and promised close cooperation with the Chechen Republic, possibly in recognition of the role Chechen forces played in seizing the city, since there is no other obvious reason why Mariupol should cooperate closely with Chechnya.[24] Port authorities continued to prepare the Port of Mariupol for grain, metal, and clay exports under the supervision of a former head of the Russian Yeisk seaport, indicating administrative focus on continued integration into the Russian economy of such portions of the Mariupol economy as Russia has not yet completely destroyed or announced its intention of destroying.[25] 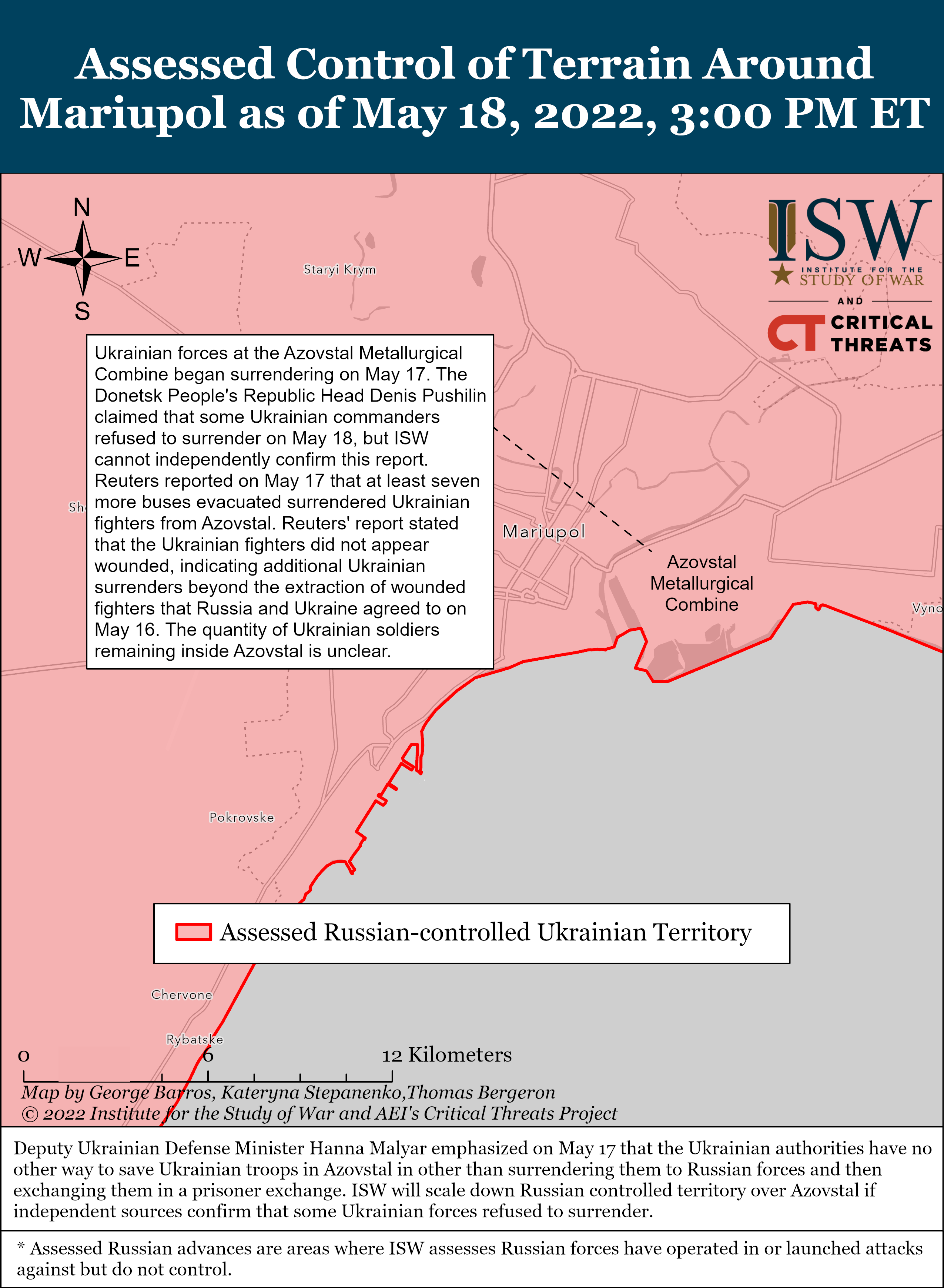 Russian forces continued efforts to prevent a further northward advance of the on-going Ukrainian counteroffensive around Kharkiv City on May 18. The Ukrainian General Staff stated that Ukrainian troops took control of Dementievka, about 10 kilometers south of Russian border, and that Russian forces are fighting in Ternova, 5 kilometers south of the Russian border.[26] Russian forces additionally shelled the northern part of Kharkiv City, indicating that they still have control of the highway to Belgorod in a manner than allows them to inflict artillery damage on the northern suburbs of Kharkiv despite pressure generated by the Ukrainian counteroffensive.[27] Russian troops north of Kharkiv City will likely continue to prioritize holding positions in Ukraine away from the international border at the expense of deploying additional reinforcements to Donbas. 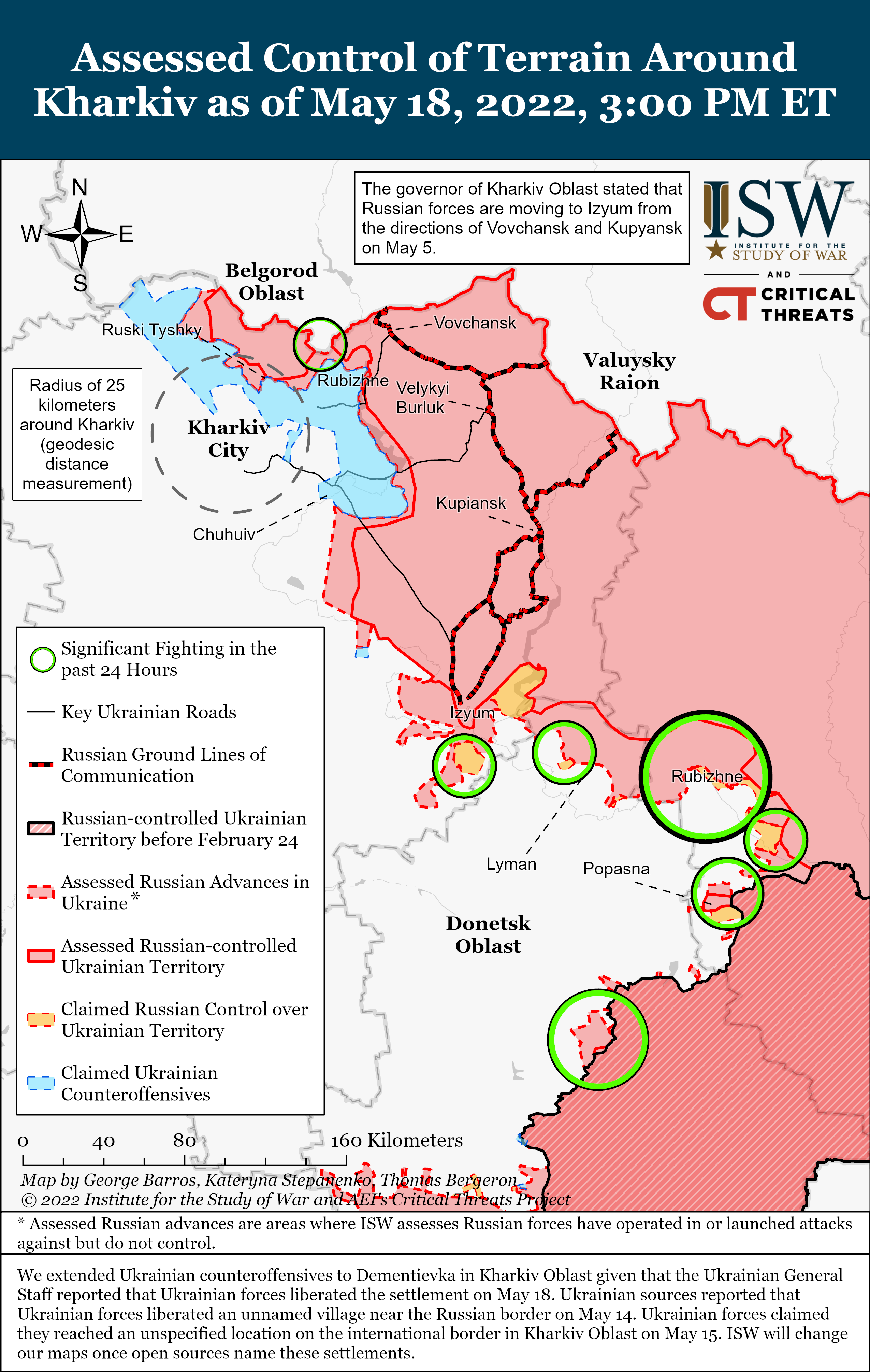 Russian forces did not conduct any ground assaults in southern Ukraine and carried out shelling and reconnaissance of Ukrainian positions.[28] The Zaporizhia Oblast Military Administration noted that Russian forces began reinforcing troops for an offensive from the southeast on Orikhiv—a settlement approximately 80 kilometers from Zaporizhia City.[29] The Ukrainian Southern Operational Command reported that Russian forces are fortifying in depth in Kherson and Mykolaiv Oblasts.[30] Ukrainian forces reportedly destroyed two Russian ammunition depots in northern Kherson Oblast on May 17, including one near Chornobaivka just north of Kherson City, according to the Ukrainian Southern Operational Command.[31] Russian forces launched missile strikes on Odesa and Mykolaiv Oblasts on May 18.[32] The situation in Transnistria did not change.[33] 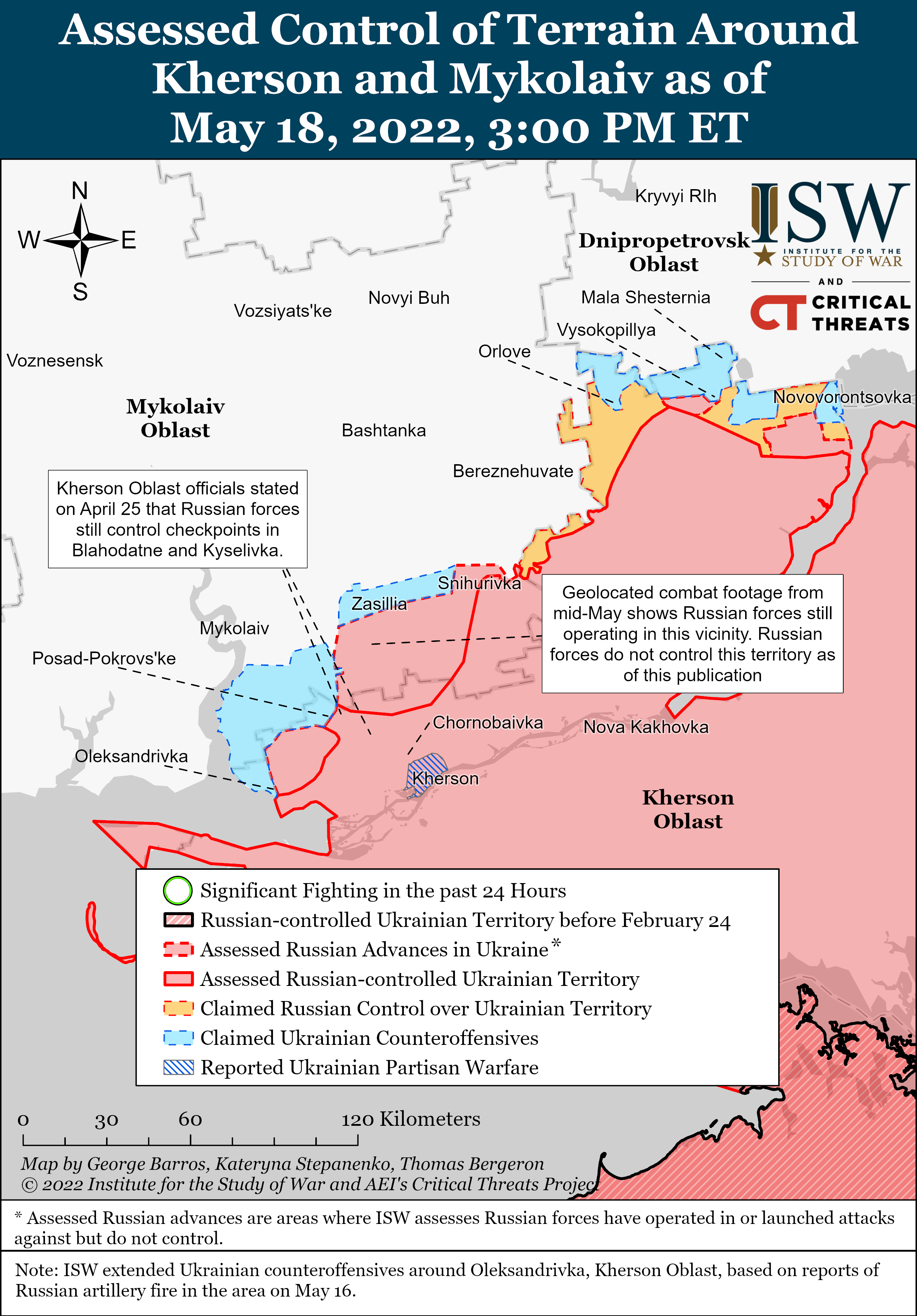