Russian forces are continuing to suffer shortages of reserve manpower, causing the Russian military command to consolidate depleted battalion tactical groups (BTGs). An unnamed US defense official reported that Russian forces still have 106 BTGs operating in Ukraine but had to disband and combine some to compensate for losses.[3] Ukrainian General Staff Main Operations Deputy Chief Oleksiy Gromov reported that Russian forces are combining units of the Pacific and Northern Fleets at the permanent locations of the 40th Separate Marine Brigade and the 200th Separate Motorized Rifle Brigade, respectively.[4] Gromov added that Russian forces are training servicemen in Krasnodar Krai to replenish units of the 49th Combined Arms Army and are trying to restore combat power of Russian units withdrawn from the battlefront in occupied Crimea. 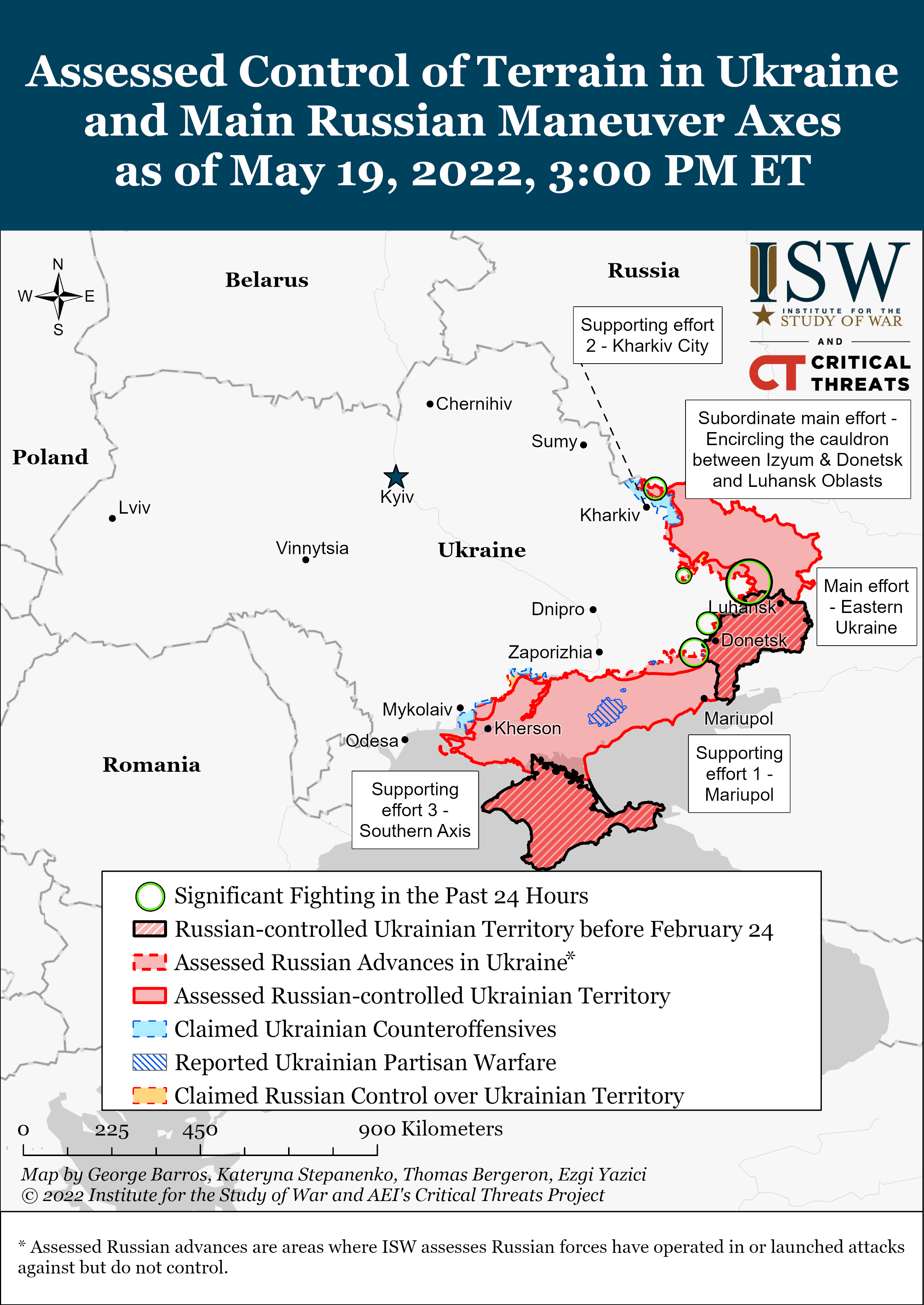 ISW has updated its assessment of the four primary efforts Russian forces are engaged in at this time.  We have stopped coverage of supporting effort 4, “Sumy and northeastern Ukraine,” because it is no longer an active effort.

Russian forces unsuccessfully attempted to resume offensive operations southwest of Izyum and did not advance in the Slovyansk or Lyman directions on May 19.[8] The Ukrainian General Staff reported that Russian forces suffered significant losses and retreated after a failed assault on Velyka Komyshuvakha approximately 23 km southwest of Izyum.[9] Ukrainian General Staff Main Operations Deputy Chief Oleksiy Gromov said that Russian forces are resuming the Slovyansk offensive despite the loss of offensive capabilities.[10] Ukrainian artillery struck Russian electronic warfare (EW) equipment 7 km from Izyum on May 18.[11]

Russian forces intensified efforts to advance north and west of Popasna in preparation for the Battle of Severodonetsk. Ukrainian officials reported that Russian forces conducted several unsuccessful assaults in settlements leading to the Lysychansk and Bahmut highways near Popasna.[12] The Luhansk People’s Republic (LNR) claimed to have encircled Ukrainian troops in Zolote and Hirske, approximately 12 and 14 km northeast of Popasna, respectively.[13] ISW cannot independently confirm this LNR claim. Russian forces also attempted to break Ukrainian defenses west and east of Avdiivka without any success and maintained heavy shelling in the area.[14]

Russian troops have begun operating at a company scale rather than at the level of a BTG to focus on seizing specific villages in Donbas, according to US officials.[15] An unnamed US defense official also noted that Russian forces are still facing challenges in coordinating communication between commanders and synchronizing artillery fire in supporting ground assaults.[16] ISW previously reported that some Russian military bloggers criticized the Russian reconnaissance-strike complex due to its excessively centralized approval system for artillery fire.[17] A pro-Russian military Telegram channel criticized the current Russian strategy, claiming that Russian forces are hitting a “strategic dead end” and are suffering significant losses trying to slowly capture small villages in different directions.[18] 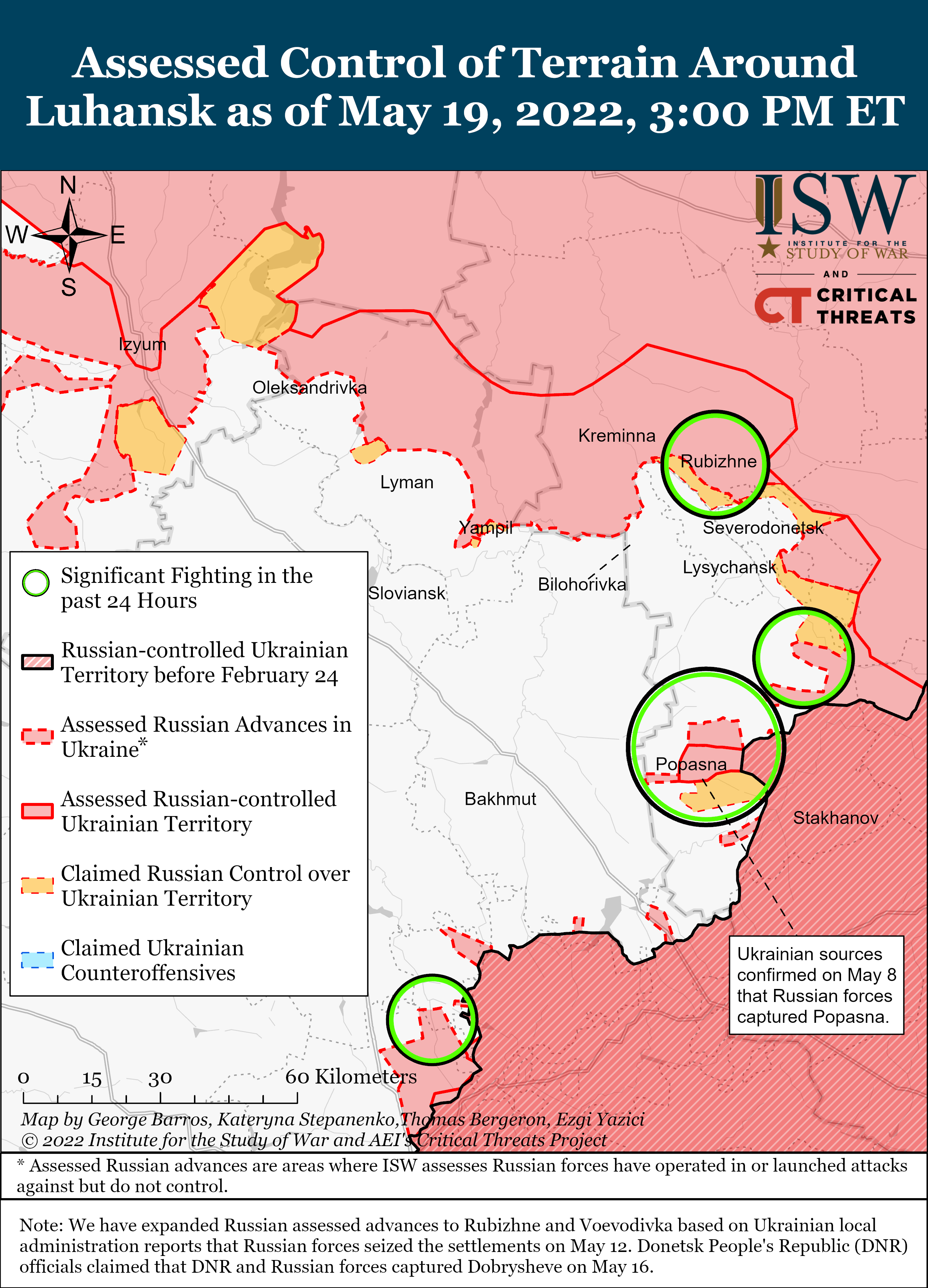 Russian and proxy occupation authorities in Mariupol reportedly struggled to establish coherent administrative control of the city on May 19. Advisor to the Mayor of Mariupol Petro Andyrushchenko claimed that authorities in Mariupol who are collaborating with Russian occupiers do not report to the leadership of the Donetsk People’s Republic (DNR) and instead are being guided by the Russian Federal Security Service (FSB). [19] Andryushchenko additionally stated that the Luhansk People’s Republic (LNR) will become the only “independent” political organ of Russia due to the way DNR officials are imposing their occupational agendas on Mariupol.[20] Andryushchenko noted that Head of the DNR Denis Pushilin has commanded elements of the police corps currently stationed in Mariupol to move to other areas in Donetsk to respond to riots caused by “an internal struggle of political clans.”[21] While ISW cannot independently confirm Andryushchenko’s claims, they are consistent with the overall lack of coherency in the implementation of occupation agendas by Russian and DNR authorities alike.

Factional infighting between proxy authorities in Mariupol is likely being exacerbated by the ongoing evacuation of Ukrainian defenders from the Azovstal Steel Plant. Pro-Russian Telegram channels complained that Russian forces are removing wounded Russian servicemen from hospitals in the DNR to treat wounded Ukrainian soldiers who were recently evacuated from Azovstal.[22] If confirmed, these reports indicate a continued lack of consistency in the way Russian and proxy authorities are handling the evacuation of Ukrainian forces from Azovstal and the overall capture of Mariupol. 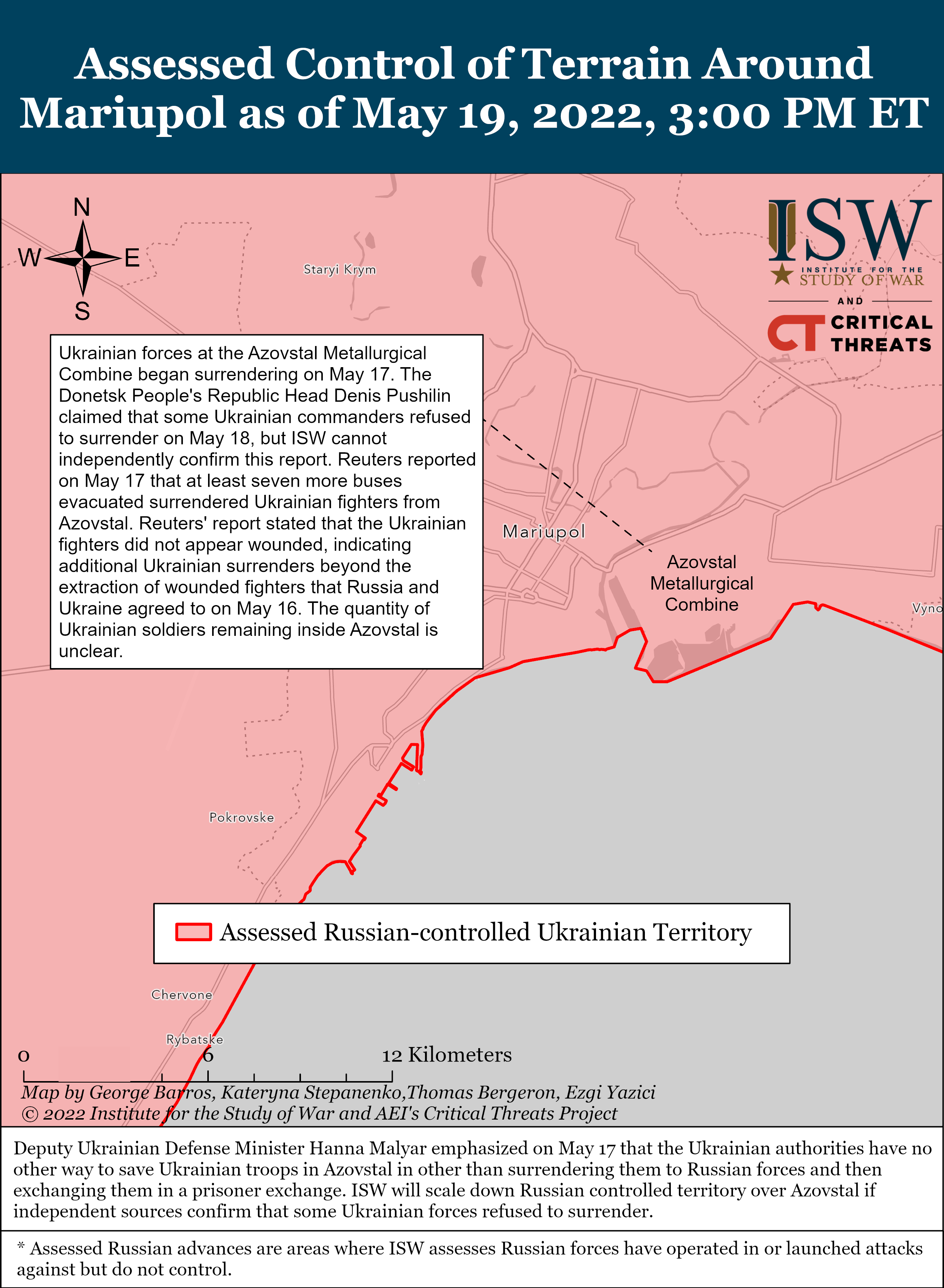 Russian forces focused on maintaining their positions north of Kharkiv City to prevent further Ukrainian advances on May 19.[23] The Ukrainian General Staff noted that Russian troops conducted unspecified and unsuccessful counterattacks in an attempt to restore lost positions around Kharkiv City.[24] Deputy Chief of the Main Operations Department of the Ukrainian General Staff Brigadier General Oleksiy Gromov reported that the Ukrainian counteroffensive in northern Kharkiv Oblast has liberated 23 settlements since May 5, but did not name the settlements.[25] Russian troops continued to conduct artillery attacks on Ukrainian positions and suburban settlements around Kharkiv City.[26] 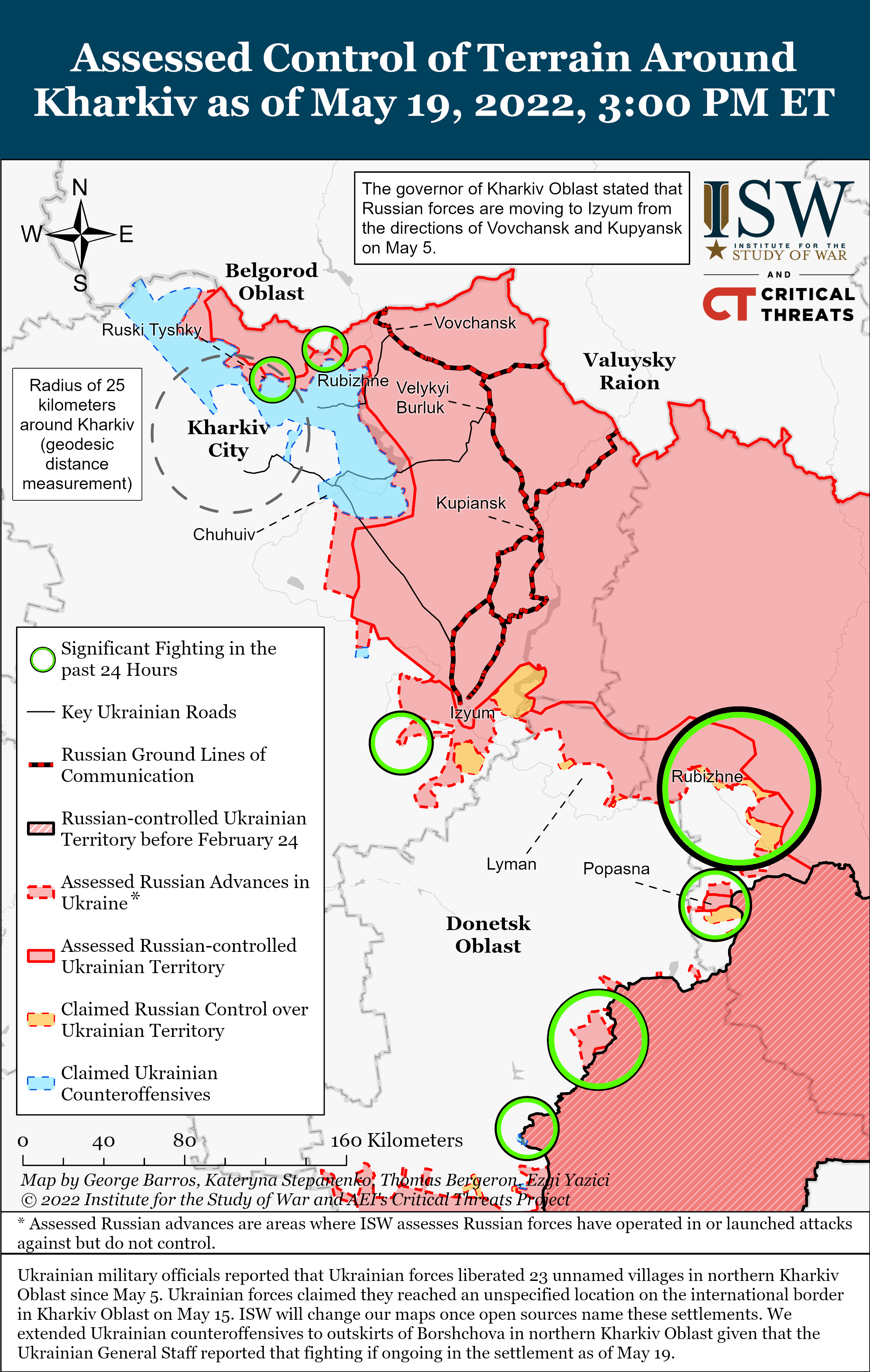 Russian forces did not make any confirmed advances on the southern axis and shelled along the frontline on May 19.[27] Russian forces conducted artillery attacks against Kherson, Zaporizhia, Dnipropetrovsk, and Mykolaiv Oblasts.[28] Unidentified partisans reportedly blew up a Russian armored train in Melitopol and damaged two railway tracks and a locomotive with ten fuel tanks.[29] Russian forces are continuing to fortify their grouping on Snake Island with two warship detachments and cruise missiles.[30] The situation in Transnistria remains unchanged. 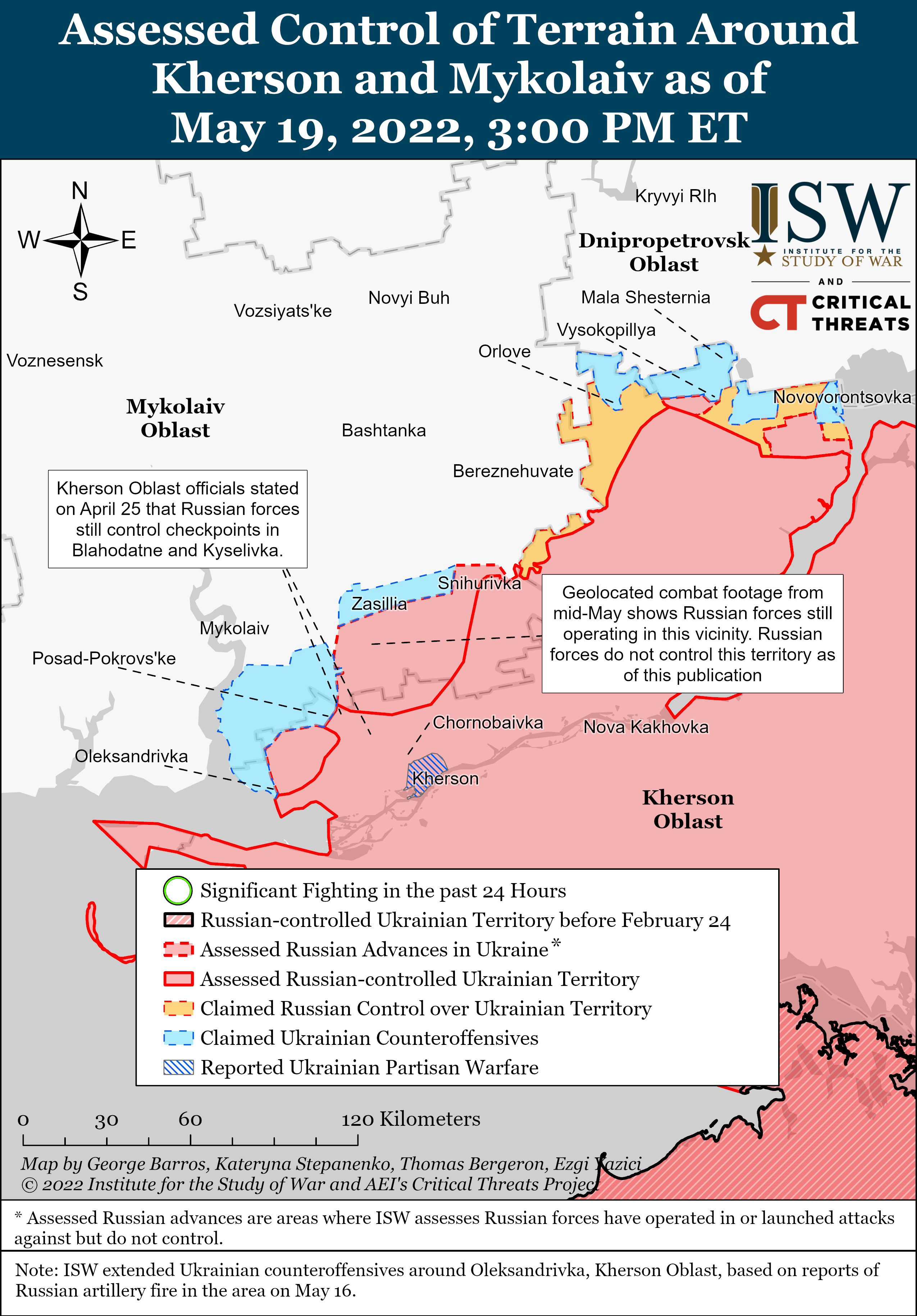