ISW is publishing an abbreviated campaign update today, November 13. This report discusses the likely evolution of the war following Ukraine’s operational success in regaining control of western Kherson Oblast. The Russians are not setting conditions for a relaxation of hostilities for the rest of the fall and into the winter but rather are launching a new offensive in Donetsk Oblast. The Ukrainians will likely use combat power recouped from the liberation of western Kherson to reinforce their ongoing counter-offensive in Luhansk Oblast or to open a new counter-offensive drive elsewhere. This is not the time to slow down aid or press for ceasefires or negotiations, but rather the time to help Ukraine take advantage of its momentum in conditions that favor Kyiv rather than Moscow.

Ukraine has won an important victory in the campaign that liberated western Kherson Oblast, culminating in the withdrawal of Russian forces completed on November 11.[1]  Russian President Vladimir Putin had been determined to hold this key terrain, possession of which would have allowed him to renew his invasion of unoccupied Ukraine from positions on the west bank of the Dnipro River. That consideration was likely more important in Putin‘s calculations than the symbolic value of retaining the only oblast capital his forces had seized since February 24, 2022. (Russia had already taken Luhansk City and Donetsk City in its 2014-2015 invasion.) Putin had committed substantial Russian forces to the defense of western Kherson, including many of the remaining elite airborne units available to the Russian military.[2]  He also committed reinforcements generated by the partial mobilization of reservists he had ordered on September 21.[3]  Those forces had dug in and fought hard to hold their ground, taking many losses. Ukraine’s success despite this Russian determination and allocation of scarce elite units is in many respects even more impressive than its victory in Kharkiv Oblast in mid-September.[4]

Ukraine’s success resulted in large part from the Ukrainian Armed Forces’ (UAF’s) innovative use of the US-provided HIMARS precision rocket system to disrupt Russian supply lines. The HIMARS munitions the US has given Ukraine are not suitable for destroying bridges—their warheads are too small and are not optimized for such strikes. The UAF developed a tactic to work around that limitation by conducting multiple precision strikes across the key Antonivskiy Bridge and the road that ran atop the Kakhovka Dam in such a way as to break the roadways in a line across them, rendering them unusable without actually destroying the bridges’ infrastructure (or badly damaging the dam).[5]  The UAF continued to strike the bridges as the Russians sought to repair them, targeting the repair equipment as well as the roadways until the Russians finally gave up. The Russians attempted to construct a pontoon bridge under the Antonivskiy Bridge as a mitigation, but the UAF attacked that effort as well, causing the Russians to abandon it.[6] The Russians were left at the end with barges ferrying supplies, equipment, and reinforcements from the east to the west bank.[7]  The UAF attacked the barges and landing areas as well, but the ferry system was in any case insufficient to supply the 20,000-some Russian mechanized troops trying to hold their lodgment on the western bank of the river.[8]

It was clear that the Russians would be unable to defend that lodgment by the time Russian Army General Sergey Surovikin took command of the Russian invasion of Ukraine on October 8.[9]  Surovikin signaled his intention to withdraw from western Kherson almost immediately and likely began setting conditions to retreat within a couple of weeks.[10]  It is not clear whether Putin authorized Surovikin to abandon western Kherson fully at that time or whether Surovikin had to continue working to persuade Putin of the hopelessness of any effort to hold on in western Kherson. However that may be, Russian Defense Minister Sergey Shoigu met with Surovikin on November 9 in a staged, public setting and ordered him to withdraw, which Surovikin promptly did.[11]

Putin likely elevated Surovikin and let him withdraw from western Kherson on condition that he take the rest of Donetsk Oblast using Russian forces recouped from western Kherson as well as newly-arriving mobilized servicemen.[12] This observation offered by Andriy Zagorodnyuk, chairman of the Ukrainian Center of Defense Strategies, is the likeliest explanation for the resumption in the intensity of Russian offensive operations first around Bakhmut and then to the southwest around the Vuhledar area that began on October 28.[13] These offensive efforts otherwise make little operational sense. They are far from operationally significant locations apart from Bakhmut and were launched during a difficult muddy time by inadequately prepared mobilized servicemen before Russian commanders in the area had amassed enough combat power for decisive operations.[14] Surovikin likely ordered them to start when they did as an earnest sign of his commitment to Putin.

Russian offensive operations in Donetsk Oblast will intensify in the coming weeks as additional mobilized servicemen arrive along with forces withdrawn from western Kherson. Ukrainian forces in the area will find themselves hard-pressed, and Kyiv will very likely have to divert troops to defend against these renewed Russian offensives. The Russians are not likely to make operationally significant gains despite their renewed efforts, although they could conceivably take Bakhmut over time at enormous cost. Russian mobilized servicemen have shown themselves to be inadequately trained, poorly equipped, and very reluctant to fight.[15] They are not arriving in cohesive units but rather are being sent largely as individual or small unit replacements to units that have been fighting without rest for nine months, have suffered devastating losses in men and equipment, and are largely demoralized themselves.

Russian forces operating in Donetsk Oblast include conventional units of the regular Russian Armed Forces, mobilized servicemen, Wagner Private Military Company troops, BARS (Russian volunteer reserve) formations, militia units from the Donetsk and Luhansk People’s Republics, soldiers from Ramzan Kadyrov’s Chechen units, and volunteer battalions.[16]  This bizarre congeries of combat forces will have considerably less effective combat power than would a grouping of regular units of similar size. It is extremely unlikely that Surovikin will be able to forge it into a force able to conduct large-scale offensive mechanized maneuver warfare, particularly since he is not even taking (or being allowed to take) the time to build a coherent strike force before hurling it into the attack. This weird mix of forces will likely make some gains through sheer weight of numbers, but Ukrainian defenders, likely reinforced, will most probably force it to a halt over the next few months not far from its starting points.

Ukraine will also likely recoup combat power from western Kherson and redeploy it to other areas for both defensive and counter-offensive operations. The UAF could conceivably try to chase the Russians across the Dnipro River at various points but is unlikely to do so because the logistics of supporting a Ukrainian lodgment on the eastern bank are very daunting. The UAF is therefore more likely to consolidate its control of the western bank, leave enough force to deter any Russian attempt to cross the river again, and reallocate forces to other areas. The Russian offensive in Donetsk Oblast will likely require the UAF to divert some forces to defend in that area, but the UAF will likely send at least part of the recouped combat power either to reinforce its ongoing counter-offensive in Luhansk Oblast or to open another counter-offensive somewhere else (we will not speculate about where that might be).

Ukrainian forces have continued to make limited gains in Luhansk Oblast and will likely be able to make more gains if they are reinforced by troops from western Kherson. The Russians are also reinforcing their defensive positions in Luhansk Oblast, to be sure, but the UAF has been grinding forward nevertheless, and there is no reason to forecast that the ill-trained, ill-equipped, and low-morale Russian reservists will be able to stop Ukrainian troops, buoyed by their victories, from advancing.

A cessation or prolonged slowing of combat operations over the next few months is therefore very unlikely. The Russians are emphatically not attempting to establish and strengthen defensive positions all along the line but are rather renewing offensive operations in Donetsk Oblast.[17] The Ukrainians will almost certainly continue their counter-offensive operations already underway. Both sides are already fighting in very muddy conditions. They will not likely stop fighting when winter freezes the ground and makes it even more conducive to large-scale mechanized maneuver warfare. Combat is more likely to intensify than to slacken as temperatures drop.

Any attempt at a ceasefire or cessation of hostilities at this time would overwhelmingly favor Russia. Putin should desire such a ceasefire in his own interest. He should recognize that he needs to give his forces time to recover and allow the reservists flowing into the theater time to integrate into their units, train up, and prepare for serious combat. He should want to stop the Ukrainians from capitalizing on the emotional lift of their recent victories. The fact that Putin continues to whip his generals to offensives in these circumstances is thus a grave error from a military perspective. It likely results from whatever psychological factors led Putin to order the invasion in the first place but also increasingly from Putin’s need to show his toughness to the hardline faction led, at least in public, by Wagner financier Yevgeny Prigozhin. Putin is unlikely to be willing to seek a ceasefire, therefore, unless it is accompanied by tremendous Ukrainian or international concessions.

Napoleon famously quipped:  Never interrupt your enemy whilst he is in the midst of making a mistake. That aphorism has never been truer—Ukraine and its backers should take advantage of Putin’s error by continuing to press the counter-offensive in circumstances far more favorable to Kyiv than to Moscow.

Ukraine has by no means liberated the minimum territory essential to its future security and economic survival even with the victory in western Kherson, finally. The city of Melitopol and surrounding areas, the Zaporizhzhia Nuclear Power Plant, land on the east bank of the lower Dnipro River, and territory in Donetsk and Luhansk oblasts are all vital terrain for Ukraine, as ISW has previously argued.[18]  Discussions about the future of Crimea and other Ukrainian lands illegally occupied by Russia after 2014 are premature. Ukraine must liberate tens of thousands of square kilometers short of those areas if it is to be able to defend itself against future Russian attacks and reestablish a functional economy.

Ukrainians and the West must bend every effort toward enabling the liberation of those lands as rapidly as possible before worrying about what lies beyond them. Momentum is an important factor in war. Ukraine has it now. Kyiv and its partners must make the most of it. 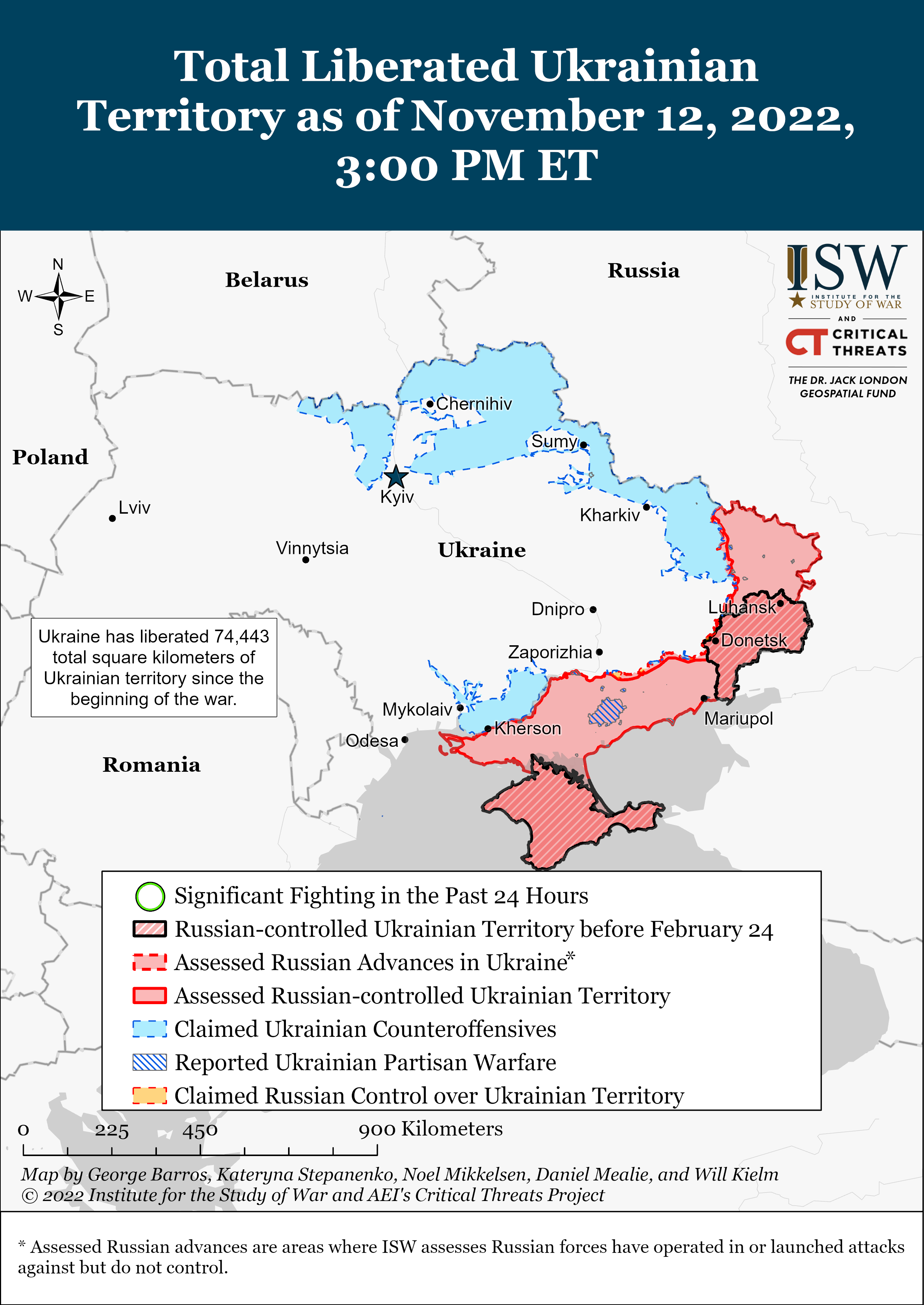 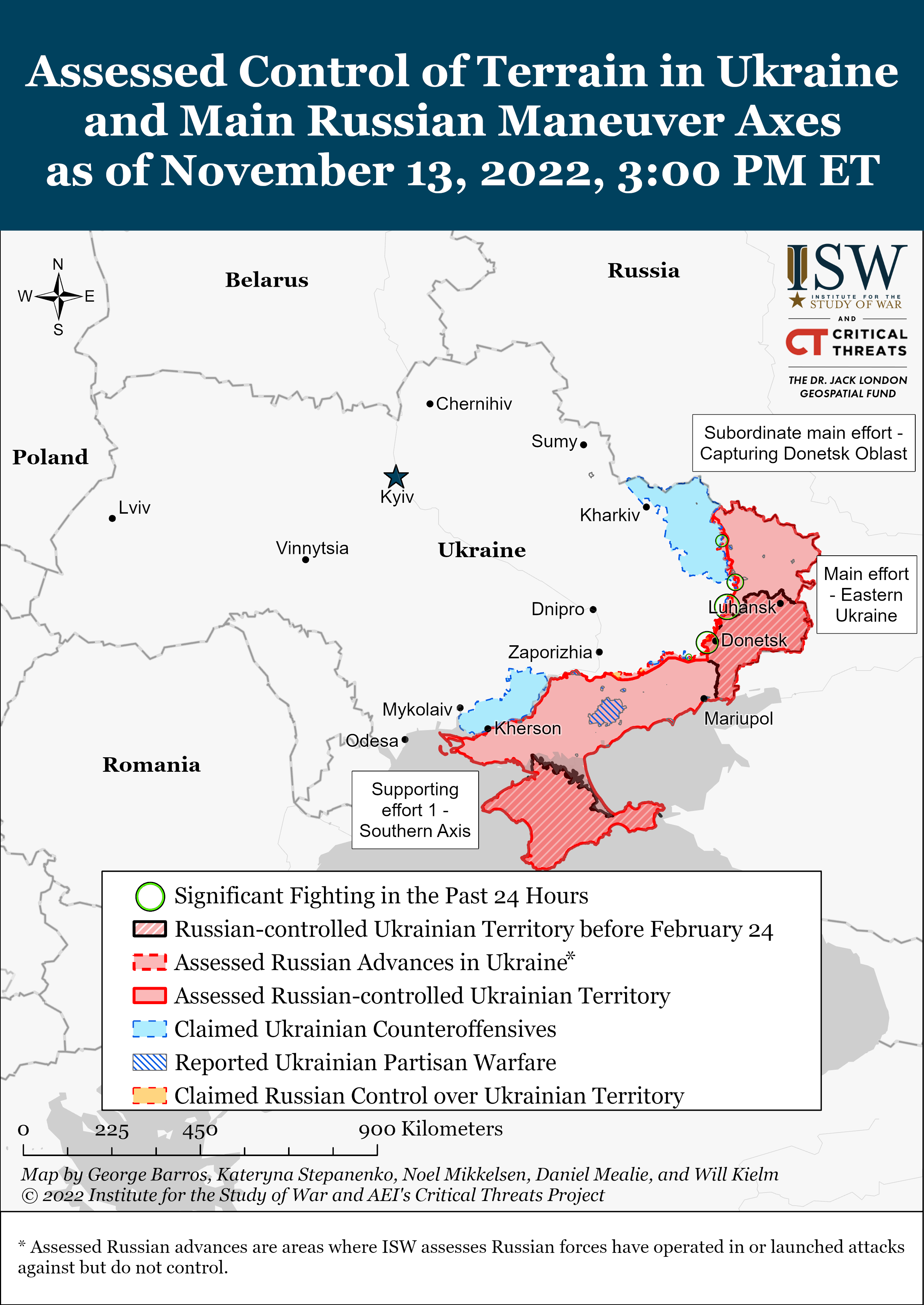 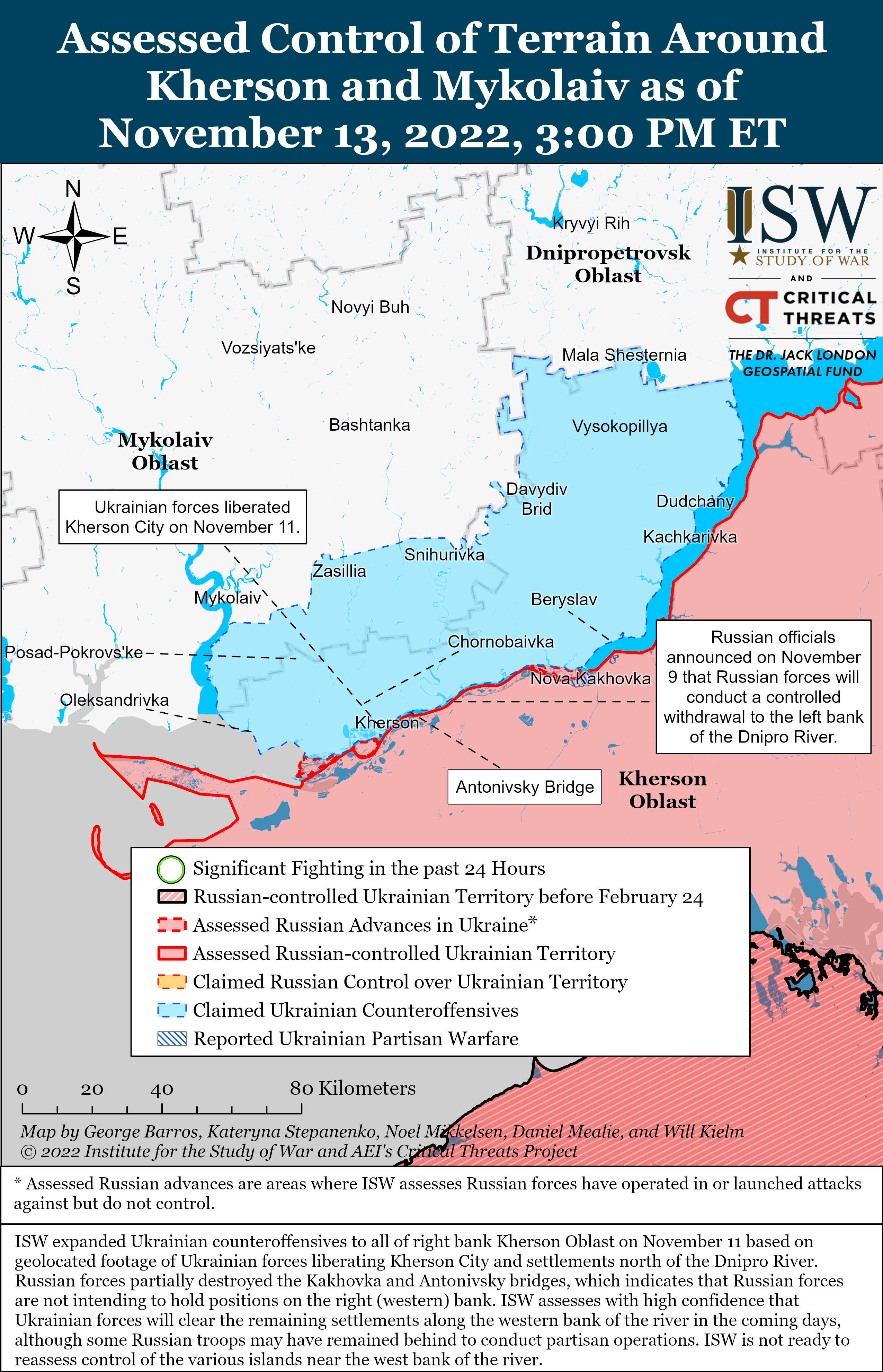 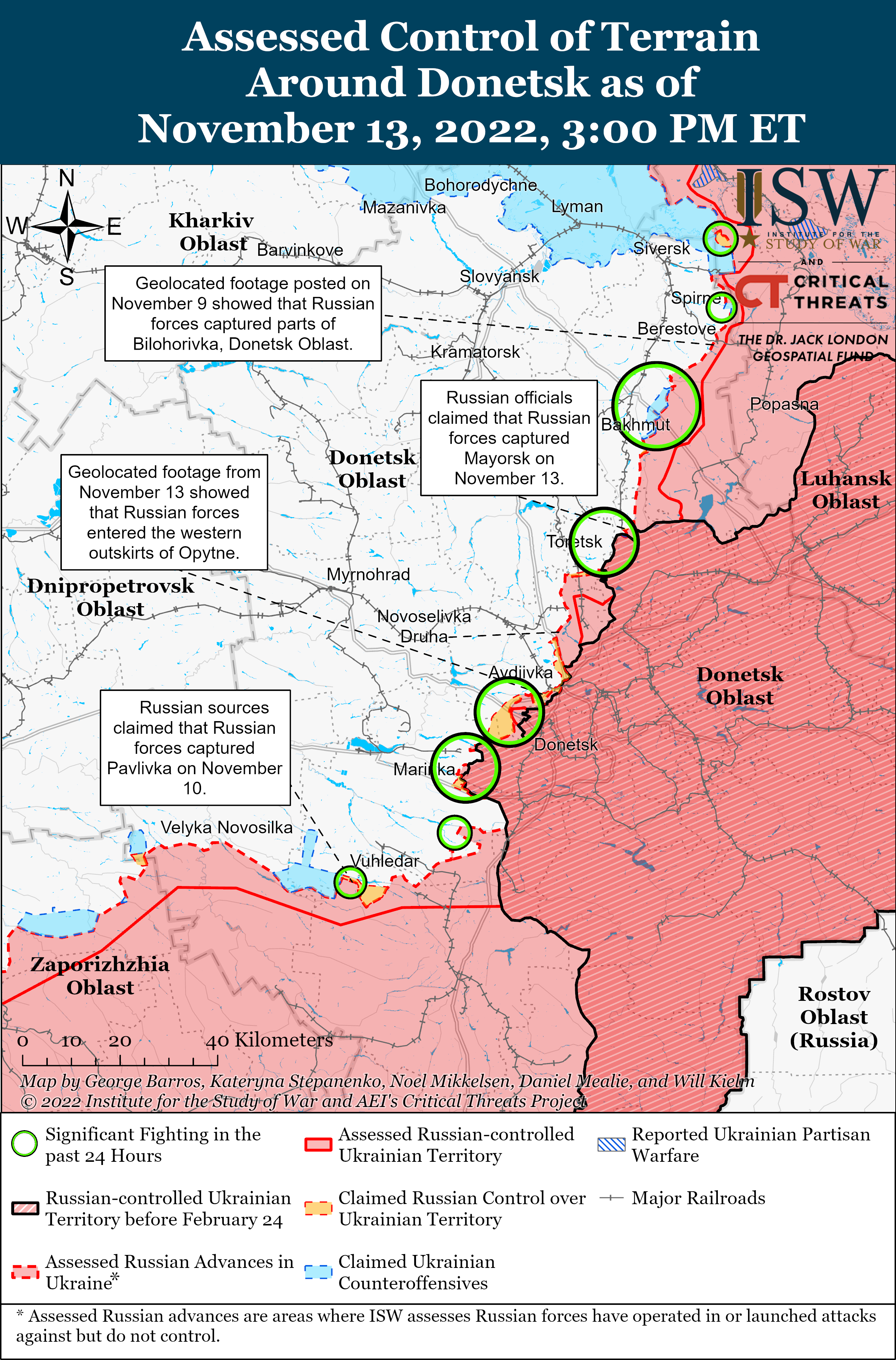 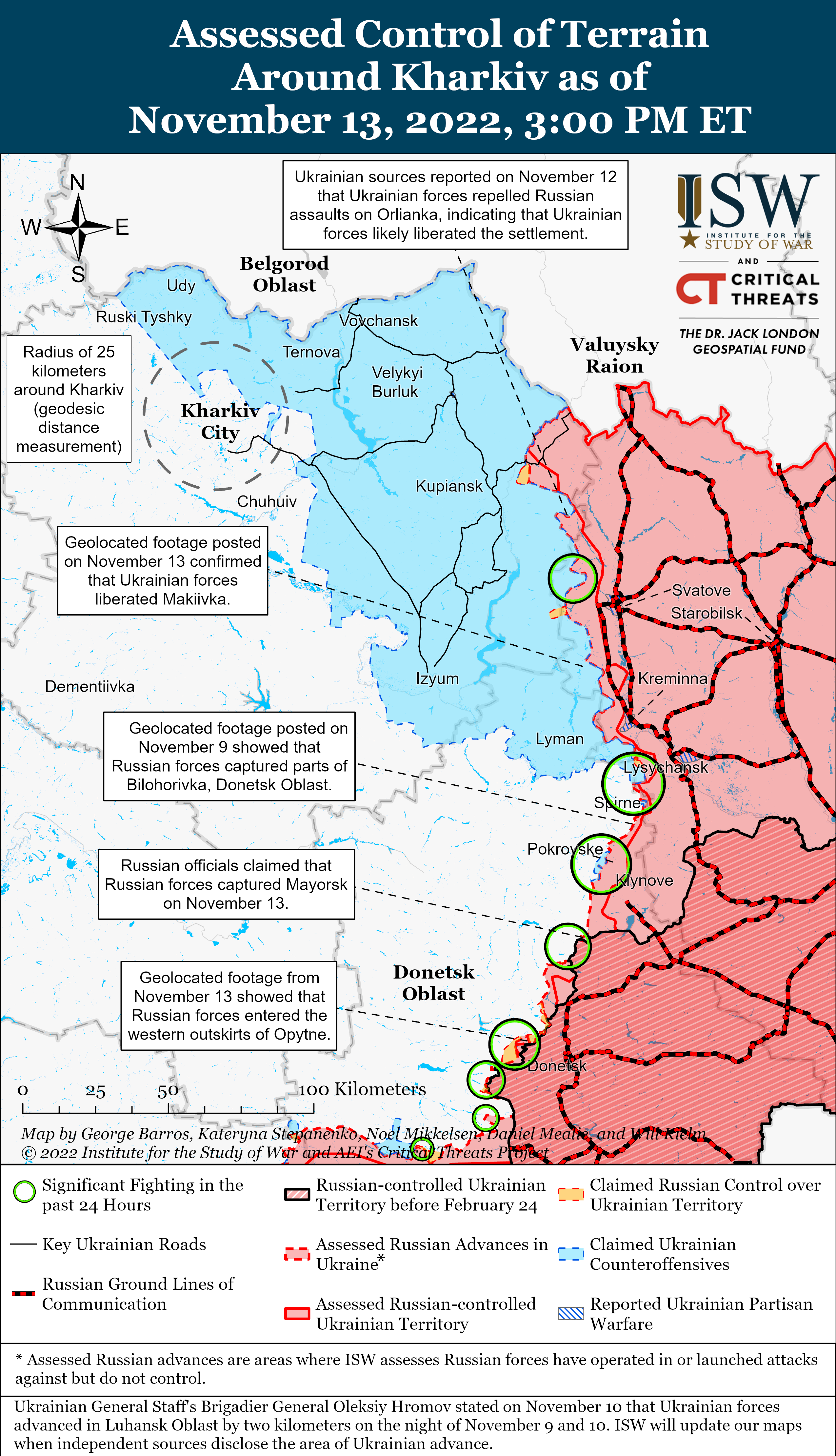