Click here to see ISW’s interactive map of the Russian invasion of Ukraine. This map is updated daily alongside the static maps present in this report.­­­­­ ­

Ukraine’s southern counteroffensive is continuing to have significant impacts on Russian morale and military capabilities in southern Ukraine. Satellite imagery of known Russian positions in Kyselivka, 15km northwest of Kherson City, shows that all but four Russian vehicles have departed from previous forward positions, consistent with rumors that Donetsk People’s Republic (DNR) troops have abandoned Kyselivka and moved back towards the Dnipro River.[1] Kyselivka is an operationally significant location for Russian forces around Kherson City because it is the last major settlement along both the E58 highway and a railway line between current Ukrainian positions and Chornobaivka, the outermost part of Kherson City. The apparent withdrawal of Russian troops from this position may compromise the Russians’ ability to defend the northwestern outskirts of Kherson City and suggests that Russian troops in this area perceive an imminent threat to their positions. Spokesperson for Ukraine’s Southern Operational Command, Natalya Humenyuk, stated on September 12 that Russian forces located along the right bank of the Dnipro River in Kherson Oblast are attempting to negotiate for surrender under the auspices of international law.[2] Ukrainian operations in Kharkiv Oblast are unlikely to have had such a dramatic psychological effect on Russian troops this far south, and both the withdrawal of troops from forward positions in Kyselivka and reports of surrender negotiations are indicators that Ukrainian counteroffensives in the south are progressing in a significant way, even if visibility on this axis is limited by the shift in focus to Kharkiv.

The success of recent Ukrainian counteroffensive operations may be impacting the will or ability of the Russian military command to use newly formed volunteer units in Ukraine in a timely fashion. The Ukrainian General Staff reported that the Russian military command has suspended sending new, already-formed units to Ukraine due to recent Russian losses and widespread distrust of the Russian military command, factors which have caused a large number of volunteers to categorically refuse to participate in combat.[3] This assessment is still unconfirmed, but low morale due to Ukrainian counteroffensive success may prove devastating to the Kremlin’s already-poor ability to generate meaningful combat capability. The deployment of these newly formed units to reinforce defensive lines against Ukrainian counteroffensives would be an operationally-sound decision on the part of Russian military leadership; and the delay or potential suspension of these deployments will afford Ukrainian troops time to consolidate and then resume the offensive, should they choose to do so, without having to face newly arrived and fresh (albeit undertrained and understrength) units. 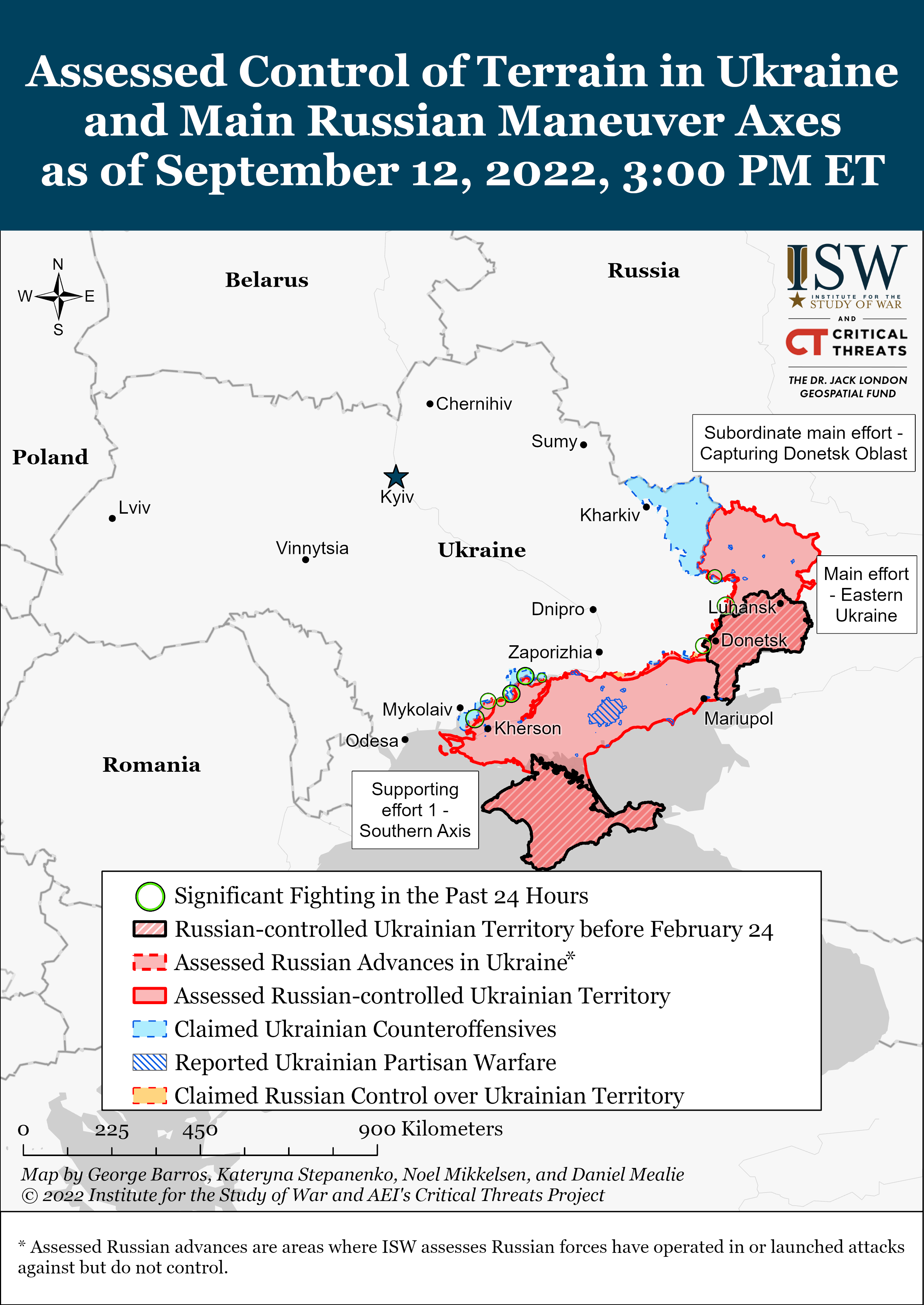 Russian sources claimed that the front has largely stabilized at the Oskil River, which runs just west of the Kharkiv-Luhansk Oblast border.[8] Russian milbloggers reported that Ukrainian and Russian forces are fighting around Lyman, but that Lyman remains under the control of Russian and proxy forces.[9] Some Russian sources also voiced concerns that Ukrainian troops are trying to cross the Siverskyi Donets River around Zakitne (about 15km southeast of Lyman) to take back Yampil.[10] Russian sources are seemingly focused on the Lyman-Yampil line as the next potential target for Ukrainian advances.

Russian forces are failing to reinforce the new frontline following Ukrainian gains in eastern Kharkiv Oblast and are actively fleeing the area or redeploying to other axes. Ukrainian sources claimed that all Russian forces have left Svatove, Luhansk Oblast (about 45km east of current Ukrainian positions along the Oskil River), and that only militia elements of the Luhansk People’s Republic (LNR)—possibly locals—remain in Svatove.[11] Social media footage shows lines of cars stretching for kilometers near Schastia and Stanysia Luhanska, which are both along the border of long-held LNR territory and close to the Russian border.[12] Russian forces and pro-Russian collaborators are likely experiencing the psychological pressure of rapid Ukrainian gains and seek to remove themselves from settlements near the new frontline that they perceive as vulnerable to Ukrainian advances. Certain proxy forces are also reportedly already redeploying from Kharkiv Oblast to southwestern Donetsk Oblast, indicating that the Russian command is not prioritizing reinforcing vulnerable positions east of the Oskil River.[13] 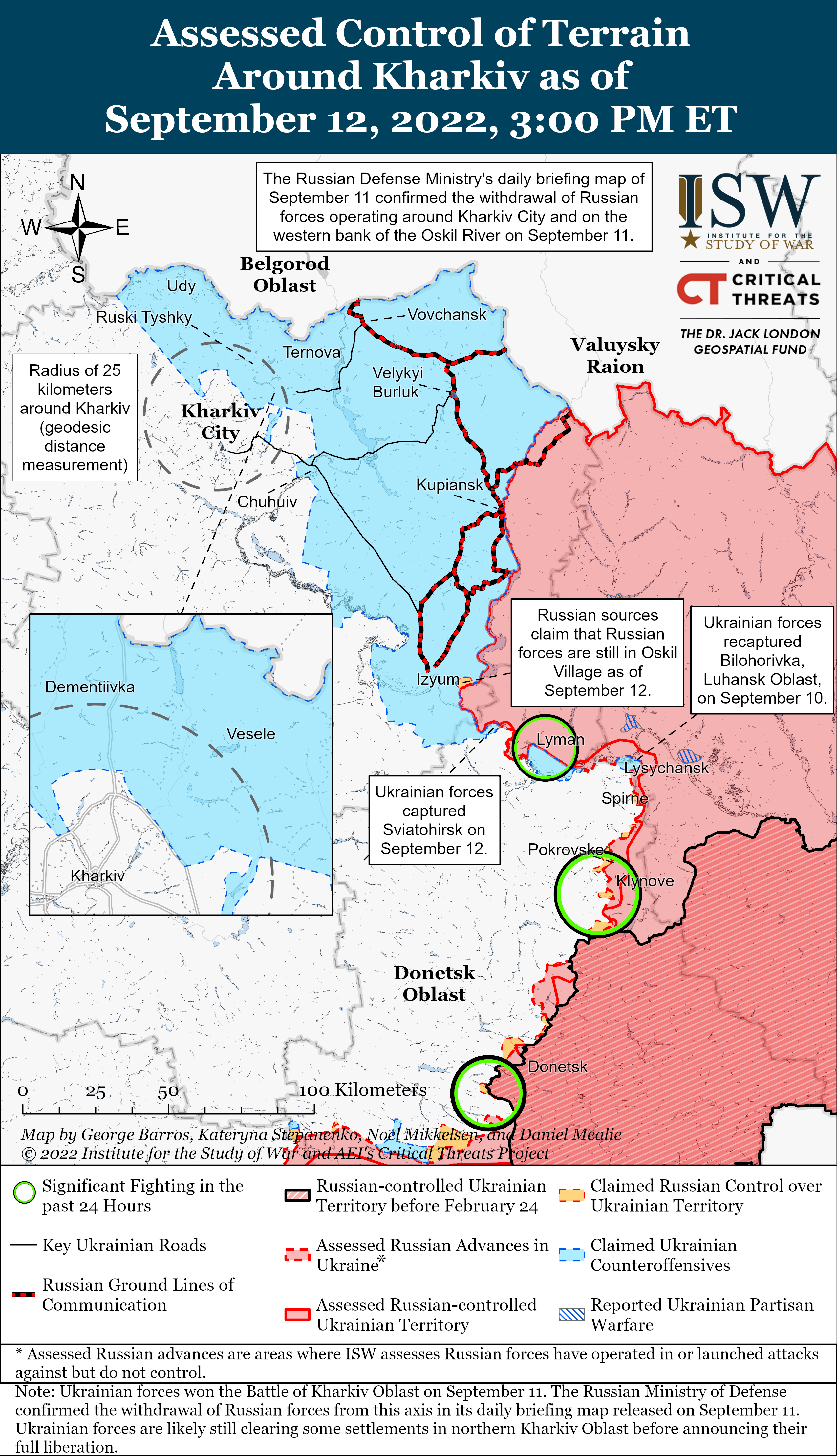 Ukrainian military officials emphasized on September 12 that Ukrainian troops are making tangible gains in Kherson Oblast. Ukraine’s Kakhovka Operational Group announced that Ukrainian forces have penetrated the front line at depths between 4 and 12km in unspecified areas, amounting to over 500 square kilometers of liberated territory.[14] The Kakhovka Group stated that Ukrainian troops have liberated 13 settlements, including Vysokopillya, Novovoznesenske, Bilohirka, Sukhyi Stavok, and Myrolubivka.[15] Ukrainian military officials also stated that Ukrainian troops are continuing an operational interdiction campaign and regularly striking Russian military, logistical, and transportation assets in southern Ukraine.[16] The Ukrainian General Staff reported that the Russian 810th Naval Infantry Brigade has lost more than 85% of its personnel and is now refusing to return to combat, suggesting that even brigade-level elements have suffered substantial losses as a result of the Ukrainian counteroffensive.[17]

Neither Russian nor Ukrainian sources discussed ground maneuvers along the Kherson-Mykolaiv frontline on September 12. Russian and Ukrainian sources discussed Russian indirect fire attacks on Ukrainian positions in northern and western Kherson Oblast, confirming that Ukrainian troops are holding recently recaptured positions near the Dnipropetrovsk Oblast border and near the Sukhyi Stavok pocket in western Kherson Oblast.[20] The Russian Ministry of Defense (MoD) continued to provide likely excessive figures for Ukrainian losses in Kherson Oblast but did not make any additional claims on September 12.[21] Russian sources are increasingly focused on providing commentary on Ukrainian advances in Kharkiv Oblast. 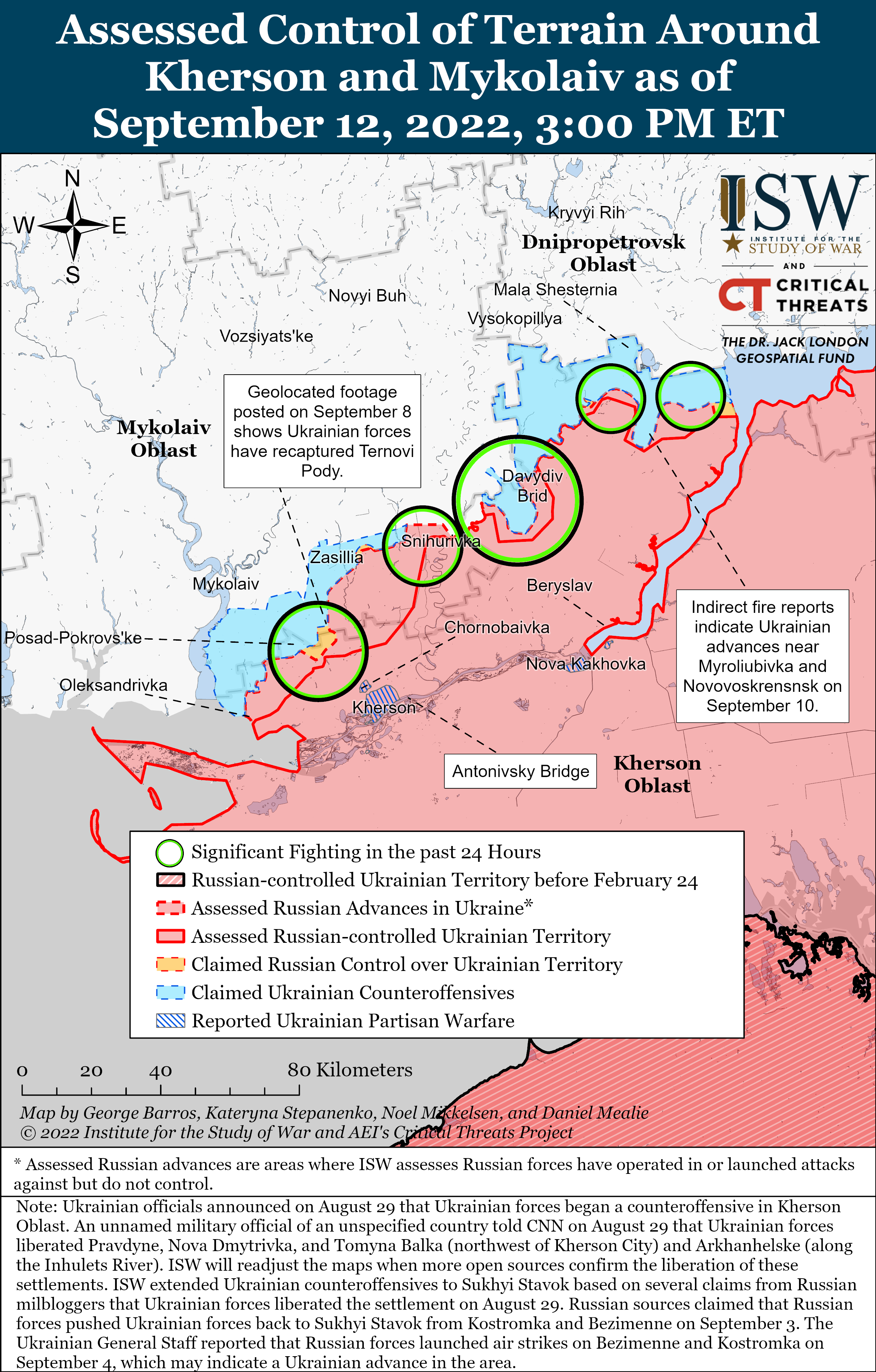 Russian forces continued ground attacks in Donetsk Oblast on September 12. The Ukrainian General Staff reported that Ukrainian forces repelled Russian ground assaults on various settlements around Bakhmut and Avdiivka.[24] The continued ground attacks in this area far from the counteroffensive frontlines are noteworthy because Central Military District Commander Colonel General Alexander Lapin was given responsibility for the western grouping of forces that had been in Kharkiv Oblast following the loss of most of that oblast to Ukrainian forces. Lapin has shown no indication that he intends to alter his ongoing limited offensive campaign despite suddenly receiving responsibility for a collapsing front. He appears instead determined to continue attacks that have no meaningful chance of securing operationally significant, let alone decisive, gains. Russian forces continued routine fire along the line of contact in Donetsk Oblast.[25] 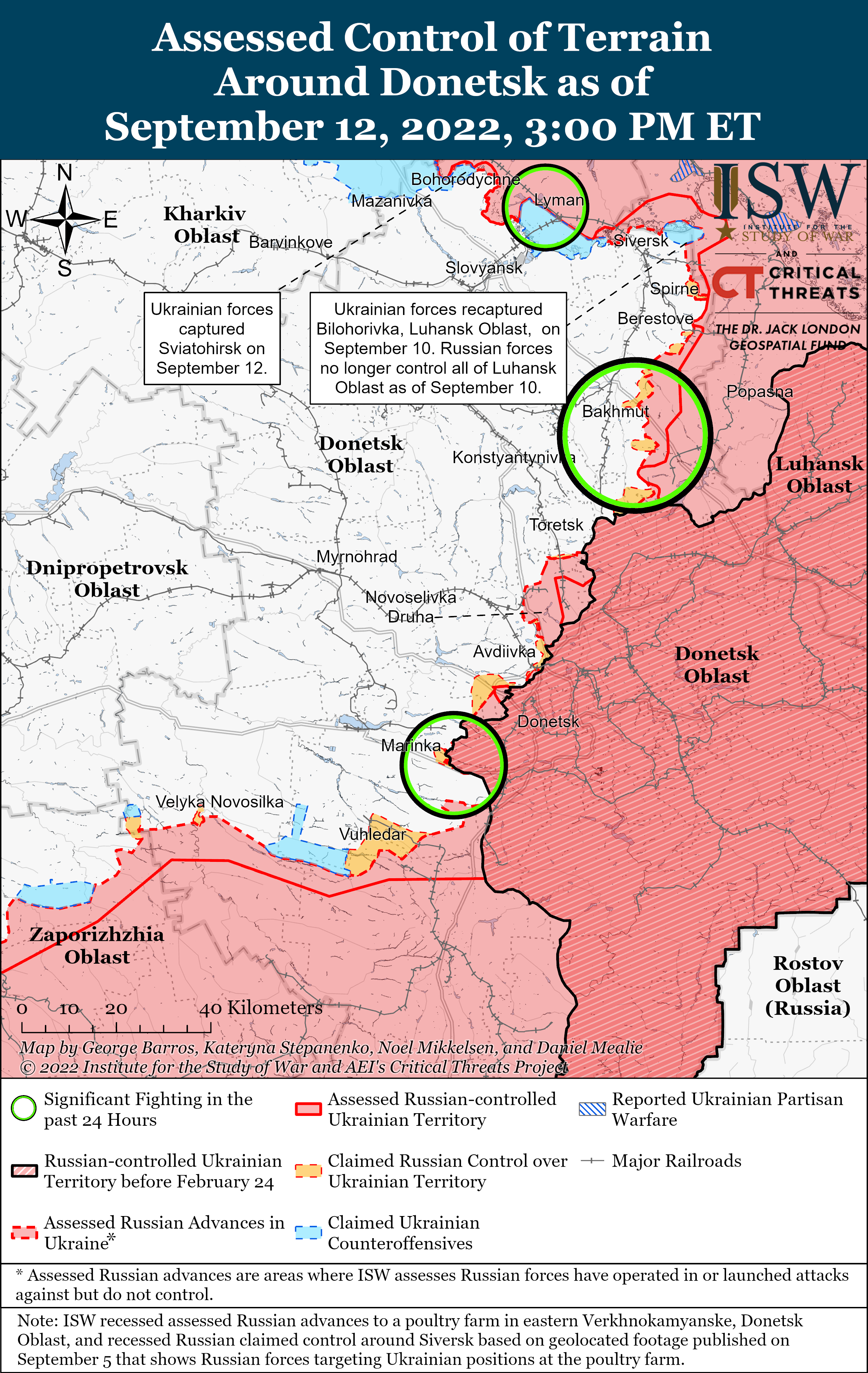 The International Atomic Energy Agency (IAEA) announced the restoration of the second reserve power transmission line to the Zaporizhzhia Nuclear Power Plant (ZNPP) on September 12.[31] The IAEA stated that this power transmission line allows Energoatom to keep one power line in reserve while the remaining line provides the ZNPP with necessary electricity to sustain essential safety operations during and after the cold shutdown.[32] The restoration of more power transmission lines to the ZNPP reestablishes safeguards that the Russian militarization and likely shelling of the ZNPP previously threatened or eliminated. Russian Zaporizhia Oblast occupation official Vladimir Rogov stated that ZNPP operations can restart after shelling ceases and the line of contact moves away from the plant, indicating that Russian officials likely hope to restart the plant and direct its energy production toward Russian grids in the future.[33] Russian officials have no formal authority to order the plant to start or to shut down and would likely have either to replace or coerce the Ukrainians operating the plant to restart it.

Ukraine’s sweeping counteroffensive is damaging Russian administrative capabilities and driving Russian departures from occupied parts of Ukraine far behind the line of contact. The Ukrainian Resistance Center reported on September 12 that Russian forces throughout occupied Kherson Oblast have restricted general freedom of movement, strengthened military checkpoints, and increased looting, particularly of motorcycles—all apparent signs of Russian desperation.[34] Russian forces may be looting mopeds and motorcycles to flee in the event of a military collapse. The Russian-backed head of occupied Crimea, Sergey Aksenov, claimed on September 12 that Russian FSB officers detained Ukrainian “terrorists” who were planning an attack on the Kherson Occupation Administration.[35] The Ukrainian Resistance Center also reported that Russian forces increased patrols and checkpoints around Mariupol on September 12 to thwart Ukrainian “sabotage.”[36]

The impacts of Ukrainian counteroffensives may reduce the likelihood that Russia will hold sham annexation referenda in occupied territories in the next month. The Center reported that “a number of” specialists remain in occupied Kherson, but that the Kremlin has put the referendum “on pause.” The Russian-appointed head of Zaporizhia Oblast, Evgeny Balitsky, claimed on September 12 that the Zaporizhia Occupation Administration would hold its annexation referendum “as soon as we are ready in terms of security.” Balitsky also claimed that 86% of Zaporizhia residents support Russian annexation of the oblast—indicating either that occupation officials are conducting fake public opinion polls to support their planned referendum, or that they have pre-ordained the results of the pseudo-referendum.[37]

The Ukrainian Resistance Center reported that Ukrainian forces will use facial recognition and other intelligence to identify Russian officials and Ukrainian collaborators in newly liberated Ukrainian territories. Ukrainian forces arrested the occupation administration head of the village of Ivanivka, Kharkiv Oblast on September 9 and the collaborationist chief of occupation police for Balakliya, Kharkiv Oblast by September 11 and plan to prosecute both officials.[38]