Russian-appointed occupation officials in Luhansk, Donetsk, Kherson, and Zaporizhia oblasts announced on September 20 that they will hold a “referendum” on acceding to Russia, with a vote taking place from September 23-27.[1] The Kremlin will use the falsified results of these sham referenda to illegally annex all Russian-occupied parts of Ukraine and is likely to declare unoccupied parts of Donetsk, Kherson, and Zaporizhia oblasts to be part of Russia as well.

The Kremlin’s annexation plans are primarily targeting a domestic audience; Putin likely hopes to improve Russian force generation capabilities by calling on the Russian people to volunteer for a war to “defend” newly claimed Russian territory. Putin and his advisors have apparently realized that current Russian forces are insufficient to conquer Ukraine and that efforts to build large forces quickly through voluntary mobilization are culminating short of the Russian military’s force requirements. Putin is therefore likely setting legal and informational conditions to improve Russian force generation without resorting to expanded conscription by changing the balance of carrots and sticks the Kremlin has been using to spur voluntary recruitment.

Putin may believe that he can appeal to Russian ethnonationalism and the defense of purportedly “Russian peoples” and claimed Russian land to generate additional volunteer forces. He may seek to rely on enhanced rhetoric in part because the Kremlin cannot afford the service incentives, like bonuses and employment benefits, that it has already promised Russian recruits.[2] But Putin is also adding new and harsher punishments in an effort to contain the risk of the collapse of Russian military units fighting in Ukraine and draft-dodging within Russia.  The Kremlin rushed the passage of a new law through the State Duma on September 20, circumventing normal parliamentary procedures.[3] This law codifies dramatically increased penalties for desertion, refusing conscription orders, and insubordination. It also criminalizes voluntary surrender and makes surrender a crime punishable by ten years in prison. The law notably does not order full-scale mobilization or broader conscription or make any preparations for such activities.

ISW has observed no evidence that the Kremlin is imminently intending to change its conscription practices. The Kremlin’s new law is about strengthening the Kremlin’s coercive volunteerism, or what Chechen leader Ramzan Kadyrov called “self-mobilization.”[4]

The Kremlin is taking steps to directly increase force generation through continued voluntary self-mobilization and an expansion of its legal authority to deploy Russian conscripts already with the force to fight in Ukraine.

Putin likely hopes that increasing self-mobilization, and cracking down on unwilling Russian forces, will enable him to take the rest of Donetsk and defend Russian-occupied parts of Luhansk, Kherson, and Zaporizhia oblasts. He is mistaken. Putin has neither the time nor the resources needed to generate effective combat power. But Putin will likely wait to see if these efforts are successful before either escalating further or blaming his loss on a scapegoat. His most likely scapegoat is Defense Minister Sergei Shoigu and the Russian Ministry of Defense.  Reports that Shoigu would accompany Putin while Putin gave a speech announced and then postponed on September 20 suggest that Putin intended to make Shoigu the face of the current effort.[12]

Russian President Vladimir Putin likely also intends to deter Ukraine’s ongoing counteroffensives by annexing occupied Ukrainian territory and framing Ukrainian attempts to liberate occupied territory as attacks on Russia. Russian officials and propagandists such as Russian Security Council Deputy Chairman Dmitry Medvedev issued vague warnings on September 20 that “the infringement of Russian territory is a crime; committing this crime permits using all means of self-defense.”[13] Russian officials are demonstrably panicked over Ukrainian advances, as ISW assessed on September 19.[14] The Kremlin likely intends these vague warnings to exacerbate Ukrainian and global fears of nuclear escalation. However, Putin has already declined to enforce any territory-specific redlines in response to Ukrainian attacks on Russian-annexed Crimea, occupied territory he has controlled for eight years and declares to be Russian.

Ukrainian and Western leaders responded to reports of the impending referenda with renewed declarations of commitment to restoring Ukrainian sovereignty over occupied Ukrainian territory.  Ukrainian Foreign Minister Dmytro Kuleba stated on September 20 that “sham ‘referendums’ will not change anything ... Ukraine has every right to liberate its territories and will keep liberating them whatever Russia has to say.”[15] NATO Secretary-General Jens Stoltenberg said on September 20 that “[sham referendums] will only further worsen the situation, and therefore we need to provide more support to Ukraine.”[16] US National Security Advisor Jake Sullivan said on September 20 that the United States “will never recognize this territory as anything other than a part of Ukraine” and will continue to provide “historic support” to Ukraine.[17] German Chancellor Olaf Scholz emphasized on September 19 that “Ukraine has every right to defend the sovereignty and integrity of its own territory and its own democracy.”[18] French President Emmanuel Macron called the sham referenda a “parody” and a “provocation.” 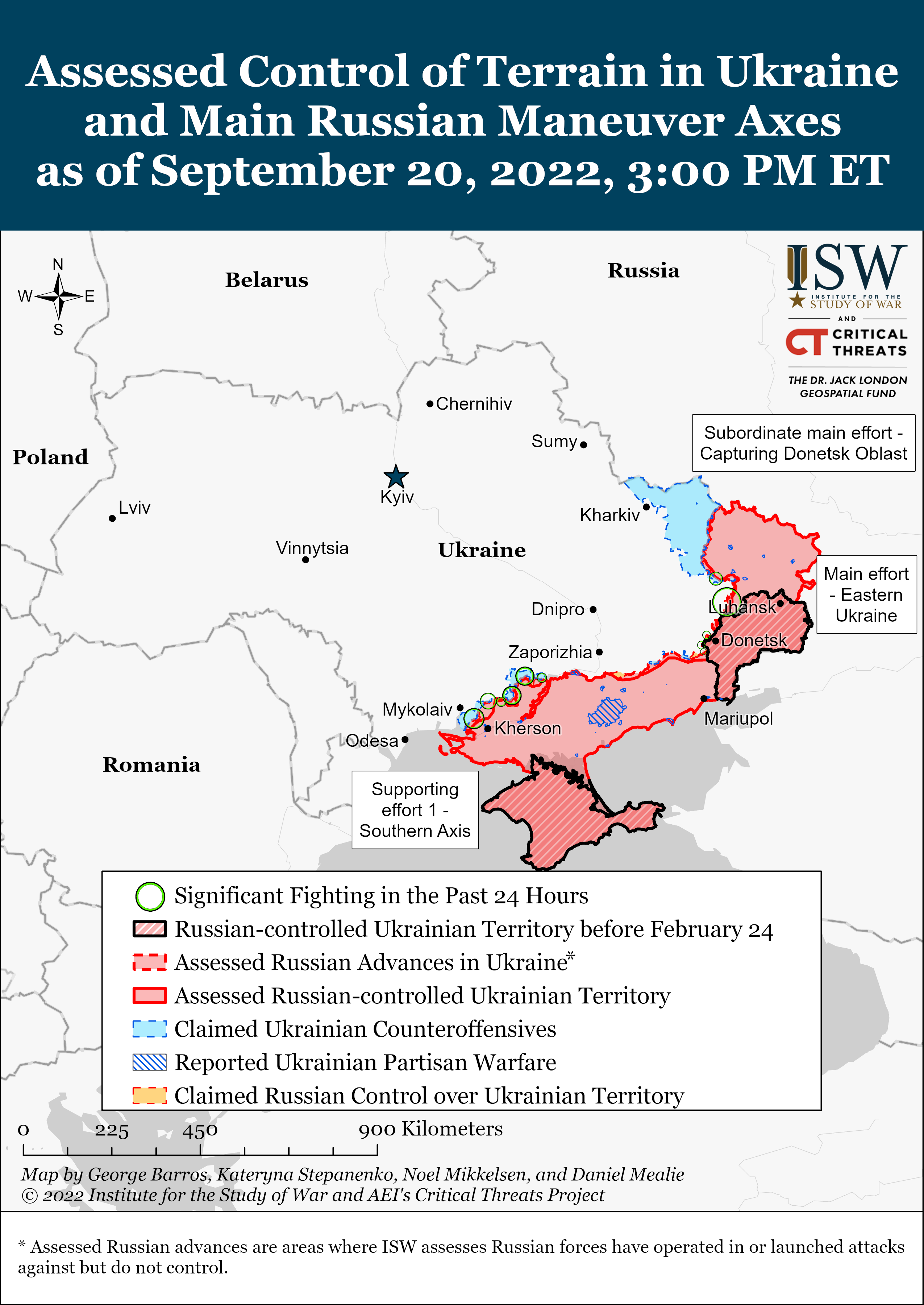 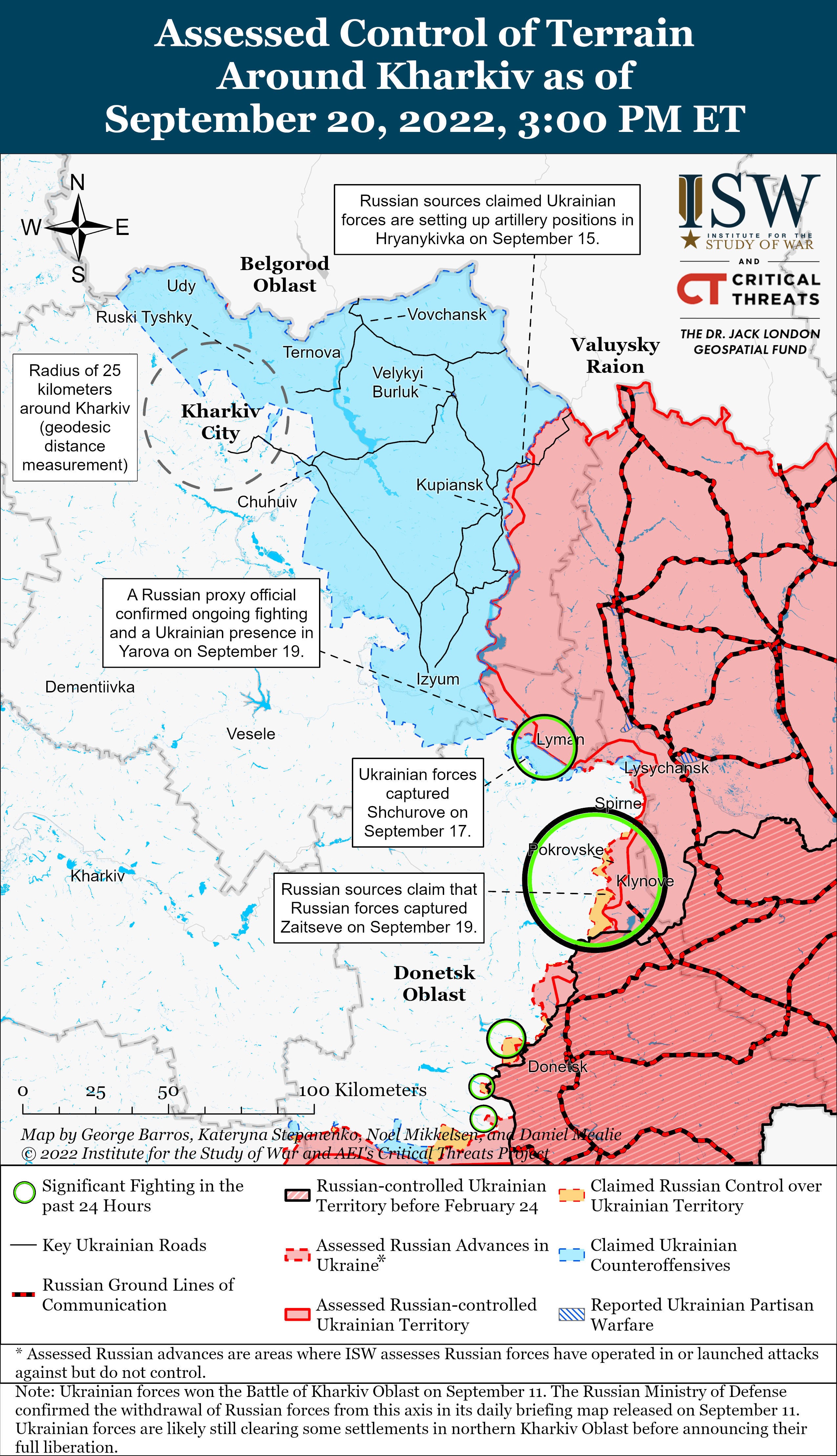 Ukrainian forces continued efforts to interdict Russian ground lines of communication (GLOCs) in Kherson Oblast on September 19 and 20 as Russian troops continue attempts to reconstitute their GLOCs. Ukrainian officials reported multiple Ukrainian air and artillery strikes against Russian manpower and equipment concentration in the Berislav, Henichesk, Kakhovsk, and Kherson districts among other areas, as well as on bridges and pontoon and barge crossings.[27] Ukraine’s Southern Operational Command reported that Ukrainian artillery strikes disrupted Russian attempts to establish alternative crossing sites across the Dnipro River around Nova Kakhovka and Kozatske (both 60km east of Kherson City) and that one of the strikes hit a Russian barge loaded with weapons, equipment, and personnel.[28]  Social media imagery analysis confirms that the Russians have been trying to establish an alternative crossing point near the Kakhovka Dam from at least September 2 through September 18.[29]

Ukrainian official sources maintained operational silence regarding Ukrainian ground attacks in Kherson Oblast, and Russian sources offered unusually limited coverage of activities in this area on September 20. Pro-Russian sources reported that Ukrainian forces went over to the defensive around Posad-Pokrovske (30km northwest of Kherson City) and on the Oleksandrivka front (35km west of Kherson City) after unsuccessful attempts to advance.[30] Russian sources also claimed that Ukrainian forces prepared to conduct offensive operations in the Olhyne-Myrolyubivka area (just south of the Kherson-Dnipropetrovsk Oblast border) around Arkhanhelske and Lyubymivka, but ISW has no independent confirmation of any of these reports.[31]  Ukraine’s Operational Command South reported that Russian forces attempted a platoon-sized attack in the direction of Davydiv Brid—Bilohirka (along the Kherson-Mykolaiv Oblast border near the Inhulets River) but were turned back by Ukrainian artillery.[32] 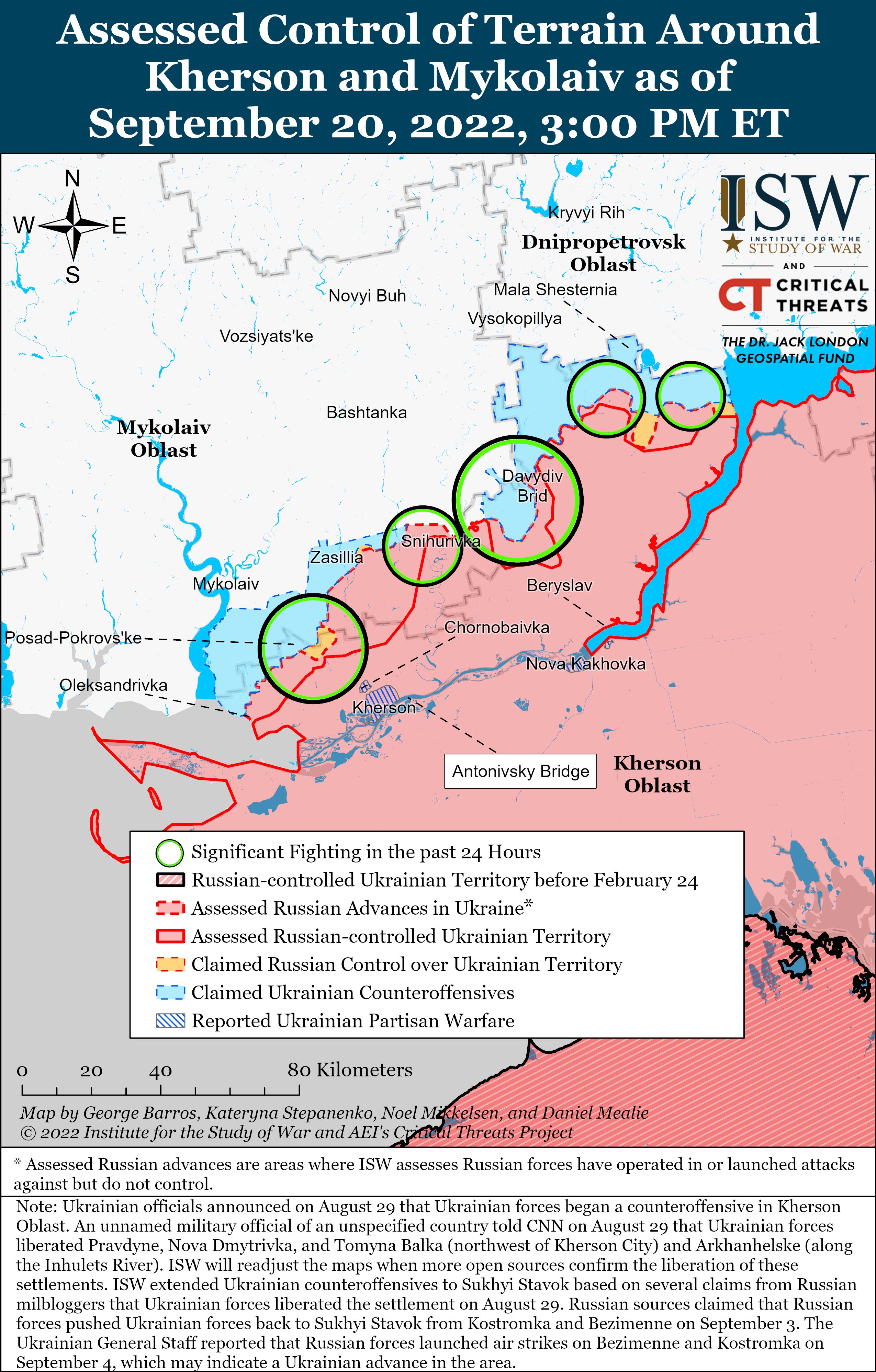 Russian troops continued ground attacks along the northwestern and southwestern outskirts of Donetsk City and attempted to advance around the Pervomaiske-Nevelske area and in Marinka.[38] The Ukrainian General Staff also noted that Russian troops attempted a limited ground attack near Novomykhailivka, 25km southwest of Donetsk City.[39] Russian forces continued routine air and artillery strikes along the line of contact around Bakhmut, the Adviivka-Donetsk City area, western Donetsk Oblast, and eastern Zaporizhia Oblast.[40] 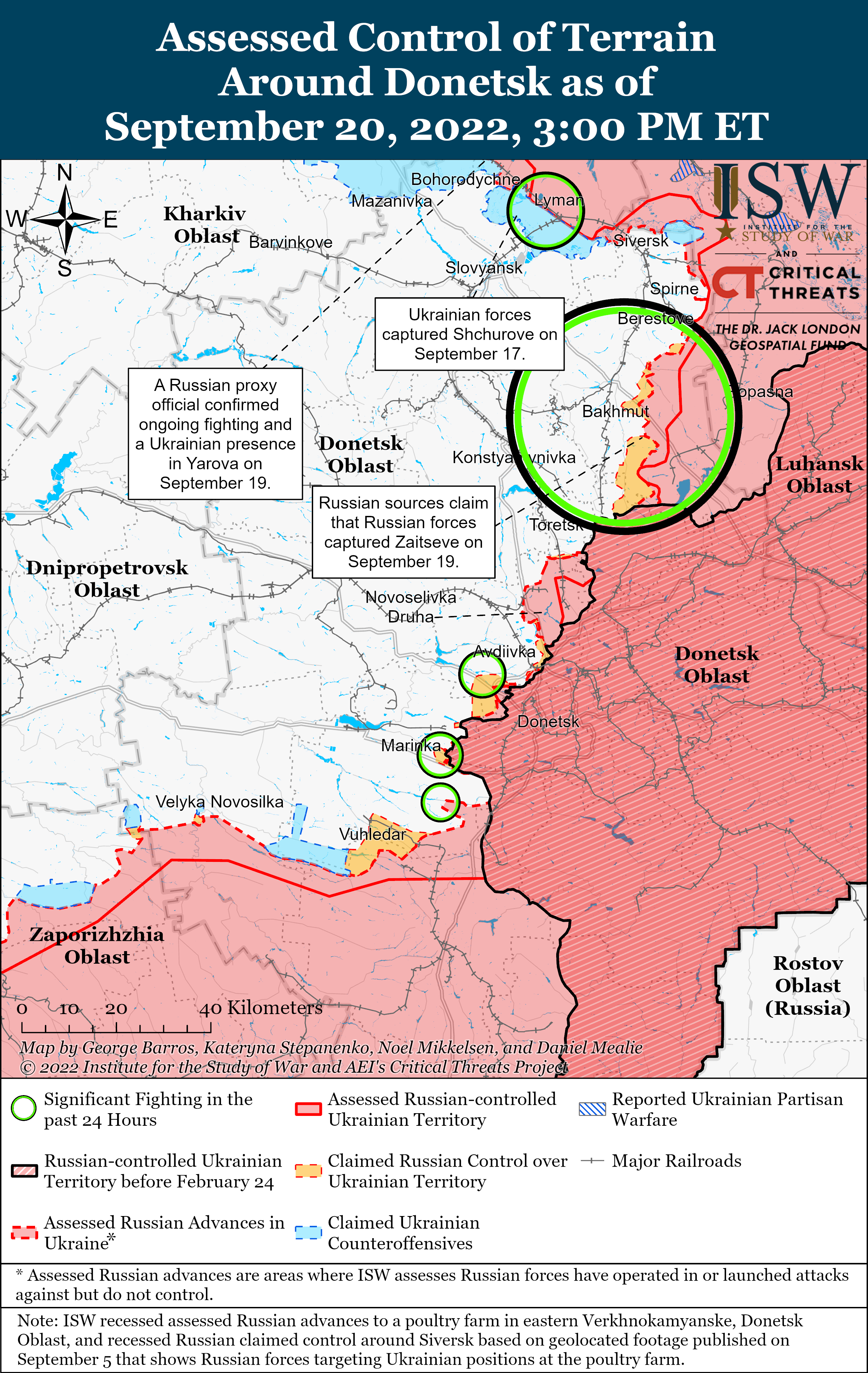 Russian forces did not conduct any confirmed ground attacks west of Hulyaipole on September 20 and continued routine artillery strikes throughout Zaporizhia Oblast.[41] Russian sources continued to accuse Ukrainian forces of shelling the Zaporizhzhia Nuclear Power Plant and surrounding infrastructure in Enerhodar.[42] Russian forces continued missile and artillery strikes throughout Mykolaiv and Dnipropetrovsk Oblasts and targeted infrastructure in the port city of Ochakiv.[43]

Russian forces continue to degrade their force generation capabilities by cannibalizing training elements to fight in combat formations in Ukraine. The Ukrainian General Staff reported that the Russian military is forming four new infantry battalions at the base of the Russian 36th Motorized Rifle Brigade (29th Combined Arms Army, Eastern Military District) in Borzya in Zabaykalsky Krai and that the Russian military is pulling faculty from the Russian Far Eastern Higher Combined Arms Command School to serve as officers in these battalions.[44] The Russian military‘s continued stripping of Russian training units and service academies of personnel will further impede its ability to train new conscripts and replacements.[45]

Russia continues to drain its forces deployed on bases outside Russia since Russia’s full-scale invasion of Ukraine began in February. The Ukrainian General Staff reported that the Russian military-political leadership decided to withdraw unspecified elements of the Russian 217th Airborne Assault Regiment (98th Airborne Division) from the Syrian Arab Republic and prepare them for deployment to Ukraine.[46]