Russian milbloggers discussed Ukrainian gains around Lyman with increased concern on September 28, suggesting that Russian forces in this area may face imminent defeat.[1] Several Russian milbloggers and prominent military correspondents claimed that Ukrainian troops advanced west, north, and northeast of Lyman and are working to complete the envelopment of Russian troops in Lyman and along the northern bank of the Siverskyi Donets River in this area.[2] Russian mibloggers stated that Ukrainian troops are threatening Russian positions and lines of communication that support the Lyman grouping. The collapse of the Lyman pocket will likely be highly consequential to the Russian grouping in northern Donetsk and western Luhansk oblasts and may allow Ukrainian troops to threaten Russian positions along the western Luhansk Oblast border and in the Severodonetsk-Lysychansk area.

Russian military leadership has failed to set information conditions for potentially imminent Russian defeat in Lyman.  The Russian Ministry of Defense has not addressed current Russian losses around Lyman or prepared for the collapse of this sector of the frontline, which will likely further reduce already-low Russian morale. Russian military authorities previously failed to set sufficient information conditions for Russian losses following the first stages of the Ukrainian counteroffensives in Kharkiv Oblast, devastating morale and leading to panic among Russian forces across the Eastern axis. The subsequent ire of the Russian nationalist information space likely played a role in driving the Kremlin to order partial mobilization in the days following Ukraine’s initial sweeping counteroffensive in a haphazard attempt to reinforce Russian lines. Future Ukrainian gains around critical areas in Donetsk and Luhansk Oblast may drive additional wedges between Russian nationalists and military leadership, and between Russian forces and their superiors.

The Kremlin could temporarily postpone announcing the annexation of Russian-occupied Ukrainian territory to better prepare the Russian information space and administrative organization, although September 30 remains the most likely date for some kind of annexation announcement. ISW forecasted on September 27 that Russian President Vladimir Putin will likely announce the Russian annexation of occupied Ukrainian territory on September 30 in his planned address to both houses of the Russian parliament.[3] The Russian Ministry of Defense announced on September 28 that Russia will “fulfill the aspirations of the residents of the LNR, DNR, Zaporizhia, and Kherson oblasts to be together with Russia” in the “near future.”[4] However, Russian State Duma speaker Vyacheslav Volodin announced on September 28 that the State Duma should hold its accession sessions to approve the annexation of occupied Ukrainian territory on October 3 and 4.[5] Latvian-based Russian-language opposition outlet Meduza quoted Kremlin sources on September 28 who claimed that the Kremlin decided ”not to rush things.” Those sources told Meduza that ”the PR effect from [annexation] will be almost zero” due to broad dissatisfaction with partial mobilization in Russia.[6] Meduza reported that the Kremlin conducted a dissatisfactory closed public opinion poll that demonstrated broad Russian discontent and may be attempting to rectify public unhappiness with mobilization before announcing annexation.

Russian-appointed occupation administration leaders of Kherson, Zaporizhia, Donetsk, and Luhansk Oblasts each shared an appeal to Russian President Vladimir Putin by September 28, asking Putin to recognize their sham referenda and welcome them to Russia.[7] The Russian occupation leaders of each oblast will likely meet with Putin in the coming days to present their requests. Putin could announce those performative accession negotiations, rather than final annexation, in his September 30 speech.

Russian authorities continue to send newly-mobilized and undertrained recruits to directly reinforce severely degraded remnants of various units, including units that were previously considered to be Russia’s premier conventional fighting forces. The Ukrainian General Staff reported that newly-mobilized Russian men arrived to reinforce elements of the 1st Tank Regiment of the 2nd Motorized Rifle Division of the 1st Guards Tank Army in unspecified areas of Ukraine with no training at all.[8] Social media footage from September 27 shows a Russian soldier mobilized into the 1st Tank Regiment explaining that he will be sent to fight in Kherson Oblast within two days without any basic training, as ISW reported yesterday.[9] The 1st Guards Tank Army was considered Russia’s premier mechanized force prior to February 24, and that fact that its elements are being reinforced with poorly disciplined, untrained men is consistent with ISW’s previous assessments that even Russia’s most elite units have sustained substantial losses in Ukraine and are therefore increasingly degraded.[10] The addition of newly mobilized forces to elements of the 1st Guards Tank Army is unlikely to lend these units any decisive combat power. 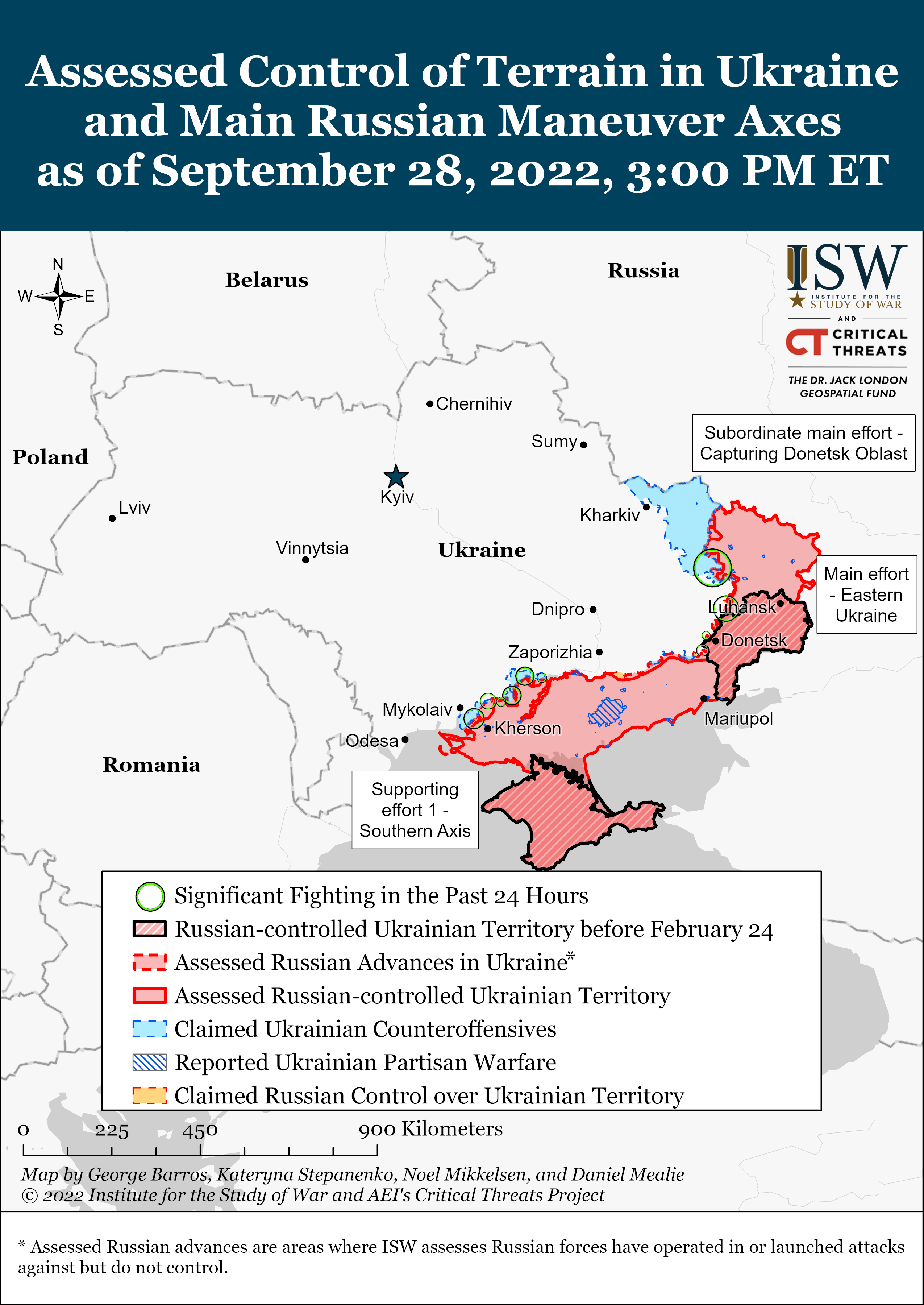 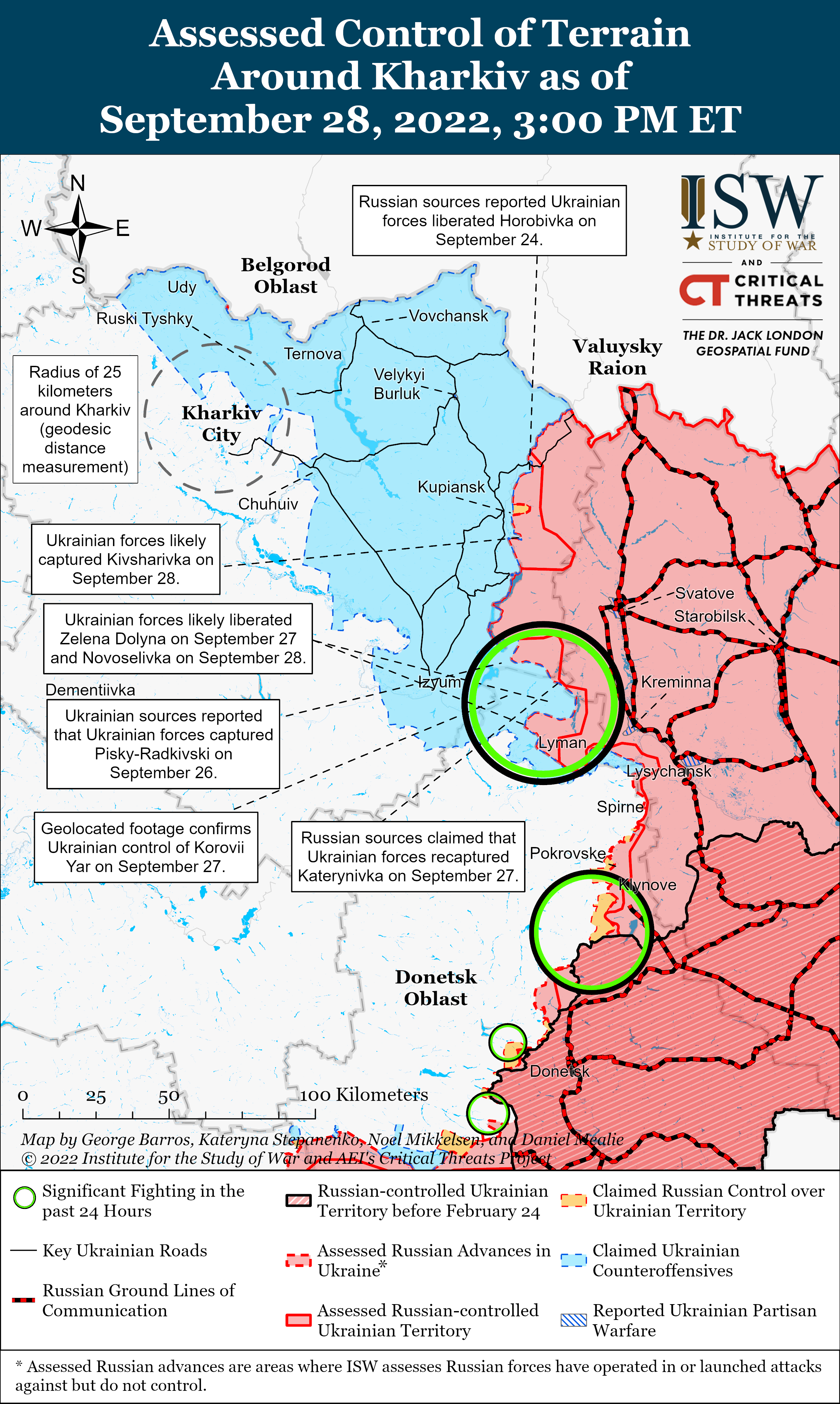 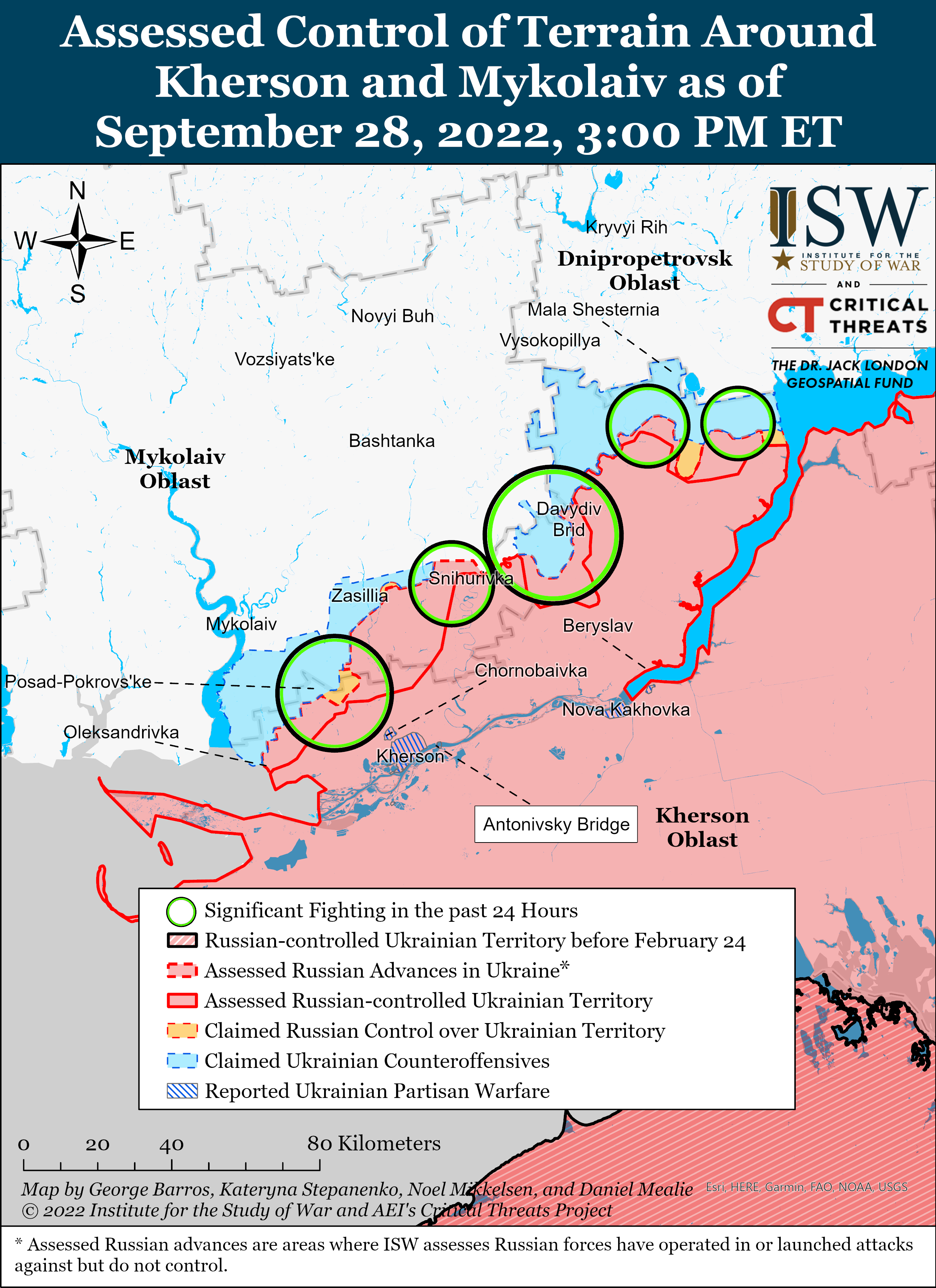 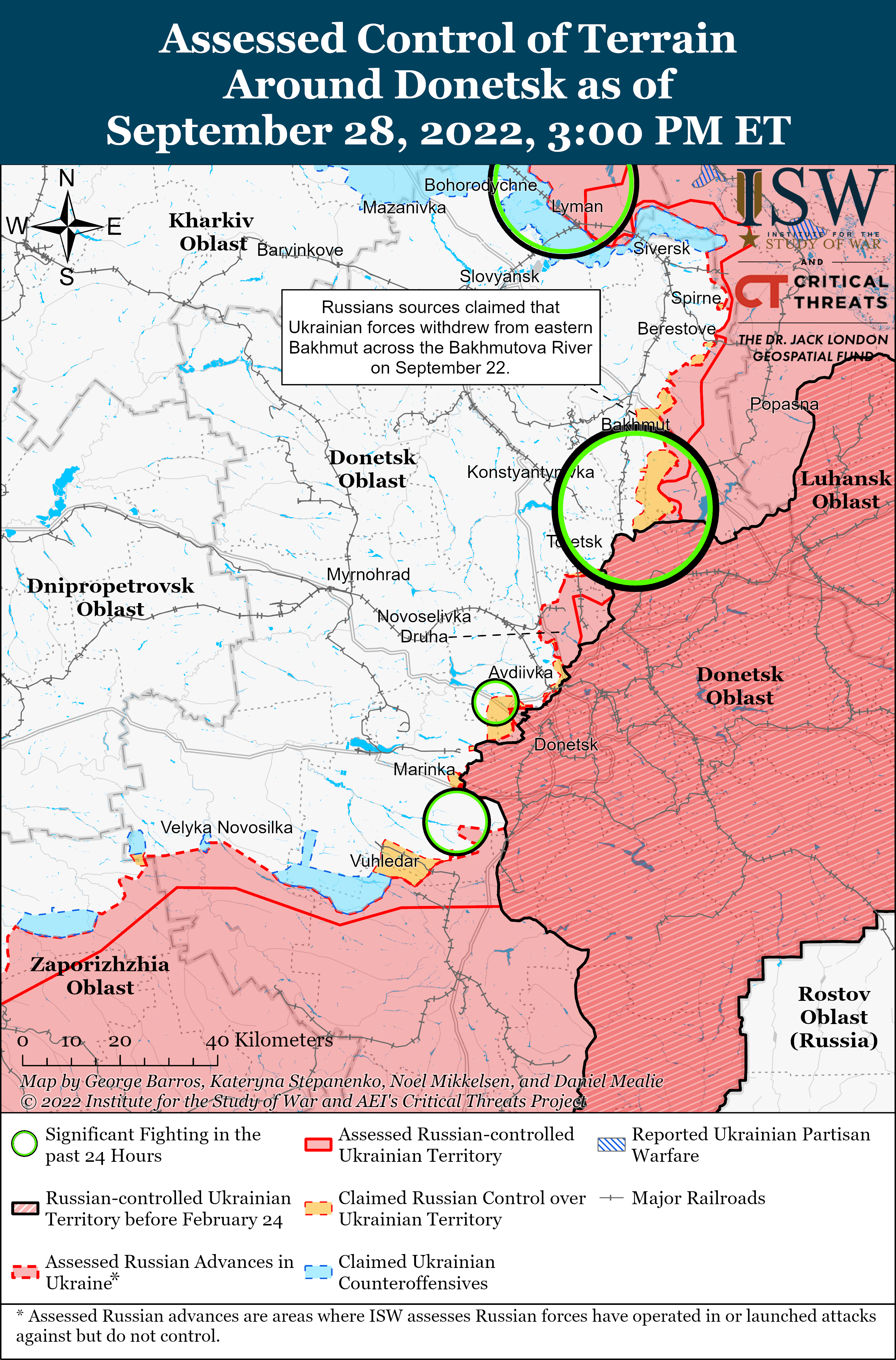 Russian military recruitment officials are openly contradicting the Kremlin’s publicly-stated guidelines for mobilization to meet quota requirements. Novosibirsk Oblast Military Commissar Yevgeny Kudryavtsev told a Siberian news outlet on September 28 that Russian officials will “naturally” mobilize men who are not reservists in order to meet military requirements.[39] Kudryavtsev said that commissars will start by mobilizing people with certain experience and within a certain age range, but that when that round of mobilization does not meet all of their requirements (likely referencing Kremlin-dictated quotas), commissars will then mobilize men with no military experience or who would violate other restrictions on mobilization. Those restrictions include current students, parents of four or more young children, retirees, and people with disabilities.

The Kremlin is likely ordering its officials to change the public perception of mass mobilization, however. The Russian governor of occupied Sevastopol, Mikhail Razvozhaev, announced on September 27 that he is taking personal interest in cases of mistakenly-mobilized men in Sevastopol and asserted that his administration will return mistakenly mobilized men to their homes.[40] The Kremlin’s media outlets and voices are increasingly sharing individual stories in which military recruitment centers released some men who were unfit for service following the involvement of local officials or with the help of Kremlin state media to suggest that errors are being corrected when called to the Kremlin’s attention, as ISW reported on September 26.[41] To that end, Kremlin propaganda outlet RT announced that its charity  ”We Will Continue to Act” will cover the stories of and support men who believe they have been wrongfully mobilized, an initial attempt at government accountability that the Kremlin will likely use to further accuse bureaucrats of incompetence for meeting quotas dictated by the Kremlin.[42]

Russian authorities are beginning to restrict the movement of Russian citizens into Russian border regions to cope with hundreds of thousands of Russian men attempting to flee the country. The Associated Press reported that over 197,000 Russians have already fled through land borders to Georgia, Finland, Kazakhstan, and Mongolia between September 21 and 28, causing miles-long traffic jams at border crossings.[43] The governor of the Russian Republic of North Ossetia-Alania, Sergey Menyailo, declared a “high alert regime” on September 28 that restricted the entry of cars into North Ossetia, which borders Georgia. Menyailo also ordered the establishment of food, shelter, and hygiene facilities for citizens waiting in miles-long traffic jams at the Russian-Georgian border.[44] Russian State Duma Speaker Vyacheslav Volodin addressed rumors that unspecified entities required Russians who made it across the Georgian border to sign a document recognizing Russian aggression and occupation of Georgian territories. Volodin threatened all Russians who sign such documents with punishment if they ever return to Russia.[45]

Russian occupation officials continued to set conditions to forcibly mobilize or conscript Ukrainian civilians in Russian-occupied parts of Ukraine. The People's Militias of the Russian proxy Donetsk and Luhansk People’s Republics (DNR and LNR) shared information about stricter Russian penalties for desertion, insubordination, surrender, and avoiding mobilization on September 28.[46] The DNR militia called on its followers to “make up your minds—are you a defender of the motherland, or a deserter?” and warned that the penalties for desertion will be “significantly tightened” in line with Russian law as soon as the DNR joins Russia.[47]  The DNR and LNR have forcibly mobilized their populations to varying degrees since 2014 and have not commented on whether their populations will be subject to Russian mobilization.

Ukraine’s National Resistance Center reported on September 28 that the heads of Kherson’s and Zaporizhia’s occupation administrations are planning the partial mobilization of Ukrainian civilians as soon as Russia annexes those oblasts.[48] However, Kherson Occupation Administration Head Vladimir Saldo alleged that no Kherson Oblast residents will be mobilized when Kherson Oblast joins Russia and that the oblast would provide only volunteer battalions to fight against Ukraine.[49] It remains unclear whether Saldo will remain in charge of Russia’s occupation of Kherson Oblast after the Kremlin annexes Kherson Oblast. The Ukrainian advisor to Ukraine’s Kherson Oblast Military Administration, Serhiy Klan, reported that Russian forces unexpectedly began allowing men between the ages of 18 and 35 to leave Kherson again on September 28 after closing the border to men of fighting age on September 25.[50] ISW had previously assessed that Russian forces may have prevented men of fighting age from fleeing occupied Ukraine to preserve forces for forced mobilization or conscription after the Kremlin formalizes its annexation of occupied Ukrainian territories.[51]