The Folly of Abandoning Afghanistan 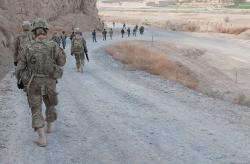 If America's experience in Iraq offers any single, unambiguous lesson, it is the folly of just walking away. The United States must not repeat this mistake in Afghanistan. Isolation and disengagement have severely damaged American credibility and security, as can be seen most dramatically in Ukraine today. America's withdrawal of forces from Iraq did not “end that war,” as President Obama claimed—it merely launched it into a new and even more dangerous phase. A similar retreat from Afghanistan would do the same there. Among other things, it would hand al-Qaeda yet another unearned victory after much effort and sacrifice had driven it to the brink of defeat.

The act of withdrawing forces is not neutral. It inevitably alters the dynamics within the host nation dramatically. The departure of U.S. forces from Iraq in 2011 transformed the political situation inside the country. Within hours of the movement of the last American troops out of the country, Prime Minister Maliki moved against his political rivals, attempting to arrest the Sunni Vice President, torturing his guards, and subsequently causing him to be tried in absentia and sentenced to death. Unchecked by any meaningful U.S. response and without fear even of the prying eyes of U.S. military forces, Maliki continued to target his Sunni opponents, generating a massive protest movement among disenfranchised Sunni Iraqis who felt themselves both vulnerable and betrayed by the Americans who had promised to stand with them against both al-Qaeda and Shi’a dictatorship. The political confrontation predictably escalated when the Iraqi Security Forces stormed a protest site in the name of dislodging terrorists, but instead killed several hundred people, mostly civilians. The incident fanned the flames of violent extremism and spread conditions conducive to the rebirth of al-Qaeda in Iraq, rebranded as the Islamic State of Iraq and Sham (meaning the Levant) after it extended its area of operations to Syria.

Violent attacks in 2013 in Iraq alone left 8,000 Iraqis dead. ISIS raised its flag over Fallujah at the turn of 2014, seven years after the combined efforts of U.S. forces and Anbari tribes had driven it out, and is contesting terrain from Mosul to Baghdad. The Iraqi Security Forces, though active and assisted by U.S. intelligence, cannot control the growing threat. Foreign fighters are joining the organization for operations in Iraq and Syria. Militant extremists, including ISIS and the favored al-Qaeda affiliate Jabhat al-Nusra, have safe haven in eastern Syria and western Iraq. Some foreign fighters are returning to their countries of origin, including Europe, according to testimony from the U.S. Director of National Intelligence, James Clapper. The West thus faces the threat of combat-hardened jihadi fighters flowing back home, possibly to pursue jihad in Europe and the U.S. directly.

America risks causing analogous systemic failures in Afghanistan, where the politics are fraught, the neighborhood is rough, and the security forces are less mature. The president of Afghanistan who succeeds Karzai will lack his strength and patronage—even if supported by his power base. And the death of some of the stalwart old powerbrokers, such as Vice President Marshal Fahim Khan, leaves room for competition in an Afghan polity characterized by extreme fractiousness in the best of circumstances. The situation is analogous to Iraq in so many ways. The U.S. retreat from Iraq followed a heavily contested election in 2010 that came close to unseating Prime Minister Maliki and thus allowing for a peaceful transition of power. Iraq’s dynamics, Iranian efforts, and the tepid and wrongheaded policies of a U.S. administration focused only on getting out allowed Maliki to hijack the election and pursue his sectarian agenda. Afghanistan will be in a similarly parlous place in 2014, as it will almost certainly see the first peaceful transfer of power in many decades. The withdrawal of all American (and, therefore, Western) forces during such a critical moment in a very fragile state would be insane.

Read the rest of this article at Strategika.