How Does the Regime Stand in Aleppo and Homs? 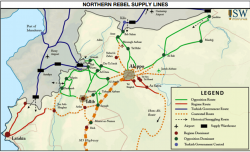 Read this article at Syria Deeply.

The Institute for the Study of War (ISW) has released a report on the regime’s campaign in Aleppo and Homs cities in 2013 and the military situation on the ground in each situation going into 2014.

It asserts that in spring 2013, “the regime lacked the necessary manpower to conduct simultaneous operations on multiple fronts against rebel groups that were quickly making gains throughout the north, south and Damascus countryside. The Syrian Arab Army (SAA) had sustained more losses than it could replenish. It relied on air assets to resupply besieged troops in its Aleppo and Idlib outposts because it lacked overland logistical lines connecting those outposts.”

ISW’s Isabel Nassief, the paper’s author, explains why Assad is confident in the new year, but won’t be able to pull off a “decisive victory” over rebel fighters.

Syria Deeply: What is the current outlook for the regime?

Isabel Nassief: The regime is stronger in January 2014 than it was last year. Going into the 2013 year, the regime had significant challenges, one of which centered on an issue of manpower. Due to defections, deaths and general attrition, it had lost a lot of troops. The regime was also faced with an insurgency that was fighting an unconventional war, and it didn’t have the capacity to meet that challenge because the Syrian Arab Army had been trained as a conventional fighting force. Over the course of 2013 there was increasing support for the regime from Hezbollah, Iran and Iraqi Shia militias, and Russia that has boosted their manpower and helped them fight this unconventional war.

SD: Why did you decide to explore the situations in these two cities?

Homs’s proximity to Lebanon makes it a more viable battlefield, with Hezbollah’s participation, and the extent of Hezbollah’s command and control of operations in Homs is far greater than that it is in Aleppo.

Read the rest of this article at Syria Deeply.