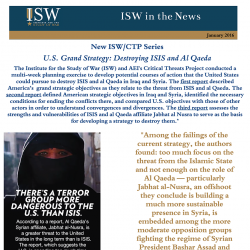 "According to a report, Al-Qaeda's Syrian affiliate, Jabhat al-Nusra, is a greater threat to the United States in the long term than is ISIS.  The report, which suggests the U.S. is spending too much time focused on ISIS, was released last week by the Institute for the Study of War and the American Enterprise Institute."  Source:  CNN