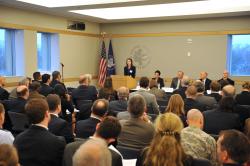 Under Saddam Hussein, a complex web of intelligence and security institutions protected the regime and repressed the Iraqi people.  Underfunded and mismanaged, the Iraqi police were least among those institutions and unprepared to secure the streets when Coalition Forces arrived in 2003 and disbanded the rest of the security apparatus.  Iraq’s police forces have made important strides, and some 400,000 Iraqi police have been trained and stationed across the country.  However, with the U.S. drawdown in Iraq, the future of the Iraqi police and U.S. police assistance is uncertain.

On February 29, the United States Institute of Peace and the Institute for the Study of War co-hosted a panel of distinguished experts who discussed the history of the Iraqi police and the U.S. police assistance program in Iraq.  This public event introduced a new USIP Special Report by Robert Perito on “The Iraq Federal Police: U.S. Police Building under Fire.”