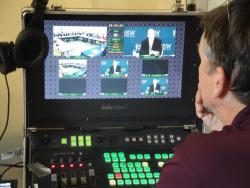 ISW welcomed Stuart Bowen for a breakfast discussion about his work in Iraq and lessons learned during his more than nine years as Special Inspector General for Iraq Reconstruction (SIGIR) .

Stuart W. Bowen, Jr. was appointed Inspector General for the Coalition Provisional Authority in January 2004, and, since October 2004, has served as the Special Inspector General for Iraq Reconstruction. As the “taxpayer’s watchdog” in Iraq, Mr. Bowen has overseen more than $60 billion in U.S. funds.

In addition to his deep insight into how best to plan and carry out Stabilization and Reconstruction Operations, Mr. Bowen has issued a series of "Lessons Learned" reports, culminating this March with the release of "Learning From Iraq."

Over the past 9 years, Mr. Bowen has made 34 trips to Iraq, managed the production of 390 audits and inspections, issued 9 comprehensive “Lessons Learned” reports, and provided 35 quarterly reports on Iraq reconstruction to the Congress. His oversight work has produced financial benefits to the U.S. Government in excess of $1.8 billion, yielded at least 86 convictions for fraud and other crimes, and has recovered over $200 million. He is the author of Hard Lessons: The Iraq Reconstruction Experience.

Watch the full discussion at C-SPAN.org