The 9 Nissan security district, also referred to as Tissa Nissan or New Baghdad, is located in eastern Baghdad. The Diyala River runs along 9 Nissan’s eastern border. On its southwestern edge, 9 Nissan borders the Karadah and Rusafa security districts. 9 Nissan’s proximity to Sadr City, which neighbors the district to the northwest, has meant that Jaysh al-Mahdi and other Shi’a extremist elements operate extensively throughout the district.

Under Saddam Hussein’s regime, many neighborhoods in 9 Nissan had middle-class, mixed populations. The affluent neighborhood of Muthana Zayuna had a mix of Sunni, Shi’a, and Christian residents; a large Palestinian population also lived across the Army Canal in the Beladiat neighborhood. However, the population demographics of 9 Nissan have largely changed since 2003. Since early 2006, Jaysh al-Mahdi extremists have conducted a campaign of forced displacements and extra-judicial killings; hence, the current population of 9 Nissan is principally Shi’a.

Shi’a criminal militias and Iranian-backed Special Groups remain the primary security challenge in the district. 9 Nissan is one of the most lethal areas for U.S. forces, as the number of explosively formed penetrator (EFP) bombings in the district is among the highest in Baghdad. Under Operation Fardh al-Qanoon and the new counterinsurgency strategy, Coalition Forces have aggressively targeted extremist elements in the area. Current trends evidence the success of these operations in reducing violence.  Coalition and Iraqi forces are continuing to target the remaining criminal and Special Group elements in the district, while promoting reconciliation and economic development. 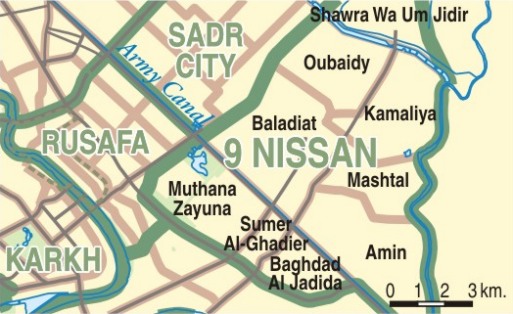