The mid-Euphrates region of Iraq lies south of Baghdad. Its main cities include Karbala, Hillah, Kut (الكوت), Diwaniyah (الديوانية), and Najaf (النجف). The population is predominantly Shi'a in the south and generally a mixture of Sunni and Shi'a to the north of Hillah and northwest of Kut. Iraqi Security Forces (ISF) play an important role in this region, particularly the 8th Iraqi Army Division led by the capable General Othman Ali Ferhood.

The violence in this region is multi-faceted; in 2007, Coalition forces fought al-Qaeda in Iraq (AQI) elements that have used areas south of Baghdad along the Tigris River Valley (such as Salman Pak) to support a campaign of spectacular attacks within the capital of Baghdad. Coalition and Iraqi operations successfully targeted AQI networks. Cells that once projected outwards and fomented sectarian violence are now severely degraded.

Coalition and Iraqi forces have also confronted Iranian-backed Shi’a militias, known as Special Groups, which are often associated with Muqtada al-Sadr’s Jaysh al-Mahdi (JAM). In addition, This region has been the central arena for conflict between the the major Shi’a factions, the Islamic Supreme Council in Iraq (ISCI) and the Sadrist Trend (التيار الصدري).

In the summer of 2007, JAM and the Badr Organization were violently contesting several cities across the south, particularly Diwaniyah, the capital of Qadisiyah province.1  Badr was a rival Shi’a organization which had once been the militia of the Supreme Council (SCIRI, then ISCI) but had largely been incorporated into the Iraqi Security Forces.  Several high-profile assassinations of ISCI and Sadrist figures in July and August increased the tensions between the two groups throughout the shrine cities in the mid-Euphrates.2  On the evening of August 27, 2007, fighting erupted near the Imam Ali shrine in Karbala between JAM militiamen and the shrine guards, who were members of the Iraqi Security Forces affiliated with Badr.3  The area was filled with pilgrims, who were celebrating the Shi’a festival of Shabaniyah near the shrine.

As the fighting escalated and continued into the next day, these worshipers were caught up in the machine gun, mortar, and grenade fire.4  More than fifty civilians were killed and 200 wounded in the firefight.5   It seems plausible that JAM attempted to wrest control of the shrine as both a reprisal attack on Badr and an attempt to claim the control over the religious revenues, but the cause for the outbreak was disputed.  Regardless, many witnesses quickly blamed JAM fighters for sparking the conflict and attempting to seize control of the shrine.6

In the spring of 2008, JAM and Special Groups sought to escalate the violence across the south in the wake of the Basra offensive; however, they were unable to do so.  In the Five Cities area—Karbala, Hillah, Kut, Najaf, and Diwaniyah—these Shi’a militia groups were seriously weakened as the Iraqi Security Forces were able to thwart enemy efforts. In Najaf, where JAM and Special Groups lack a significant operational presence, the period following the ISF offensive in Basra was especially quiet.7

In Diwaniyah, Special Groups did target a nearby Coalition base with Iranian rockets in the immediate wake of the Basra operation. However, the 8th Iraqi Army Division, which is based in the city and is one of the most capable Iraqi units, responded promptly to attacks and launched a security crackdown targeting these extremist groups.8  It is also worth noting that JAM and Special Groups in the area had already been weakened by intra-Shi’a fighting and a series of security operations that occurred the year before.9

In the weeks prior to the Basra offensive, the Karbala provincial government and Iraqi Security Forces were particularly aggressive in going after JAM and particularly Special Groups elements in and around the city. Not only were there several major Special Groups weapons cache finds outside Karbala, but operations were conducted within the city targeting JAM and Special Groups assassination cells.10  The situation escalated in late March, as the Iranian-backed groups responded to the Basra operations. On March 26, 2008, as security personnel were ordered from Karbala to support operations in Basra, gunmen who appeared to be affiliated with JAM staged attacks against Iraqi Police in neighborhoods that were suspected to be JAM strongholds.11 The Karbala Operations Commander, who heads security operations in the province, returned from Basra the next day and led an offensive against the militants.12  The Iraqi Security Forces were effective in and around the city, as they continued to discover weapons caches and IEDs in the areas surrounding the city and defeat JAM in street battles that left numerous gunmen dead and many more captured.13  Additionally, as these fighters suffered heavy losses, many JAM members began to turn themselves in to take advantage of Prime Minister Maliki’s amnesty offer.14  Subsequent operations maintained the pressure on enemy cells in Karbala.15

The violence in al Kut actually preceded the Basra offensive, as fighting erupted between the Shi’a militias and the Iraqi Security Forces in the area in mid-March 2008. At that time, militia forces were trying to assert control over several districts within the city.16   On the first day of fighting, fierce clashes erupted between the Iraqi Security Forces and armed gunmen in central Kut.17  Indirect fire attacks on Forward Operating Base Delta (which houses Coalition Soldiers in al-Kut) as well as repeated Katyusha rocket attacks on central Kut, despite Moqtada as-Sadr’s recent ceasefire renewal, further indicated a Special Groups presence in the area.18  In the two weeks that followed, Iraqi Police teamed with US Special Forces to quell the violence, relying on a combination of intelligence-driven raids, cordon and clear operations, presence patrols, and checkpoints.19  As the fighting subsided in late March, just as the offensive in Basra was beginning, Iraqi Security Forces were firmly in control of al-Kut.20  Hence they were able to maintain security, even as JAM and Special Groups sought to escalate violence across the south.

Ultimately, the operations in the Five Cities area before and during the Basra offensive dealt a major blow to JAM and Special Groups networks in the area.  As the Shi’a militia fighters attempted to stir up violence across the south, Iraqi forces and their Coalition counterparts were able to respond in kind, identifying and targeting JAM and Special Groups leadership, facilitators, weapons stores, and lines of communication. Consequently, Iranian-supported enemy groups lost a great deal of their operational capacity. As a result, it is highly probable that many leaders and fighters went into hiding or fled to Iran, joining those who had escaped from Basra.

Since mid-2008, security across the Five Cities area has been stable. While JAM and Iranian-backed fighters maintain a latent presence, they have been unable to instigate the kinds of attacks witnessed in 2007 and early 2008. 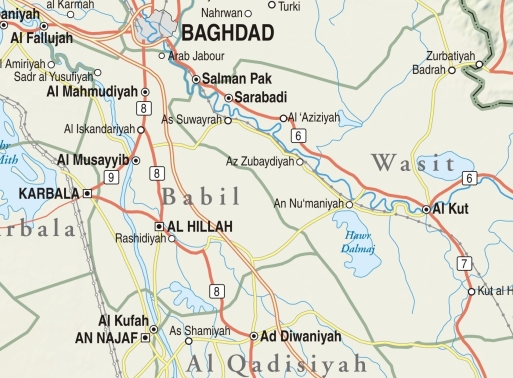