The Kadhimiyah security district is located in northwest Baghdad. Its eastern neighborhoods line the west bank of the Tigris River. Named after the shrine of the seventh Shi'a Imam, Musa al-Kazimi, the district is principally inhabited by Shi'a Muslims. Its main neighborhoods include Shula, Huriya, Zahra, Kadhimiyah, Salaam, Fajr, and Atifiya.  Although portions of Kadhimiyah were inhabited by Sunnis prior to Operation Iraqi Freedom, widespread sectarian violence during 2006 and 2007 forced many of them out.

During 2003 and 2004, Kadhimiyah experienced relative calm as the Sunni insurgency raged elsewhere. However, following the transfer of sovereignty in 2004, and leading up to the January 2005 elections, Sunni rejectionists carried out numerous extra-judicial killings within the district, including the killing the governor of Baghdad, Ali al-Haidari. Throughout 2005 the violence continued to intensify as Al-Qaeda in Iraq (AQI) and Jaysh al-Mahdi (JAM), Muqtada as-Sadr’s Shi'a militia, acting to provide security for the people of Kadhimiyah, frequently battled along the district's southern border with the predominantly Sunni Arab district of Mansour. This sectarian struggle continued into 2006 and was magnified following the bombing of the Samarra mosque in February of that year.

Various Shi'a militias have competed for dominance of the Kadhimiyah neighborhood, which is home to the Kadhimiyah shrine, one of the holiest sites in Shi’a Islam.  The shine generates a significant amount of revenue from pilgrims.  Sadrist cleric Hazem al-Araji and his brother Bahaa al-Araji, a Sadrist parliamentarian, control the shrine. Although the Araji brothers were sympathizers and members of the Sadrist Movement, they also sought to advance their personal and political interests.  As a result, Sadr was not able to control Hazem and Bahaa al-Araji, who were using their affiliation with the movement and its infrastructure to their advantage.  In the spring of 2007, Bahaa al-Araji created a 300-member plainclothes militia in Kadhimiyah ostensibly to protect the shrine — but more likely to defend the Araji’s brothers’ control.   This Kadhimiyah wing undercut the Najaf-based leadership of the movement.  These factions competed with others — including criminal gangs and Iranian-backed Special Groups — for dominance in northwest Baghdad. 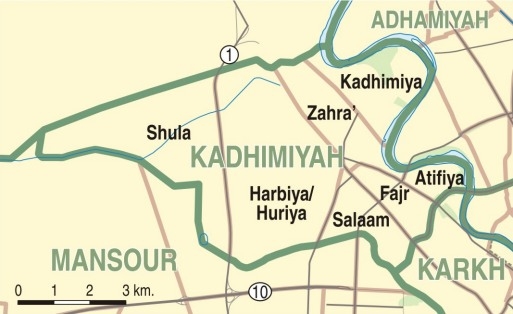