The Karkh security district is located in the heart of Baghdad; a significant portion of the district is occupied by the International Zone, also known as the Green Zone, site of the U.S. Embassy. Karkh is perhaps best known for the main road, Haifa Street, which runs from the International Zone northwest to the neighborhood of Sheikh Ma’arouf and Kadhimiyah. With the Tigris River to the east, Muthanna Airfield to the west, and the International Zone to the south, the two-mile-long street and its environs are among the more geographically isolated neighborhoods in downtown Baghdad. Built up around a core of residences, including western-style apartment buildings, for the Ba’athist elite under Saddam Hussein’s regime, the area includes a Sunni enclave and a swathe of mixed and Shi’a territory around it. Following the Battle of Haifa Street in January 2007 (documented in Iraq Report 1), armed insurgent attacks on Haifa Street are rare, although it has been a hotbed of Sunni insurgent activity in the past. The area had also been plagued by pervasive economic and political influence from Jaysh al-Mahdi (JAM), which tried to exert control over the area from its strongholds to the north and across the Tigris. 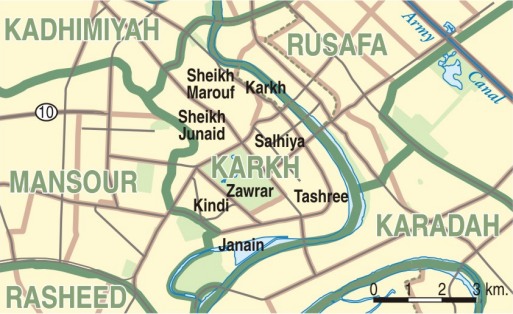