The Mansour security district is located in western Baghdad stretching from the Abu Ghraib area and the airport east to Karkh. Bounded by the Shi’a-dominated Kadhimiyah to the north and Rashid to the south, Mansour is overwhelmingly Sunni, with a few mixed areas remaining in Yarmouk in the southeast. Prior to Operation Fardh al-Qanoon, Mansour was thoroughly infiltrated by Al-Qaeda in Iraq, having established strongholds in Ghazaliyah, Ameriyah, Khadra, Jamia, Yarmouk, and Hateen. Operations Together Forward I and Together Forward II tried to clear Mansour, but instead introduced elements of the Shi’a-dominated National Police that carried out sectarian killings and kidnappings. These activities were consistent with persistent attempts by Jaysh al-Mahdi to penetrate Mansour from Kadhimiyah to the north and Bayaa and Aamel to the south.

In February 2007, with the beginning of Operation Fardh al-Qanoon, the brigade responsible for northwest Baghad at the time (the 2nd BCT, 1st ID – Dagger Brigade) began a series of operations aimed at “protecting the population by defeating extremist and criminal actors within AOR [Area of Responsibility] Dagger, reducing sectarian-focused cleansing, increasing the professional capabilities of the ISF and bolstering local governance efforts to deliver ESS [Essential Services].”1

In order to achieve these objectives, Dagger Brigade established Sons of Iraq (SOI) groups, with great effect in Ameriyah, and used barriers to create “safe neighborhoods.” These barriers prevented al-Qaeda in Iraq and Jaysh al-Mahdi from accessing vulnerable populations and canalized traffic flowing in from the west, cutting off AQI supply lines. Dagger Brigade also built a series of combat or coalition outposts (COP) and joint security stations (JSS), creating a permanent U.S. presence throughout the district. This approach was especially effective in the western neighborhood of Ghazaliyah, where the establishment of several new COPs and a JSS had a major impact on security.

The effect of these operations was dramatic; whereas northwest Baghdad (Kadhimiyah and Mansour) experienced nearly 600 security incidents in June 2007, this number had fallen to only 100 by October. Whereas no Mansour muhalla was classified as “controlled” in March 2007, by October 2007, 73% of the district could be classified as controlled.

In 2008, Coalition and Iraqi forces continued to pressure al-Qaeda and other Sunni insurgent groups in Mansour. These operations have met with success as the Mansour Security District has remained fairly calm and secure. However, al-Qaeda has attempted to rebuild its networks in the district, albeit with limited effect. 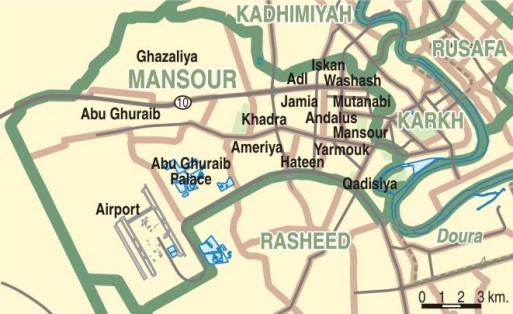