The northeastern belt runs from the Tarmiyah area in the Tigris River Valley, east through Khalis and Baqubah and south to Nahrawan east of Baghdad. It controls the road networks that link Baghdad with the eastern shore of the Tigris River Valley, as well the Diyala River Valley and a key border crossing with Iran. Consequently, both al-Qaeda in Iraq (AQI), Jaysh al-Mahdi, and associated Iranian-backed Special Groups have competed to control the area. Al-Qaeda in Iraq maintained strongholds in Turki Village, a former capital of the Islamic State of Iraq (ISI), Baqubah, and north in Tarmiyah, the follow-on capital of the ISI following coalition operations in January 2007. Jaysh al-Mahdi took advantage of the string of Shi’a villages along the eastern shore of the Tigris River Valley to infiltrate the area, and associated Special Groups have used the road corridors stretching from the Iranian border towards Baghdad to smuggle explosively-formed penetrators (EFP), an extremely deadly anti-armor munition responsible for a rising percentage of US casualties during the summer of 2007.

Prior to the onset of Operation Phantom Thunder, US forces conducted some preparatory operations in the northeastern belt, but largely focused on disrupting al-Qaeda in Iraq and Jaysh al-Mahdi elements operating further north in the Diyala River Valley, and far to the east in Turki Village. Operation Arrowhead Ripper, launched in June as part of Operation Phantom Thunder, aimed to clear AQI from Baqubah. Subsequent US operations during Operation Lightning Hammer I and Lightning Hammer II conducted some “back-clearing” of the road linking Khan Bani Sa’ad to Baqubah, as well as cooperative efforts with tribal and Sons of Iraq (SoI) movements to clear AQI from the areas west of Baqubah to the Tigris River Valley, including Khalis and Hebheb. Operation Lightning Hammer II prevented the reestablishment of AQI in areas previously cleared in the lower Diyala River Valley. In October, the city of was also cleared.

In late 2007, Coalition Forces continued their clearing operations with Operation Iron Reaper. The main effort of Iron Reaper was the clearing of the Khalis Corridor, which connects the Tigris and by pushing out to the area north of Muqdadiyah.  Coalition Forces conducted important reconnaissance in force operations north of Muqdadiyah in order to determine how AQI functioned in Diyala and set forces for the next phase of operations.

Operations in the northeastern belt in early 2008 focused on holding cleared areas and targeting remaining pockets of AQI to ensure that they could not conduct sustained operations or transit elsewhere easily.  US operations also sought to prevent the spread of JAM and Special Groups. US forces worked to incorporate the Sons of Iraq groups into the Iraqi Security Forces and to promote economic and political reconstruction. To this end, US forces have promoted the establishment of local councils that can then be tied into the provincial and federal governments.

In 2009, Coaltion forces began Operation Wolf Pursuit in Balad Ruz, in southern Diyala province, to permanently root out remaining pockets of insurgency.  The operation was carried out in tandem with Iraqi forces.  Following the clearing and holding of areas, the operational plan called for the establishment of combat outposts to maintain security and begin developing the rural areas.  Additionally, integration of the Sons of Iraq was completed in April 2009. 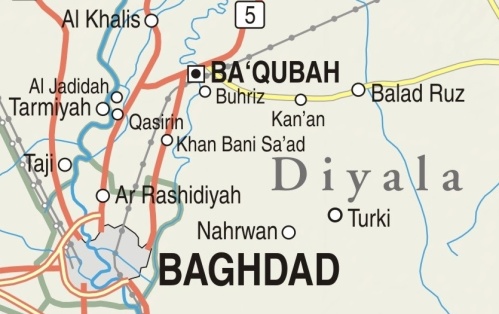