Sadr City, a sprawling slum in northeastern Baghdad, is home to over 2 million Iraqis and has the largest Shi’a population in Baghdad. Sadr City was built in 1959 and unofficially named for Ayatollah Mohammad Sadeq al-Sadr, the highly-revered Shi’a cleric who was assassinated by the Saddam Hussein’s regime in 1999. Sadr City presents one of the biggest security challenges for U.S. forces in Baghdad. The area is heavily controlled by the Jaysh al-Mahdi, the militia loyal to the radical Shi’a cleric Muqtada al-Sadr. The residents of Sadr City rely entirely on the Jaysh al-Mahdi and the Office of the Martyr Sadr, the political wing of the Sadrist trend, for security and essential services.

It was not until Operation Fardh al-Qanoon began in February 2007, that U.S. forces were permitted to conduct targeted raids against criminal and extremist elements in Sadr City. Since that time, Coalition forces have captured or detained numerous Jaysh al-Mahdi extremists and Iranian-backed Special Groups members. These efforts have helped to reduce levels of violence throughout Baghdad; however, the Jaysh al-Mahdi, Special Groups, and other Shi’a criminal elements that remain active in Sadr City present a serious threat to security and stability in Baghdad.

Since March 2008, Coalition and Iraqi Security Forces have pushed into Sadr City, setting up permanent positions in the district. While U.S. forces have limited their positions to the southern third of Sadr City, Iraqi forces launched Operation Peace on May 20, 2008, to clear the northern section of the district. In addition to these security operations, Iraqi and Coalition Forces also launched a reconstruction and humanitarian campaign in Sadr City. In the southern part of the district, Coalition Forces have created a Neighborhood Guard (a security volunteer program modeled on Sons of Iraq groups) to employ residents to safeguard their neighborhood.

Since mid-2008, the security situation in Sadr City has remained stable. JAM and Special Groups elements remain in Sadr City; however, Iraqi and Coalition forces  continue to target their networks. 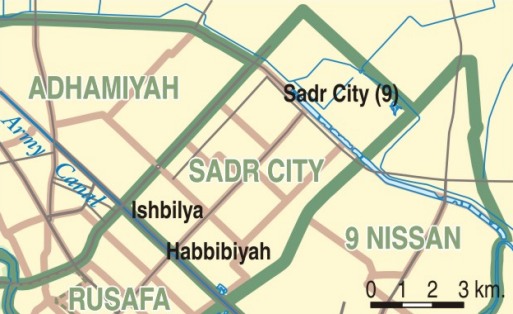