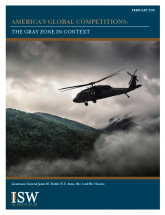 The international community is grappling for its future, but the wrestling is more complicated than Carl von Clausewitz’s “pair of wrestlers.” The U.S. is part of three ongoing regional and global competitions. At stake: the future of the international order. The first competition involves revisionist powers — Russia, China, and Iran. This competition is below the threshold of war so far, but recent events in Syria show just how easily that threshold might be crossed. Revisionist powers seek to revise the current global order to their advantage, increasing their regional and global influence while decreasing that of the United States and its allies and partners. The second has already crossed the threshold of war. This competition involves revolutionary powers — Al Qaeda, the Islamic State of Iraq and al Sham (ISIS), and their ilk. These groups are not mere terrorists. They are waging (and have been from the start) a global revolutionary (and therefore ideological) war, a form of insurgency which is initially local and regional but already has global implications. The United States has waged, with few exceptions, a counterterrorist war. Ultimately, these revolutionary powers seek to overthrow the current international order set in place after World War II. The third competition involves the rogue power, North Korea. This competition is also below the threshold of war, but as recent events have shown it is pressing right against that threshold. Brinkmanship describes this competitive space. Kim Jong-un seeks to maintain enough tension so that he can use it to maintain the legitimacy of his regime and remain in power. America, her allies, and partners should think of themselves as “leading powers” seeking to adapt the post-World War II international order to the myriad of changes brought about by the emerging information age, globalization, the revolution in digital technologies, and the end of the Cold War. The United States, with its allies and partners, are wrestling all three sets of competitors simultaneously, and wrestle they must. For these powers have more at stake in adapting the post-World War II rule-based international order than they seem to think.

Taking on one at a time, as desirable as that approach might be, is simply not possible. Like it or not, the U.S., with its allies and partners, faces three, interlocked challenges. How the eroding post-World War II international order adapts or crumbles will be a function of the degree of success the U.S. and its allies have in each of these interrelated challenges.

Challenge #1. Compete successfully with the revisionist powers below the threshold of war. Success in this arena requires maintaining a robust alliance system, retaining a credible nuclear deterrent capacity, resurrecting conventional deterrent capabilities, and winning in the area in which revisionist powers now seek to expand their influence — what is called the “gray zone.”

Challenge #2. Defeat the revolutionary powers in a way that guides the current international system in a positive direction and demonstrates the deterrent capacity of the leading powers, including the United States.

Challenge #3. Prevent the rogue power from destabilizing the international environment or crossing the threshold of war.

The U.S., its allies, and partners cannot bumble their way toward a better future. All three of these challenges are real and pressing. None will resolve itself. While these competitors do not act in concert, the effects of their actions are all connected. Resolution will require a coordinated effort within the United States, its allies, and its friends as well as among them. Resolution will also require a sufficiently common strategy among the leading powers and organizations that can translate that strategy into action and adapt as opportunities and obstacles arise. Resolving this tri-challenge Rubik’s Cube is a very tall order, but this is the demand if the leading powers hope to create a future with at least as much peace, stability, and prosperity as the world has enjoyed between 1950 and 2000.

Our future is not foreordained, but this much is clear: the decisions and actions the United States, its allies, and its partners take will positively or negatively impact how the future unfolds. Perhaps a scene from the “Lawrence of Arabia” movie sums it up best: Lawrence and his army had marched through burning sands and biting windstorms. Many were on the edge of dehydration. When they found an oasis, Lawrence realized that his camel boy was missing. When no one volunteered to march back and retrieve the boy, Lawrence went himself. His men pleaded with him not to go, saying “His fate was written by God.” Two days later, Lawrence returned with the boy, so exhausted and dry that he could only whisper, “Nothing is written unless we write it.”
The purpose of this essay is to contribute to a description of what the U.S. and its allies must do together. The essay will take up each of the challenges listed above in turn. Our goal is to describe not just an approach that may be necessary to resolve each challenge, but also how the resolution of each challenge is connected to the others. In achieving this goal, we hope also to place the Gray Zone in its proper strategic context.
Read the full report here.
Full Size Image: 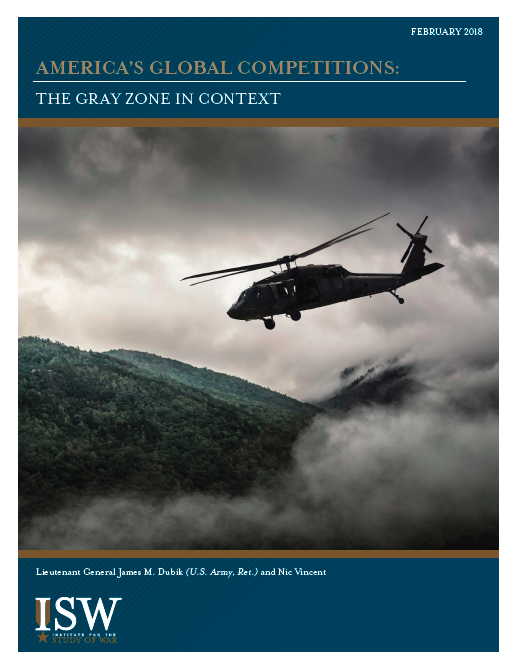