Anbar Awakening: Displacing Al-Qaeda From Its Stronghold in Western Iraq 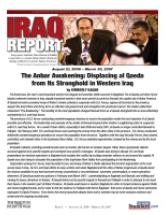 In fall 2006 a group of Sunni Sheiks in Ramadi rejected al-Qaeda and began to cooperate with the U.S. forces that they had long opposed. The “Anbar Awakening” and “Anbar Salvation” movements transformed Anbar from an insurgent stronghold into an area where US forces could conduct effective operations. The local population joined the Iraqi Security Forces in large numbers. U.S. and Iraqi forces cleared Ramadi and much of the Euphrates River Valley. These efforts denied al-Qaeda access to one of its most critical bases in Iraq. The Anbar Awakening represents the potential roles that joint U.S. and ISF counterinsurgency operations can play in the re-establishment of Iraqi government: a catalyst for negotiations between Prime Minister Nouri al-Maliki and Iraq’s Sunni population, and a model for securing other provinces and developing their local governments.

The Anbar Awakening indicates the actions needed to convince the local population to support the government and expel enemy forces. This element of counter-insurgency success required coalition and ISF forces to work as a team while conducting simultaneous military operations and reconstruction efforts. After months of consistent cooperation, U.S. and Iraqi soldiers won support from critical members of the local population, the tribal sheiks. Although al-Qaeda attempted to regain support by terrorizing Iraqi civilians with suicide attacks and chemical weapons, the provincial government regrouped and reconnected with the central government in Baghdad. This was a critical first step toward establishing a working relationship among the Iraqi capital and its provinces.