"An Army in All Corners:" Assad's Campaign Strategy in Syria 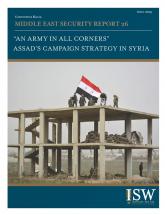 U.S. policymakers in April 2015 appear to be returning to the position that Syrian President Bashar al-Assad represents the “least worst option in Syria” for American strategic interests. Assad is often compared to the Islamic State (ISIS) with the implication that Assad is the lesser of two evils. Senior administration officials including Secretary of State John Kerry signaled support for diplomatic negotiations with the regime in March 2015, rather than developing a committed strategy to remove Assad from power.  American leaders’ ambivalence reflects the limitations of U.S. policy which attempts to treat Syria as the backdrop for a narrow counterterrorism problem rather than a comprehensive national security issue. This outlook is dangerously flawed.

U.S. policymakers may be being captured by Bashar al-Assad’s own narrative.  Assad’s political objective is to remain in power past the end of the Syrian war. However, the inability of regime forces to defeat the Syrian opposition decisively in battle has forced the regime to rhetorically embrace a negotiated solution to the conflict. The Syrian military campaign has complemented such official statements by attempting to set conditions on the ground favorable to the regime’s negotiating position.

Bashar al-Assad is neither a viable partner against the Islamic State (ISIS) nor the “least worst option” for U.S. national interests in Syria for three reasons. First, the Assad regime cannot control the territory that was Syria or win the Syrian war decisively. Second, the Assad regime is Iran’s strategic asset in Syria and Assad is beholden to Iran for keeping his military viable. Third, Assad’s brutal tactics and humanitarian abuses have accelerated the growth of jihadist groups regionally and globally.

The Assad regime is not positioned to secure an outright military victory in 2015. The Syrian Arab Army (SAA) continues to grapple with chronic problems of attrition and political unreliability which force Assad to rely upon a small core of trusted elite military units in addition to the IRGC-QF, Hezbollah, and other Iranian-aligned forces to conduct offensive operations. Meanwhile, the use of decentralized paramilitary units such as the National Defense Forces (NDF) in increasingly prominent combat roles has fragmented the regime’s authority over its fighting force and caused cleavages in Assad’s popular support base.

These manpower limitations have led Assad to adopt a military strategy of an ‘army in all corners’ which involves the establishment and defense of remote regime outposts throughout Syria in order to pin the outer bounds of a contiguous post-war Syrian state. Assad likely hopes that this strategy will enable him to avoid decisive defeat while still outwardly claiming to control all of Syria, eventually translating into international political legitimacy. This approach may successfully prolong the staying power of President Assad, but it protracts violence and destruction throughout the country and allows jihadist groups to flourish. The passive posture maintained by Assad’s forces effectively cedes control over large swathes of countryside to ISIS, JN, and other Islamic extremist groups.

Iranian involvement is as essential to Assad’s survival in 2015 as it was in 2013 when it stabilized the regime’s then-losing war effort. The return of thousands of Iraqi Shi’a militia fighters to Iraq following the fall of Mosul in June 2014 prompted the Iranian Revolutionary Guard Corps (IRGC) to mobilize thousands of foreign Shi’a volunteers, including Afghans, to augment Assad’s military forces. The latter half of 2014 thus witnessed a surge in the involvement of Iran and its proxy forces on behalf of the Assad regime, staving off attrition once more. In a sign of its deepening influence, the IRGC conducted its own independent recruitment efforts inside of Syria and occasionally assumed direct command over field operations. These developments suggest that the Assad regime is increasingly losing agency over its own military campaign.

The growth of the Iranian presence in Syria challenges key U.S. regional allies as well as wider U.S. strategic interests in the Middle East. Iran and its allies directed regime offensives in southern Syria which were likely intended in part to position Iranian-aligned forces in close proximity to the border with the Israeli-controlled Golan Heights. Expanded Iranian influence also threatens to disrupt the calculus of Saudi Arabia, Turkey, and other regional powers in a way which promotes further conflict. Saudi Arabia and its Gulf allies have already demonstrated the willingness to counter perceived Iranian expansion through military means with the launch of Operation Decisive Storm in Yemen. The lack of U.S. action against Assad, and by extension Iran, strains relations between the U.S. and its Arab allies and erodes the credibility of the U.S. position in the region as a whole.

Assad is accelerating the growth of violent jihadist movements in Syria, the region, and globally.   The tactics used by the regime to enforce his “army in all corners” strategy mark Assad as a permanent enemy to many Syrians. Assad has utilized airstrikes, barrel bombs, and chemical weapons to punish populations in opposition-held areas and to clear them comprehensively with minimal investment of manpower. The forces of the regime have employed other brutal tactics involving sieges, sectarian massacres, and torture to neutralize resistance to Assad’s rule. These atrocities strengthen the sectarian narrative held by Salafi-jihadist groups operating in Syria and provide a constant stream of recruits vulnerable to radicalization.

The abuses of the Assad regime contribute to a deepening humanitarian crisis which threatens to overwhelm the region. The Syrian Civil War has already claimed the lives of over 220,000 Syrians and displaced nearly 11.5 million civilians. Millions of refugees have fled to neighboring countries, placing heavy burdens upon regional U.S. allies such as Lebanon, Jordan, and Turkey. Assad is the instigator of and not the solution to this problem. Inaction on the part of the U.S. only drives a further wedge between the West and the Syrian populace. Many elements of the formerly-moderate opposition have aligned with jihadist groups such as JN which are perceived as effective partners in the fight against the regime. In turn, this shift towards extremism bolsters Assad with additional domestic and international legitimacy as the only apparent alternative to a radicalized Syria. Assad is not a capable or suitable anti-ISIS partner. Rather, his regime assures the survival of ISIS and al-Qaeda in Syria.

The current status quo trends in the Syrian Civil War are untenable for U.S. national interests. Allowing the Syrian regime to conduct its military campaign with impunity sows the seeds for generations of regional disorder to come and empowers the expansionist designs of the Iranian regime. The U.S. does possess additional cards that it could place on the table for resolving the Syrian conflict, including the imposition of a No Fly Zone over opposition-held areas or an expedited effort to train-and-equip Syrian opposition fighters alongside regional allies. If U.S. policymakers do not adopt a more forceful and focused approach to Syria, the only foreseeable outcome is a fragmented and failed Syrian state which menaces its neighbors and brutalizes its people.