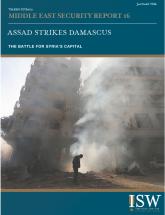 Damascus is the Syrian regime’s center of gravity. The capital of Syria has long been viewed by the rebel forces as the key to winning the war in Syria, and its loss is unthinkable for Bashar al-Assad. Thus the struggle for Damascus is existential for the regime as well as the opposition. An operational understanding of the battle for Damascus is critical to understanding the imminent trajectory of the war. This report details the course of the conflict as it engulfed Damascus in 2013; laying out the regime’s strategy and describing the political and military factors that shaped its decisions on the battlefield.

As the seat of power for the Assad regime, Damascus has always been heavily militarized and has hosted a high proportion of the Syrian armed forces throughout the war. It became a battleground relatively late in the conflict. In July 2012, rebels advanced into areas of the capital previously thought to be impenetrable. In response, the regime escalated operations in the capital in late 2012 and consolidated forces from other parts of the country. Meanwhile, rebels in Damascus worked to improve their organizational structure, and implemented a shift towards targeted attacks on infrastructure and strategic assets. In addition to redistributing forces, the regime in late 2012 began augmenting its forces with foreign fighters, namely Hezbollah and Iraqi Shi‘a militias, and professionalizing pro-regime militias. This influx of manpower, in addition to increased levels of support from Iran and Russia, has been critical to the regime’s military strategy in 2013.

In early 2013, the Syrian regime set conditions for future operations in Damascus by seizing key terrain to open its own supply lines, cut opposition supply lines, and isolate rebel support zones. In April, the regime also escalated sieges of key neighborhoods. The regime’s use of blockades to restrict the flow of food, medicine, and people into and out of neighborhoods with a rebel presence was an increasingly important component of its military operations throughout 2013.

Rebel forces in Damascus fought back with a series of offensives throughout the summer. A counteroffensive named “al-Furqan” led by a coalition of rebel brigades worked to re-establish supply lines in eastern Ghouta. Another rebel coalition named “Jabhat Fatah al-Asima,” made advances near the inner suburb of Jobar, bringing them close to the edge of the central al-Abbasiyyeen Square. These rebel advances, along with the use of increasingly sophisticated weaponry, presented an ever-growing threat the regime.

International developments in the summer of 2013 also heightened the regime’s threat perception. In June 2013, the White House acknowledged Assad’s use of chemical weapons, and announced an increase in the scope and scale of assistance to the armed opposition. Shortly thereafter, a meeting by the Friends of Syria group in Doha hinted at even greater increases in rebel support. Then in July 2013, Jordan announced it was hosting 900 U.S. military personnel. These events added to the growing fear of the regime as rumors of an imminent large-scale rebel offensive in Damascus grew.

The regime escalated. In the evening of August 20, 2013, the Syrian regime began Operation Capital Shield, its largest-ever Damascus offensive, aimed at preempting a rebel attack on the capital and decisively ending the deadlock in key contested terrain around the city. The regime launched a spectacular chemical attack on contested rebel support zones previously weakened through siege. The chemical volley was followed by ground and artillery advances on multiple fronts across the Damascus area, capitalizing on the pandemonium and disorder caused by the initial attack.

While the Syrian regime continued its military operations, it also contended with the threat of what seemed like an imminent U.S. strike. This threat prompted a reconfiguration of military assets that the regime feared might be targeted by the U.S. Between August 31 and September 9, the U.S. decided not to strike, instead opting for the diplomatic solution offered by Russia for the Syrian government to give up its chemical weapons.

For the rebel fighters affiliated with the Free Syrian Army (FSA), who had pinned their hopes on western support and U.S. intervention, the delay and eventual cancellation of a military strike was devastating. In the following months, rebel groups in Syria increasingly distanced themselves from the Western-backed National Coalition and the FSA’s Supreme Military Council. Saudi Arabia too, expressed frustration with Western inaction, and, along with other Gulf states, is playing a significant role in the formation and realignment of rebels in Syria.

As the threat of Western intervention diminished, the Syrian regime gained renewed confidence and continued with offensive military actions and crippling neighborhood sieges into the winter months. September and October saw the continuation of Operation Capital Shield in addition to a series of complementary operations across multiple Damascus fronts.

Despite appearing to have the momentum in Damascus in early 2014, the regime is running out of options for a decisive victory. With its freedom to use chemical weapons currently curtailed, the regime has expanded the use of other methods to target civilians indiscriminately, including the use of improvised barrel bombs. Additionally, the regime’s reliance on foreign and irregular forces leaves its military capacity vulnerable to events beyond its control.

Rebel forces have continued to reorganize in late 2013 and early 2014 with renewed Gulf support, and the newest wave of rebel coalitions has thus far proved more successful than previous incarnations. Renewed rebel campaigns in Damascus suggest that they will survive the winter months, and once the spring comes and the regime’s sieges lose their harsh edge, may once again challenge Assad’s grip on the fortress of Damascus.

Without a foreseeable end to the armed uprising, Bashar al-Assad will leverage the politics surrounding the Geneva II conference to legitimize and extend his rule. The regime intends to use Geneva II to buy time while it increases military operations in Syria and shapes conditions for summer presidential elections, which are the focus of Assad’s longer-term strategy for retaining power.

Elections in Syria have never been free and fair. In the 2000 and 2007 presidential referendums, Bashar al-Assad was the only candidate and received more than 97% of the vote. Assad is already taking aggressive steps to ensure his victory in 2014 by changing laws and procedures to disenfranchise potential anti-Assad voters, pre-emptively subverting potential international attempts to enforce free elections in Syria. As the regime and its allies continue to push their intensive messaging strategy, the international community is increasingly at risk of agreeing to elections rather than a transitional government as the path to peace in Syria.