The Battle for Basra 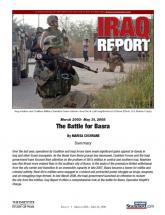 Over the last year, operations by Coalition and Iraqi forces have made significant gains against al-Qaeda in Iraq and other Sunni insurgents. As the threat from these groups has decreased, Coalition Forces and the Iraqi government have focused their attention on the problem of Shi’a militias in central and southern Iraq. Nowhere was this threat more evident than in the southern city of Basra. In the wake of the premature British withdrawal from the city center and transition to an overwatch capacity in late 2007, Basra became a haven for militia and criminal activity. Rival Shi’a militias were engaged in a violent and protracted power struggle as drugs, weapons, and oil smuggling rings thrived. In late March 2008, the Iraqi government launched an offensive to reclaim the city from the militias. Iraq Report 9 offers a comprehensive look at the battle for Basra, Operation Knight’s Charge.

Topic 1: Basra Before the Offensive: The Rise of the Militias

Topic 5: From Basra to Baghdad

The Basra offensive marked the first time the Shi’a-led Iraqi government seriously took on the problem of Shi’a militias, namely Sadr’s Jaysh al-Mahdi militia. Despite their shaky start, the Iraqi Security Forces, with important Coalition enablers, were able to reclaim vast swaths of Basra from militia control. Moreover, the Government of Iraq was able to reassert control of the economically vital ports and oil infrastructure and Prime Minister Maliki was able to improve his standing as a decisive and powerful leader. The residents of Basra are experiencing, for the first time years, a level of personal freedom denied by the Islamist militias. Yet, some important questions and concerns remain regarding the performance of the Iraqi Security Forces, the state of the enemy, and the sustainability of the security gains.

In an impressive mobilization of resources, the Iraqi Security Forces were able to muster roughly 30,000 troops to participate in the Basra operations. Iraqi soldiers and police were able to conduct complex counterinsurgency operations, with Coalition Forces functioning only in an advisory capacity. Still, the early weeks of fighting exposed serious challenges and shortcomings of the Iraqi Security Forces and the Government of Iraq:  insufficient staff planning; a reliance on Coalition Forces for close air support, other combat enablers, and logistical support; and lingering personnel challenges. These shortcomings are not unique to the most recent offensive. While Coalition and Iraqi forces aim to mitigate these problems, it will likely take significant time and effort to do so.

There is much still to be done in Basra. Corruption, a lack of basic public services, and high unemployment still plague the city. Many residents fear that the security gains, and the personal freedoms that accompanied them, are not permanent. Indeed, they are fragile and reversible. The operations in Basra did not fully eradicate Shi’a militias. The Jaysh al-Mahdi militia and Iranian-backed Special Groups have suffered heavy losses in Basra and their networks in the south have been disrupted; however, they are not entirely defeated. Rather, it is likely that have gone underground with the intention of evading the security crackdown, reconstituting, and resurfacing at a later point. Additionally, the Islamist political parties remain in power in Basra, and as such, they remain a threat to the historically moderate, secular order preferred by most Basrawis.

It is all the more important, therefore, to continue full-spectrum counterinsurgency operations in Basra—conducting both security operations and political and economic reconstruction efforts. Iraqi Security Forces must continue their offensive against the Shi’a militias and Special Groups—maintaining a permanent security presence in former militia strongholds, confiscating illegal weapons, and targeting criminal remnants. Furthermore, the Iraqi government must also make good on its commitments of reconstruction aid and payments for local security volunteers. Finally, the government should continue to engage those groups that have been excluded from the political arena, particularly the tribes, while strengthening moderate political forces. If upcoming provincial elections are to have any chance at success, the Government of Iraq, the Iraqi Security Forces, and their Coalition partners must work resolutely to consolidate security gains and improve economic conditions in Basra.