The Battle for Diyala 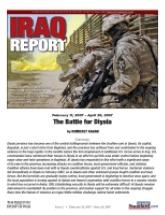 Diyala, one of the most chaotic provinces in Iraq, has become a central battleground between the Coalition and al-Qaeda. Prior to beginning major clear and hold operations in Baghdad, commanders attempted to control this area by reinforcing their troops. Al-Qaeda responded to this effort with significant surge of counterattacks. In spite of al-Qaeda’s surge, terrorists are losing ground, the local government is beginning to function, and the local population is turning against al-Qaeda. U.S. and coalition forces must, however, sustain their presence in Diyala to deter Iranian interference and prevent al-Qaeda from reestablishing control over the province.

Topic 1: How Diyala fits into Iraq

Coalition clearing operations reversed the trend of increasing al Qaeda control. Success in Turki Village and the destruction of al Qaeda’s emirate south of Balad Ruz turned the local population against the terrorist organization. As a result, sectarian violence has decreased. The local government has also begun to regain effective control over the province. Despite these positive strides, much remains to be done in Diyala and violence there will probably outlast the beginning of major operations in Baghdad.