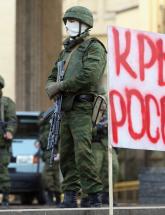 Russia poses a significant threat to the United States and its allies for which the West is not ready.  The West must act urgently to meet this threat without exaggerating it.  Russia today does not have the military strength of the Soviet Union. It is a poor state with an economy roughly the size of Canada’s, a population less than half that of the U.S., and demographic trends indicating that it will lose strength over time.  It is not a conventional military near-peer nor will it become so.  Its unconventional warfare and information operations pose daunting but not insuperable challenges.  The U.S. and its allies must develop a coherent global approach to meeting and transcending the Russian challenge.

[Download the full report here and the Executive Summary here.]

President Vladimir Putin has invaded two of his neighbors, Georgia and Ukraine, partly to stop them from aligning with NATO and the West.  He has also illegally annexed territory from both those states. He has established a military base in the eastern Mediterranean that he uses to interfere with, shape, and restrict the operations of the U.S. and the anti-ISIS coalition.  He has given cover to Bashar al Assad’s use of chemical weapons, and Russian agents have used military-grade chemical weapons in assassination attempts in Great Britain.  Russia has threatened to use nuclear weapons, even in regional and local conflicts. And Moscow has interfered in elections and domestic political discourse in the U.S. and Europe.

The Russian threat’s effectiveness results mainly from the West’s weaknesses.  NATO’s European members are not meeting their full commitments to the alliance to maintain the fighting power needed to deter and defeat the emerging challenge from Moscow. Increasing political polarization and the erosion of trust by Western peoples in their governments creates vulnerabilities that the Kremlin has adroitly exploited.

Moscow’s success in manipulating Western perceptions of and reactions to its activities has fueled the development of an approach to warfare that the West finds difficult to understand, let alone counter.  Shaping the information space is the primary effort to which Russian military operations, even conventional military operations, are frequently subordinated in this way of war.  Russia obfuscates its activities and confuses the discussion so that many people throw up their hands and say simply, “Who knows if the Russians really did that?  Who knows if it was legal?”—thus paralyzing the West’s responses.

Putin is not simply an opportunistic predator.  Putin and the major institutions of the Russian Federation have a program as coherent as that of any Western leader.  Putin enunciates his objectives in major speeches, and his ministers generate detailed formal expositions of Russia’s military and diplomatic aims and its efforts and the methods and resources it uses to pursue them.  These statements cohere with the actions of Russian officials and military units on the ground.  The common perception that he is opportunistic arises from the way that the Kremlin sets conditions to achieve these objectives in advance. Putin closely monitors the domestic and international situation and decides to execute plans when and if conditions require and favor the Kremlin. The aims of Russian policy can be distilled into the following:

Putin is an autocrat who seeks to retain control of his state and the succession.  He seeks to keep his power circle content, maintain his own popularity, suppress domestic political opposition in the name of blocking a “color revolution” he falsely accuses the West of preparing, and expand the Russian economy.

Putin has not fixed the economy, which remains corrupt, inefficient, and dependent on petrochemical and mineral exports.  He has focused instead on ending the international sanctions regime to obtain the cash, expertise, and technology he needs.  Information operations and hybrid warfare undertakings in Europe are heavily aimed at this objective.

Putin’s foreign policy aims are clear: end American dominance and the “unipolar” world order, restore “multipolarity,” and reestablish Russia as a global power and broker.  He identifies NATO as an adversary and a threat and seeks to negate it.  He aims to break Western unity, establish Russian suzerainty over the former Soviet States, and regain a global footprint.

Putin works to break Western unity by invalidating the collective defense provision of the North Atlantic Treaty (Article 5), weakening the European Union, and destroying the faith of Western societies in their governments.

He is reestablishing a global military footprint similar in extent the Soviet Union’s, but with different aims. He is neither advancing an ideology, nor establishing bases from which to project conventional military power on a large scale.  He aims rather to constrain and shape America’s actions using small numbers of troops and agents along with advanced anti-air and anti-shipping systems.

Such an approach involves four principal lines of effort.

Constrain Putin’s Resources.  Russia uses hybrid warfare approaches because of its relative poverty and inability to field large and modern military systems that could challenge the U.S. and NATO symmetrically.  Lifting or reducing the current sanctions regime or otherwise facilitating Russia’s access to wealth and technology could give Putin the resources he needs to mount a much more significant conventional threat—an aim he had been pursuing in the early 2000s when high oil prices and no sanctions made it seem possible.

The U.S. should also develop a counter-information operations approach that uses only truth against Russian narratives aimed at sowing discord within the West and at undermining the legitimacy of Western governments.

Delegitimize Putin as a Mediator and Convener.  Recognition as one of the poles of a multipolar world order is vital to Putin.  It is part of the greatness he promises the Russian people in return for taking their liberty.  Getting a “seat at the table” of Western-led endeavors is insufficient for him because he seeks to transform the international system fundamentally.  He finds the very language of being offered a seat at the West’s table patronizing.

He has gained much more legitimacy as an international partner in Syria and Ukraine than his behavior warrants.  He benefits from the continuous desire of Western leaders to believe that Moscow will help them out of their own problems if only it is approached in the right way.

The U.S. and its allies must instead recognize that Putin is a self-declared adversary who seeks to weaken, divide, and harm them—never to strengthen or help them.  He has made clear in word and deed that his interests are antithetical to the West’s.  The West should therefore stop treating him as a potential partner, but instead require him to demonstrate that he can and will act to advance rather than damage the West’s interests before engaging with him at high levels.

The West must not trade interests in one region for Putin’s help in another, even if there is reason to believe that he would actually be helpful.  Those working on American policy in Syria and the Levant must recognize that the U.S. cannot afford to subordinate its global Russia policy to pursue limited interests, however important, within the Middle East.  Recognizing Putin as a mediator or convener in Syria—to constrain Iran’s activities in the south of that country, for example—is too high a price tag to pay for undermining a coherent global approach to the Russian threat.  Granting him credibility in that role there enhances his credibility in his self-proclaimed role as a mediator rather than belligerent in Ukraine.  The tradeoff of interests is unacceptable.

Nor should the U.S. engage with Putin about Ukraine until he has committed publicly in word and deed to what should be the minimum non-negotiable Western demand—the recognition of the full sovereignty of all the former Soviet states, specifically including Ukraine, in their borders as of the dates of their admission as independent countries to the United Nations, and the formal renunciation (including the repealing of relevant Russian legislation) of any right to interfere in the internal affairs of those states.

Defend NATO.  The increased Russian threat requires increased efforts to defend NATO against both conventional and hybrid threats.  All NATO members must meet their commitments to defense spending targets—and should be prepared to go beyond those commitments to field the forces necessary to defend themselves and other alliance members.  The Russian base in Syria poses a threat to Western operations in the Middle East that are essential to protecting our own citizens and security against terrorist threats and Iran.  Neither the U.S. nor NATO is postured to protect the Mediterranean or fight for access to the Middle East through the eastern Mediterranean. NATO must now prepare to field and deploy additional forces to ensure that it can win that fight.

The West should also remove as much ambiguity as possible from the NATO commitment to defend member states threatened by hybrid warfare.  The 2018 Brussels Declaration affirming the alliance’s intention to defend member states attacked by hybrid warfare was a good start.  The U.S. and other NATO states with stronger militaries should go further by declaring that they will come to the aid of a member state attacked by conventional or hybrid means regardless of whether Article 5 is formally activated, creating a pre-emptive coalition of the willing to deter Russian aggression.

Bilateral Negotiations.  Recognizing that Russia is a self-defined adversary and threat does not preclude direct negotiations.  The U.S. negotiated several arms control treaties with the Soviet Union and has negotiated with other self-defined enemies as well.  It should retain open channels of communication and a willingness to work together with Russia on bilateral areas in which real and verifiable agreement is possible, even while refusing to grant legitimacy to Russian intervention in conflicts beyond its borders.  Such areas could include strategic nuclear weapons, cyber operations, interference in elections, the Intermediate Nuclear Forces treaty, and other matters related to direct Russo-American tensions and concerns.  There is little likelihood of any negotiation yielding fruit at this point, but there is no need to refuse to talk with Russia on these and similar issues in hopes of laying the groundwork for more successful discussions in the future.