The Fight for Mosul 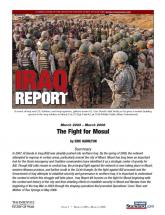 In 2007, Al Qaeda in Iraq (AQI) was steadily pushed into northern Iraq. By the spring of 2008, the network attempted to regroup in certain areas, particularly around the city of Mosul. Mosul has long been an important hub for the Sunni insurgency and Coalition commanders have identified it as a strategic center of gravity for AQI. Though AQI cells remain in central Iraq, the principal fight against the network is now taking place in Mosul, western Ninawa province, and further south in the Za’ab triangle. As the fight against AQI proceeds and the Government of Iraq attempts to establish security and governance in northern Iraq it is important to understand the context in which this struggle will take place. Iraq Report #8 focuses on the fight for Mosul beginning with the context and history of the city and then detailing efforts to establish security in Mosul and Ninawa from the beginning of the Iraq War in 2003 through the shaping operations that preceded Operations’ Lions’ Roar and Mother of Two Springs in May 2008.

Topic 1: Context and History of Mosul: Ethnicity, the Ba’ath Party, and the Army

Topic 2: From the Early Days of the War through the Battle for Mosul in 2004

Topic 4: The Enemy System in Mosul and the Strategy to Secure the City

The fight for Mosul will be long and will play out over several months. Coalition and Iraqi forces will likely employ a similar strategy to that employed in Baghdad with some key differences. While Baghdad was cleared with twenty Coalition battalions, there are only two in Mosul. The lion’s share of the burden will therefore fall on Iraqi Security Forces. As a result, the operation is likely to be much slower than if it were conducted by Coalition Forces. The Iraqi Security Forces are still building capacity and their shortcomings in logistics and supply have long been a problem in Mosul. This will be an important test to see whether a slimmed down Coalition Force can work with Iraqi Security Forces to create and maintain security in an area that is a sanctuary for a large number of determined insurgents.